Having just been relegated to the fourth tier in English football, yet more points deductions due, a new manager (Jimmy Quinn) and a national “credit crunch” (which Noel Gallagher described as “merely a breakfast cereal”), 2008 – 2009 was going to be a tough year for the Cherries. Renewing my season ticket at Dean Court wasn’t even a possibility – it was a certainty. I wanted to be there for my team at the toughest of times.

At the start of the season we had already done a pre-season away match at nearby Poole Town (a 3-0 win) and Dan Darch and I were planning to do “shit loads of aways” that season. In August 2008, that was indeed the plan. (What I didn’t know, and wouldn’t have believed you if you’d told me at the time, was that my first away match of the 2008 – 2009 season would be my last away match of the 2008 – 2009). In fact I didn’t even realise that until I started writing this report. As we arrived in Aldershot on a summer Saturday nobody would have believed that.

I had guaranteed myself a full year more living in Bournemouth, having signed the lease on a new flat to share with fellow Cherry fans Richard and Dan, plus Swiss Corinne. I started and ended the season working two jobs at the same time, despite changing jobs twice during the season. This kind of cut into my early season home and away matches attendance, and I recall missing the first 20 minutes of a home defeat to Macclesfield due to work (the ferry I worked on being late).
So I had a Saturday off in August and it had to be Aldershot away. Not only was it quite close by, but The Shots were making their league return as the newly formed club, having gone bankrupt in the early 1990s. ALdershot held a few random personal memories for me. One was a poster from a 1990 Match or Shoot magazine which adorned my wall back then, because it was of Aldershot player Ian Stewart. Ian Stewart not only played in the 1986 World Cup for Northern Ireland, but scored a 1-0 winner v. West Germany in 1982 and has the unique privilege of having Northern Ireland’s last ever touch of the ball in a World Cup (the final whistle blew in the Brazil match in 1986 with the ball at Stewart’s feet).
And plus my Dad had once travelled to Aldershot with work in the late 1980s, stayed near the football stadium and brought me back a toy Lego helicopter. Life had taken me on a journey since then, where I not only met Ian Stewart (at Belfast’s Belvoir Park) but booked myself on a train to Aldershot. With Dan, Austin and Neil.
I cannot be sure of this fact, but I have a feeling this was also Neil’s final AFC Bournemouth away match, as he would be off to Taiwan by the year’s end. Nobody really pondered on these things as we got ourselves a carryout and some snacks and boarded the 9.07 am train to Aldershot from Bournemouth station. We were quite hopeful of a result despite poor home form at the start of the season, but I had told Austin that Aldershot would lose only 5 home matches all season. He didn’t believe me and a bet was placed between us (later on, I won the bet, The Shots finishing comfortably mid table and losing exactly 5 home matches). 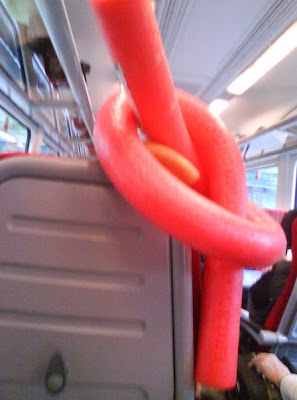 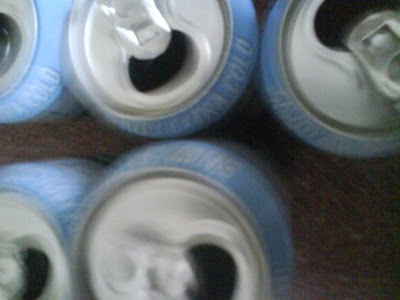 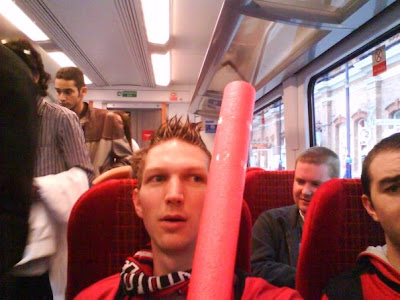 The train journey up involved foam red sticks, cider and the usual camaraderie. We didn’t head straight to Aldershot and had to change at Woking so a mandatory pub stop was penciled in for Woking. 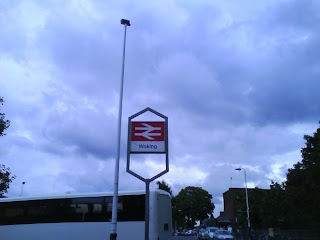 It was my first time in Woking and once out of the station we popped into the pub on the corner for a morning tipple at 11am, opening time.

The O’Neill’s opposite was shut.

Back onto the train to Aldershot and we meet an Aldershot fan, John, a big fan from the good old days and he promises to take us to a decent local pub. It’s exactly that. And furthermore contains some of the faces from Cherries away matches. John Nonny Red Army Garrard, Helen Bird and Steve Brown were all in there. A quick few jars in there and a scenic tour through the centre of the old town leads us to another pub,
This pub is busy and there’s a queue for drinks. It sounds French but it’s near the stadium. Again we get a big table with loads of regular Cherry fans and we start singing. The Northern Ireland flag is also unveiled (one of only 2 more appearances for it in my Cherry cannon of that decade). Carey Paton, Chris Manning, Serena and Dave Stone are all in there and the banter is quality. This was a bog standard “proper away day”.
Inside the stadium we were wedged into the corner area, almost 1,000 Cherries fans had turned up given that it was quite a close away match. To our right was the Aldershot hardcore, they were directly behind the nets. In an all terraced section, like ours. It reminded me of Colchester (Layer Road) except more old and worn, slightly deeper, worse views and generally a lot more shit. The standard of football wasn’t that great and former World Cup star Darren Anderton went closest to scoring time and time again, including a free kick.
The Shots fired in a 1-0 opener and we were on the back foot. A “fit Aldershot fan” had our area of fans looking over in admiration of her which seemed to be the most memorable moment. Maybe not for Patrick and Austin who found solace in an Aldershot pie. “Aldershot is full of shit” and other ridiculous chants filtered through our away end. Jimmy Quinn looked clueless then decided to bring on a beast of a striker, with a body like Frank Bruno or Emile Heskey, it was KKKKKKKKKKKKK who came on to smash in an amazing equalizer and send us all wild. That was as good as it got, and we finished with a creditable 1-1 draw. I was happy with that.
Post-match there were a few fights and a few Aldershot fans were chucking bricks at us, which caught the peelers by surprise. It calmed down very quickly though and we got on a train straight back to Bournemouth. A few more beers were had on the way home, and the night was also eventful.
My room mate from Germany, Mona came out to the pub The Moon In The Square, as did my mates from London who came to stay with me that weekend – Steve and Flavia, from New Zealand and Brazil. Millwall Neil and Austin were also there right to the death and I was up rise and shine for work the next day, dropping Neil off home on the way.
I moved flats a few weeks later to stay with Dan for the duration of the season in a great place in Southbourne. But somehow life was to take a turn for the worst for Ulster Cherry and this match incidentally was my last happy away match of that era. Almost four years have now elapsed and I’ve been to just TWO away matches in the intervening time, witnessing two defeats. So Aldershot remains my last away point as a Cherries fan.
Apart from thanking the usual suspects that went to Aldershot, I’d like to also thank my Dad for that Lego helicopter and Ian Stewart for beating the West Germans. It was a nervous Aldershot sunset, but this old world still looked the same.
Who – Dan Darch, Jonny Blair, Millwall Neil, Austin Sheppard, Patrick Hogan
Where – The Recreation Ground, Aldershot
Pubs Visited –
Nationalities On Display – Welsh, English, Cornish, Northern Irish, New Zealand, Brazilian, German
Score – 1-1
Join 15,017 Monthly Readers! If you enjoyed this article and LOVE travel and SAVING money, get e-mail updates from Don’t Stop Living – a lifestyle of travel! (It’s Free) 😉 Jonny