“We won’t forget our Belfast boy, who filled our lives with so much joy” 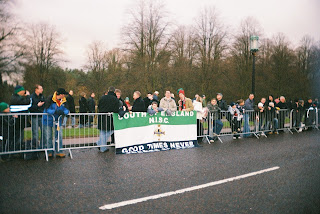 George Best was the best football player ever. He was also the fifth Beatle. He was also a total hit with the ladies and basically the first superstar footballer. When I was a kid, my Da always used to talk about how he saw George Best play live, and in particular the time when he lobbed the ball over Gordon Banks to head the ball home at Windsor Park in a Northern Ireland 1-0 home defeat to England. Yes somehow that goal of pure genius was disallowed. That was the genius of George Best. I never saw him play sadly, though I did ‘meet’ him twice. Once was in 1997 at Windsor Park, Belfast when he turned up as a spectator for a Northern Ireland v England veterans match. Everyone ran over and got his autograph, George duly obliged. I didn’t run over, as I already had his autograph on an old book called ‘Best of Both Worlds’ and that was enough for me. I also met him once when I was at a petrol station in Newtownards, Northern Ireland. I was in my Da’s car as he filled up petrol, and there was George and Alex (his wife) also getting petrol and a paper. It was not really a shock to see George Best filling his car up with petrol. A few months before that my Mum and Dad had met him in Homebase, Bangor, Northern Ireland. George was in choosing some wallpaper for his new house near Portavogie. In many ways George was just an ordinary person living an ordinary life. However, he had an amazing talent. He was a footballing genius! On my travels I have been reminded of the legend of George Best a few times notably at Bestie’s Bar in Los Angeles, USA but also in the George Best Bar in Bled, Slovenia (which is also a backpacker’s that I stayed at). 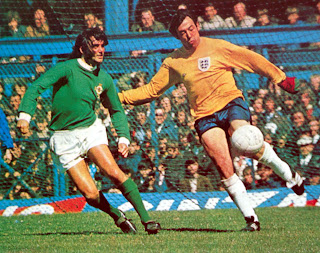 George grew up in Burren Way in the Cregagh Estate (a post-war working class Protestant, British council estate in Northern Ireland’s Belfast capital). From an early age it was obvious that he had a football talent. There are many and various books on George’s life and times, so I won’t go into it all. I have read many books on him, the best being BLESSED which was his official autobiography. The Cregagh estate is where my Granny, Mary Blair currently lives and my Da spent some time living there, so I feel a huge amount of admiration and understanding for George. My Granny still speaks to Dickie Best (George’s Da) all the time…there’s a wee piece below that I wrote back in 2005, having attended George’s Funeral. George’s legacy lives on with a large mural of him overlooking the football pitch in the Cregagh Estate, a few other murals in and around Belfast and the George Best Belfast City airport. Renamed in his honour…

There I stood. Proudly in my Northern Ireland football shirt and AFC Bournemouth scarf paying tribute to the world’s greatest player on his final journey. I was one of 30,000 inside Stormont Grounds in East Belfast on Saturday 3rd December 2005 paying my last respects to George Best. It’s the only time I’ve ever had to queue for 2 hours to get into a funeral. The sky around bucketed all morning drenching us in rain, but no-one seemed bothered. Someone called it Belfast tears. There were certainly plenty of those about. In a moving ceremony, George’s son Calum, sister Barbara and long-time friend Dennis Law all gave emotional speeches to the thousands in the audience, and the millions watching around the globe. It was a fitting tribute to a man who loved life and became a legend in a city which George united more than divided. 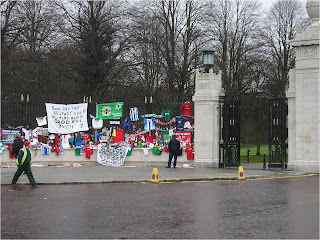 In The Beginning: The Early Years

George Best grew up in the same East Belfast estate where my Granny still lives: Cregagh. George was born in 1946, and from the age of 2 always had a ball at his feet. Having starred locally for Cregagh Boys Club and Boyland, George was scouted by Bob Bishop of Manchester United at the age of 12, along with Eric McMordie. The talent was always there, but coaches at local clubs Linfield and Glentoran felt George was too skinny to ever make it. The slim Belfast Child was even considered too thin to make it at Manchester United. How he proved them wrong. Hopefully this wee article will give you a thorough insight to the life and times of Georgie.

On The Field: The Genius

George’s football career spanned 8 different countries and 18 different clubs, as well as representing Northern Ireland 37 times and a string of one-off testimonial and celebrity appearances in Northern Ireland and England (his last being in 1994 in Belfast). He made his Man United debut against West Brom in 1963 and scored against Burnley on his second appearance aged just 17. From then on, this shy Belfast Boy blossomed into a world superstar. In the same season, Georgie won his first cap for Northern Ireland in a 3-2 win over Wales. Only a shambolic 1-1 draw in Albania prevented Northern Ireland qualifying for the 1966 World Cup; a competition that George would never feature in. His greatest game for his country came in 1967, when he single-handedly destroyed Scotland in a 1-0 win in Belfast. However his finest triumph was in 1968, when he scored in the final of the European Cup, as Man. United beat Benfica 4-1. That year George was European player of the year, aged 21. George’s career at Man United never reached the heights of that European glory again after that, however he did score 6 in an 8-2 win at Northampton Town in 1970, still an FA Cup record. Following a few “no-shows” for Man United and a suspension by Tommy Doherty, George Best finally left Man United in 1974 for Dunstable Town.

I doubt there has been any further fall from grace than that; George had been in the limelight for so long and he just wanted a break from his superstar fame. In his time at Dunstable he played against Luton Town, Cork City and famously starred in a 3-2 win over Man. United reserves. The Dunstable fans still have a place in their heart for George, who paid for new nets at Creasey Park out of his own pocket. From then his football career was as wide and varied as anyone’s. He played for Fulham, Hibernian and Cork City, before ending his League career right here in Bournemouth in 1984. Aside from this, he famously nut-megged Johann Cruyff for Northern Ireland in a 2-2 draw in Holland in 1976, and played with Pele in the US Soccer League. In the 80s he made one-off appearances for teams in Northern Ireland, mainly guesting at testimonials. When George made his first (and only) Irish Cup appearance for Tobermore United in 1984, he told the Belfast Telegraph: “I play for fun now”. When did he ever do anything else? 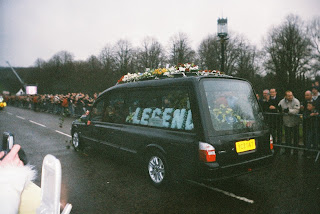 Off The Field: The Fifth Beatle

George was the world’s first footballer to become a tabloid superstar. His talent on the pitch, with his dribbling and an eye for goal had teenage girls screaming his name, but it was his glamorous life off the pitch earned him a playboy image. He opened boutiques in Manchester in the late 60s and was idolised by ladies all over the world. It was his dress style, his manly stubble and his Beatles-esque haircut that made him a hit on his nights on the town. Of which there were many. George once told a reporter “I used to go missing a lot…Miss World, Miss UK, Miss Sweden…”. He dated a Miss UK in the early 70s (Carolyn Moore), Miss World in 1973 (Marjorie Wallace) and had a string of other romances which the British tabloids quickly made front page news. In the late 70s he finally married Angie James and moved to the USA to escape the paparazzi press. They had a son, Calum, but the coupled divorced in 1984, when George was sent back to the UK to rehabilitate. While over here, he ended up meeting former Miss World Mary Stavin and falling in love. He lived life to the full, and enjoyed himself off the field. Although Calum is regarded as his only son, George has revealed that he did have two other daughters through his flings that he never met. Guys wanted to be able to pull like him, girls wanted to pull him. Through his good and bad times, George was almost the perfect gentleman. Never refusing an autograph or turning down a drink with an admirer, speaking of which… 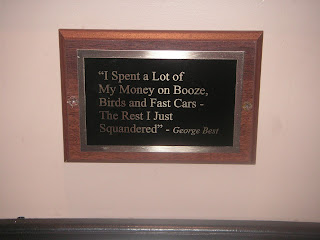 In The Bar: The Alcoholic

George’s Mum Ann died of alcoholism in the 70s, and George’s long struggle with the drink in the end shortened his life. The only person George ever blamed for his alcoholism was himself. He struggled through the 70s and also a drink drive charge in the 1980s. After many hospital visits and a liver transplant, it was inevitably George’s drinking that let him down. The only flaw in the life of a legend. If there’s a bar and a football pitch in heaven, you’ll find George halfway between a football and a double whiskey…

To finish this article in the words of George Best himself:

“Pele called me the greatest footballer in the world. That is the ultimate salute to my life.”