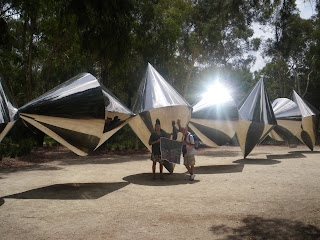 There are so many FREE things to do in Canberra I was finding it hard to believe. On the north side of the city, where the Parliament lies, beyond lake Burley Griffin, there are all the National Buildings of Australia. This part of the city is so obviously artificial and manufactured that it could easily be classed as cringeworthy or over elaborate. Yet there was I loving it. Canberra feels safe. There cannot be much crime, and there certainly arent any steeks or spides hanging around buildings such as the National Museum and Art Gallery. We had time to do both, even if the museum would be a bit of a rush, as they all close at 5.30 pm. The day was a busy one, and saw us visit FIVE totally FREE things to do and see in the capital city 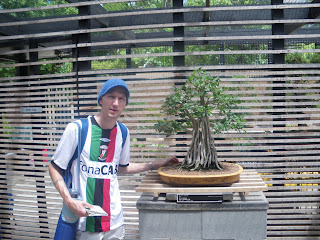 And that day we had already been to the Bonsai Display gardens. This was situated in Commonwealth Park on the south side of Lake Burley Griffin. As Daniel said “Ever seen the Karate Kid?”. There was no sign of Mr. Miagi here, but there were plenty of Bonsai trees on display. Its known as the National Bonsai and Penjing Collection of Australia. A leaflet I picked up describes it as “First Garden of the Canberra International Arboretum and Gardens.” Its a very small room enclosed inside a fence with a collection of various miniature trees. It was the first time I’d seen something like that. 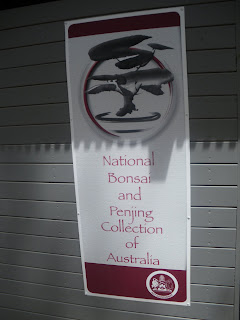 I was hardly blown away by the collection, but it was interesting and different to see. They trim the trees with scissors, or secataurs (not a dinosaur), and the dude who let us into the exhibition was trimming as we browsed. From there we enjoyed our second free experience of the day, the Sunday performance chimes of the National Carillon (covered…..elsewhere on here) and across the bridge to where the Art Gallery is the first main building. 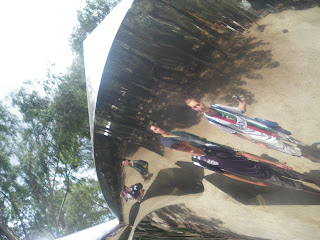 We walked past a wee restaurant on the way to the National Art Gallery and I saw a few large pieces of paper with art on them, I quickly grabbed two of them. They were probably not free, but there was nobody attending to them so I helped myself. The two paintings were the same, both by Claude Monet so I gave one to Neil and kept the other one for my collection. A memory of a free day out in the hot Australian Capital. We were all in shorts and sweating. The sun wasn’t apparent, but in Australia you have heat without seeing the sun. 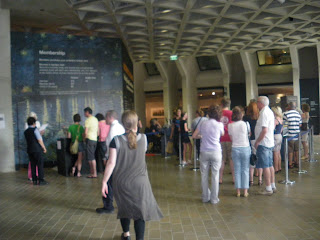 We lingered in the gardens outside the National Gallery, where there are a few outdoor sculptures that somehow survive the rare quantities of rain which fall here. Once inside the main building we see a large queue for the “paying section”, we didn’t particularly fancy paying to get into the special section of the gallery, so we decided to do the free parts. We had to hand our bags in and headed through into the main hall. 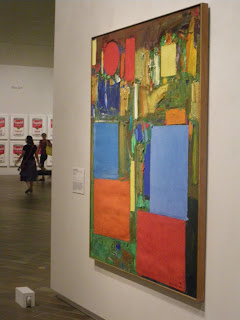 I admire art and I find it fascinating to look at art, however I am a critic and a cynic and some of the art on display was absolutely atrocious, very immature and not the sort of art I like. I prefer real paintngs of real things! Not bits of paint thrown any old way onto canvas or cardboard. Some of the paintings were excellent however and I photographed some of the ones I liked even though cameras are banned and I got told off at one point. 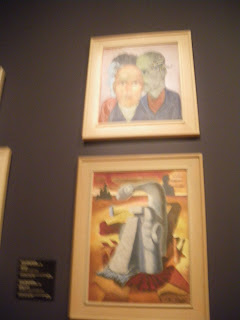 There was a painting of a bald dude in one of the rooms and Daniel and laughed how it looked like Lex Luthor from Smallville, the Superman prequel we’d been watching lots of in Parramatta. I also liked the art with words and lyrics on them and I picked out a painting called Imants Tillers – Terra Incognito, with many quotes on it, one I liked was “I named the hill mount hopeless.” I write a lot of poems and songs (I’ve written over 100) and this will give inspiration to a future poem. 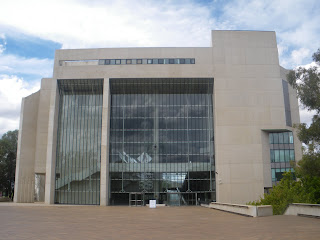 Water Lily by Claude Monet was another of my favourites from the exhibition, plus silver models of men’s willies, constructed by a lady! We spent over an hour in there, also watching part of an art film and then we walked over towards Commonwealth Avenue. This is where two guys saw my shirt and stopped me saying “we had a bad result yesterday,” I was shocked and didn’t know what it was about, but I was wearing my Glentoran shirt, and these were two boys from East Belfast, fellow Glentoran fans! Outside Canberra’s parliament buildings I bump in till two Glenmen! 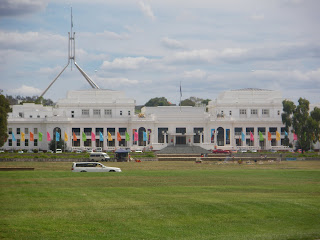 I didn’t catch their names and they seemed in a hurry, so we didn’t ponder long. One was a brave bit older and was only in Australia on holiday, the other was a permanent Aussie resident now. There we were briefly re-living that genius moment by Johnny Jameson in a European match at the Oval in days gone by… It was getting near 3 pm and we knew that the Australian National Museum closed at 5 pm, and it was a fair walk away so we had to hurry if we wanted to see a good bit of the museum. I should also add that it was our last day (for this lifetime anyway) in Canberra, Australia’s Capital City, so we wanted to do everything we could before that night bus left for Melbourne. 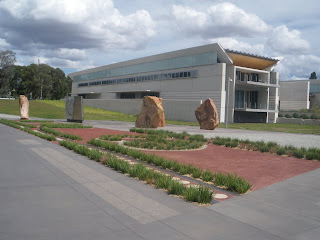 Again the sun’s rays bate down and we were all hot and sweaty in the humidity. The walk would take us past the old Parliament (a white house, but not the sort of one that Barrack Obama would live in), and past Lake Burley Griffin yet again. I got used to the peaceful and tranquil air at Canberra’s central lake. We walked along Commonwealth Avenue, the bridge that takes us back into the “City” area of Canberra, rather than the “Government” area. We turned left at Acton Park, past where Daniel and I had a tin of beer each on the first night in Canberra. 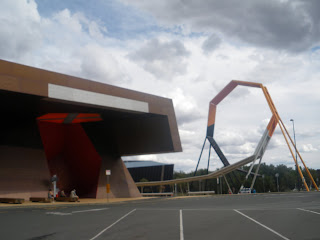 From there, a long U shaped walk would take us to the museum, which is The National Museum of Australia and is totally free to enter. The Museum is very inconveniently situated at the end of a mini peninsula (known as Acton Peninsula) in the Lake. The street is Lawson Crescent, the Museum looks big and is visible from most points along the side of Lake Burley Griffin. On this ocassion I didn’t particularly enjoy the walk, I had my bag with me, with most of my stuff in it (the hostel wouldn’t let us leave our bags there after we’d checked out, so me and Daniel hid our bags in a spare room, but I didn’t want to leave my valuables there, so took it with me). 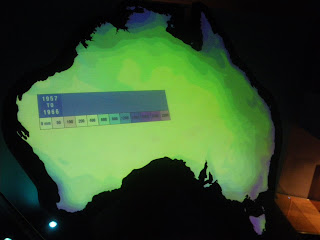 Through a waterside park and up a hill and there was the National Museum. Some weird modern art sits in front of the Museum, itself a stylish building. Clean, tidy, elaborate and unbusy, there stands the National Museum of Australia. We went in, handed our bags in, and were given a map and guide, and also told “you have an hour left till closing time”, well we knew it was a bit of a rush. But it would be worth it. Our fourth free thing of the day. 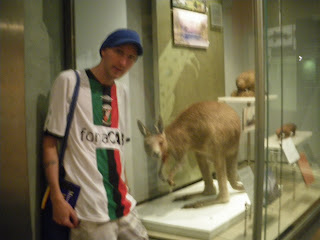 The museum has 3 floors, and in 60 minutes, we managed to see something on each floor, and did a quick whizz round most of it. Splitting up at times, Daniel and I first watched a 15 minute film on the history of Australia, it wasn’t amazing, but was relaxing and informative. Then we saw the aboriginal section, with all those weird musical instruments, that was on the next floor. I saw a stuffed kangaroo there. It was my third sighting of a kangaroo in Australia, but none of them count cos they’re not real sightings (1. On a field from the train at Emu Plains; 2. In a packet to be cooked for dinner; 3. A stuffed kangaroo in the museum). 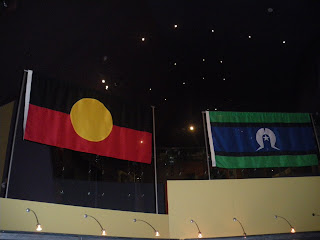 There was a duck billed platypus there as well, stuffed of course. There was information on all the weird Australian animals and wildlife, then came a section on Australian history, where Britain featured heavily, obviously. There was also a lot of the Aboriginal history stuff, where names and places such as Aranda and Parramatta are aboriginal words. The Aboriginal flag was also there, hanging above. Then in the most random location ever….I saw a mini radio studio! No kidding! 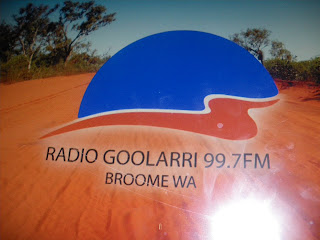 I said to Daniel, “I used to be on FM radio, and university radio, get me back in there!” I assumed it was just a display, but it was actually a room you could go into, so in I went and took a seat in front of the radio microphone. It was just like being back on Nerve Radio (This was January 2010, my last show on Nerve Radio would have been May or June 2008). 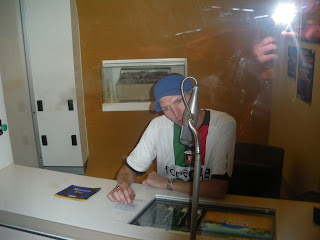 What was even better was you could actually talk into it, use the controls and make a recording and then listen to it. So in Daniel came, and I hit record, doing a spontaneous radio link. 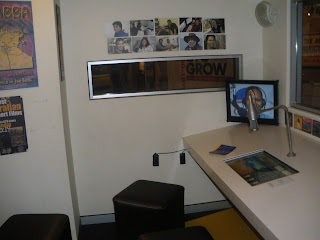 It wasn’t very good, as a radio DJ I used to plan, as it’s better to have an idea of what you’re going to say. I still enjoyed it, and make a video of it for my memory. I was on Radio Goolarri, for a few minutes only. In my head. 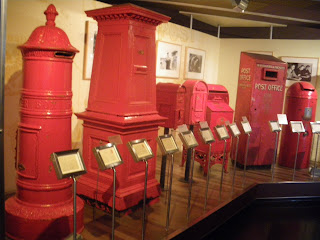 In this technology section of the museum, they delved into radio, TV, sports and even the post office. They had old post boxes on display, which all looked similar to UK ones, the Queen also appeared on many of the bank notes in the history of the Australian Monetary System section. Why not the Australian Pound?? (I never even found out…) 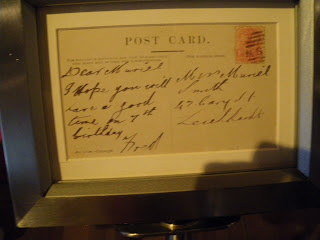 Though they used to call the currency a “Royal” , when it was the Reserve Bank of Australia, and there were bank notes for “shillings” and “pounds” from back in the day. Who knows when it changed and why. Plus in the Post Office Section there was a letter addressed to a Miss Muriel, which is my Mum’s name, and a large collection of stamps. 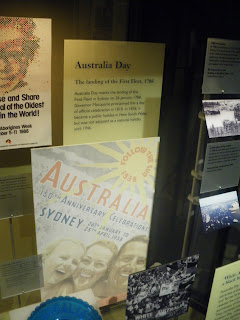 Our final moments in the Museum were spent looking at the history of Australia Day, which had happened earlier that week and marks the landing of the first fleet to Australia. I’m pretty sure we were the last customers to leave the museum that day. Our day of free things was not yet over, we still had a Music Festival to attend to…
Who Went – Jonny Blair, Daniel Evans, Neil Macey
What Was It? – Commonwealth Park, National Bonsai and Penjing Collection of Australia, National (Art) Gallery of Australia, The Old Parliament, Lake Burley Griffin, National Museum of Australia
NATIONAL BONSAI GARDENS:
BOOMERANGS AT THE NATIONAL MUSEUM OF AUSTRALIA:
AUSTRALIA DOCUMENTARY AT THE NATIONAL MUSEUM OF AUSTRALIA:
JONNY BLAIR ON THE AIR AT RADIO GOOLARRI, CANBERRA:
WALKING ROUND LAKE BURLEY GRIFFIN TO THE NATIONAL MUSEUM OF AUSTRALIA:
Join 15,017 Monthly Readers! If you enjoyed this article and LOVE travel and SAVING money, get e-mail updates from Don’t Stop Living – a lifestyle of travel! (It’s Free) 😉 Jonny