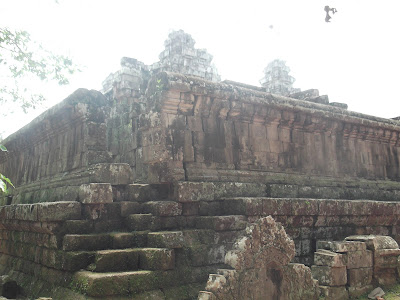 The Angkor Temples Tour in Cambodia could literally have you traipsing round temples for weeks on end. I visited over 10 temples in three days, on the middle day – I was with Anthony and Helen from Cork – great travel buddies for some of Laos and most of Cambodia. Indeed we toured Vientiane and Don Det together, crossed the border at Traiping Kreal and also endured the Killing Fields and Tuol Sleng experiences together. 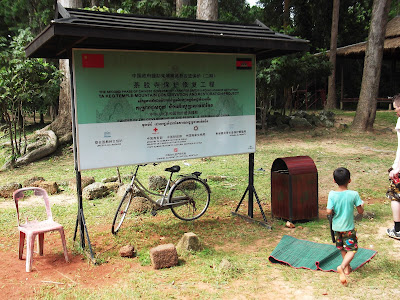 And so after lunch we arrived at Ta Keo – it was one of the last temples on my second day of the temple tours. 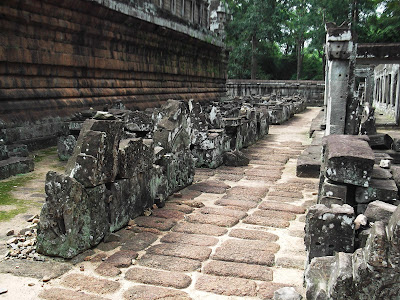 Out of all the temples I saw in Cambodia, Ta Keo was the most ruined. It had clearly aged badly over the years and suffered from possible storms and earthquakes as it was in poor condition. 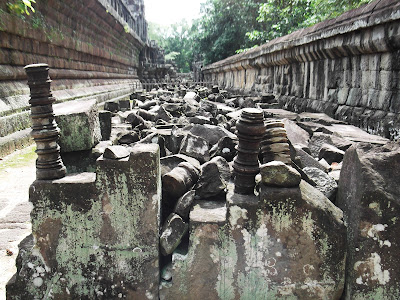 These concrete pillars looked the part but they were clearly unstable – Ta Keo being a crumbled wreck of a temple. I had a laiugh about that – Ta Keo is a “ruined temple” and in 2009 Daniel Evans and I visited a “ruined castle” in the Blue Mountains in Australia. However the “ruined castle” in the Blue Mountains turned out to be “just a load of bricks on the top of a steep hill” so Dan and I were disappointed. Here, Ta Keo was slightly more impressive. 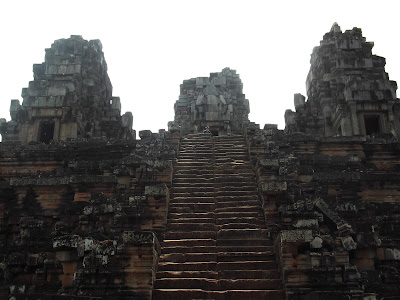 Despite Ta Keo being in bad condition, this didn’t take away from the experience of seeing it – in fact I’d argue it added more to the experience – given that each temple had its own appeal and merit. Ta Keo’s appeal was actually the fact that some of it had crumbled. And had been left like that! 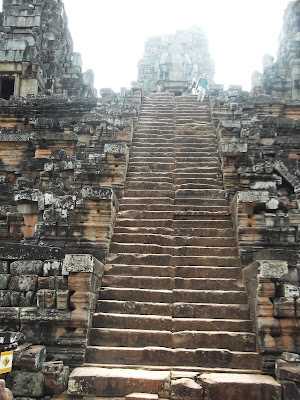 At first I thought I couldn’t be bothered going up to the top of Ta Keo but Anthony had gone ahead so I went up anyway, meaning I went into almost every part of each temple I saw on the tour. 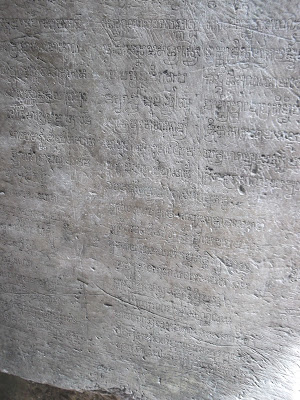 There was some ancient writing on the very smooth walls. Erosion and lack of knowledge of local language prevented me from deciphering its meaning. 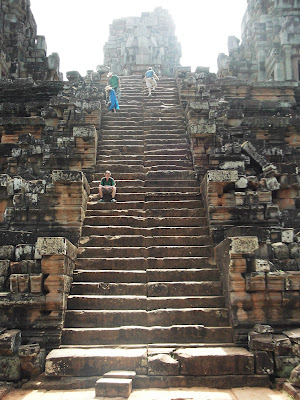 Sitting on the steps on the way up to the top of Ta Keo. 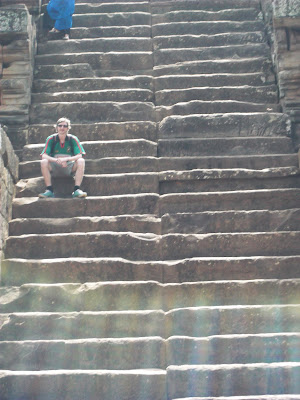 Close up – Ta Keo temple. A Hindu Shiva temple this, dating back to the late 10th and early 11th century. This is a high towering temple with less pattern than the others – lumped rocks building it up to a decent height. 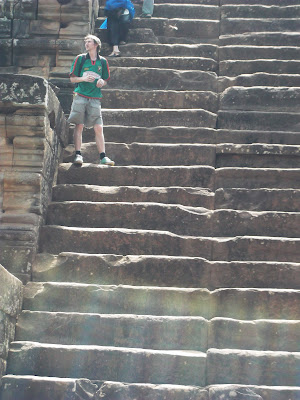 On the walk up – I was expecting a decent view from the top of Ta Keo. 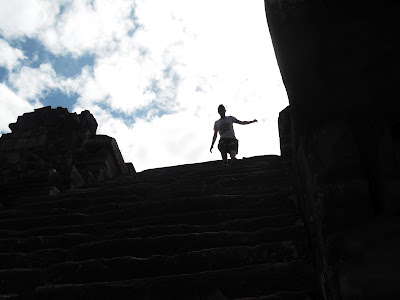 I got Anthony coming back down as I was going up! 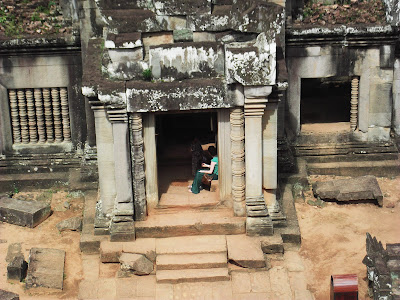 Looking down from the top of those steps in the previous few photos. 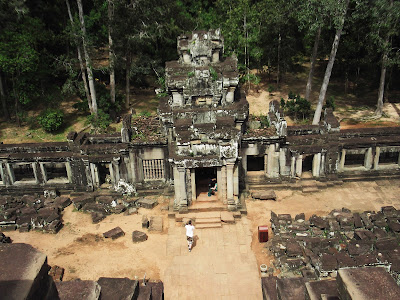 It certainly was built to be high, the reason for which I was baffled by as there was nothing to look at. From this vantage point only trees were on view. Perhaps, I thought, the trees arrived after the temple. 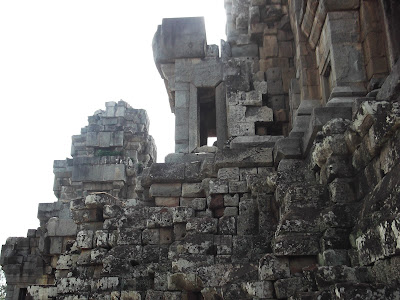 You can see evidence of the temple crumbling – even from this photo you can tell they have done a lot of reconstruction work on it. 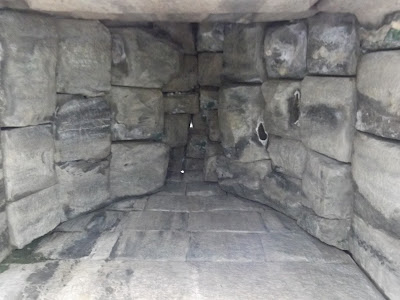 Looking up to the peak in the highest tower in Ta Keo. Basic rocks, little design and carving. I never was a temple enthusiast, but you do notice these things, or lack of them when you see so many temples! 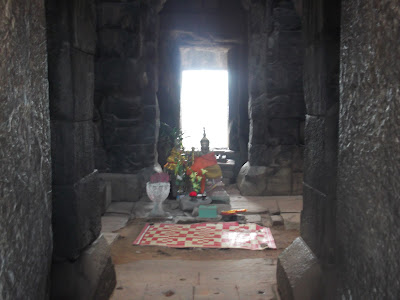 Chance to pray. As I mentioned a Hindu Temple this one. 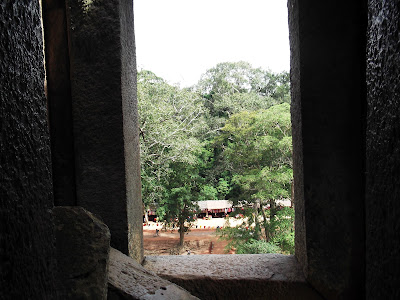 The best view I could get from Ta Keo – down onto the market nearby and endless trees. 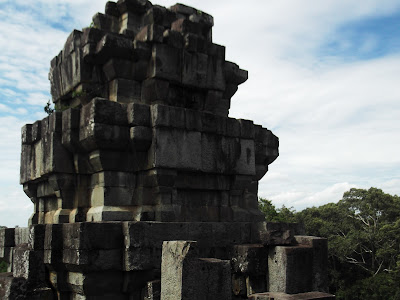 The top of Ta Keo. 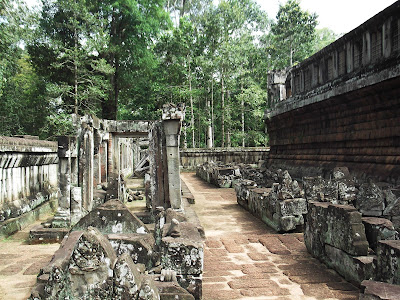 A final shot from the bottom by the entrance.
Temple – Ta Keo
Constructed – Late 10th – Early 11th Century
Religion – Hindu (Shiva)
King/Patron – Jayavarman V
Style – Khleang
Key Song –
PINK FLOYD – CRUMBLING LAND:
My Videos –
TA KEO TEMPLE RUINS:
AND FOR OLD TIMES SAKE, THE VIDEO OF THE “RUINED CASTLE” IN THE BLUE MOUNTAINS IN AUSTRALIA IN 2009:
STEEP TREK UP TO THE “RUINED CASTLE”:
CLIMBING TO THE TOP OF THE “RUINED CASTLE”
VIEW OF BLUE MOUNTAINS FROM TOP OF “RUINED CASTLE”:
Join 15,017 Monthly Readers! If you enjoyed this article and LOVE travel and SAVING money, get e-mail updates from Don’t Stop Living – a lifestyle of travel! (It’s Free) 😉 Jonny