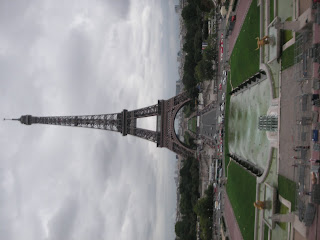 Backpacking in France: Walking up The Tour Eiffel, Paris

Its one of them there famous world landmarks that you should really visit, and climb. Or so obvious people say. I’m going to be very obvious here. At the wrinkled age of 27, I finally made it to Paris and set about seeing the sights of the city and the obvious trek to the Tour Eiffel. I arrived there initially by train, and twice on two separate days, meaning the first day I didn’t really see Paris, as I got off at train at Gare Du Nord and headed south to Marseille, before getting hardly any sleep and ended up coming back at 6 am the next morning, where I got a guided tour of Paris from Charlotte, my French friend from Bournemouth some 3 years earlier. 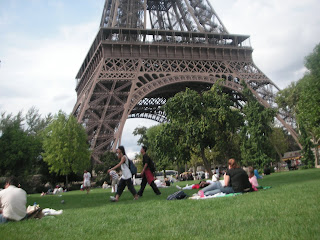 Anyway fast forward a few days past my trip to Marseille, that excellent TGV journey and my guided tour of Paris (without the obvious Tour Eiffel) and I was meeting my mate Rene once again. Rene was another friend from my time in Boringmouth, and he came from Germany (the former East, in fact). Rene and I stayed in a hotel at Epinay Sur Seine together and hooked up with two American travellers. Rene’s girl for the time, Erin was much more into him, my US lady, Trisha didn’t quite want to be with me, though we did enjoy some kissing. Thats another story, but as it happened, all four of us were together and decided we should do the Eiffel Tower together. None of us had been in Paris before and it was time to explore on our last full day together. 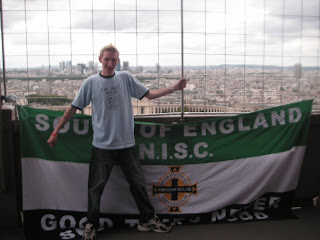 Rene helped me greatly that day, walking all the way to Republique with me to help me check in to my hostel for the next few days. Then we got delayed slightly, I didn’t have a mobile phone, but Rene did, and he had Erin’s number so let them know that we would meet them in front of the Eiffel Tower and join the queue to go up. I was rather excited as we boarded the metro towards Tour Eiffel, which has a nearest stop of “Champ De Mars”, I like this aspect of big cities. The fact they don’t name the train station or stop after the famous monument there. IT avoids business and queues. Its the same in London, where Trafalgar Square station stop was re-named and even possibly moved and blended into just one stop, at Charing Cross, which on one line at least says “For Trafalgar Square”, I thought of this on the metro journey to Tour Eiffel and liked it. There was another quick surprise for me on route. 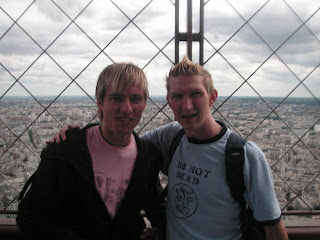 And that was the FFF, the French Football Federation offices were situated near the Eiffel Tour and on the walk from Champ de Mars. Naturally I had to pose for a photo outside it. Then it was off past “looky looky men” and tramps as we made our way up dirty roads towards the Eiffel Tower. It was near a bridge by the river Seine and away from the main city centre. When I see famous monuments like this, I am often surprised at their simplistic locations. There, in New York was the Empire State Building, casually next door to a McDonalds, and here by a park on the edge of central Paris, stood an amazing sculpture – a work of art which needs to be seen, the very very bronze, brown, old and dirty EIFFEL TOWER. 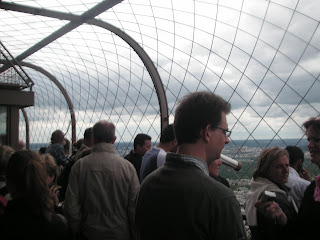 A few minutes later we had found Erin and Trisha and agreed on prices to go up. Rene and I decided we would go all the way to the top, I wanted to see the best view and it was only around 7 euros if I recall correctly. And also just to say I did it! Once we joined the queue, we were at the walking end, nearest the river Seine. This suited us best, as the walking end saves you money. The walking end means basically you just walk up the steps on one of the corners of the tower, until you are at the base level, which is the first point on the tower. To go to the summit, there are two more levels, with two lifts. The two girls stopped at the first level, which was still amazing. 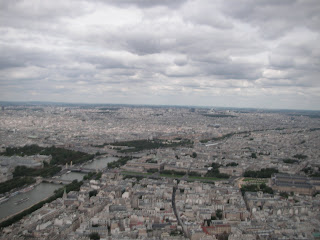 It was a mild day, and quite hot and you could see a lot from the first level. Its amazing that is is made from iron. It is rusty, has graffiti, looks brown and bronze. It is not silver in colour! That is a myth, maybe it once was, or maybe they repaint it sometimes, but when I went it was rusty brown, as the photos should show. Trisha and Erin didnt want to go any higher, so Rene and I joined the massive queue to go to the summit. This took forever and at one point we thought of quitting and heading back, we didn’t want to leave the girls waiting. 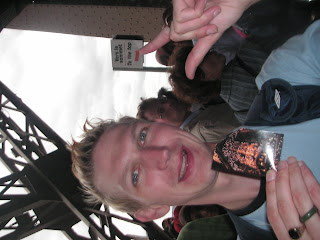 Eventually we got into the lift and were right at the top, well worth it for the experience the awesome view, the silence and just the amazement that humans once made this building. Gustav Eiffel was the main man, hence the tower’s name, and there is not a structure quite like it in the world. I again felt in awe of the world as I gazed down on a busy summer Paris, taking photos, some with my Norn Iron fleg, and some of the views which were spectacular. What an experience! 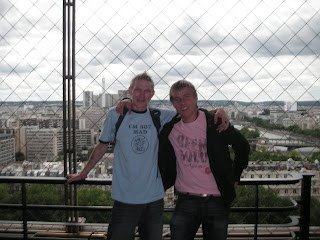 Rene was right though, we only spent about 15 minutes at the top, the girls were waiting so we got the next lift back down. Nothing was scary, the height thing hadn’t bothered me, and I have now done the Eiffel Tower. I don’t know if I’ll need to do it again sometime, maybe just with someone special, or at night for a different experience. We went up around 2 pm I think. After we caught the lift back down (2 lifts actually there were two upper levels, I think!) and the girls were waiting. We had to walk back down again because we bought the cheap ticket, but this was OK! 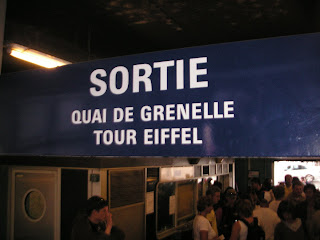 Soon we had retired to the park to drink water and eat croissants and sweets in the French sun. I lay down my SOE NISC fleg on the grass and we lay on it, as life was good at the time. I really did fool myself back then. Life is not always as good as it was back in 2007, the day I did the Tour Eiffel in Paris. It’s world famous you know, now go there and do it! 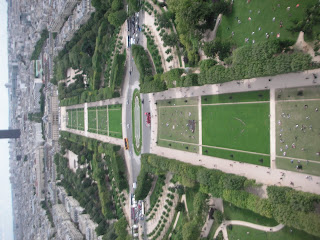 I haven’t seen Rene or the two girls since, though hopefully we all keep fond memories of the day we did the Eiffel Tower, Paris, August 2007.

My Advice – Walk up (if you’re able to) the first bit and then get the lift to the summit. Its good value.

Don’t – Buy anything from the “looky looky guys” around the tower or buy anything inside the restaurant/bar on the actual tower itself. Unless you’re loaded with money!

Is it not just OK to take a photo from the outside instead of paying to go up it? – NO, GO UP IT!!

Me at the top of the Eiffel Tower:

1 thought on “Backpacking in France: Walking up The Tour Eiffel, Paris”