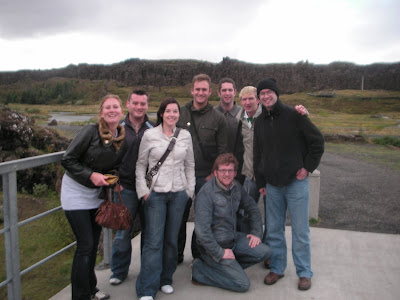 Pingvellir/Phingvellir/Thingvellir (Google that one people) is a beautiful little place in the South of Iceland. There are no houses there and no people! But it has some relevance. The Icelandic government was formed here in 1845 by a Danish King. Next to it lies a little river where people were hanged back in the days. Some beautiful scenery places Pingvellir in the top places I’ve ever seen. The lakes nearby and the montains of grass are breathtaking. 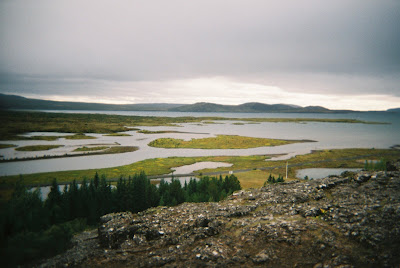 According to the Lonely Planet, the best way to see Iceland is on foot. It would take you forever, so I’d recommend the ‘Golden Circle’ cruise. Nothing is golden, nor is it a circle. But an Icelandic guy will take you the entire way round the South East corner for about £50 (Thousands of Icelandic Kroners). 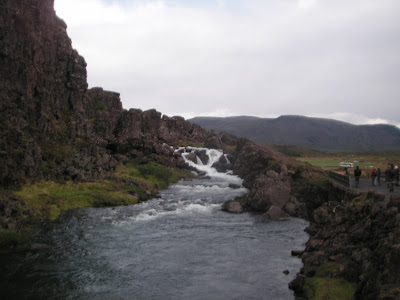 At Pingvellir there is a small museum with TV screens and then you simply walk past the lake, the location of the Icelandic Government foundation (complete with Iceland fleg). Then its past another small river and back into mundane countryside. Dont go in a shorts and t-shirt. It’s bloody cold!
Bars Visited – None.
Beers Tried – None.
Transport Used – Car.
Nationalities Met – All tourists mainly from the UK and Europe.
Strange Currencies – Icelandic Kroner.
Where I Stayed – I didn’t and you won’t either as it’s in the middle of nowhere and simply a stop on the ‘Golden Circle’ tour.
Average Price of a Pint of Beer – They don’t sell any at Pingvellir.
Favourite Food – I didn’t eat.
Favourite Drink – Water.
Favourite Thing About Pingvellir – The fact it’s in the middle of nowhere.
Moving Moment – The wind blowing me by this massive lake on a cold day.
Key Song – Fat Les – Vindaloo to the tune of Pingvellir…
FACT – Iceland is the fifth most productive country in the world based on GDP per capita at purchasing power parity. It is also ranked second on the 2006 United Nations Human Development Index.
Join 15,017 Monthly Readers! If you enjoyed this article and LOVE travel and SAVING money, get e-mail updates from Don’t Stop Living – a lifestyle of travel! (It’s Free) 😉 Jonny