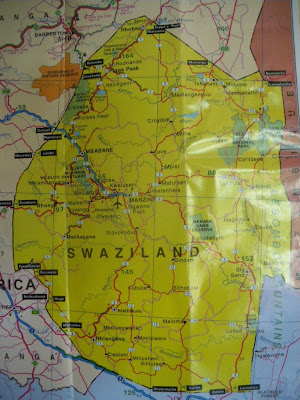 Mbabane! The capital city of….which country? You’ll ask me. Swaziland! And indeed another of those capital cities that I didn’t visit. I have a habit of missing capital cities. I haven’t been to Brasilia, Ottawa, Kabul, Sucre, Washington DC, Baghdad, Geneva, Cape Town, Mbabane and a few others from the countries I’ve visited. So as I got ready to wave goodbye to Swaziland, I had also neglected to visit its capital city of Mbabane. However, on my journey out of the country, we drove right past it. 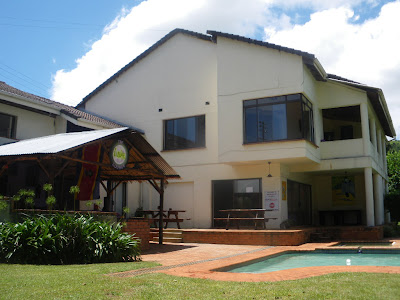 It was an early ish rise at the gorgeous Swaziland Backpackers, situated in Mahlanya by the side of a road in the quiet peaceful valleys of Swaziland. The sun shone down on the swimming pool, the massive mansion come hostel and The Lunar Lounge (my Swaziland local for a hat trick of nights) and we got on the Baz Bus heading for Pretoria, Johannesburg and Nelspruit (with various drop offs and pick ups at those points). 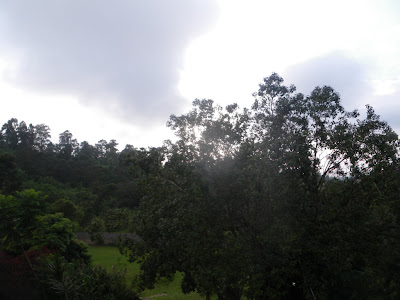 My last view of the Malkerns Valley in Swaziland where I enjoyed a very peaceful few days. Before leaving the area we also picked up some travellers at Sondzela Backpackers Lodge and Lidwala. 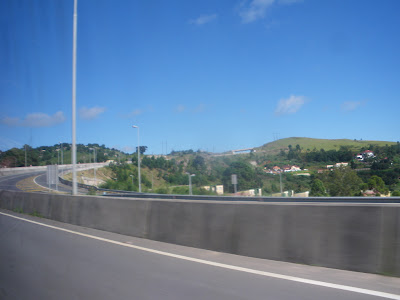 I followed the map in my book and I wasn’t tired. I had got a decent amount of sleep in Swaziland, even managing an afternoon’s kip one of the days, and as we veered round the corner above it was clear that we were giving a by ball to Swaziland’s capital city of Mbabane. To be pronounced “Oooom Bab A Knee”. 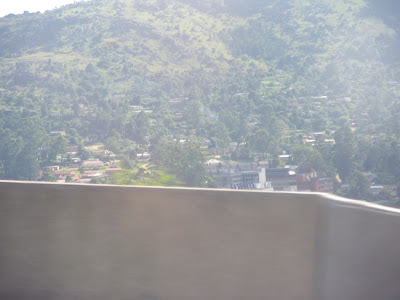 So we never stopped, nor had I expected us to, in the capital city of Swaziland, described by Lonely Planet (forgive me for often quoting them, but I love their guidebooks mostly due to their accuracy and style of writing – they have a way with words) as “pretty nondescript, and there isn’t much to see or do here. There is one Guest House and a Church that you can stay at, in a city which has even a disjointed main street”. I got about 3 – 4 minutes of glancing down at Mbabane from the bus window and it just looked like an over sized village, lying low in the foreground of the Dlangeni Hills. 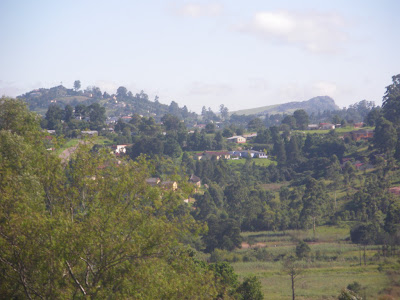 You might wonder then why Mbabane is the capital city. It could easily have gone to Manzini (where we stopped on the first day), Mahlanya (where we stayed and has a lot of attractions) or the area around Ezulwini (which houses the country’s parliament). But the coolness of the location (sheltered by the hills no doubt) of Mbabane is key as it was the British who settled here and set up office. It’s also particularly close to the South Africa border which obviously helps. I was also saddened and shocked to hear that Mbabane is unsafe at night and becoming unsafe during the day, particularly for muggings. Swaziland had seemed very safe and friendly to me up to the point of hearing this. Still, we got a nice view of an apparent thriving capital glowing in the morning sun as we passed by it’s suburbs within minutes. 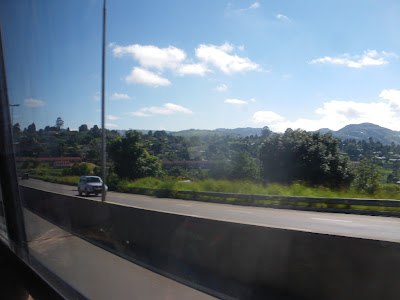 And Mbabane was gone from sight!!! The town of Motjane was another we passed through on this main road before arriving at yet another border exit point. At a place called Ngwenya. 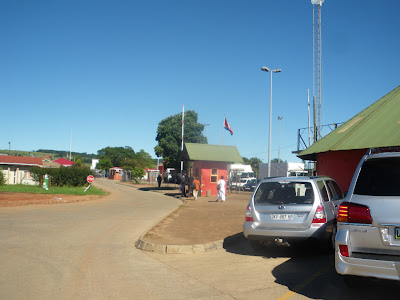 At the Swaziland exit point there were two parts to it. Firstly we got off the bus and filled in the forms and got our passports stamped in the first hut: as exit stamps. 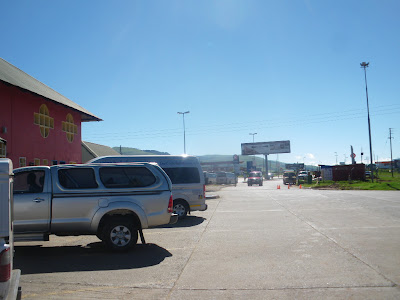 Looking back into Swaziland from Ngwenya. 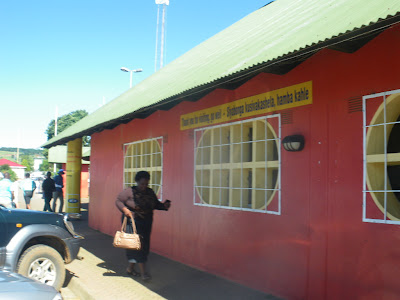 Then at the second hut we had to hand back in the departure card and also get it stamped (I think). It happened rather quickly to be honest and there wasn’t much hassle or much of a queue. 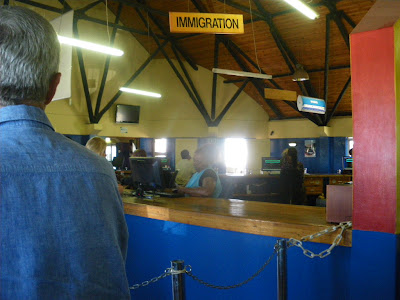 The immigration office for the passport stamps for exiting Swaziland. 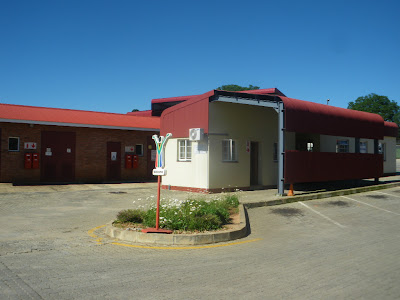 Swaziland exit customs – the second building where we handed the departure cards in. 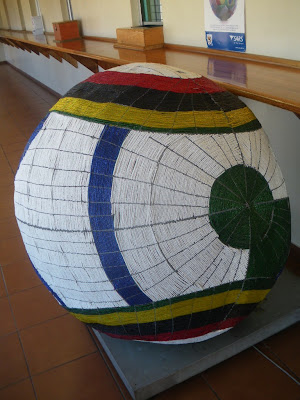 A large beach ball on the exit, handcrafted in Swaziland of course. 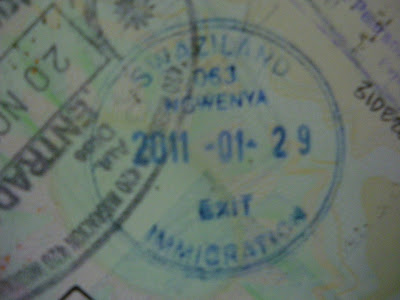 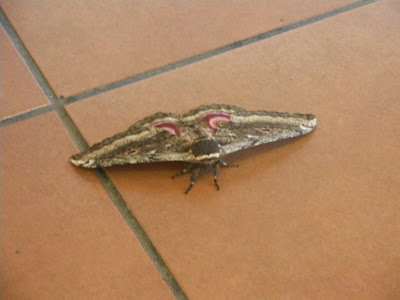 And a pretty butterfly on the floor as I said goodbye to Swaziland. 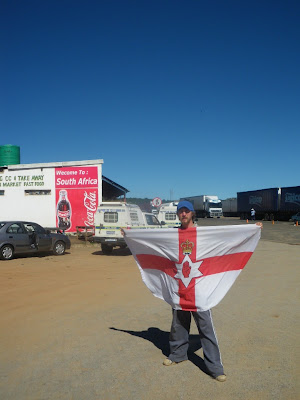 And BOOM! I’m back in South Africa. Brandishing my flag again. This was a border entry point called Oshoek. I hadn’t heard of it beforehand, and until now, hadn’t thought of it since. 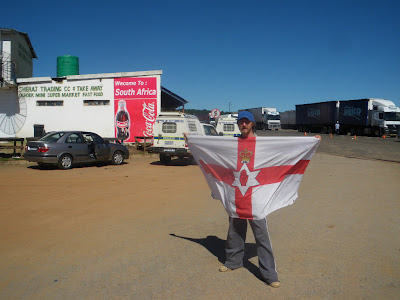 A better photo of my Northern Ireland flag on the way into South Africa again. These muddy,dusty, dirt roads are oh so common on African border crossings (at least at the four that I crossed on this trip). 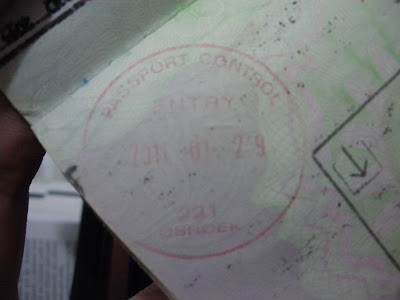 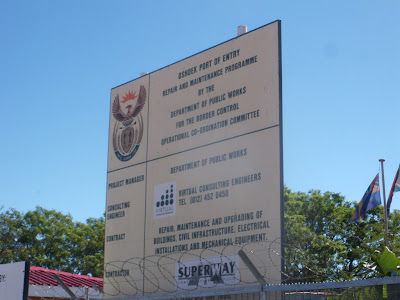 A sign for the Oshoek point of entry. There were no problems whatsoever by the way getting in or out of South Africa, on any of the 6 in or outs I did on this trip. All customs officials and border police did their job effectively and well. It was nice to see especially after some dodgy border crossings I had done before (most notably Colombia to Venezuela and Brazil to Paraguay). 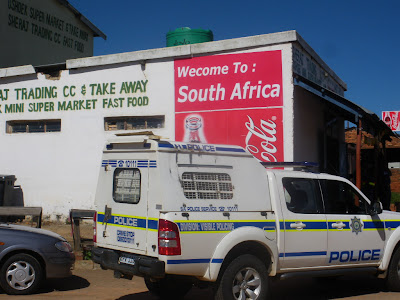 The Police Car and officials did their job well and were pleasant at Oshoek, but one thing that shocked me was the poor spelling on this Coca Cola sign on the way in. It reads “Wecome To: South Africa” and yes we do, but “wecome” should not be one word, so it’s incorrect. Either it should read “Welcome to South Africa” – which to me makes the most sense and is what it should read – this is a welcome to the country after all. Or it could also mean “We come to South Africa”, meaning we are arriving in SA or we are coming to SA. Either way it raised a giggle and worth a photo, but soon back on board and onwards into the sunshine to Nelspruit. 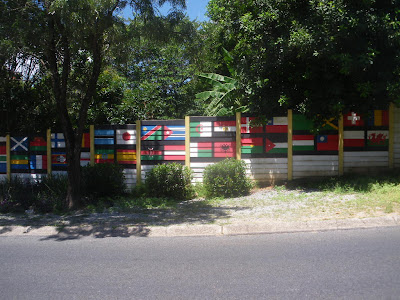 Flags of the world at Nelspruit, as we stopped off at a backpacker’s hostel to let some of our group out. Nelspruit was a venue for the 2010 World Cup and the town itself is famous for being the nearest town to the world famous Kruger National Park. We stopped at two hostels here in Nelspruit, firstly at the above Funky Monkeys, and secondly at the Old Vic. Vaguely reminding me of the UK and Australia all in one, if only by name. 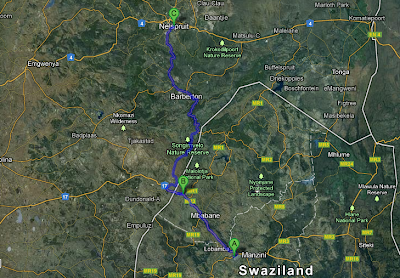 I myself didn’t get out here or have time to see Kruger National Park. We have to give some things up on our travels as time and money permits. Of course I’d love to have done a bush walk, wildlife trail, jeep trail or a safari, but this time it wasn’t to be. My consolation prize would come in the form of a fresh pint of Guinness in an Irish Pub in Nelspruit, as we did stop here for about an hour and a half. So we were now in Nelspruit in the region of Mpumalanga…Cheers Swaziland!
From – Swaziland Backpackers, Mahlanya, SWAZILAND
To – Son Park, Nelspruit, SOUTH AFRICA
Via – Mbabane, Motjane, Ngwenya, Oshoek, Nelspruit
On Route To – Johannesburg
Transport Used – Minibus (The Company Baz Bus)
Nationalities Met – English, Welsh, Israeli, South African, Swedish
Distance Travelled – 188 kilometres
Passport Stamps – 2
Key Song –
OASIS – BE HERE NOW (“fly me down to capital city in the sun”: Mbabane):


DRIVING PAST MBABANE FROM THE BUS:

A NICE VIDEO OF THE SIBHACA DANCE AND LOCAL SWAZILAND MUSIC AT MANTENGA: