Taichung is the third largest city in Taiwan. It wasn’t our plan to actually go there and see it. It does have some appeal, but as my Lonely Planet guide stated, “Taichung is hardly a must-see.” And for that very reason, our first 12 days in Taiwan avoided this massive smoggy city. That is except for passing through it once, and stopping there once. The first instance we were there for 20 minutes waiting for a bus, the night we arrived from the airport. I saw lamposts of Taichung, and from afar, a large junction beaming its way down into a lit up city. It looked massive. Belfast became tiny again. The second time in Taichung was a matter of 2 minutes as our Tailuga – Shinying train pondered there on its way through. Then by chance and almost out of random-ness I decided to make my way alone to Taichung anyway for 4-5 hours to check it out. I had the time to kill. Neil was at work, Natalja was in Taipei with her friends. I had already gotten as far as Changhua (a much nicer, more picturesque city in my eyes), so the short 20 minute train ride from Changhua to Taichung, meant it would be stupid not to at least see Taichung. And apart from all this…the city’s name: Taichung!! Doesn’t that sound fantastic? A milky tea in Taichung

Flocks of people loiter at the busy train station on my exit. Dozens of bored taxi drivers ask me in wick English if I’d like a taxi. I hate taxis! I always prefer to walk and see the sights. The Lonely Planet guide mentioned 2 museums, an art street, a temple and a park. I didn’t have time for all of those, and decided instantly to just walk randomly around. I ruled out the 2 museums to start with – I wanted a free tour of Taichung, and you had to pay entry. Not just that but the museums were a further bus ride away – in heavy heavy traffic in a smoky far east jungle, it was hardly the Friday afternoon activity of choice for this particular Northern Irishman. The only one in town. Presumably. There were no foreigners about as usual. Thats what I loved about Taiwan. People waved and shouted at me on every corner. Taichung was busier and less personal people, but I still had the “Ni Hows” and kids yelling “Why Gorrans” at me. The city centre of Taichung doesn’t really exist as one – because there are two!! 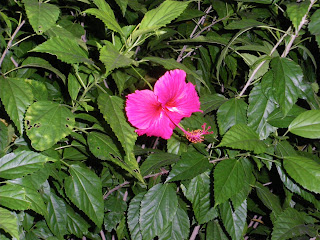 A strange phenomenon this, but Taichung has its city centre by the train station (shops, markets etc.) and its other city centre 2 miles northwest in the “restaurant and bar district.” This was unusual but worth a look. In between the two “city centres” I didn’t notice much difference, shops, offices (infrequent I must add), the odd McDonalds and mini markets lined the main street. Zhongzheng Road was the main street that took me from the train station up to the restaurant area. Taizhonggang Road was the other main road, which was opposite ZhongZheng Road at a busy junction. I found myself there in a haze of Friday evening rush hour. And still no scooters, motorbikes or cars cared where they were headed. A lady hops off her scooter, buys a milky jelly tes right in front of me. Drops 50 dollars on the counter and speeds off before I could even blink. It was that fast. I noticed these things more in Taichung because I was on my own. I didn’t talk to many people. Just the tea vendor who took a photo of me on the way back to the station later on. I found some interesting temples on side streets. A few locals glared at me as I took photos of a temple hidden in behind a housing block full of chained dogs and dead goat barbecues. There were two parks to visit, Botanical Gardens and Taichung Park. I went to Taichung Park for a wee dander, as it was where the ceremony to celebrate the railway line opening was held. I assumed it would be more important. It was nice and peaceful. Lots of statues, a lake and wildlife. The flowers looked pretty in the Friday night smog. Backpacking through Taichung is uncommon. I didn’t even encounter a hotel, hostel or inn. My guide book listed a pub called “The Londoner”, a lively British style sports bar. I looked for it for about 5 minutes and gave up, thinking why come to Taichung and find a London bar. It was slightly more culturally stimulating to walk aimlessly through the local night market. Dried fish made the air smell harbour like. I didn’t buy anything. 4 year olds were busy working away. A kid helped his Dad with the Friday night feast of duck face, rice and vegetables. It felt rude to be nosey, but I won a few smiles back from the people. This night market didn’t have a sign above it in English, but I’m sure it was the “Chunghsiao Night Market”, which the Lonely Planet Guide lists. I spent 30 minutes walking round it. 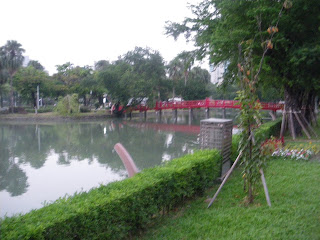 From the edge of Taichung Park I also spied the Baseball Stadium, which Neil had been to on his tour of following the Tainan Uni Lions. I didn’t go there for a photo for once. I was on a slow mission back to the train station by then. I passed through a much smaller night market area, where at the back there was some live singing. I walked to the front and made a video of this female soloist. A few people lurked by on the seats, eating food from one of the nearby food vendors. It was by now dark. I had seen the Friday night rush hour in Taichung (see video) and I was actually heading back to meet Neil for 9 pm (I think) and that would be our night of Shrimp Fishing ahead. 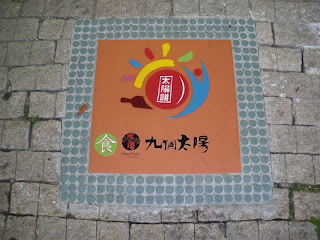 So after another calm, enjoyable walk through random streets (I had no plan!) I bought my cup of tea, checked the train times and headed on my merry way. I would tend to agree with the book that there isn’t a great deal to see in Taichung, but seriously it was worth the trip for a few hours. None of these large Taiwanese cities can be cloned with one another, they all felt different. They all had different appeal. Taichung, Changhua, Tainan, Kaohsiung are all very individual. I was blessed with time and desire in Taiwan which gave me the chance to see so many places there. I enjoyed it. My Friday afternoon and early evening in Taichung came to an end, and soon my sleepy train brought me back to Shinying. 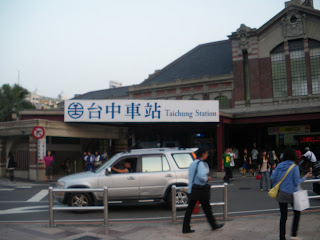 What is it? – Taichung – the third biggest city in Taiwan

What did I do there? – Wandered round aimlessly and bought a cup of tea