While growing up I just loved football. And ANY football really. It was my Dad who got me into it to start with, but if he hadn’t I’d have got into it anyway through the friends I made whilst growing up in Bangor. My first real football memory was watching Algeria versus Northern Ireland with my Dad plus Raymond and Neil Fitzsimmons (my Dad’s mate and his son). We watched it on a small black and white TV if I remember correctly. They were glory days really to see our wee country in the World Cup finals, and as Springsteen would have you know they will pass you by and they bloody well did. I cannot to this day remember my first live football match. I may have even played in it. As a kid I used to play football down the Linear. That was Linear Park in Bangor, Northern Ireland. Some people used to call it Lineker Park after Gary, the striker for Everton, Barcelona and Tottenham. So perhaps my first match was down the linear? Who knows, what I do remember is I used to watch my Dad play football quite a lot. 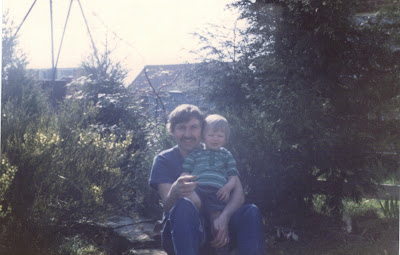 In the 60s and 70s my Dad, Joe Blair, had played for a number of teams (this continued right through the 80s, 90s and in this century). To this day neither him or I have a list sadly of the matches he played, the scores, the goalscorers, or even many photos. The ones I do have I will get posted in due course. He spent time at Crusaders and Distillery (in his younger days) and indeed played at Glentoran’s Oval in a Steel and Sons Cup Final once. My Dad also played against and nutmegged Derek Dougan once in a match at Seaview, Belfast. It was a game for a Crusaders Select v. a Northern Ireland Select. The other teams my Dad has played for include many and various British Telecom teams, Dunmurry Rec, 10th Bangor and most memorably (to me) Bangor Amateurs. He may have enjoyed a few spells at Bangor Amateurs, whose home matches were played just off the Clandeboye Road in Bangor. But on Saturday afternoons as a 9 or 10 year old, I would enjoy travelling with my Dad to various Sports Grounds around Belfast and the Ards Peninsula to watch him play. 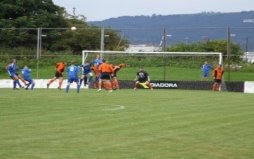 When I look back at my matches watching Bangor Amateurs, I remember my Dad scoring a header in Newtownards once against Abertay and also an incident in Ballywalter where he lobbed the ball from well outside the box and it went in. However the referee and other team protested it wasn’t over the line. It was a Geoff Hurst moment and the ball was DEFINITELY over the line, I saw it with my 10 year old eyes. The goal wasn’t given and outrageously my Dad was sent off for protesting, it was ridiculous. Sadly memory gets the better of me and I don’t recall everything. My Dad also played football in England and Scotland for various British Telecom teams, at one point representing Northern Ireland in a victory over England. Nothing ever changes does it?
It is always worth digging out the archives from an era without today’s technology, where TV was breaking through, radio was essential listening and nobody had even heard of a mobile phone, the internet or a digital camera. Someday I will interview my Dad on his times at each particular club and ponder what might have been for him. My Dad must have played over 1000 times at various levels and the amount of goals he has scored is not possible to find out. My Dad has also managed kids and youth teams, most notably at 10th Bangor Boys Brigade in the 1990s, where I played in a Belfast Semi Final (and lost 8-0) for the team he managed, and a second spell there this century, where incidentally my wee brother Danny played under him. My other brother Marko also played in a team managed by my Dad at one point. Neither Marko or I play anymore!!! But obviously time and other things in life take priority. 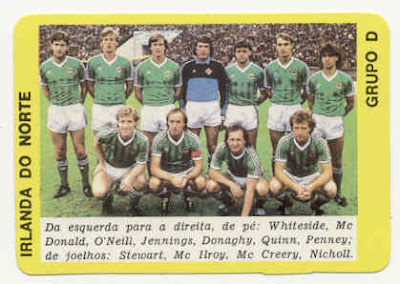 Before the millennium ended, in 1999 I had the pleasure of playing alongside my Dad (for one match only) in a proper match together. We both played for 10th Bangor Old Boys that day against a team from Newtownabbey (I think) in the Old Boys League Division 2. I don’t remember the score or anything really about the match. I was 19 and my Dad would have been 50. My Dad squared the ball to me and I missed a good chance, which was unusual as we both played defence that day. I was right back and he was centre half. Though my Dad was normally up front in his better days, or inside right, or inside left. Such events like the match I played in with my Dad, are confirmed to the history books, and in minor, amateur and non-League football such events are not even newsworthy or important as football is a great game. A great game enjoyed by millions of people each week. My Dad has played in a load of games through the years, and just for now has hung up his boots…but aged 58 you never know when he will put them on again. Perhaps someday I will relive the memories that my Dad provided me with, during a time of escapism in a war-torn Northern Ireland. Football was my life as it forever will have to be. There may even be a long lost Dunmurry Rec video lurking out there… 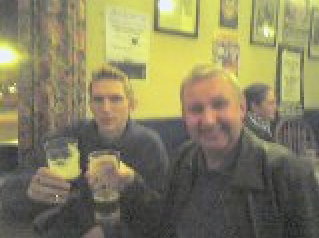 Cheers Dad!
Factfile on Joe Blair:
Born: Belfast, 1949.
Lived: Glentoran Street, Cregagh Estate, Silverstream, Kilmaine, Dundonald, Bangor, Ballyhalbert.
Teams Supported: Glentoran FC, Tottenham Hotspur FC, Northern Ireland. (Likes AFC Bournemouth too).
Teams Played For: Crusaders, Distillery, Bangor Amateurs, Dunmurry Rec., Post Office, British Telecom, Bangor Amateurs Old Boys, Various Summer League Teams and in 5 a side tournaments. I cannot name them all and there are more I have left out.
My best football memory from my Dad: Him buying me a Mexico 86 Northern Ireland scarf, which I still have and is my most treasured possession.
First Match I remember watching on TV with my Dad: Northern Ireland 1-1 Algeria (Mexico World Cup, June 1986).
First Match I remember watching my Dad play in (I had to rack my brains, and the first I remember was this one, though I know I had seen him play before then): Bangor Amateurs v. Abertay (Ards Playing Fields, January 1991). In terms of the score, your guess is as bad as mine, my Dad scored a header for Bangor Amateurs on the day, though I have no idea whether they won or lost, or indeed, drew. I have a feeling it was a 5-2 defeat for my Dad’s team.
First Match I remember going to with my Dad: Northern Ireland 0-2 Yugoslavia (Windsor Park, Belfast, September 1990).
Games my Dad played: Probably over 1,000.
Goals my Dad scored: Definitely over 150.
Amount of times I played on the same pitch with my Dad in a proper match: 1.
My Dad’s glory day:
Join 15,017 Monthly Readers! If you enjoyed this article and LOVE travel and SAVING money, get e-mail updates from Don’t Stop Living – a lifestyle of travel! (It’s Free) 😉 Jonny