Politics aside…being from Northern Ireland has often led to confusion over the years. I find most people still use the word Ireland to describe as my country, Ireland isn’t in fact a country, but is an island consisting of two countries, Northern Ireland (of six counties, and of British occupation but whose residents are free to choose British or Irish identity, or indeed BOTH) and Republic of Ireland (granted officially as Eire, which translates as “Ireland”, not be be confused with the island of the same name, including the extra six counties which are not included in this Eire state). It can cause quite an identity crisis actually. I am proud to be Northern Irish, British and Irish at all times and can clearly and equally claim all three, such is my birthright. First and foremost however I am Northern Irish. Here’s us…

The problem is I don’t particularly associate myself (and have had arguments with over the years) with those from the Republic of Ireland. Therefore being called Irish dilutes this part of my real identity somewhat, even though it shouldn’t (and normally a quick explanation solves this). I also don’t particularly associate myself with being British either – those from England, Wales or Scotland (each British country has clear and separate cultures). Therefore to be associated as British in some instances can also cause me to get upset. Though I shouldn’t argue, for, actually I am British, Irish and foremost Northern Irish. Or should I? Yes, I’m all three but I only ever want to be NORTHERN IRISH. 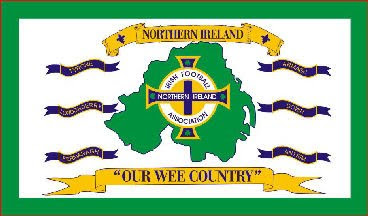 I often post and read the excellent Northern Ireland forum “Our Wee Country” (Marty Lowry’s dream, which formed because of the fanzine) and there is quite a “thread” on there about overseas ignorance to Northern Ireland. Having thought a lot about this subject, it could come down to something as simple as the name of my country, NORTHERN IRELAND. Even this flag (fleg) causes problems despite it’s very existence was expected to amalgamate all cultures (British symbol the crown is counter-included with the Irish symbol of the red hand) 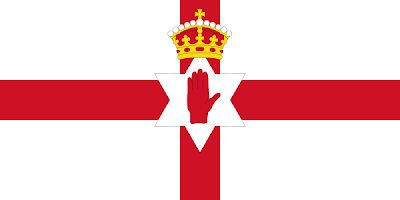 As an old flat mate once said, “Jonny you need to change the name of your country. People just think ‘Northern Ireland’ is a geographic part of a country called ‘Ireland’ “, the more I thought about this in life, I have to believe he got it spot on.

Here are the 9 counties of ULSTER…Antrim, Armagh, Down, Londonderry, Cavan, Monaghan, Fermanagh, Donegal, Tyrone, the six north eastern ones make up Northern Ireland:

Only SIX of the Ulster counties ended up in the country of “Northern Ireland” (ironic, hey that Donegal, the further most north county didn’t make it in…)


“Got TWO points to make on this matter, which I have found out in life: 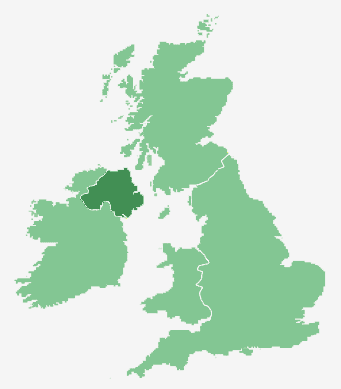 It took an English flat mate of mine a good few years ago to explain to me why he thought that most English people (which it is, in my experience) dont really know there’s a border in Ireland and often show a total lack of intelligence and ignorance to the Northern Irish and the fact there are two separate countries on our island…(he was a well travelled, cultured and intelligent guy, this particular flat mate).

He basically said something along the lines of “The problem is Jonny, you need to change the name of your country. When people hear you say ‘Northern Ireland’, they often just assume its a region or you’re referring to a geographical part of a country called Ireland. For example if Wales was called Western England*, or if Scotland was called Northern England, it would cause exactly the same type of problems.”

He suggested that back in 1921 when Northern Ireland as a country was formed, it shouldn’t have been called Northern Ireland. It’s not really an ideal name is it? Well for a start, Northern Ireland doesn’t include the most NORTHERN county (Donegal) in Ireland, and isn’t in fact a name which will ever stand out as a separate country, not helped by the fact that the rest of Ireland isn’t called “Southern Ireland” (which in the case of the former East and West Germany gave it a more obvious two identities, given that they are both named from opposite compass directions). If they were going to call the six county state Northern Ireland, the eventual name of Southern Ireland/The Irish Free State should simply have remained as that…Southern Ireland.

Of course the obvious name back in 1921 would have been “Ulster”, but the big problem with that as we all know is that Cavan, Donegal and Monaghan were left out of our country when the island was “partitioned.” Personally I think this was the real problem. In an ideal world, they should have incorporated us all into a 9 county country and called it Ulster (which along with Scotland, Wales and England would make up an obvious four country United Kingdom). The rest of the island could have been called whatever it liked in that instance, as there would be a clear difference in names for a start.

For example I live in Australia at present, and here we have Western Australia ** and South Australia (two states within this country called Australia). To an outsider (whether through ignorance or whatever), saying “Northern Ireland” will often just mean to them you are giving them a geographic explanation of what part of Ireland you are from.

I cant help to think my old flat mate got it spot on, and we should in fact have been from a country called Ulster.

* Try calling a Welsh person a Western Englander and then they can realise why we may have a slight identity issue and the need for our own country name “Northern Ireland” to always be preferred to “Ireland”. Im from both places, but one of them isn’t a country – it’s an island.
** A person from Western Australia will often say they are from Western Australia, which to most just means the geographic region of Australia. There is no conflict between Western Australia and the rest of the country, nor is there any offence (or correction) taken to calling a Western Australian person an Australian. However in our example, calling a Northern Irish person (say for example someone from the Shankill) an Irish person can easily offend, given our history of conflict and the divide in this little island of ours). With this in mind, perhaps people’s ignorance to us is slightly more understandable.

POINT TWO:
If anyone ever asks me where I’m from I will normally answer “Northern Ireland”, after that say “Bangor”, or “near Belfast the capital”, sometimes I will say “The UK”, rarely will I say “Ireland”.

IF I say “Ireland…”
Irish people (mainly from the south) and people from other countries will often ask: “Oh cool, what county are you from?”
My answer then is always “Northern Ireland”, as I hate all this county shayte. OK, Im from County Down, but I never tell people Im from County Down. Is it a Republic of Ireland thing to be “proud” of your individual county.

In essence I can answer all of these to the question “where are you from mate?”
– Northern Ireland (my country)
– Bangor (my town)
– near Belfast (my capital)
– County Down (my county)
– United Kingdom (my government/monarchy)
– Ulster (my province)
– Ireland (my island)
– Europe (my continent)
– Planet Earth (my planet – only used whilst talking to Martians, Mercurians or Jupiterians)
– my ma’s womb

Thoughts on points one and two?”
[end of my post] 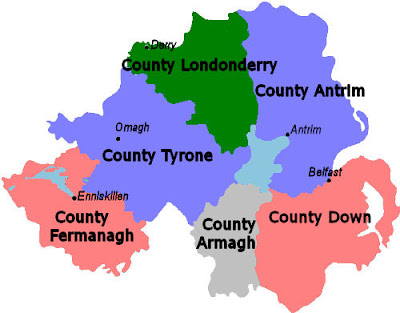 Bear in mind that absolutely none of this country naming argument is based on the sectarian divide, it’s actually quite a refreshing prospect. Intelligent persons on a Manic Street Preachers fans forum called “Forever Delayed” have also brung up a debate about a “United Ireland”, which I do have to laugh at, as in any event of that occuring it would be more safe to refer to that state as “Dis-united Ireland”, the below emblem represents the Irish province of Ulster (of 9 counties), of which Northern Ireland forms the main part:


Love for my country and land? Of course, whether you’re a Protestant, Catholic, Jew or Hindu, its our country.


Why post about this? Its a bug bear of mine whatever that means and plus its Australian Election Day here in Parramatta. I’m not eligible to vote. Will see if it means any change for Western Australia or indeed South Australia…

13 thoughts on “BEING NORTHERN IRISH: an identity crisis??”