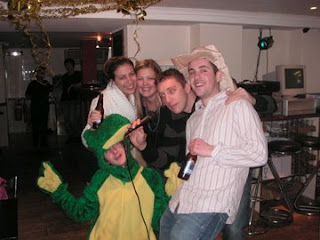 Back in late 2006 I was coming to the end of my first six months working in London for Bite Communications. The first 3 months were a bit of a struggle, both financially, and in terms of getting to grasps with the busy workload. However October – December 2006 were much more enjoyable and by the end of December 2006 I was having a lot of fun working at Bite, which is one of the best places I’ve ever worked and a very cool PR Agency. One of the guys at work was a barrel of laughs, an English guy from Colchester, Ben White and he suggested we had a staff “fancy dress day” at the end of term/Christmas last day of work. It was to be Friday 23rd December 2006 and we were doing fancy dress at work. Always one to dress up and take advantage of these things, I had a wizz round the house to see what fancy dress stuff I still had, and then I remembered that in Weymouth I had found a frog suit for £15 in a sale only a few weeks earlier, so it had to be that. I hadn’t worn it in public yet… 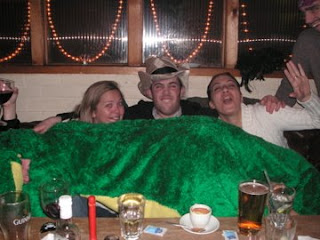 I left my house in Wyatt Road Dartford that morning, fully dressed in the ridiculous frog suit. I boarded the 7.07 am train from Slade Green to London Charing Cross. I was early for a change and decided to get out at Charing Cross and have some breakfast at Benjy’s in Viliers Street. A sad story that, as Benjy’s went bankrupt soon after, and I often stopped there for their breakfast deal which was £1.99 for a bacon bap and cup of tea. That morning, dressed as a frog, I got the deal i n Benjy’s and raised a few eyebrows. Apparently its very abnormal to be in public dressed as a massive green frog. Off I went to Embankment station, where I caught my regular district line tube to Ravenscourt Park, making it into work before 9 am. I always liked to be on time, and this normally meant leaving my house 2 hours before work began. There I was at my desk ready to do a morning media coverage scan for my client Apple, dressed as a frog. 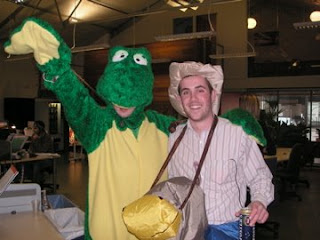 Soon more Biters started appearing in fancy dress. Robin was in a traditional style Middlesbrough football shirt, then the more colourful characters emerged. The attractive Emma Ward was a cheerleader, Paul Thompson had kept things topical and had been attacked by a stingray fish, pretending to be Steve Irwin, the Australian presenter who was sadly killed by a stingray. Eleanor and Nadia had become Wilma and Betty from the Flintstones, they had bought the outfits especially and looked the part. Some people wanted to know who was in the frog suit, so at various points in the morning I took my frog head off. It was a real party atmosphere at work and we got a half day that day anyway. I got most of my work done by midday, and at points there was a lot of comedy in the office. Ben White, the fancy dress “organiser” was dressed as a man on a horse or maybe a cowboy! Chris Johnson, the IT guy had set up karaoke upstairs for us, which saw me do the worst cockney accent ever to Blur’s Parklife. I didn’t know it then, but the incident was filmed by someone, and 6 months later, in the last hour of my time at Bite Communications, my manager Jonathan Hopkins randomly played a video of this to the whole company, which was nice, even if the singing was shite… 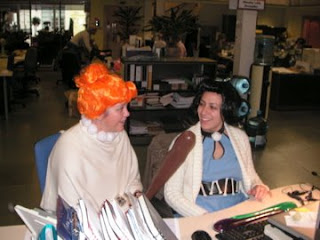 It was a barrell of laughs that day, I even managed to do some scans for Apple and Sonos, on time, a Christmas update and relax in the office. Only now that I write about it, do I realise how good it actually was working at Bite and how much fun the Fancy Dress Day was. I even got some special Christmas gifts from working in PR that year – a few free beers in work as always, a bottle of champagne from a media video clipping agency (Intelligent Media), some chocolates, and other random things. It was truly a great day in work. I danced round the office dressed as a frog at one point. Finally I had made it as a PR person. PR is all about image. And if that means enjoying myself as I work tirelessly and creatively on clients, then so be it. I’m trying to remember who else was dressed up as what that day, and I think Jamie Kilduff was a pirate, and Foo Dowling was some kind of Halloween character. 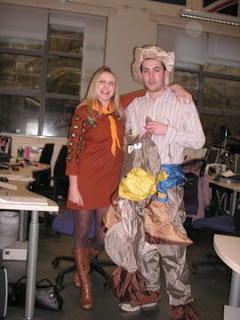 The day in the office did actually finish at about 1 pm, all jobs were done, and some of us said our goodbyes for the Christmas break of a few days. However a lot of us were up for the pub, and me included so we headed to one of our locals, The Raven, by Stamford Brook tube station, and just under a bridge. I frequented that pub a lot during my year at Bite, and this one started early. My mate Neil was in London that night and strangely Millwall were also at home that night, a 7.45 pm kick off and he came and met me in the pub with his brother Owen. I could have gone to the Millwall match that night, but instead I had a few pre – Christmas pints with Neil and Owen and they headed off to Bermondsey for the match, while I stayed in the bar with Steve, Eleanor, Nadia, Paul, Jamie, Ben and James. It was a cold night, and I hadn’t actually brought a change of clothes, even had my green Northern Ireland shirt on underneath the frog suit, so I guessed I wasn’t changing clothes, I was going home as I came in – as a frog. 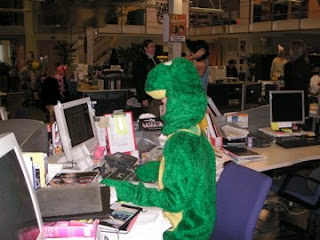 After a few more beers in the Raven, it was decided we should go to the Chinese bar for some food and karaoke. It was my first time in this bar, which is on the corner of the main street through Chiswick and Hammersmith, and very close to the Bite offices themselves, at Beavor Lane on the other side of the road. Its actually a Chinese restaurant, whose name I cant remember, but they have a nice bar downstairs where they serve food and beer (on tap) and have karaoke. I went there a few times while at Bite. On this particular night I was the only one still in fancy dress, and we each sang quite a few songs. I recall the excellent Enrique Iglesias song “Escape” being sung in there that night, and during the day in work, Dan Bleakman had the song pumping from his stereo loudly. Fingers, whose real name is James Walker got up and sang to his girlfriend Nadia “You’ve lost that loving feeling” by the Righteous Brothers. He did a pretty good version of it too. Soon though I realised time was getting on, and that Christmas I was due to fly back to Belfast on Christmas Eve (the following day) to stay with family for a few days. 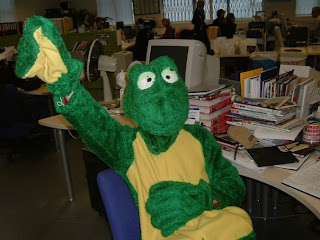 I left the Chinese bar and said my goodbyes, to Ben White well that was the last time I saw him, as he moved to the USA the next week to work for Bite USA. The others I’d see after the Christmas break. I boarded my district line train to Embankment dressed as a frog. When it stopped, I realised I had 20 minutes or so before the last Charing Cross train to Slade Green, and so I headed for that final pint in central London as a frog. I got talking to a few people in happy Christmas mode in The Princess of Wales pub at Charing Cross, before I finally boarded my train back to Kent. I got some very strange looks for a totally unhumourous English train full of commuters. You’d have thought they’d be happy. IT WAS THE DAY BEFORE CHRISTMAS (by now, after midnight) and I was having a laugh dressed as a frog. As Michael Palin, once rightly said about England, “there’s not a country in the world less happy to see you and smile.” I enjoyed it, even if most of England doesn’t find it that funny…

What was it? – Last day of Bite Communications before Christmas 2006.

What was I doing? – As the photos show, I dressed up as a frog for work.

Bars visited – BIte Bar (in other words the office fridge), The Raven, The Chinese Bar, Princess of Wales.