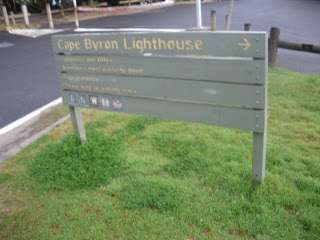 It’s known for being the most easterly point of the Australian mainland, and that’s one of the things that attracted me to Visit Cape Byron. That alongside the fact I was already in Byron Bay, and that a more elevated view of the Pacific Ocean could be had at this glamorous little tip edge…the lonely summit of Cape Byron. 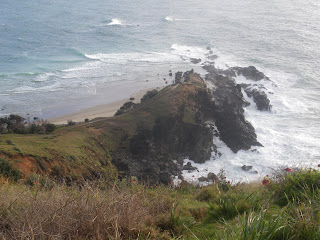 There’s no doubt it’s dangerous. Rocks, cliffs, sharks and stingrays all have the power to kill humans. All lurk in the general area. All would never put you off wanted to enjoy a gorgeous sunrise, catch some early morning waves or get your photo took at the most easterly point of the Australian Mainland. Something to tick off the list I guess. But more like something amazing to kick start my final two days of the road trip from Tasmania to Brisbane. 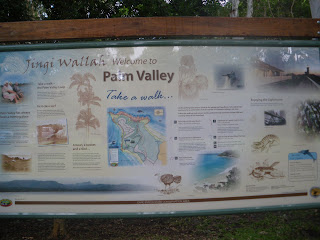 I parked at Palm Valley, up on one of the hills overlooking the beaches at Byron. 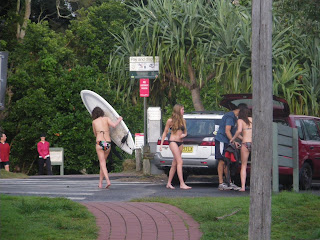 As I parked the car, three young ladies hopped out of an adjacent car directly opposite and all pre-dressed in bikinis. I had never seen that happen before. They were ready for the surf. Surf board in hand they sped off down to the cove to surf the waves. 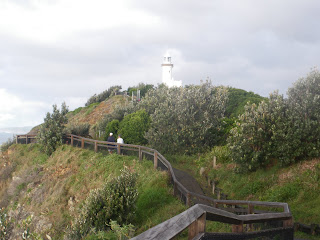 Meanwhile I strolled up Palm Valley enjoying the tranquility and nature. I passed palm trees, morning joggers and lookout points in equal quantities until it valleyed down a wee bit to reveal yet another surfers beach. 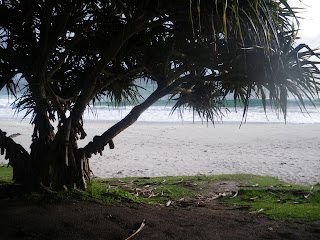 This was Wategos beach. 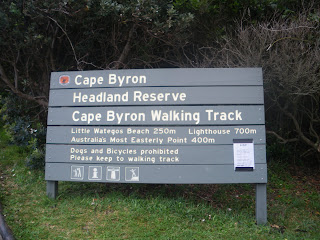 Beyond that a signpost for Cape Byron and the upward trek to Australian Mainland’s most easterly point. It would be pretty silly to get this far and not climb to the top to admire the view. 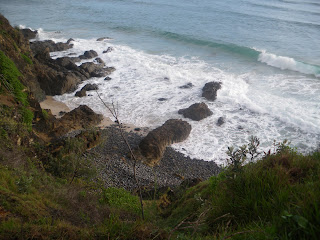 Joggers past me and jogged to the top. I stopped every now and then to take in the scenery, take some photos and breathe in that fresh unblemished Pacific Ocean Sea Air. 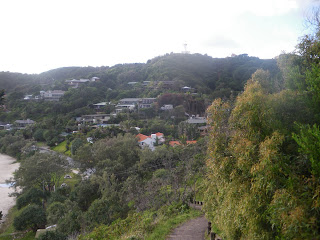 It was the freshest morning in the Australian life of me to date. 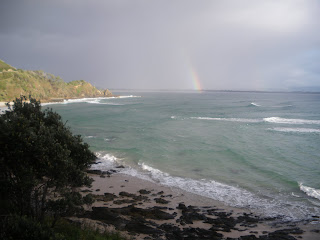 A shy rainbow bowed nervously out of a sky so grey you would be fooled into thinking it was wet and dull. Quite the opposite. A light shower on the other sight of Byron Bay had passed. 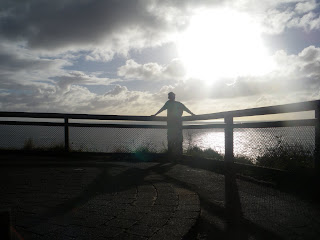 All that was left was the glorious sunshine, to be viewed from the tip of Australia. 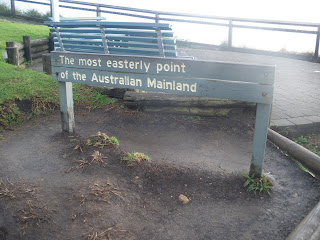 I reached the top quickly and it came as a shock. It was high up, and this view I got was the furthest east I could go on the entire island of Australia (forgetting the small islands off to the east coast of course). 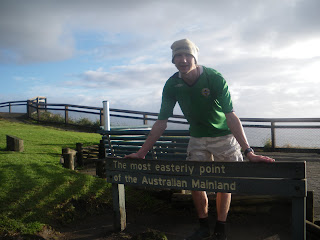 I paused for that one second realising that NOBODY on the entire island of Australia was further east than me. I was the Eastern most person on the island for a few minutes. 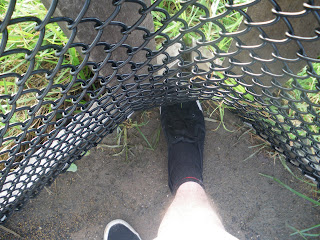 I put my foot to the tip of where you could officially go, so my foot was the furthest most east foot in all of mainland Australia at that point. 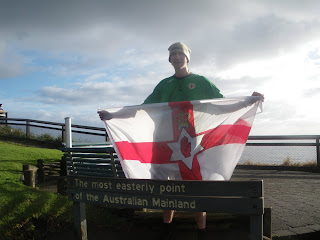 A few female joggers came up to me and stopped for breath at the eastern tip. They were all Australian. One of them took a few photos of me. 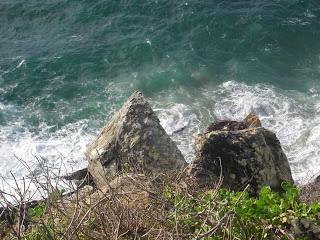 They told me how you can see whales sometimes looking out at sea. We had a look and there weren’t any. You have to be lucky just I guess. 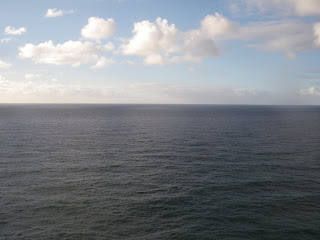 After my obligatory photo and video by the Eastern Tip of Mainland Australia, I quickly walked up to the top of the steps. 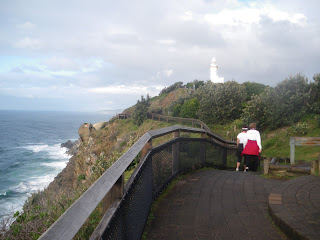 Which was exactly why you should be here – to see Cape Byron Lighthouse, sitting at the top of the cliff. Crackin view from up there. 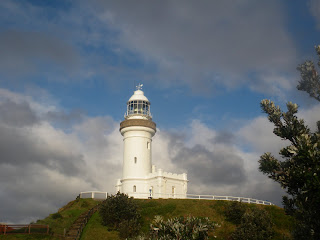 It was built in 1901 and its white. I didn’t get much more information, or need any more than that. 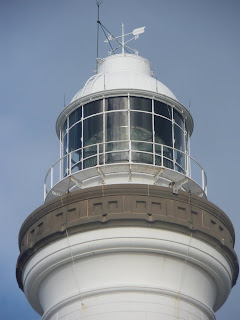 The Lighthouse was closed and there was nothing else around to be done. I had been and seen Cape Byron and stood on the most easterly tip. 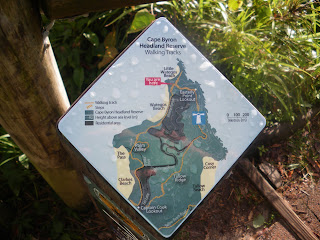 I simply walked back to my car and continued on my next leg of the road trip up the east coast. I was bound for Coolangatta, where George Sutton, a friend from my days working at Best Break lives. I had enjoyed all I could from Cape Byron and the legendary Byron Bay. 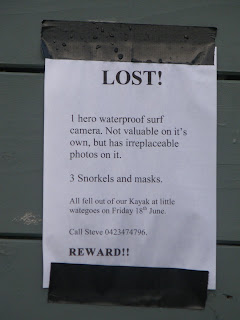 I should mention that on my way back was a note on one of the beach board notices to say that someone had lost their camera at Wategos or Little Wategos beach. In the unlikely event that you read this, I’ve put a photo to the left there with the phone number on it. So if you found find came across a water proof camera in or around the end of June 2010 get in touch with the phone number on there. 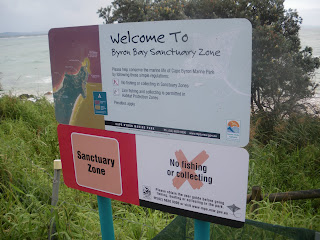 So Cape Byron, Byron Bay…It’s a place you won’t forget if you go there. Byron Bay is one of those ultimate paradises with personality built in.
Other Easts –
– East Belfast (home of Glentoran FC)
– Clint Eastwood (Fake Cowboy)
– East Timor (One of the world’s newest countries)
– East Germany (the DDR – which became united and formed Germany after the Berlin Wall came down)
– East 17 (UK pop band, most popular in the early to mid 1990s)
– Eastenders (UK Tv Show soap opera)
– The Witches of Eastwick (A Filim)
KEY SONG:
East 17 – Alright… (in keeping with the “EAST” theme…)
CAPE BYRON – THE MOST EASTERLY POINT OF MAINLAND AUSTRALIA:
Join 15,017 Monthly Readers! If you enjoyed this article and LOVE travel and SAVING money, get e-mail updates from Don’t Stop Living – a lifestyle of travel! (It’s Free) 😉 Jonny