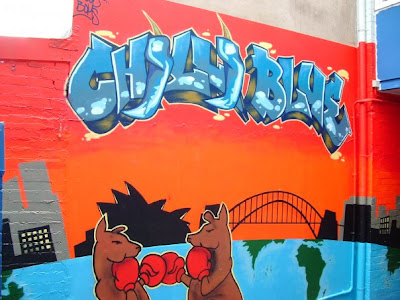 It was all a bit unorganised getting to and arriving in Sydney. Just a few days before the flight from Kuala Lumpur to Sydney, I had to book a hostel, as I wanted to be sure where we would stay the first few nights. As it turned out, the pressure and randomness of booking the hostel worked in our favour. I had to log in to the internet in our hostel in Singapore, quickly look up some hostels, and I just picked one that sounded good and wasn’t too dear. The name “Chilli Blue” just appealed to me. I had no idea if it was a good or bad hostel, whether it was really that good value and I didn’t know what area of Sydney it was in. In the end I got it spotty dog. It took me just a few minutes to book, and I opted for 4 nights in an 8 bed dorm for two of us, me and Natalja. Eventually we stayed a lot longer than that and made a lot of new friends in what is the coolest backpackers hostel in Sydney. So the hostel was booked, I knew a few people in Australia and we could take life from there. Starting with a bus from the airport to Chilli Blue hostel. 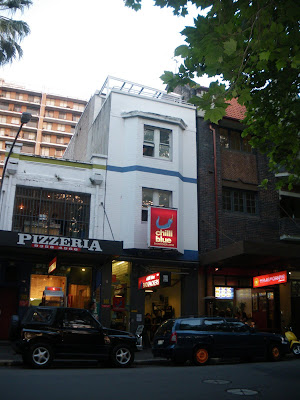 I have to admit I was a wee bit jet lagged. We had done so much in Singapore and Malaysia forfeiting sleep that by the time our flight landed in Sydney, we were surely ready for bed. A shuttle bus took us from Sydney International Airport directly to the Chilli Blue hostel, which is situated in the King’s Cross area of Sydney. I had no idea if this area was popular, close to the centre or any good for rail links. As it turned out it was all three, and better. Situated shyly half way down Victoria Street, and sandwiched between an open road cafe and an over-priced pizzeria, near the junction of Darlinghurst Road, a blue chilli pepper sign is our first glimpse of Chilli Blue. It’s no ordinary hostel, I can tell you that! 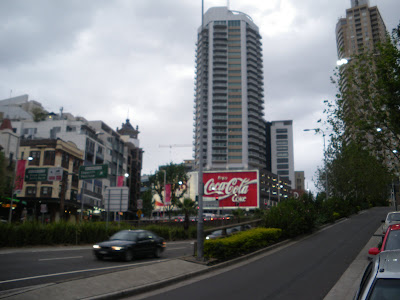 For a start the area, King’s Cross, is the lively heart of Sydney’s party nights. Seven nights a week. There are at least 30 bars, restaurants and clubs all very close by. It is a 5 minute walk to St. Mary’s Cathedral. it is a mere twenty five minute leisurely dander till the Opera House and that there Harbour Bridge. The location of the hostel is perfect for a new backpacker to Australia. The street its on also has about 10 other hostel, including the Boomerang and Original Backpackers. But believe me, stick your neck into Chilli Blue. Here’s why…. 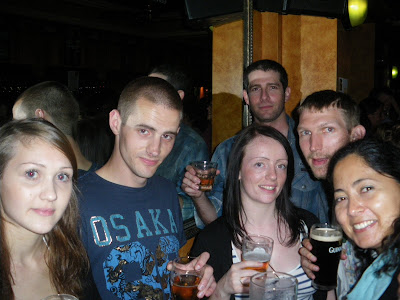 The hostel itself has an automatic party and social atmosphere. You do not even have to try to chat to people or make new friends there. It happens automatically. Thinking about it made me remember the awful “Hostelling International” on Amsterdam Avenue in New York, which tries to defeat making new friends. No alcohol is allowed, no food in the TV room, and the people staying there (except for the few in the same mould as me) are all very inward and dont want to meet new people. Well, Chilli Blue was quite the opposite. On arrival Natalja and I were meant to be in a 8 bed dorm, yet all the places had gone and all that was left for us was to take the double bed in room 12. This was a room for just 3 people. More cosy, cheaper rent, a shared TV and fridge. In there we met Martha, a lovely Colombian lady. 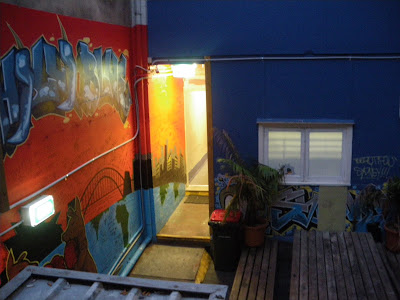 I was already jet lagged though and we both went to sleep, though Martha had invited us both out that night. Already I had a new friend in Australia, and I hadn’t even touched “Goon” or entered the Chilli Blue Common Room yet. A few hours nap was required, in the heat of Australia’s Sydney and soon I was up showered and ready for the Chilli Blue and Australia adventure to begin. I had never been to Australia until I was 29. This was my first day in the country and here we were in Chilli Blue. 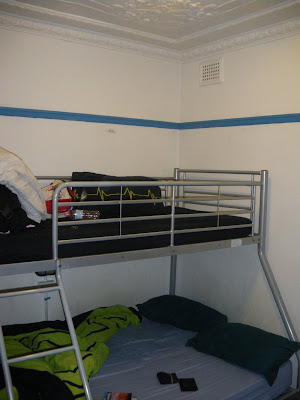 The “common room” has lazy soft stools, all bunched together to mingle on. An old wooden floor and bright painted walls give it a personality. The people staying there make it crazy. On the first night before going out, Natalja had already been introduced to “Goon”, Chilli Blue’s most consumed alcoholic drink. It is known as “Goon” as its “Goon Wine.” The wine costs just 10 Dollars for a box of 5 litres! The reason its called “Goon” is the wine is in a silver “bag” (similar to wine boxes we have in Norn Iron, and rest of UK: except these are bigger), which looks like a pillow. And probably acts as a pillow for many Goon consumers. Goon is the aboriginal word for pillow, hence the name “Goon”. Outside there is another “lounging area” with benches and in the heat and humidity of an Australian spring, this became another place to meet, mingle, drink Goon, or beer and play darts or goon pong. 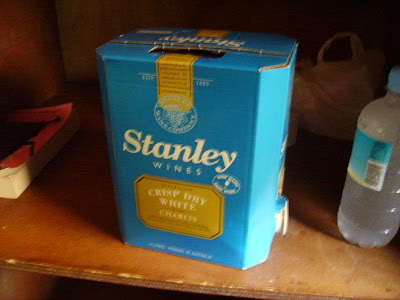 Having given up alcohol completely for 6 months of the year, it was hardly the introduction I wanted to the land down under. On that particular first night however, I resisted Goon and headed out sightseeing instead round Botanic Gardens, Sydney Opera House and Harbour. This was with a wee group I’d met in Chilli Blue, featuring two Colombians (Mad Fish Willie and Martha), one Swede (the pretty Daniella) and a hat-trick of Derbyshire English people (Daniel Evans, Charlotte Walsh, Hayley Meads). That random meeting in Chilli Blue started my life on a totally new route as luck and fate would have it. But from that night on, I knew the Chilli Blue experience would be an interesting entrance to Australia. 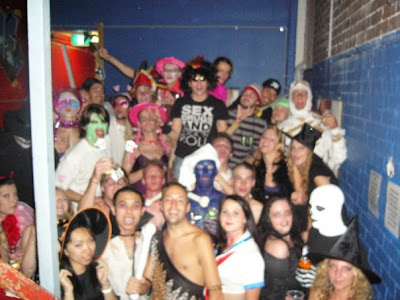 Every night the hostel offered free drinks and entry into local nightclubs. This ranged from The Gaff (at Oxford Street) to local bars in King’s Cross (O’Malley’s, The Sugar Mill, World Bar). Everyone from the hostel (up to 100 people) would go out together, drink together, party together and spread the Chilli Blue brand throughout the streets at King’s Cross. Basically Mike Gent, the rep from the hostel would get us all together around 9 pm and walk us round to bouncers/managers at a local bar or club. They would then get us all free entry and provide free drinks vouchers, jugs of beer, sangria and shots. It was all free! So in the first week in Australia, we did a fair bit of partying, socialising and blending in to new surroundings in Australia. 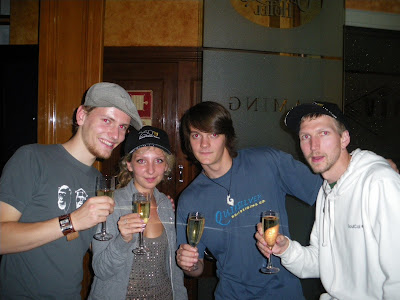 It was at Chilli Blue where I first met Daniel Evans from Derby (actually on the very first night – the trip to Botanic Gardens, Opera House and Harbour). Daniel is now my flat mate and new travelling buddy. We met people from many different nationalities whilst staying in Chilli Blue and had some amazing nights out. On one night out, Natalja got to the semi finals of a Darts Competition in O’Malley’s and she won 2 Guinness hats, a pint of Guinness and a bottle of Champagne! We shared all that and then headed for more free drinks at the Sugar Mill bar nearby. The Sugar Mill was a regular haunt for us during our time there, but O’Malley’s (an Irish Pub) became our local. With 6 Dollar Jugs of Toohey’s New available, we popped in there regularly. 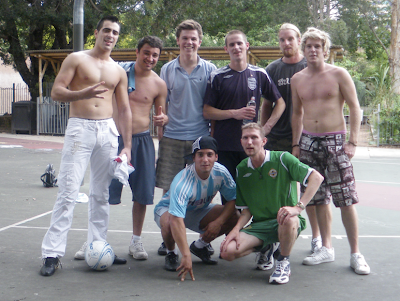 During the day the hostel offered a chill out appeal and relaxation. In the morning there was the free breakfast (tea, coffee, milk, plus toast+jam/butter and cornflakes), always a bonus for a traveler. Some day they even organised sport, football and basketball. I played only my second football match in 3 years here in Australia. Wearing my Norn Iron shirt I was pleased to still possess some skill and speed, even in the Australian heat. We played with Brazilians, French, English, Germans and another few nationalities. The photo to the left was taken early on, the later matches featured teams of 6 or 8 aside. It was great to have a kickabout and score a few goals in the land down under. 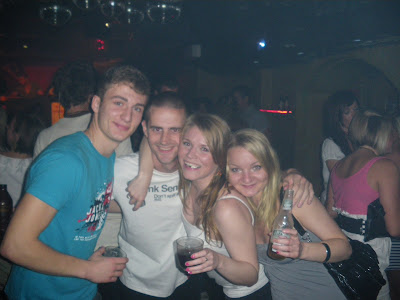 We made some good friends in Chilli Blue, including German Simon Holthaus and two Finnish ladies (Karoliina and Sofia). We found that there were more Germans than any other nationality. Two English guys were also the party animals: Toby and Charlie (we’ll go into that more on the Halloween Night post coming up soon!). There was also a very pretty Canadian lady, Ashley who we met there. WE hope to keep touch with most of the cool people from Chilli Blue. If you’re staying in Sydney – do it – stay at Chilli Blue! 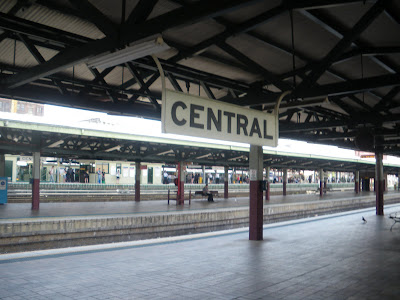 Regardless of the fun we had had at Chilli Blue, the nights on the town, the football, the party atmosphere and the awful free breakfasts, after 11 nights it had to come to an end. So we parted ways. Our Chilli Blue experience was over, and with it a new chapter would start. For me it was the dream job of working in PJ Gallagher’s Irish Pub in Parramatta, finding a flat in Parramatta, but before that spend a full week experiencing the gorgeous Blue Mountains. For Daniel, it meant leaving the Derby girls behind, and coming travelling with me. And for the lovelost Natalja, it meant a return to England (not Estonia) in search of pastures new. We parted ways one Tuesday morning in early November and that was that. We left King’s Cross station, changed once only at Central and headed on the Blue Mountains line train up west to Katoomba. We had enjoyed and endured the Chilli Blue experience and it was time to move onto pastures new…
Hostel – Chilli Blue Backpackers, 144 Victoria Street, King’s Cross, Sydney, 2000.
Cost per night – 23 Dollars for a bed in mixed dorm (this actually goes up to around 60 Dollars a night at peak times, i.e. Christmas)
What you get – Free internet, free breakfast, free drinks every night, free entry into clubs, fancy dress nights, darts competitions, pub quizzes, football, basketball, new friends, a world of opportunities
Negatives – The showers were shit. The hostel itself is a bit dirty. The internet bans You Tube. People steal things from room mates. You gladly forfeit all these negatives for the positivity within Chilli Blue!
Local Pub – O’Malley’s
Nationalities Met – English, Colombian, Indonesian, Chinese, German, French, Republic of Irish, Canadian, Estonian, Finnish, Swedish, Brazilian, Australian, Spanish.
Bars Visited – O’Malley’s, World Bar, The Gaff, The Fortune of War, The Sports Bar, Bourbon, The Elk, Candy Club.
Alcohol Tried – Various types of Goon wine, VB (Victoria Bitter), Toohey’s New, Boag’s Lager, Gold Beer.
JET LAG ARRIVAL AT CHILLI BLUE:
LIVE ACOUSTIC MUSIC AT SUGAR MILL (OASIS COVER VERSION):
HALLOWEEN NIGHT IN O’MALLEYS:
LOUNGING AT CHILLI BLUE:
Join 15,017 Monthly Readers! If you enjoyed this article and LOVE travel and SAVING money, get e-mail updates from Don’t Stop Living – a lifestyle of travel! (It’s Free) 😉 Jonny