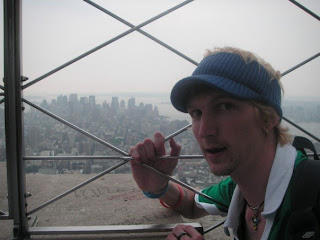 Empire State Building: A moon is in my head

It was pretty inevitable really. At some point or other in my life I was going to go to the top of it. And it finally does deserve a blog entry of its own on top of the mention in my New York condensed blog post. What it is is the Empire State Building! It is quite incredible, a masterpiece with a fascinating history. It was the tallest building in the world when it opened to the public in May 1931. It took just over a year to build – that’s incredible!! It went up at the rate of 4.5 stories per week. Nowadays architects and builders wouldn’t manage it so quickly. In those days it was pre- World War II and it was one of the most ambitious projects ever by mankind. Those who don’t believe it or agree with that, are talking bollocks. I love it. As a kid I read about it, as a Northern Irish youth I couldn’t care less, when I hit early twenties I was eager and when I was 27 I finally decided I would visit New York and see the world from the top of the ESB. 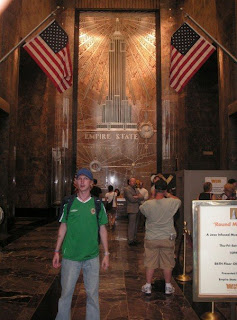 What’s incredible is also some of the facts and stories about the ESB. In its early days it was known as the Empty State Building as a joke because a lot of the offices were left unoccupied. It has appeared in countless films, King Kong and Affair To Remember to name but two. It has also appeared though not in such an obvious way in many songs, such as U2’s New York and Echo and the Bunnymen’s Empire State Halo. It still looks amazing to this day. I wonder how much money they spend on renovating and maintaining it each year? 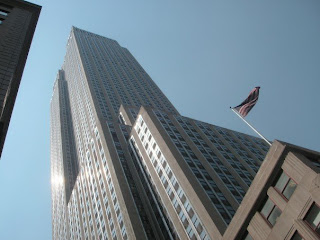 I was staying in New York for 7 days of my world tour and didn’t want to go up to the top on my own, so there were a few options. One was my mate Neil, who was working outside New York at the time. But we decided that we would go for drinks the night we could meet. Another option was one of those guided tours for tourists, but really me being on a budget I didn’t want that. So I decided to visit the Empire State Building one morning and suss it out just, and then go up the next day with anyone in the hostel who wanted to. I entered through the front door and saw the excellent brown marbled walls. I hung around, found out the prices and then planned to go back at a convenient time. The next day was the first day I hung out with Nina and Cassiano from the hostel. Nina was the pretty young German girl I met in Toronto who then ended up also in New York (and was even due to meet me in England at some point). Cassiano was a Brazilian guy. All three of us were travelling alone, so this made it perfect for the three of us to unite. We had spent all day together from 9 am ish, but towards dinner time we decided we would leave Macy’s department store and go to the top of the Empire State Building. I was all excited. 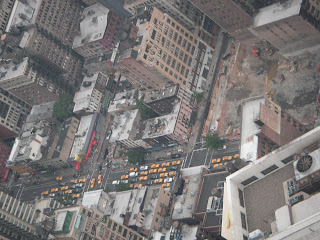 On entering we went up the initial elevator on the right hand side and then bought our tickets. We decided to pay a little bit extra and share the spoken guide between us. It was worth it cos there were three of us to share, but probably wouldn’t be for one. You get your bags checked for explosives and the like on the way up, a good sensible move given the 9.11 ill fated bombings. Depending on which source you listen to, one of the two planes that didn’t hit the twin towers was destined for the ESB. The building that a New Yorker in Dunkin Donuts told me “nobody in New York liked the twin towers, but everybody in New York likes the Empire State Building.” And let’s be honest the ESB is architecturely better on the eye than the twin towers or WTC, or as its now known WTC Site or Ground Zero. 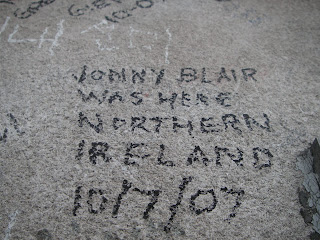 So there was myself, Cassiano and Nina all into the first lift of two going all the way to the top of the Empire State Building. When you pay to go up, its best to enjoy the view while you’re there and spend a good bit of time up there. We finally got out at the top, I did of course enquire if there was a bar up there, but alas there isn’t. Too dangerous I’d guess, since its open plan, and well exposed to air. A week before I had been up Canada’s National Tower and it isn’t exposed to air, all glass and on the higher deck, wires and a sealed roof. The Empire State Building balcony is exposed to the world and that’s what I wanted to see from the top. We took time to get loads of photographs and I met a Scottish lady up there who photographed me with three different Northern Ireland flegs (flags) on display up there. This included the National fleg, a football fleg and our South of England NISC fleg. It got a few funny looks and almost attracted attention from the US population. Well I dreamed I should just attach it to the top of the tower and let myself get into the next morning’s AM newspaper. Then life and love got the better of me and we were walking around looking at and admiring all the nice buildings from every side of the four. Impressive views and probably the most relaxed feeling ever. Just standing their up above all the mayhem and rush hour traffic on a busy Tuesday and watching the world go by. 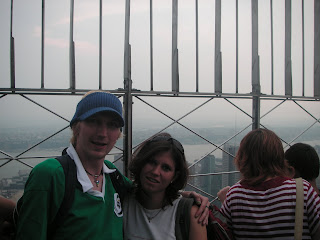 I don’t really have any tips to offer anyone other than: IT IS A MUST. If you’re in New York, don’t go up to the Top of the Chrysler or the Rockafeller Center. Do the ESB! It has more history, its a nicer building and an amazing view. You really won’t believe it even when you’re up there. Probably the scariest bit was seeing an aeroplane while up there. It does make you think about life and what befell those innocent victims just slightly further down in Lower Manhattan on a certain Tuesday in September 2001…

Here are some facts on it:

Total Time: One year and 45 days including Sundays and holidays.
(Ahead of schedule).

Building Alone: $24,718,000
(the onset of the Depression halved the anticipated cost of the building.)

Plan: Base of building rises five floors above the street. The entrance is four floors high. The lobby is three floors high. From the 60 foot setback on the fifth floor, the building soars without a break to the 86 th floor.

Elevators: 73, including six freight elevators, operating at speeds from 600 to 1,000 feet per minute. The total enclosed in several miles of elevator shaft. (It is possible to ride from lobby to 86th floor in less than one minute.)

Air Conditioning: 7,450 tons of refrigeration (The air conditioning was installed in 1950 and upgraded with new equipment in 1984 and 1997).

Water: 70 miles of pipe provide water to tanks at various floor levels with the uppermost at the 101st floor, satisfying average daily demand of 26,500 cubic feet.

Waste Handling: 100 tons of trash and waste are removed from the building each month.

Staff: About 250 persons, including a maintenance staff of 150

3 thoughts on “Empire State Building: A moon is in my head”