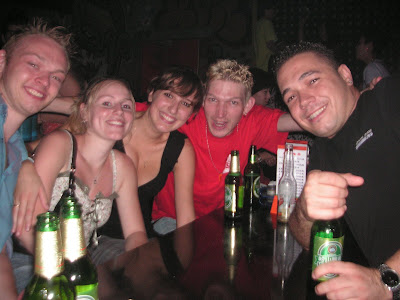 All those days of living in Northern Ireland and trying “a chinky” (local slang for Chinese food and a tad derogatory if truth be told, I’m using it tongue in cheek here by the way) of a Friday night had given me some kind of inspiration to want to visit the world’s most populated (and polluted) country – The People’s Republic of China! I had met quite a few Chinese people before, having worked with a few in Bournemouth and also bumped into some in Canada, USA and New Zealand. So why not give China a try I thought! It couldn’t get more extreme could it? A communist, over-populated country famous for walls, eating dog and extremely good sports like ping pong and Kung Fu. 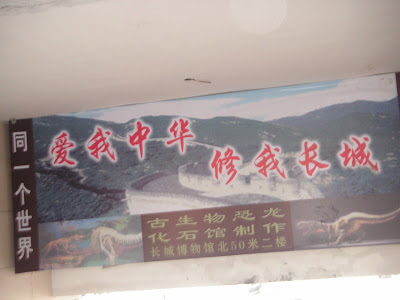 So finally I arrived in the city of Peking. Some call it Beijing. Some call it the capital of China. I just call it madness. Firstly I had to fill in about 6 forms at the airport just to clarify the fact that I am not a terrorist, I don’t have any animals on me and I don’t do drugs! All this after already paying some £40 in London for a Chinese Visa 6 weeks before! Happiness lay ahead, with a beer for less than 50p and a bus for about 12p from the Airport to the central train station. This was surely as nuts as my life could get as a child of 27. 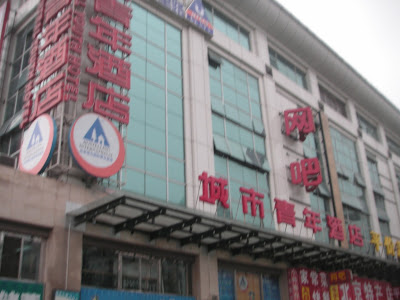 Beijing at first was very daunting. After getting my Airport bus to the city centre, I found myself lost, and a blatant foreigner in a land full of people. Oh my God! Everybody is Chinese. There are no tourists here. Welcome to China Jonny!!! After getting off the airport bus (which must have cost like 12 pence) I was approached by hundreds of Chinese people speaking to me in Wing Wah language. Totally hilarious and I just kept walking till I found an area with no people. This city is very overpopulated! 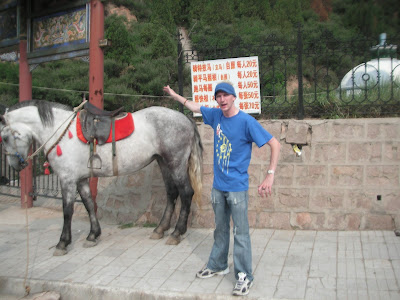 Then after 15 minutes walk I found my hostel. Lucky I booked the hostel first and had a map, as there was no way I could have found one – everything (obviously says the naive reader) is written in Chinese and NOBODY speaks English, ANYWHERE! Which was to be expected but having just come from New Zealand, USA, Canada and England, this was perhaps my first blatant exposure to non-English speaking life since my last Northern Ireland away trip. Except in the hostel of course, where I met Rene from Holland and we explored the city together. The sights I saw were incredible. 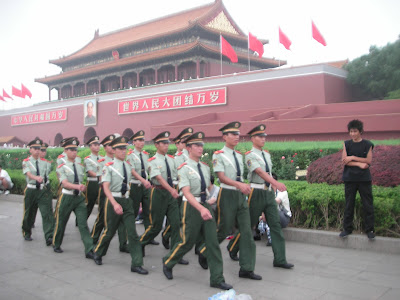 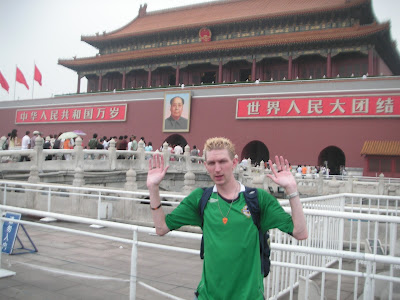 A mandatory visit to Tiananmen Square and Tiananmen Gate, by the painting of Chairman Mao. This place is communist you know. The ladies are only allowed one child each. The ladies all work. The men are nuts and people keep cycling into me. Bruised knee part two. 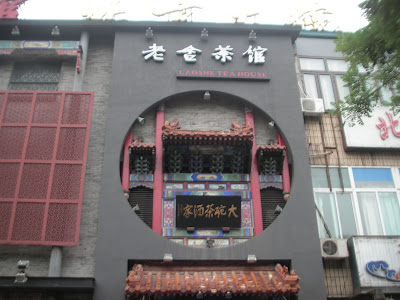 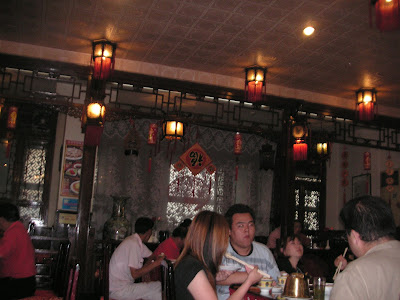 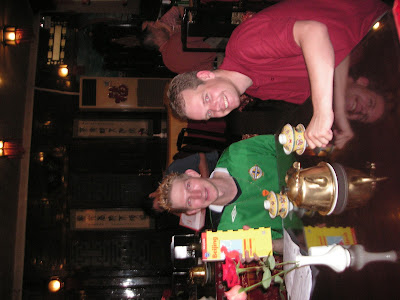 I am a big fan of tea, the Earl Grey being my favourite. But in China, I had to visit the Lao Shee Tea House and try some herbal tea. All the staff were female and being a communist idealogy here, there were too many staff to justify the wages. The tea was an expensive one (for China), costing me about £1. It had some strange herbs in it. But Rene and I enjoyed it. 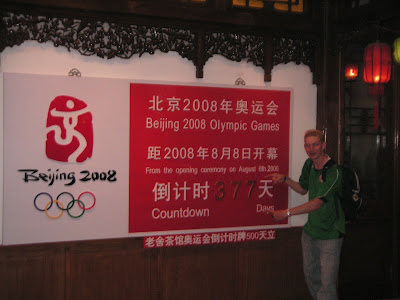 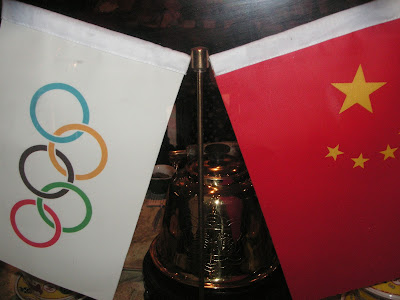 Near the Tea House were many markets on the streets and also a lot of signs for next year’s 2008 Olympic Games, to be held here! I also got amused by how fast Chinese people cycle, walk, drive and speak. Its fast paced, busy and the smoky air can be sickening. Its a smog in a seemingly forever jungle of concrete and dust. 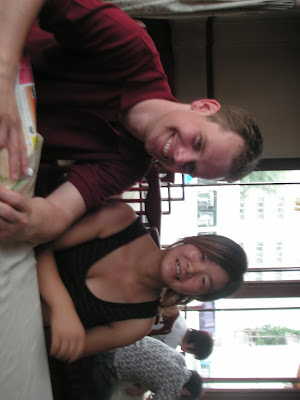 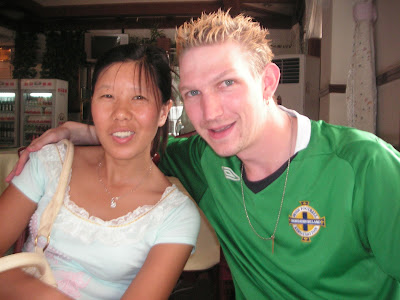 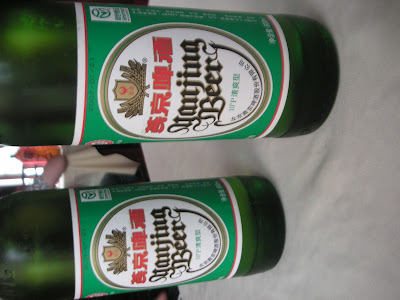 Rene and I dandered through Jingshan Park, near the Forbidden City. We met two nice Chinese ladies, who spoke some English. We went for lunch with them, and tried some Peking Duck (as you do). 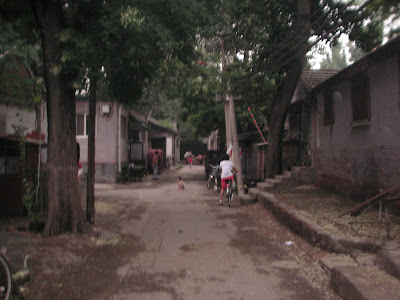 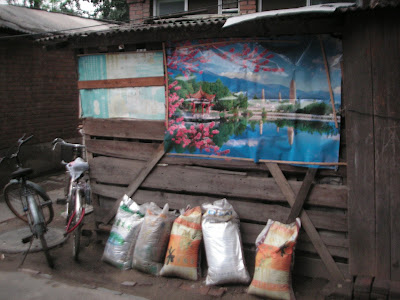 I also saw the Hutongs (run down, back streets, where a DVD player would not be a luxury, rather an alien). Very cool, the houses are barely ‘houses’ that I know of in Western Europe, but that’s their way of life. It had to be seen. The Lama Temple was also amazing to see how many people are so passionate about their praying and their religion. The Presbyterian Church in my Bangor homeland is a far cry from Buddhism… 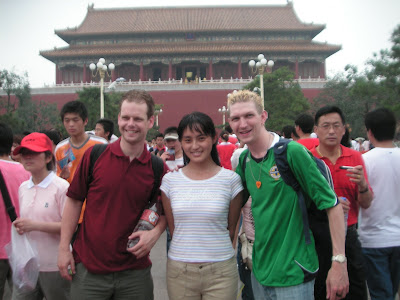 Then there’s the cheapness of it all! 18 pence for a beer in the offy. Thats a carryout for less than two quid. We also partied in Sanlitun Street in a bar called The Tree and 2 other bars/clubs which were a mixture of Chinese and Foreigners. Amazing night out, which I spent with Europeans. I also saw my first camel and visited the Great Wall of China (I went to the bit at Badaling, the busiest part apparently). That said, I was pretty glad to leave China in the hope of getting rid of my migraine, the horrible smoky smoggy air and in search of someone who at least spoke some English. So I flew from Beijing to Moscow. Surely the Russians can speak some English to a beautiful culture drenched Ulsterman…
Bars Visited – The Tree, City Centre Hostel Bar, Airport Bar, Brown’s Pub(!), Peking Duck Bar, Sanlitun Bar.
Beers Tried – Beijing Beer, Ying Sa. Also tried Great Wall of China Wine and many other beers whose names I cannot even pronounce sober.
Nationalities Met – Chinese people only. Though also English, American, Belgian, Dutch, French, Italian.
Transport Used – Taxi, Aeroplane, Bus, Underground.
Strange Currencies – Chinese Yuan (Yen)
Where I Stayed – The Beijing City Central Backpackers (near the train station, and has English speakers and a bar)
Average Prince of a Pint of Beer – I’d guess about 32p sterling. Really cheap.
Favourite Food – Peking Duck, with Duck’s Head served on the plate (gorgeous)
Favourite Drink – (FLAT!) Red Bull for energy.
Favourite Thing About Beijing – People everywhere! Hilarious…
Moving Moment – Stood in Tiananmen Square staring at the smoggy sky and looking around in search of someone else who wasn’t Chinese.
Key Song – Ace of Base – All That She Wants Is Another Baby (how bloody ironic that she cant have one…)
FACT – You cannot see the sun in Beijing. The sky is only smoke, cloud and smog.
Join 15,017 Monthly Readers! If you enjoyed this article and LOVE travel and SAVING money, get e-mail updates from Don’t Stop Living – a lifestyle of travel! (It’s Free) 😉 Jonny

2 thoughts on “Foreigner in Beijing, People’s Republic of China”