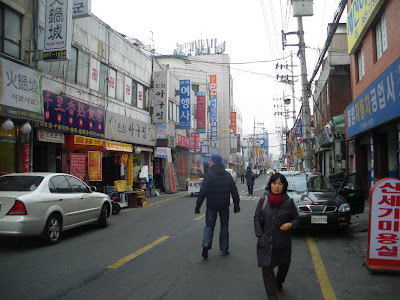 I remember back in 2007 on my first visit to China how I tried to avoid eating dog and was actually   a bit worried about it, in case it was sneaked into some random dish I ordered. However, having travelled a fair bit since, and returned to Asia a few times, including to live in Hong Kong it was time for a bit of international food sampling. I visited Millwall Neil again, this time he was living in Seoul in South Korea. I said to him that I wanted to “try dog” merely just to try it and curb my curiosity. The Chinese and the Koreans eat it. The English and Northern Irish tend to keep dogs as pets only and cringe at the thought of eating them. However it was 2011 by now and we were off to visit the Doghouse. 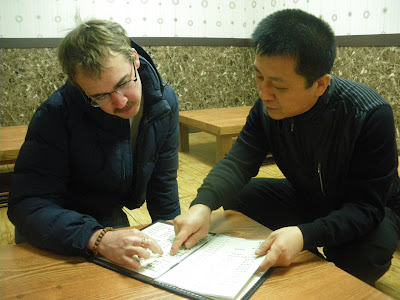 It didn’t take Neil long to find a restaurant in China Town in Seoul that sells dog blatantly on the menu. I could see him checking and confirming with the waiter or restaurant owner just as we ordered a massive dish of dog! “This one is definitely dog” they confirmed. Oh boy it was going to be worth a try at least! 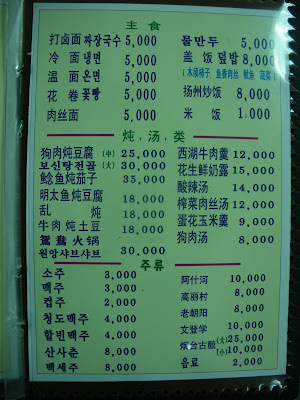 The menu, written in Chinese and with currency in Korean Won. It was a case of who let the dogs out for Neil and I as we ordered a large bowl of “Bosintang” (Literally dog soup). At least it would be in spicy sauce to mute down the flavour in case the dog wasn’t that tasty. Beers were of course ordered! Neil and I were clocking up our sixth country (England, Northern Ireland, USA, Taiwan, Australia, South Korea) of drinking beer in together, across four continents! This run we have kept going has also seen us as flat mates in two continents!! And now we both live in Asia. We agreed to go together to try the dog as we are into these “once in a lifetime things”, the girlfriends Panny and Christina were not wanting to try the dog so it was just the two of us. 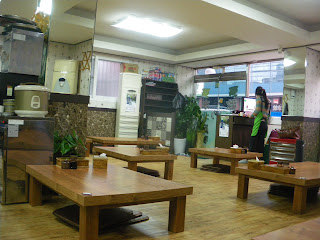 “The Dog House” – The Dog Restaurant we ate in, around 4pm one day. 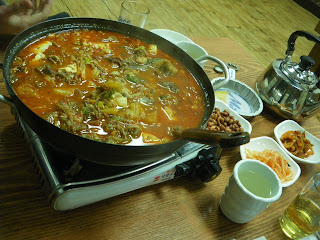 The Bosintang arrived. Basically bits of dog chopped up and mixed into a spicy soup with vegetables. As with most things in South Korea, it came with a few side dishes including vegetables, nuts and kimchi. The beer we chose was Cass, and let me tell you was absolutely essential! 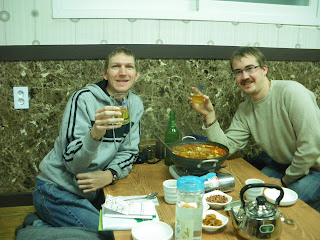 A nervous cheers for Neil and I just before we tasted dog for the first time. 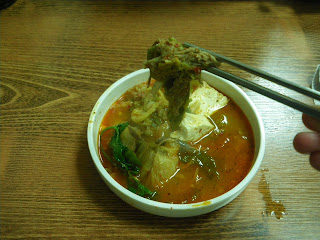 Straight in there – picking out the stringy dog meat from my Bosintang/Dog Soup. 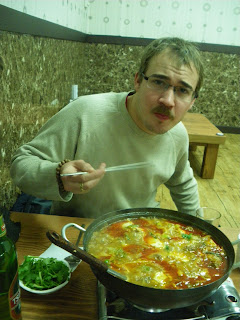 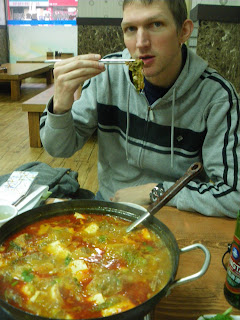 My first taste of dog. 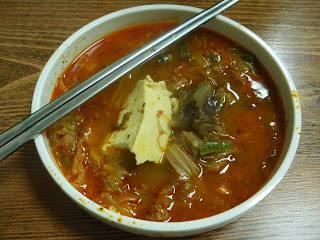 Dog, vegetables, spicy soup, tofu. The nicest part of the entire meal was the tofu! You could taste the dog right through the soup. Its stringy meat leaving an odd after taste. 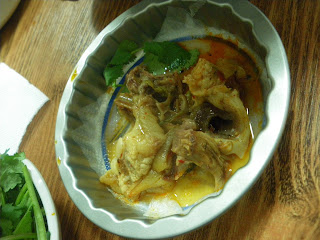 The dog I rejected – these bits were fatty, stringy and there was some bones in it. It was all about trying the dog. That was the idea. I must admit, after a few samples including eating it on its own, eating it with kimchi and eating it with vegetables, I didn’t like it! It was actually rather sickly. It just didn’t taste like any other meat I’d had before and I could not compare it. Neil agreed. We knew we would finish our beers, most of the vegetables and the tofu, but we didn’t believe we would eat all of the dog meat. We didn’t in the end. 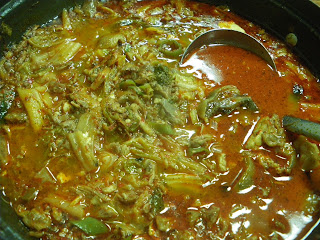 A nice close up of the dog meat soup, Bosintang. 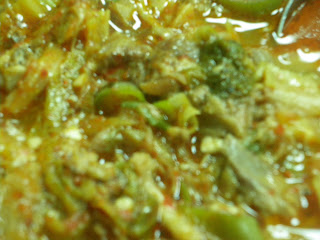 Even closer – stringy cooked dog. Not the most appetising. 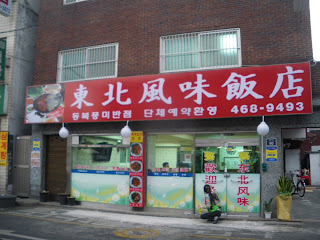 Written in Chinese (and also Korean) this was the restaurant where Neil and I tried the dog. It was merely just to try it and I didn’t like it. So I won’t be eating it again. Dogs are indeed better as pets. I’ll stick to beef, chicken and pork! But thanks to the friendly restaurant staff for the meal. It was time to head back to Neil’s flat to let the dog settle in before heading out for a night out – a mini pub crawl and karaoke in Seoul!
What we ate – Bosintang (Dog Meat Soup)
Some Information On It –
http://en.wikipedia.org/wiki/Bosintang
Boshintang (보신탕; 補身湯), or Gaejangguk (개장국, -醬-) is a Korean soup that includes dog meat as its primary ingredient.[1] The soup has been claimed to provide increased virility.[2] The meat is boiled with vegetables such as green onions, perilla leaves, and dandelions, and spices such as Doenjang (된장), Gochujang (고추장), and perilla seed powder.[3] It is seasoned with Agastache rugosa to remove the stench of dog meat before eating. The dish, one of the most common Korean foods made from dog meat, has a long history in Korean culture, but has in recent years been criticized both inside and outside Korea due to concerns about animal rights and sanitation.
Beer of Choice – Cass
Where We Ate It – Mini Chinatown, near Konkuk University, Seoul, SOUTH KOREA
Key Songs – Mini Album
1. BAHA MEN – WHO LET THE DOGS OUT:
2. PULP – DOGS ARE EVERYWHERE:
3. ADAM AND THE ANTS – DOG EAT DOG:
4. SNOOP DOG – SIGNS:
5. MANIC STREET PREACHERS – BLACK DOG ON MY SHOULDER:
My Video –
MILLWALL NEIL AND I EAT DOG!!:
Join 15,017 Monthly Readers! If you enjoyed this article and LOVE travel and SAVING money, get e-mail updates from Don’t Stop Living – a lifestyle of travel! (It’s Free) 😉 Jonny