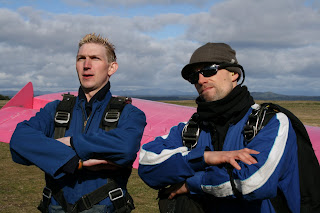 It was never an ambition to do a Sky Dive. It was too scary for me. Imagine jumping out of a plane from thousands of feet up in the air and relying on a parachute to open, before floating past seagulls and landing back on the old terracotta. Well as part of the madness which happens on New Zealand, there must be something in the air that makes you want to do one. So having bungy jumped the previous week and Zorbed a few days earlier I found myself in the middle of a peaceful, tranquil beautiful little town called Taupo. Situated right on the edge of the even more gorgeous Lake Taupo, there is plenty of opportunity to Sky Dive there at the nearby airport, weather permitting. I was fairly scared, but as part of a world tour it seemed a great idea to Sky Dive half way through it, and to do it at the cheapest place on earth – at Sky Dive Taupo! 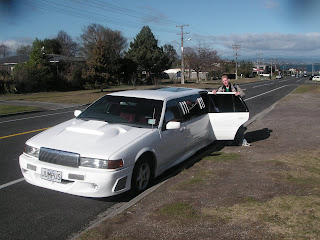 The previous night I had drank with a Scottish guy called Dougie and chatted away to the barmaids in Mulligan’s bar. A few hours before that I had put my name down for a Sky Dive in the hostel. I had no idea what to expect and I certainly didn’t know anyone else in Taupo at the time. I came back from the pub, enjoyed a peaceful sleep in the hostel and rose early for the Sky Dive! I waited in the lounge at the hostel, where I met David Clayton, a South African guy who was also doing a Sky Dive, but was booked in after me. Soon a stretched white limosine had parked outside the backpackers ready for the first five people booked in for 10 am that day, one of which was me! In the limosine I sat down and filled in the form which basically said if I die, then Sky Dive Taupo aren’t responsible. Hmm, not the sort of thing that inspires you as you prepare for your first sky dive really. A few minutes later I was joined by 2 Austrian travellers, who seemed to be in more of a rush than me, so I said they could go first when we got to the airport. 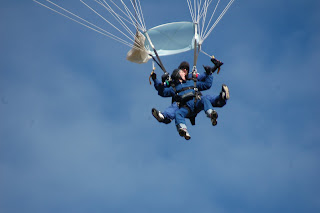 Then I was joined in the limosine by the simply gorgeous Stacie Jayne. An Essex girl who was travelling the world on her own. I probably fell in love with her there and then, even if she didn’t want me to. Then another English guy, Les joined us and the limosine was off! I don’t remember anything at all about the journey to the airport. I think it took about 15 minutes. Once we got out, I got my Sky Dive kit on, which was basically a blue overall and trousers, plus the goggles and some kind of headgear. The two Austrians and Stacie went up first, while we watched a video of someone else’s Sky Dive and tried to calm any nerves with cups of coffee. The guy that would be my instructor, Alex then came over and said hello. He was a really top guy, and totally settled my nerves. I had already decided I wanted a video of the dive, so Alex filmed me where I sang a Northern Ireland football song outside the hut. By this time, David had arrived and we agreed that David, Les and I would get the next plane together. The plane was pink, just to add to the tension. 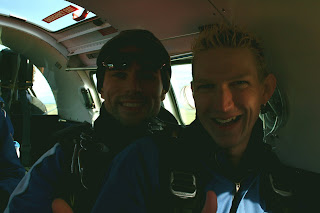 I stood outside with Les as a cold winter wind almost blew us away before Stacie emerged from her Sky Dive, totally unscathed and smiling and crying at the same time “you boys will love it” she said. Then we got a few photos and soon we were in the tiny pink plane heading up towards 12,000 feet. You simply don’t have time to be scared and you can chat away in the plane, even though the propellars are noisy! I really was still staring out at New Zealand thinking “holy fuck in a few minutes I’ll be out there!” I think Les went out first, and I just saw him being swept away like a vacuum cleaner’s suction! I knew I was next and David would be after me! We opened the plane door and I saw my whole life go before me as I let go of everything except Alex, who was on my back! I couldn’t keep my mouth closed! I kept trying to sing football songs while staring down at the world. It was awesome and so windy!

After about 45 seconds the predictably green and white parachute opened and suddenly I wasn’t in freefall and could enjoy the view of the world from an almost still position. I was actually still unaware I could let go of everything! The parachute was now open and I could have danced my way down to the ground at a canter. “Woah baby this is fuckin amazing” was all I could say followed by “its Northern Ireland in the air.” Me and Alex then chatted about everything and anything as it took another 10 minutes or so to come back down to earth. Lake Taupo shone up at me like a piece of glass! You can see the world is round, you can see the beauty of New Zealand and you just see the world at ease. It really is surreal. I couldn’t believe what I was doing!

Then when I landed it was soft and cushioned and I had just endured a totally incredible experience. Everyone out there should do it if they have enough money. I paid about £136, and that included a CD disc of Photos, a DVD which I treasure, a green (but ye can choose any colour) Sky Dive T-Shirt and of course you get an hour of madness!!! The whole time doing the Sky Dive is all part of the experience. The weather, the people, the uniform, the pink plane, the winds, the delays, the nerves, the limosine and the jump. To add to the madness of my morning at Taupo Airport, the rest of the day made complete my finest 24 hours on this planet. After lunch, we walked the countryside to the Volcanoes at Craters of the Moon, then after dinner I got drunk on beer, and later dark rum and cokes most of it was free. As I flirted my way with Stacie Jayne, through an endless smile of dreams…I’ll let the air of Lake Taupo determine the effect of alcohol, volcanoes and sky dives. For me it was a perfect hat-trick. Perhaps for once David Healy was second best…

10 thoughts on ““That’s me, Up In The Sky”: Sky Diving Over Lake Taupo, New Zealand”