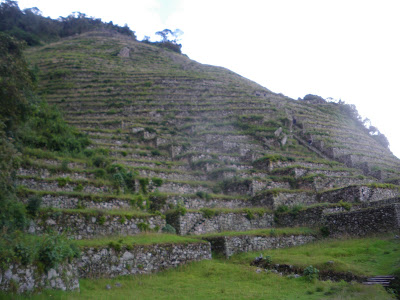 After the highs of seeing the impressive Intipata and the tremendous views into the valleys, it was onwards on that happy walk to the finish line for the end of the third day. 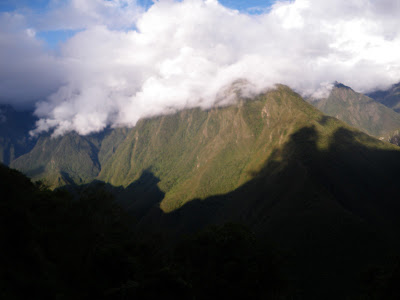 And there wasn’t far to go. 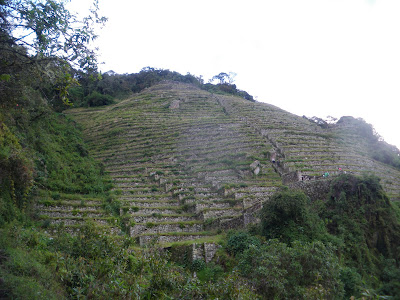 I lost Roberta on this part of the trail, and all of the others as I was very eager to get to the campsite. In fact I wasn’t sure whether the rest of our group was ahead or behind me. There was still a view of Intipata a few minutes later before it disappeared and this sign shot out at me… 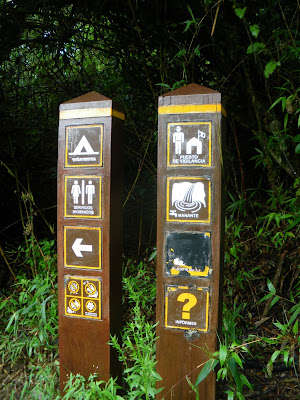 I must have been close to Winay Wayna… 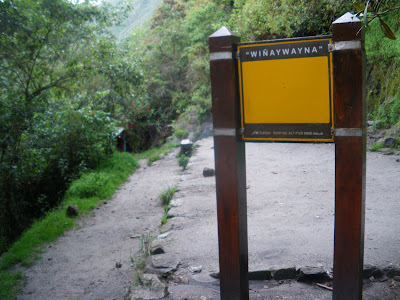 And actually though this sign wasn’t clear, within minutes I had arrived at Winay Wayna. 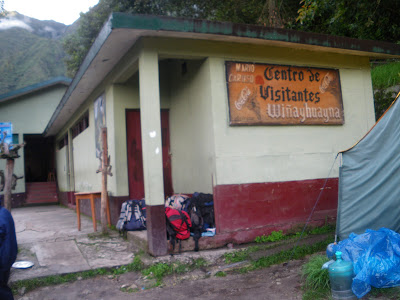 It was murky, dreary and confusing. Then this Visitors Centre showed up! It was the first “modern” style building I had seen in 3 days! I was alone and was looking for our campsite. It was Campsite Number 15 but I found every other number but ours. Actually got a bit frustrated and was tempted to just go into the Base at the Visitor’s Centre which I assumed was where the bar was. 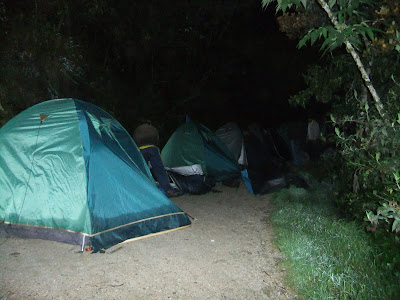 But finally I found the campsite 15 nestled at the back somewhere and by now it was dark. Roberta had been back already and left so I was there alone and chose my tent – would share with my third different partner in three nights – Katie. Nobody else was about which felt odd. I got quickly changed though, donned my Santa Hat and figured something was happening at the base building and it was… 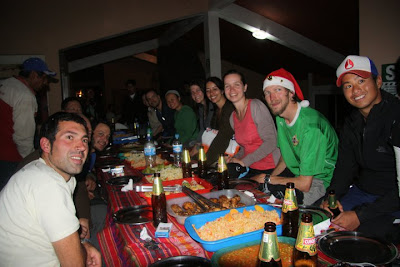 The rest of my group hadn’t made it back to the campsite yet as they had managed to get the big table in the middle at the Base and get the beers in!! At first I was a bit angry that I hadn’t done that myself but now I was in the Base at Winay Wayna, the bar was open, the happinness was clear for all to see and we were having a Christmas Eve party!! 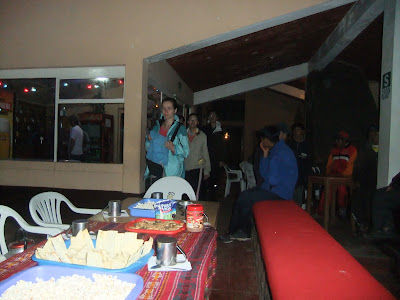 And we had tea and afternoon snacks first up. Then in the cold darkness of the Peruvian valleys there was a real Christmas Eve Party Disco on the go! The most important thing was that the long Inca Trail journey to Machu Picchu was almost complete, we could relax and look forward to the short 6 kilometre descent the following morning.
From – Intipata
To – Winay Wayna
Distance – 2 kilometres
Total distance travelled on Inca Trail – 41 kilometres
Key Song –
BAND AID – DO THEY KNOW IT’S CHRISTMAS TIME AT ALL:
LEAVING INTIPATA:
HAVING A BEER ON CHRISTMAS EVE AT WINAY WAYNA:
CHRISTMAS PARTY AT WINAYWAYNA, WITH AUSTRALIAN MUSIC:
Join 15,017 Monthly Readers! If you enjoyed this article and LOVE travel and SAVING money, get e-mail updates from Don’t Stop Living – a lifestyle of travel! (It’s Free) 😉 Jonny