Totally unrelated and in no way meant to be to the tune of ‘Is this the way to Amarillo?’ My Dad actually wrote that wee song when we travelled to the Greek island of Rhodes in 1990. Life will take us here, there and everywhere. Every day and every time we meet someone new it will have some influence in a decision or an event in our lives at that particular time.

The trip to Greece in 1990 was the furthest I’d been at the time. Growing up in an unpeaceful Northern Ireland had meant sleepless nights and summers spent in Portstewart, Portrush and Portballintrae. All beautiful places in Northern Ireland. Peace and prosperity has allowed Northern Irish people more freedom to travel and holiday abroad. I’m thankful for being the age I am and to have experienced a bit of both generations.

ONE: The generation who was content with licking an ice cream in Portrush and losing money in Barry’s Amusement Arcardes as a summer holiday. Your life as a Northern Irish 1980s kid could not get any better than that, nor would you want it to. Except maybe when Norman Whiteside had a football at his feet, which by the decade’s end would be as likely as a UTV news bulletin without a bombscare, a shooting or a pipe bomb.

TWO: I am also part of the new generation who likes to travel and enjoy new places regardless of the money you’ll spend. I certainly don’t take travel for granted. Give me a trip to Portrush any day. I’ll be the first one to smile as an Atlantic sun shines its rays on the beauty of my Northern Ireland coastline. This generation does it because we can. 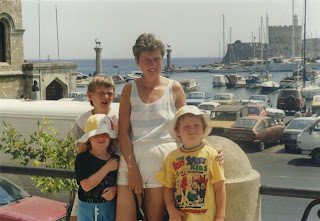 It does upset me a bit that a lot of British kids these days take a summer holiday away from the UK as something for granted! It never has been and never should be. My Mum and Dad went to Bangor or Millisle for their holidays. Their generation could teach us all a thing or two about manners, priorities and settling for what you have. They may even have a better story to tell about a trip to Bangor (from Belfast) than some 18 year old Brit who went to Ibiza and got leathered. The point of all this? Just really to say that when I had my first long distance holiday away from the UK I was 10 and I totally enjoyed it. I had been before to England, Scotland, Wales, Republic of Ireland on holidays, but also to Portugal (Algarve as a 1 year old hardly serves for a vivid memory) and France (too young to care) and now I was flying to Rhodes in Greece for a week in the sun with my family. In a way it was the end of an era of summer times in Portrush and the beginning of the 1990s. A generation who would survive without a mobile phone and would gladly recall the day that little Blackburn Rovers won the Premier League title. 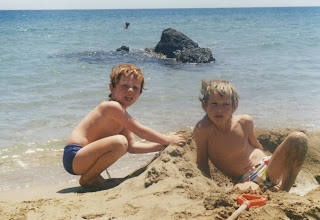 We arrived in sunny Greece in July 1990 and I had a camera at the time! It was a present from Aunty Margaret. I loved it. In those days another rare thing was obsessant photos. Perhaps the ones we have are worth more to us now. Fond days included visits to the Greek town of Afandou, which was at the bottom of a hill and we used Drachmas. It is situated about 15 miles from Rhodes Town, the capital of this ancient island. It was very different. I remember fondly swimming in a half-built swimming pool called ‘Edelweiss’, trips to the beach, eating Greek pitta bread at a place called ‘Granny’s’, playing crazy golf and dandering round the streets of the capital, where I bought many souvenirs of which some have survived. It was a truly memorable time. I also used to kick ball by the pool while Dad would grab a nice beer and Mum would sunbathe in the Greek heat.

Looking back 18 years on, this was my only ever trip to Greece. I was due to go there in October 2003 to watch a Northern Ireland match, but this had coincided with starting a new job and was near the beginning of my University degree. I feel it was the beginning of travel in a big way. From then on, travel agents and travel compaines have been a growth industry. I think the song went:

Bars Visited – Granny’s, The crazy Golf bar, Edelweis and one near the beach!

Beers Tried – I was 10, but my Dad used to let me have some of his. I enjoyed those sips!

Where I Stayed – In an apartment in Afandou’s outskirts.

Moving moment – kicking ball against a wall by the pool at Edelweis thinking I still could be the next Norman Whiteside.