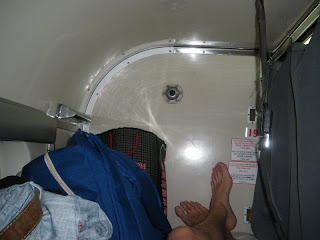 It was all a big rush leaving Singapore. We had been to Night Safari, leaving it around 8.30 pm, having to get to Keppel Road Train Station for our 10 pm Singapore to Malaysia sleeper Train across the border into Malaysia and Kuala Lumpur. WE had left it tight, and we had also left our bags at the hostel. By luck and chance we got a Bus 138 from Singapore Night Safari at Mandai Lake Road to Ang Mo Kio Interchange (featuring the busy MRT station). The area of Ang Mo KIo had a lot of housing blocks and flats, and looked very different to the rest of Singapore. We didn’t properly tour the island, or even go to Sentosa while in Singapore. We spent most of our time in the main city centre, bunging in as many sights as possible there. In a hurry that night, we also passed through a village called Selatar, again much different looking from the main city, and even the people and shops in that area appeared to be slightly behind the times and away from the commercial, modern aspect of Singaporean life. 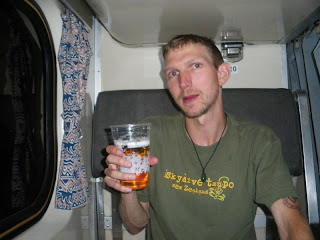 At any rate, we had no time to waste and we didn’t waste any time. Running from the bus to the train, we were on the MRT to change just once, and arrive back at Kallang. We had 30 minutes before the   Sleeper train, and were on the other side of town! Once back at the hostel, we had only one option left, to get Kelly on reception to call for a taxi ASAP, and she did, bless her and soon we had a taxi outside, a 10 minute drive across the lights of the big city and safely into the elegant Keppel Road station direct to a queue for our train. A queue which was long and already featured people from many different races. We were all bound for Kuala Lumpur in Malaysia, or Bangkok in Thailand. I quickly got our tickets (e-tickets) ready for the Sleeper Train, but I just couldn’t find my passport anywhere, and once we got to the front of the queue we had 2 minutes before 10 pm, and the train’s scheduled departure time. I had no passport and border control were questioning me. In front of a massive queue I emptied the contents of my pockets and my entire bag everywhere. I still couldn’t find my passport. Natalja of course had already gone through, had her stamp and everything. This was only the first of two passport checkpoints leaving Singapore and entering Malaysia. 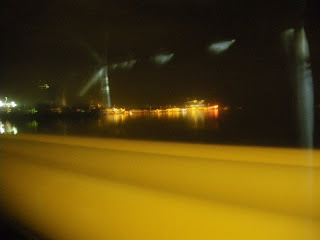 Finally with sweat dripping down me and all my belongings in no order on the dirty ground, I found my passport to great relief. It was all such a rush but we had done it! Passed through the first part of Passport Control, we left behind the architecturally eye catching Keppell Road station and boarded the Sleeper Train out of Singapore. Equipped with my KTM e-ticket, which I had booked online a few weeks before, and my British Passport we could board with our bags and find our beds for the night. We had booked the “Ekspres Senandung Malam”, the number 12 service, which is basically an express train, taking in the big cities only. As far as I could tell this meant we would only have two stops, the first of which was border control and the second of which was our stop. Here was the route: 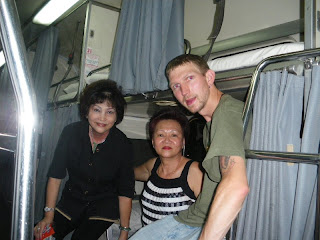 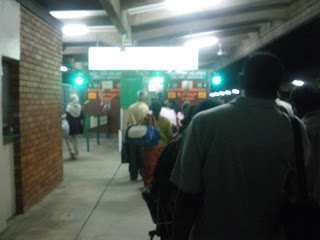 This would make the journey time around 7 hours, taking out the time for passport control. Previously it had taken 7 and a half hours during day light to go from Kuala Lumpur Sentral to Singapore, stopping at numerous stations on the way, and even giving us time in Gemas to see the small city (if we had so desired). By 6.23 am, we would be expected to arrive in Kuala Lumpur. We boarded our “coach” part of the train. We were in Coach L5. We had two single beds booked. You couldn’t book a double bed. We weren’t sure whether we would have our own room, or be sharing or be out in the open. In the end, it was just a normal looking train, with an aisle corridor and the beds, all open on either side, in two layers: a top and bottom bunk. We were in beds 19 and 20. I was on the top, Natalja on the bottom. The cost of the single train journey (an its own) was 86 Malaysian Ringitts for both of us. This works out at around £9 per person, which is great for travelers as it means you don’t have to book accommodation for the night. Its a good tactic to use while traveling – use night trains and sleeper trains – it means you save money on accommodation, you see more during the day time and you also save time, as you’d have to travel and sleep anyway. We were in second class air conditioning carriage. There were about 5 options, first class included your own separate room and showering facilities. I was happy to be in second class, mingling with the locals in a sleepy night time corridor. 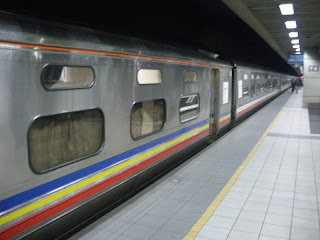 It was all ladies in the area around us. I didn’t see any guys in our carriage. Natalja and I looked sweaty and knackered, and you’d have thought ready for bed. We had some cake, crisps, water and beer to consume, and though I was tired, I was loving being on board the “Sleeper Train”, a unique experience. I wanted to stay up for a bit. The ladies near me were Taiwanese and they were shocked to learn me tell of our trip to Taiwan and how we loved the place. They spoke basic English and through that we could hold a conversation. Natalja had some dried fish left over from Taiwan (the previous weekend) and gave them as a gift to the ladies. Their gift to us was life and wisdom. It was worth it. I treasure these types of train journeys simply for the people you meet. The ladies were all over the age of 40, and I didn’t catch their names. I think they enjoyed our company too, realising from Europe to Asia was some difference for us, and we had enjoyed their hospitality. The train left about 5 minutes late in the end, and within 20 minutes we had made our first and only stop on route. We were still in the country of Singapore. 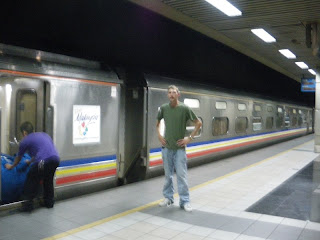 The stop was for customs and passport control on the Singapore – Malaysia border. Just as we had done on the way into Singapore, we needed to get off the train and go through customs with our immigration cards. Malaysia and Singapore have very similar immigration laws for UK citizens. Basically you can stay legally for 90 days in both countries without a VISA. It is the same for most EU countries, including Estonia. The difference on the way back into Malaysia was we didn’t need to take our bags off the train. Malaysia is less strict about what comes in, which is predictable given the strictness of Singaporean laws. On the way into Singapore our bags were all scanned and nothing could be left on the train. To be honest the getting off the train thing to go through border control is a pain in the ass, especially if any of the passengers had already gone to sleep, they have to waken you up. But none the less I understand why they do it, and it all adds to the experience. Its fair enough. The station we stop at is called “WOODLANDS CHECKPOINT”, its situated in the north tip of Singapore in the “Woodlands” area, just before the train goes over the bridge into the totally different land known as Malaysia. Its an ideal place to do the border control, to be honest. Anyone who doesn’t pass through, then has to stay in Singapore, or if coming the other way, 5 minutes north on a train they are back and held in Malaysia until they are given the OK to pass through. So off the train we got! 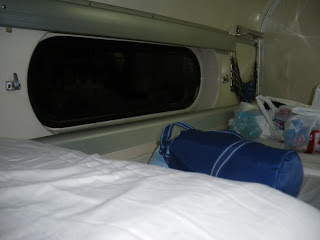 The queues for Passport Control at Woodlands Checkpoint are long, but you just go through and hang around until given the all clear. All passengers must be checked through before anyone can re-board the train. On the way into Singapore we got a rectangular purple stamp and the second part of the immigration card which you must keep until you exit. The lady took my Singapore immigration card off me, and stamped a circular green “IMMIGRATION DEPARTED 1744 SINGAPORE” stamp on my passport. The next part is to fill in an immigration card for Malaysia, which is then surrendered upon exit of the country. I enjoyed passport stamps and moments where the passport lady stares at your face to make sure its the same person. You couldn’t mistake my eyes or nose, for sure. Within 20 minutes we had got back onto our “Sleeper Train”. At this point I joined Natalja and we enjoyed the night view over Singapore bridge into Johor Bahru, the Malaysian river city right opposite, which overlooks the Selat Johor: the river border between Singapore and Malaysia. We were now in Malaysia. 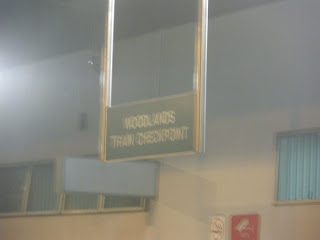 Each bed has its own curtain, light and window out. Most people had gone to sleep and the carriage was almost in darkness. The bed opposite me on the top had nobody in it, so I put my luggage all up there – there was no obvious place for our luggage near our beds – at least none that I felt was secure enough! I opened up my tin of Tiger Beer and drank it from a plastic glass we had taken earlier from a shop at Clarke Quay. It was an nice end to Singapore – a country I’d seen all I wanted to in, and I’m not sure they’ll ever be a need to visit it again, we shall see. Once the beer was finished I made myself comfortable on the white sheets above. I enjoyed lying towards the window, savouring the darkening view of Malaysian lit up countryside before my weary Ulster eyes sent me into my dreams.


And that was it, I didn’t waken up again until 6.31 am, by which time we had just arrived in Kuala Lumpur! We had a minute to put our clothes on, grab our bags and exit the train. Another big rush for us, but we could relax once we were off the train. The Singapore dream was now over…and the dreams of Batu and Kuala Lumpur were beginning.


What was it? – Sleeper Train from Singapore – Malaysia