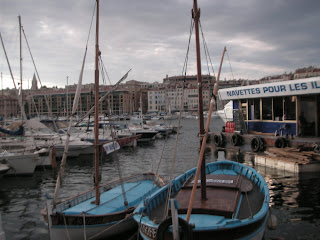 The trip to Marseilles was class. I caught the TGV from Paris Gare de Lyon at around 11 am, and by 3pm that afternoon I was in sunny Marseilles on France’s South Coast. These high speed trains need to be done!

The journey down was so fast, I grabbed some photos of the lovely landscape, listened to my iPod, tried croissants and sandwiches in the restaurant and had a beer in the bar. It’s up there with the Minsk – Bobruisck train journey as one of my favourites.

When I arrived in Marseille I had NO idea what to do. I thought I’d check out the beach and harbour, so I escalated down to the underground and made my way there. The underground system in Marseille, only has three lines (if memory serves right), but its one of my favourites. As coincidence would have it, the stop I got out of (in order to catch the bus to the beach) was a two minute walk from Stade Velodrome, home of Olympique Marseille. Marseille had played Glentoran here in 1992 (the year they won the First Ever Champions League), winning 3-0 to follow up a 5-0 mauling at The Oval, so I went to visit the stadium. Being the cheap traveller, there was no way I was paying for a guided tour, so instead, circled the stadium, took some photos and basqued in the hot hot sun. Sweat was dripping down me, so I headed to a wee bar near the stadium to chill out. The bar was ‘Brasserie du Stade’ and is busy when Marseille play at home. It was in there that I spoke to some English people, which is soon why I realised accomodation for the night was going to be a tough one. France were due to play England in the Stade Velodrome as part of a Rugby World Cup pre-tournament friendly. A load of English tourists had arrived in town for the match! I was even offered a ticket, but declined as (A) I hate rugby (B) I had already booked my place on the 5.20 am TGV back to Paris the following day. I’d of lost 3 Euros and the chance of an extra two days in Paris. I could see all I needed in hot Marseille in a day. The beer wasn’t cheap in there. 3 Euros for a half-pint, at least I got to visit the Olympique Marseille club shop and see some photos in the bar of the former squads. 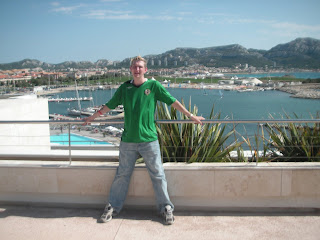 Then I tried to find a hostel to stay in, but strangely the only two I found were full. Every hotel seemed to be full as well, so something was up. It couldn’t just be busy BECAUSE it’s sunny, it’s Mar Say, it’s August and it’s a Thursday night. Or could it? Obviously it was the England rugby match. This was to be the most expensive accomodation for one night on my travels (71 Euros for a twin room in a lovely hotel called Resi Hotel). I could of stayed up all night I guess, but I was tiring in the sun, and needed a wee kip to prepare for the madness of Paris. The days were running so smoothly and I was enjoying the time so much.

Then I spent some time on the beach – well I had no swimming trunks with me, so just lay there in my boxer shorts. I didnt go all the way in for a swim for this reason! I dipped my feet in the Meditareanean though and stared at every pair of breasts I saw. A lot of nice topless ladies about, I also checked for celebrities as Marseille attracts them, but I didn’t see anybody famous. I took a walk along the strand, no doubt getting burnt in the sun and starting to sweat heavily. 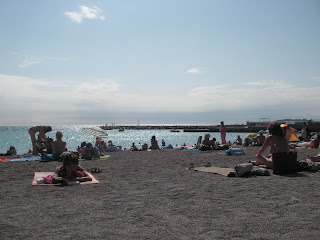 A quick shower and some cheap grub and postcard sending and I was soon freshened up. I wasn’t going to spend 71 Euros on a hotel and just sit in, as I wanted to check out the city. Some amazing traditional French streets lead us down to the main harbour, which is a beautiful sight in itself. I don’t normally do ‘Token Irish Pubs’ as they are often overpriced, but O’Malley’s was opposite the harbour on a sun drenched evening and was also having HAPPY HOUR until 9pm, after which I figured I’d leave and go back to the hotel. O’Malley’s was a nice pub, and for 3 Euros I was drinking Kronenberg (Red) and getting free olives and nuts. I was also probably the most Irish person in there. I then got taling to a few English rugby fans who were over for the match, including Alan Fisher from Scunthorpe. They let me join them for a drink and we talked about all things football, UK and Northern Ireland. I was about to head just after 9pm (Happy Hour had gone…), but Alan convinced me to stay, supplying me with beer. The kindness of people you meet in life is amazing. Just by mentioning I was a young traveller on a budget who had just blown 71 Euros on a bed and a shower, Alan was only too happy to help out with the beers and later some free pizza. I left there at last orders and headed back to the hotel (which was about 30 minute walk) via the high streets, so I could get a nice view. The photos never came out due to the darkness, but the view of Marseille harbour was amazing, from the top of the hill. I then managed to get lost and made it back to the hotel for around 1 am ish. I then woke up just after 4.29 am, and headed for the main station for to catch my TGV at 5.20 am. I made it on time and also managed some kip on the 3.5 hour trip back to Paris. 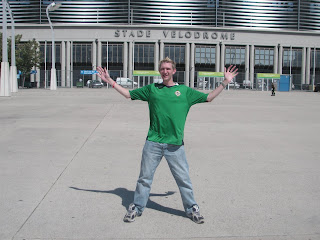 Marseille had been and gone in a flash, but it was an amazing day trip to a vibrant and picturesque city.

Where I Stayed – Reluctantly at a busy time I booked into the Hotel Resid for 71 Euros (OUCH!) for a night. Given the nights on airport floors, hostels, trains and Rene’s place, it was almost due to hit me…

Average Price of a Pint of Beer – 6 Euros a steep and expensive place.

Favourite Drink – Water. In this heat my Northern Irish frame was wilting more than Wiltshire.

FACT – Marseille is the second largest city in France and the largest commercial port in France.