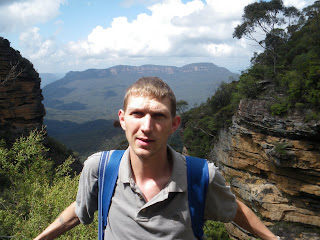 The village of Leura is the next stop down from Katoomba, our base while trekking the Blue Mountains. We visited Leura twice, once just to walk around the town and a dubious area called “the everglades”, and on this occasion we did the treks round Leura, which included a few waterfalls, many hikes and some wildlife. Again the day started early with our walk from our hostel on Bathurst Road, Katoomba, down some side streets until we arrived at Fossil Rock lookout in Leura. This was situated at the top of Prince Henry Lookout and we headed east along this path to check out the Leura part of Jamison Valley. 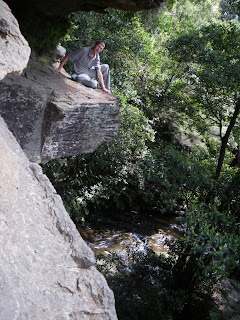 There were a number of excellent look out points on this trek – we were at the top of the cliff so the views were excellent. The weather was mixed – hot but not always sunny. We stopped at almost every lookout point on this trek, including Majestic Lookout and Elysian Lookout. We also stopped at a few of the rocks, one called Tarpeian Rock, which doubled as a lookout point. Here we got suddenly surrounded by black lyre birds. It was a funny moment. 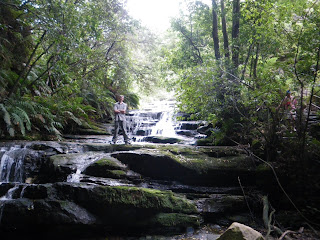 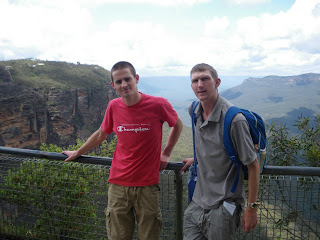 It was a tad dangerous, but a nice view and a good place to pose for photos. After this we ventured through the Leura Cascades and Leura Falls itself (a much smaller waterfall than Katoomba Falls, Wentworth Falls and Govett’s Leap). The next waterfall flowed down rocks in the shape of a bride’s veil, therefore it was called “Bridal Veil Falls.” 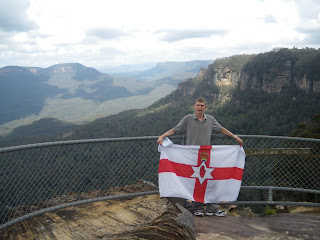 Past this was Gordon Falls Lookout and more trekking through forests, all at the top of the cliff face. We got round to Gordon Falls itself and the Golf Links Lookout, before deciding to do 2 of the short walks in the area. The first of these was basically the walk near an area called “The Everglades” and it was labelled as The Pool of Siloam. It took us about 20 minutes and was a short trek to the pool. Basically the Pool of Siloam was a puddle of water below some rocks. It was nothing to write home about! 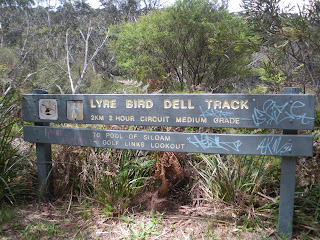 On round from the Pool of Siloam was a walk to what was known as the Lyre Bird Dell. This too, was misleading and disappointing. We saw no birds there, when we were kind of expecting an aviary. These Australian names make things sound better than they are. We stopped for lunch on the benches at the end of the Leura entrance to the Jamison Valley. After that we decided the museum in the are might be worth a visit. We got to the front entrance to the Leuralia Museum, and it was basically a “toy and railway” museum, nothing to do with Leura or indeed the nature of the Blue Mountains region! 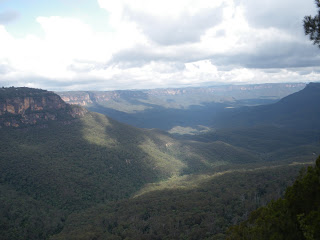 It was also 12 Australian Dollars to get in, so we gave it a miss. Opposite the museum was a small park with turnstiles and a 2 Dollar entrance fee. There was a sign up saying “THE BEST AND MOST SPECTACULAR VIEW OF THE BLUE MOUNTAINS.” Dan and I looked at each other and thought that we had seen enough great views and that it was probably a con. But I decided we should both squeeze through one turnstile, pay the 2 Dollars and if it was shit, get our money back. So we went through the turnstile, reluctantly paying 2 Dollars. In there was steps down to a narrow opening which you could see the valley from. AND THAT WAS IT! It was hardly the best view, it wasn’t even a view in my opinion. The view was so bad, I didn’t even take a photo of it. 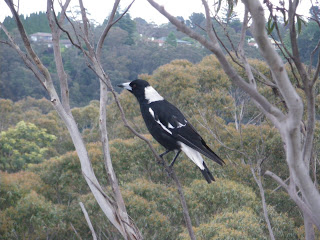 We had seen much better views for free on the various treks we had done. What made the view’s claim more unbelieveable was the fact that right in front of what they classed as “the best view” was a bridge and trees, which blocked “the best view”, and this was a bridge that is free to walk on and that we walked along twice. From that bridge there actually is a decent view. AND ITS FREE! So I was upset and went in to complain to the lady on reception in the museum that the view was “pure shite.” Not only did she give me my money back, but she paid us back 4 Dollars, when we had only spent 2 Dollars. Fair’s fair, we left 2 Dollars up and had seen the “best” view of the Blue Mountains. We had also completed all the treks in this part of Leura so it was back along the Prince Henry Cliff Walk. 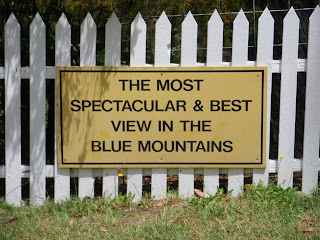 The trek along the Cliff Walk would lead us to the actual starting point of The Three Sisters (3 famous natural stones at the edge of one of the cliffs), where we could touch the first sister and then trek down into the valley using the tasking and steep Giant Stairs. The route round to the Three Sisters rocks was full of Lookout Points. We stopped at nearly every one of them. The first one was Copelands Lookout which reminded me of Donaghadee in Northern Ireland which has a boat over to the Copeland Islands, a set of small islands near my home town. 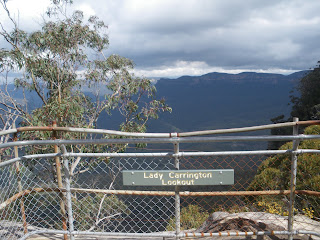 We then past Jamison’s Lookout, Lila Falls, Burrabarroo Lookout and Labardo Lookout. Next up was the romatically titled Honeymoon Lookout, on two tiers. It was a decent lookout point, one to take the missus to I guess. There was no time to hang around and we trekked on round past Millamurra Lookout, Talla Lookout and Lady Carrington Lookout (on two rocks). We saw a snake in this area, a black tiger snake, though it wasn’t a particularly hot day. From Oreades Lookout is was a few more kilometres round the cliff side to the Three Sisters. The Lookout point at the 3 sisters is called Lady Game Lookout. Thats where we met all the tourists, reaching over to touch the rock. So we did the same and touched the Three Sisters. That was it. There was no mini museum or signs up, merely one saying “no abseiling or cliff climbing.” 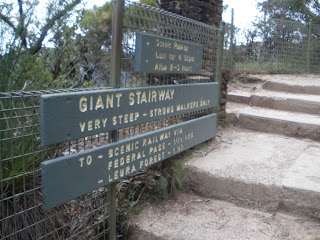 It was there where the entrance to The Golden Stairs begins. We looked down and saw how steep it was but we were on a mission and decided to bomb it very very fast. To get to the bottom of the Golden Stairs its recommended to take 30 minutes. It only took us 10 minutes, working fast down the cliff edges and pre made stairs to the base and the Dardenelles Pass. That day we had decided to make a dash for it and make the last train back on the Scenic Railway – the world’s steepest railway. We moved pretty fast, covering 5 kilometres in 45 minutes or something. There was no need to stop at any lookout point, just change onto a different track at one point, we were on the Federal Pass and the base of the Furber Steps. We were deep in the valley, and made it in next to no time to the entrance to the Scenic Railway…only to find it was shut. 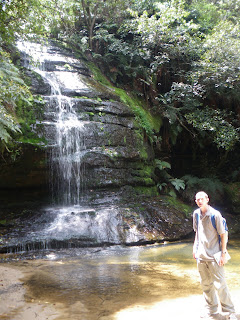 A day of over-rated treks, pools that are puddles, giant stairs that weren’t that giant, a view which cost 2 dollars and then to cap it all off, a train station thats shut. Still we did it all. It’s not a bad old life is it?