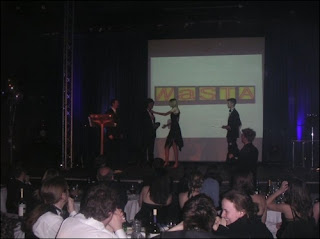 It was March 2005 and I was in Poland’s capital Warsaw on my 25th Birthday. I had taken a mobile phone with me, but didn’t expect to use it. I turned it on just to check and I had received a text message from Jason Hawkins, head of media at Nerve Media, Bournemouth University. I had worked on Nerve (a University Media Company based at the Student’s Union) since September 2003, mainly as a radio DJ, but I also did a few articles for the magazine and appeared on two TV shows. The text message was inviting me to the National Student Television Awards the following day, in Loughborough, Leicestershire. The question was would I take the final place to represent Bournemouth University? Hell, yes!!! Count me in. As it happenned I didn’t have any credit on my mobile telephone, so I used the phone in the Warsaw hotel to make two calls. 1. To Phone my beautiful girlfriend Lauren to see how she was and 2. To phone Jason Hawkins and tell him ‘Yes’ I’ll be there. 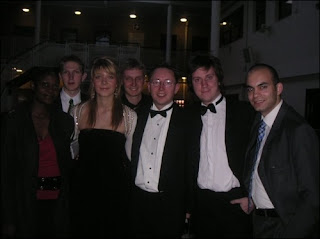 The question then remained how would I get there and where on earth would I meet? Life’s spontaneity throws these things up in the air and make it so interesting. Anyway, the birthday passed, I stayed up all night after coming home from the Poland v. Northern Ireland match, mingling with all the Northern Ireland players and ending up in a strip club. Suddenly I would be needing to go to Warsaw airport for the flight we had booked to London Luton. I don’t remember the trip from the hotel or even the flight. But there I was on Thursday 31st March 2005 in Luton Airport. I looked for the next train to Loughborough, and low and behold there it was coming. I hopped on and had also just topped up my mobile telephone. It turned out that Jason and the other Nerve crew were on the same train as me to Loughborough. I think we changed at Leicester, but I didn’t meet the others till we got off at Loughborough. Then we ran and caught a bus. I was clearly still drunk from the night before as I got my portable stereo out and pumped ‘Is this the way to Amarillo?’ on it on the back of a crowded bus. That’s where I met Jason Hawkins, Paul, Eric Johnson, Alex McKee, Rachael Ward and Sandra Kabazinguzi. I already knew Jason, Alex and Sandra. The others were new to me. Soon we had got off the bus at Loughborough University where we would stay two nights. I didn’t have to pay accomodation or breakfast and we had two nights out planned! I desperately needed sleep, so I caught some while the others went to the introduction to the NASTAs. I met up with them in JD’s, the student bar, where Sandra, Rachael, Alex and Eric represented Bournemouth in the drinking competition. They didn’t win, I think they came second or third. 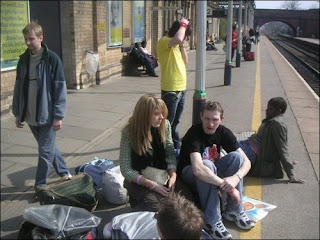 Basically the whole event was the NASTAs (National Student TV Awards) and I was proud to be invited to it! After a few beers in JDs, we headed into the town centre of Loughborough (we walked down and I remember talking to the Scottish ones from GUST). Then we did two bars before hitting the dancefloors of Pulse nightclub. That was a fantastic night. Most of the people in there were part of the NASTAs night and drinks were £1.50! I got leathered, and remember vividly dancing with my Northern Ireland fleg to ‘Is This The Way To Amarillo?’ with Rachael, Alex, Sandra and co. We were bonding like life was forever one big party. The night soon ended and I grabbed some sleep, before being the first one to get up, and for a good reason… 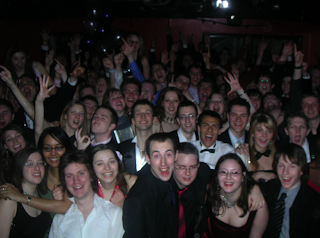 I got up earlier than everyone else because I didn’t have any formal clothes to wear for the big awards night later that night (I think it was Friday 1st April – no fools jokes this time). I got a bus into Loughborough town centre, and enjoyed a walk round the streets. I needed to buy a white shirt, a black suit jacket, black trousers, a tie and black shoes! I hadn’t packed any of that stuff for my birthday trip to Manchester, London, Berlin and Warsaw because I hadn’t banked on needing to dress up. It was going to cost me loads, and as a student who only had one job at that time (though later in April I’d be working 50 hour weeks again), I was on a quest for cheap stuff. All the other Bournemouth Nerve guys met me for lunch in McDonalds, and they couldn’t believe I had managed to get my ENTIRE clothing for that night for £38!!! Here was the breakdown:
– Black suit jacket for £2.75 in charity shop
– Green tie for 75 p in charity shop
– Black shoes for £19.99 in Shoe Zone
– Black trousers for £8 in menswear shop reduced section
– White shirt for £4.50 in menswear shop
I was all sorted for the night! 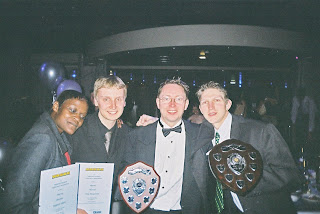 We caught a bus back to the University Halls of Residence where we were staying, and I tried all my stuff on, which fitted! I also bought a carryout of 4 tins of Carling, which we drank in the ‘kitchen’ part of our temporary residence, as we laughed at a dude from the Glasgow group. A ginger haired geek type, who strangely was up for the Best Male Category, against our Eric! Eric Johnson! I wasn’t actually up for any awards, nor was I a hanger on. By being in ‘The Lock In’ on Nerve TV, by DJ-ing on Nerve Net and Nerve FM and by contributing to Nerve Magazine, in many ways I was a big part of the phenomeneom, while the bandwagon rolled and rolled. After a few beers, we had our tickets, our name badges and made our way down to the main awards ceremony. In the afternoon we had also had a tour of the university. 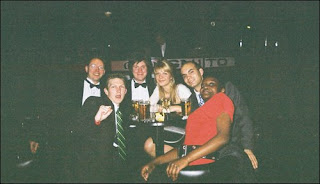 We got some free wine and champagne on entry and I also bought a few beers, as we aimed to make it a big one! We had our own Nerve table, which was great. It was like being at The Brits or something! We could heckle the other student groups. For one night only it felt good. It felt prestigious. Then the hosts from Lufbra (Loughborough) came out and gave their speeches and started into the awards nominations. Nerve were up for most of the awards, with The Lock In featuring in Best Live Award. We really should have won that one, but somehow Glasgow won it! That was my short moment of fame, as a clip from The Lock In came onscreen for 30 seconds or so and there I was being screened to everyone! I enjoyed that, as one does. 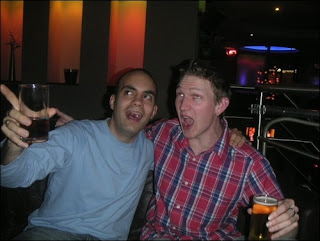 When the Best Station Ident Award was announced, Nerve had won! Jason didn’t want to go up. I certainly DID want to go up, so I went up with Alex and Eric (I think) to collect it. It was at this point in my life where I decided to do an Alan Partridge Ricky Gervais style speech, which nobody except me would find hilarious… 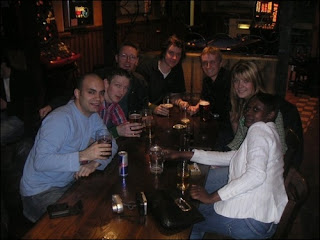 I think the speech was something like “Thanks for this award, even though I didn’t do anything to get it. We’re from Bournemouth and we’re all going to be over there spunking off monkeys. Oh and 4-0 and you still don’t sing? Glory Northern Ireland!” Not sure how it was received, Alex and Eric said some funny stuff too, as we held onto the microphones for a bit. It was great. Soon we were up on stage again picking up an award for Best Title Sequence. Perhaps it was Sandra and Rachael who picked that one up. By this point I was getting drunker and drunker and had now downed a bottle or so of white wine and copious beers, while I moved onto VK alcopops, as the show progressed. I remember some awesome tunes pumping on the stereo as people went up to collect awards. There was a hot girl from Leeds up dancing to Lift Me Up by Moby. I remember that well. We went up, ironically to ‘Is This The Way To Amarillo’?, while Oasis’s ‘Lyla’ also got an airing in a night that will forever be ‘my Brit Awards’. We may lose and we may win, but we will never be here again. 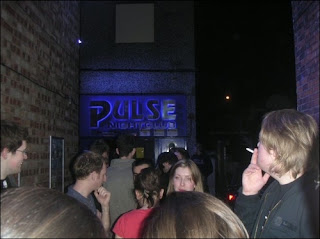 After that we hit the dancefloors and the gin and tonics for me. I got a bit drunk, Eric pulled and soon I was carrying Sandra in a piggyback race up the hill back to our digs. Unfortunately I had a nasty fall, ripped my trousers and wrecked my nose. I got the blood off, had a shower and headed to bed, not before I had paraded in my underwear and shown my bum to the gorgeous Rachael Ward. It was over in a flash and it was back to Bournemouth via London, where I met John and Jody for a belated birthday drink with them in a pub near Oxford Circus. I’ll remember that, as its where I heard that Bournemouth had beaten Wrexham 2-1 away. At that stage we were on our way to the play-off final… 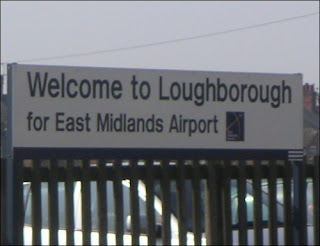