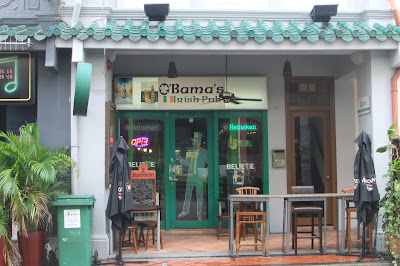 So having been reunited with cousin Chris in May 2011 when I arrived in Singapore (for the second time), we had originally planned to go out for a few jars in the city. However my flight was getting in late afternoon so we gave the pub a miss and had a barbecue instead. I mentioned to Chris that I had never had a pint of Guinness in Singapore or even seen an Irish Pub. Though I knew there must have been one somewhere. Best of all Chris tells me there is one called O’Bamas!! Hilarious! 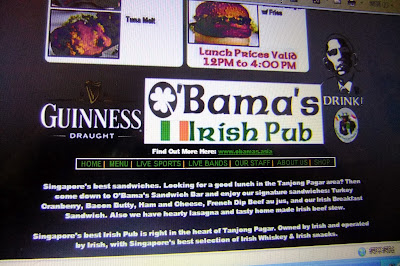 So I googled it and found there website and had an 8 hour layover in Singapore the following week on route back to Australia, so I decided to visit China Town and grab a pint in O’Bamas. 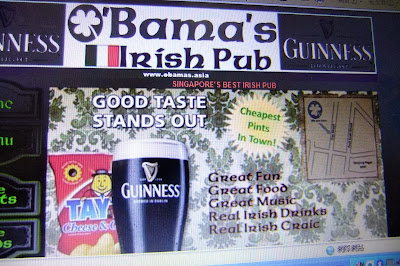 Obviously the pub itself is just a gimmick and would no way have been endorsed or even visited by Barck Obama. It was just the whole funny element of it all. About 2 years earlier I had been working on the cross channel ferries with a lady named Zoe White. Much to my surprise and that of co worker Chris Bilsland, Zoe had NEVER heard of Barack Obama! Despite the fact that he clearly was the most famous man on the planet at the time, well what US President wouldn’t be?! 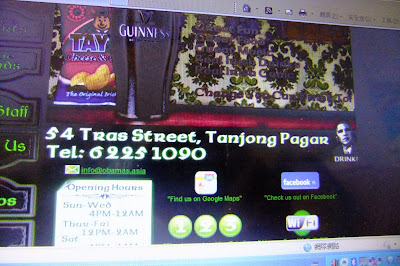 I found out that O’bama’s was located on 54 Tras Street in Tanjong Pagar. So the plan was to get out at the airport (Changi International) and use the metro system. Anyone who has used the metro/train link system in Singapore will know how easy and efficient it is. 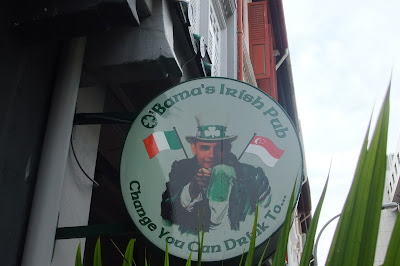 I alighted at Tanjong Pagar station and found O’bama’s Irish Pub almost immediately. On a quiet street, it stood out. The sign above the door featured the President himself flying an Irish Tricolour flag and a Singapore flag, whilst holding a pint of the green stuff (you know that beer drunk by leprachauns, but only in Ireland). In keeping with the President’s speeches, the slogan read “Change you can drink to…” (a take on Obama’s quote “Change you can believe in…”). 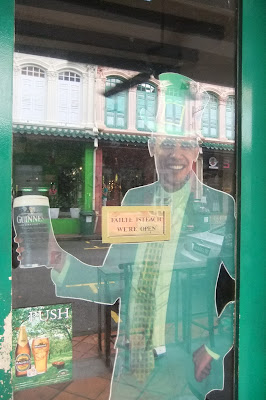 Wearing a green shirt, tie and suit, a very welcoming Barrack Obama holding a Guinness stands at the door. He welcomes you into his pub, in cardboard style. 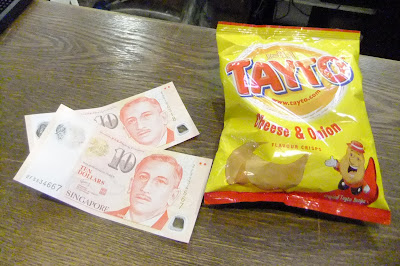 While I waited on my first Guinness in Singapore, I feasted my eyes on the advert for Tayto Crisps! The Northern Irish ones. I hadn’t been back to Northern Ireland for almost two years and these Cheese and Onion crisps are hard to come by. So I had to buy a packet, even at the dear rate of 4 Singapore Dollars per packet… 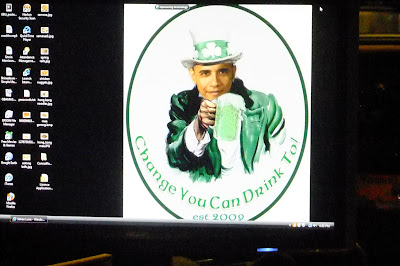 The advert for Obama’s Irish Pub on the computer inside, in fact it only opened in 2009, so it’s possible that it wasn’t even around on my first trip to Singapore in October of that year (with Natalja). 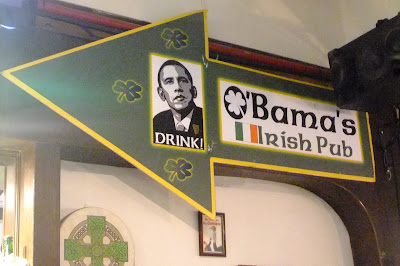 An arrow directs you to the bar, the word “Drink!” in Irish Father Ted style being inscribed below an image of President Obama. 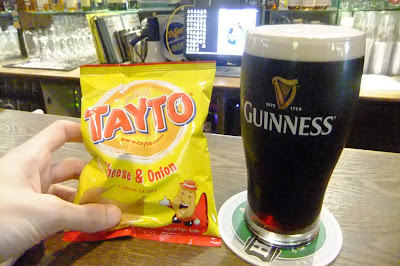 Honestly – life’s best combination!! A packet of Tayto Cheese and Onion crisps from Tandragee in Northern Ireland and a fresh pint of Guinness from St. James’s Gate from Dublin in the Republic of Ireland. If I didn’t have a connecting flight and a limited amount of Singapore Dollars left, I’d have stayed there all day! 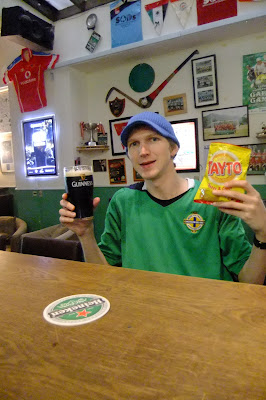 And me relaxing on my own in O’Bama’s Irish Pub in Singapore. With Tayto and Guinness. 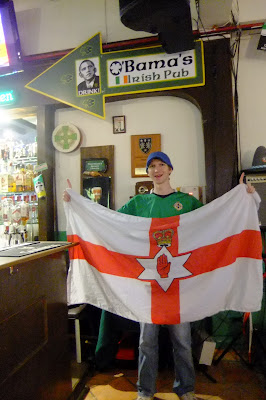 Most Irish Pubs tend to favour the southern Irish culture, flags and traditions. I was there as ever to even things up. Northern Ireland is on the island too and should be more represented in Irish Pubs! There’s even a Celtic cross above my right hand, almost the same as the Northern Irish football team emblem. 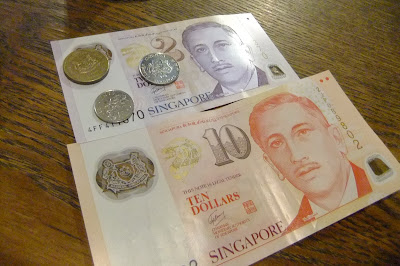 The last of the big spenders in Singapore. Things aren’t cheap in Asia’s poshest country. 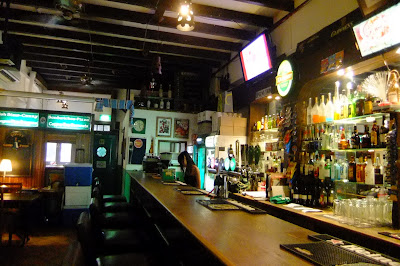 The bar itself, including the pretty barmaid Seeha Luuna. Herself a Singaporean. A tidy friendly wee bar. 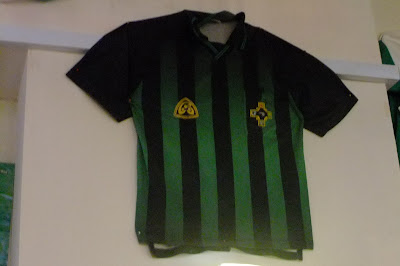 A green and black gaelic style shirt which could easily have been a Northern Ireland shirt with a difference. 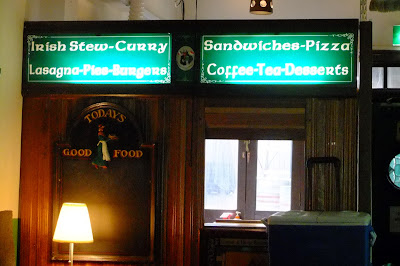 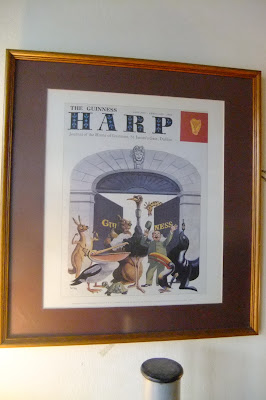 An advert for my one time favourite Lager and a drug I’ve missed – Harp! 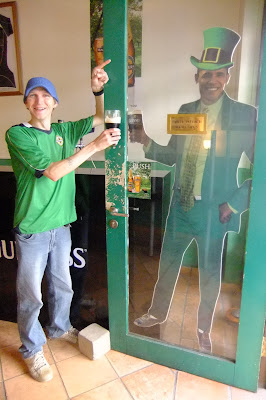 Saying “cheers” or “slainte” with the man Barrack Obama himself. He’s wearing a green hat in Irish style and I have my famous blue hat on. 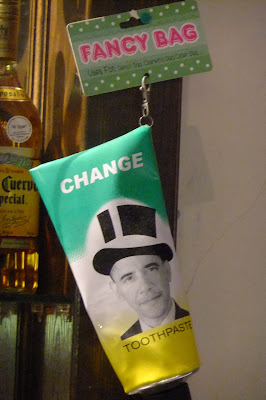 The famous Barrack Obama style toothpaste, usually sold in Asia and branded as Darlie. The similarity is uncanny! 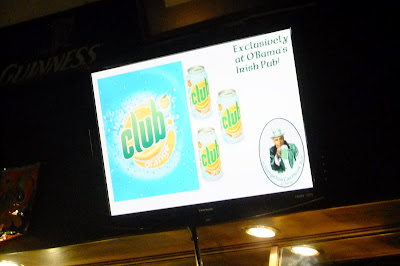 “Exclusively” on sale here is also Club Orange – a Belfast fizzy drink which I ain’t sampled for years. Still haven’t. 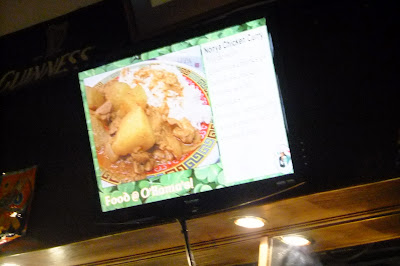 Asia mixing with the Irish. A curry with potatoes! 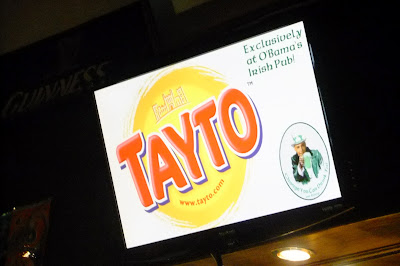 A Tayto advert. The Northern Irish Tayto that is! 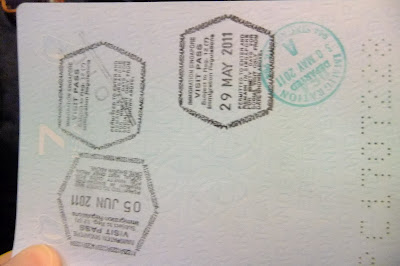 Living in Asia and Australia you seem to pick up hundreds of small passport stamps. I have passed through Singapore now on four occasions (and had a fifth flight to it cancelled). Three of those times, I have actually been to the city (rather than just Changi Airport/Woodlands Train Checkpoint). Strangely though my first time in Singapore was done entirely by train in 2009 (entered from Malaysia and left to go into Malaysia). 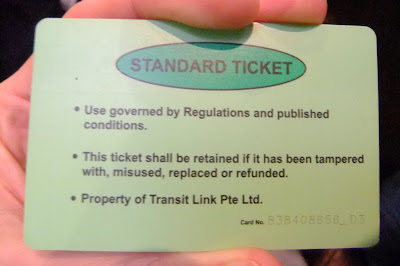 I’ve posted this before I’m sure, but these are the plastic card tickets you get when using the Singapore train system. If you put it back in you get a refund of your deposit. In 2009 and in 2011 the colour of these cards were green both times. 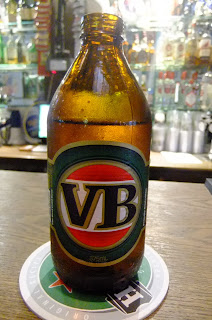 As the heat bate in from outside I decided to have an Australian bottle of VB to use up those final Singapore dollars before heading back to the airport. 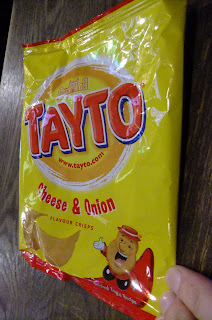 My Tayto Cheese and Onion. 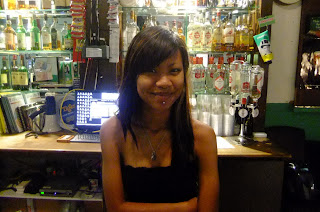 The barmaid, Seeha Luuna. I had previously met two Singaporeans before in life – I worked with Mya Than Da in Bournemouth in 2008 – 2009 and I met Kelly the receptionist from City Backpackers while staying there in 2009. Singaporeans are a friendly, intelligent bunch of people. They often speak 3 or more languages (Singapore itself boasting 4 official languages – Malay, English, Putonghua and Tamil). My trip to O’bama’s and yet another stop over in Singapore was now over.
Pub – O’Bama’s Irish Pub
Address – 54 Tras Street, Tanjong Pagar, Singapore, SINGAPORE
Beers – Guinness, VB
Snack – Tayto Cheese and Onion
Nationalities Met – Singaporean
Key Song –
RANDOM IRISH DRINKING SONG:
My Videos  –
ME INSIDE O’BAMA’S IRISH PUB IN TANJONG PAGAR, SINGAPORE:
BARRACK OBAMA JOKES BY MYSELF AND CHRIS BILSLAND ON BOARD THE CONDOR VITESSE – ENGLAND TO FRANCE, 2009:
ASKING CUSTOMERS IF THEY KNOW WHO BARRACK OBAMA IS, AT BEST BREAK, BOURNEMOUTH, ENGLAND 2009:
BARRACK OBAMA TOOTHPASTE PILLOWS IN SHINYING, TAIWAN, OCTOBER 2009:
BARRACK OBAMA VIDEOS:
VICTORY SPEECH:
INAUGURAL ADDRESS, 20 JANUARY 2009:
DRINKING A GUINNESS on ST. PATRICK’S DAY 2012: