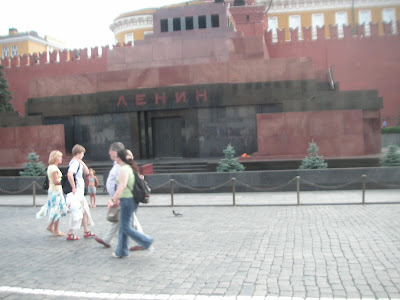 Backpacking in Russia: Stranger in Moscow and the 1917 Revolutions

One of the few things I remember from a school history lesson on the former Union of Soviet Socialist Republics was the Bolshevik revolution of 1917. The whole USSR/Russia/Soviet always held an interest in me. It was a massive country (the USSR/CCCP) which endured the horrors of Stalin and carried someone’s communist dream into the 1990s, no matter how ineffective it was in pumping to maximise the counntry’s economy….Well I chose the capital to visit (as tourists do, I’m predictably unpredictable). I thought I’d see Moscow first. The history and culture is steeped throughout the current Russian Federation (and products of the USSR such as Estonia and Latvia), however here I was in true Michael Jackson style – a stranger in Moscow. 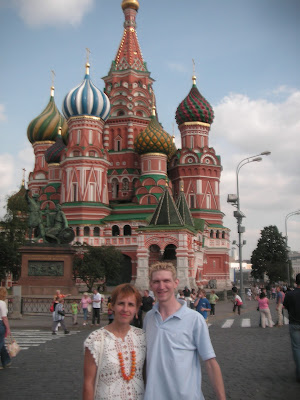 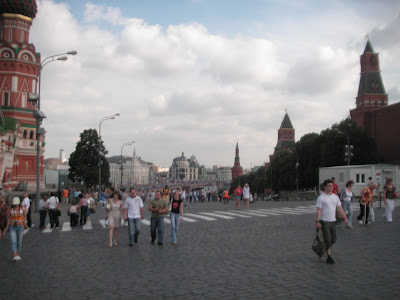 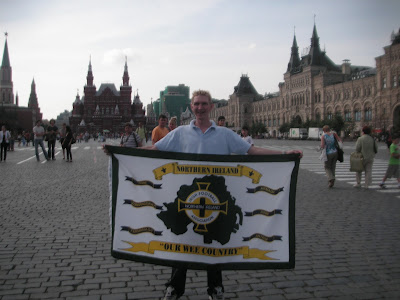 The first thing that hit me was the lack of English speakers. Learning Priviet, Ma Nya Zavut Jonny, Spasiba and Pajalista were a must and did help me out, though I still couldnt read that bizarre alphabet. I’m just a western european questioning a backward R. That was a real culture test and something I really enjoyed, for once I was envisaging a country full of self pride, war wounds, unhidden history and quiet, reserved people. The Russians I met were all quiet and reserved. No shouting, disco dancing or jumping up and down for no reason. Their self discipline is uncanny. Something you wouldnt see on Belfast’s Shankill Road as the discipline is reserved for times of trouble and commitment – the 12th July for one (and for the reason that us Northern Irish enjoy ourselves when we need to, away from any horrors of war and sectarianism). 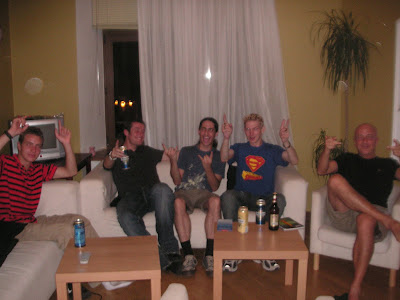 You cannot trust the police in Russia. They stand on every street corner eyeing up and looking for foreigners and they may question you and ask to see your passport (I carried only my photocopy while walking the town). Four New Zealanders in my hostel (Hostel Moscow) were less than lucky. They had their passports taken and they had to pay a fine to get them back. So due to the expense of beer, I partied Russia mainly in the hostel with the crew there, but also took in a few carryout beers in the local park (Gogolevsky Boulevard) and a few bars in Arbat Street. 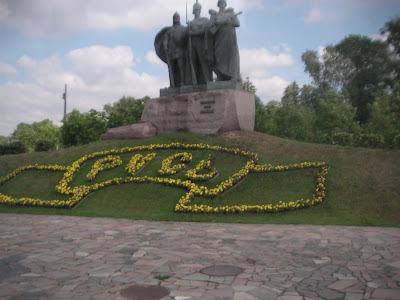 I got a guided bus tour of the city, which was unbelievably held in English and cost just under £18 and was worth it. I got the full story of Stalin’s Seven Towers, the burning of the churches, the fact that the city is female (St. Petersburg/Leningrad being male) and also that the name Moscow was simply taken from the river which was named first (The River Moscow, hey). I saw The Cathedral of Intercession (a must – it looks like a sweet factory), Red Square, The Kremlin, The Bolshoi Theatre and Lenin’s Mausoleum (conveniently located in Red Square, which is neither Red nor a Square). I hung out with Andreas and Gabriel, two East Germans who spoke good English, we also ate together and enjoyed the atmosphere on Arbat Street. 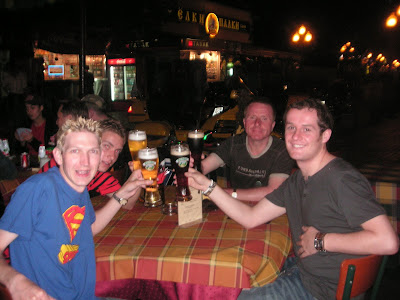 The most upsetting thing for me was not getting to see Lenin himself (Vladimir Ulianov). As most will know, Lenin died in 1924 after winning the revolution in October (or November) 1917 and spearheading the USSR. Lenin’s body has been preserved in Red Square in a beautiful, obvious Red and Black building, which says ‘LENIN’ in Russian on it. Lenin’s Mausoleum is open from 10 am – 1 pm five days a week only. I was in Russia for a total of four days, so naturally I’d be able to queue and see Lenin… However, on the first day, I arrived in the afternoon and therefore missed the opening. The next two days happenned to be the two days it was closed and the last day I was in a rush to make my flight and didn’t want to risk it. So if I ever return to Moscow, I will make sure I am there to actually see Lenin in the flesh in the restored version in his red and black Mausoleum. 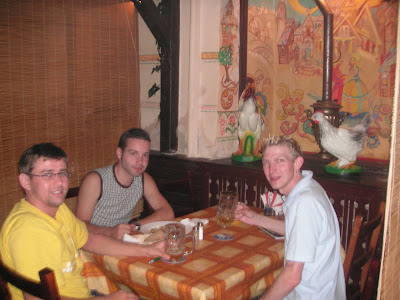 I enjoyed Arbat Street and the evening entertainment on show there. Great fun and a lot to see and do. Some nice bars and restaurants, but if you turn off the main street, the food is SO much cheaper. Do it! Try some Hopckoe! Russian beer is great and I also, obviously sampled the Vodka, including a Watermelon Vodka session in the hostel with the Dutch and New Zealand crowd. What was also hilarious was doing shopping, they make you lock your bag up while you shop and then collect it on the way out. Oh and the metro has to be seen. The stations are a free art museum… 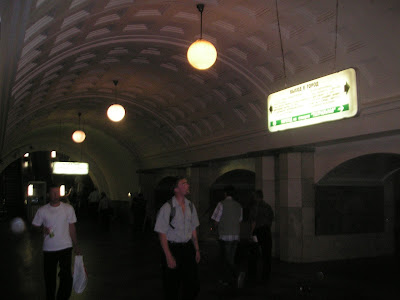 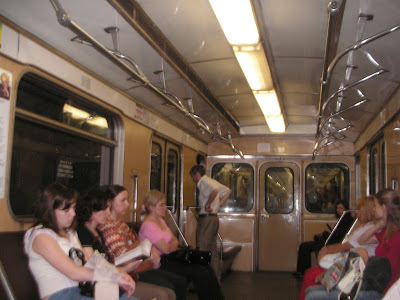 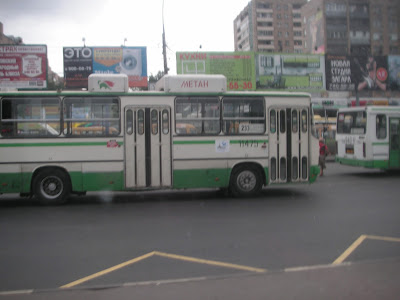 On the way out of Moscow that day in late July, I attempted to speak some Russian to bus drivers and somehow made it to the Aeroport Terminal 2 at Sheremetyevo. Bizzarely at the Airport I found an Irish Bar selling my favourite lager, HARP. It really was hard to believe for me. 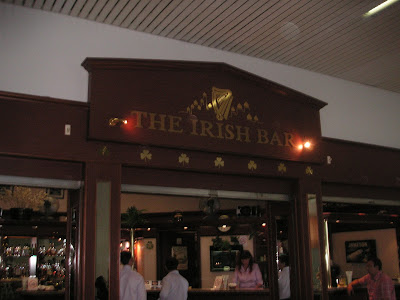 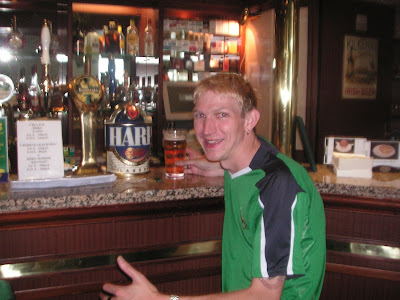 I waited in there, spoke to the Irish member of staff and enjoyed a conversation with a very enthusiastic Russian football fan, who spoke very good and was with his Dad. His name was Ivan. I enjoyed that final pint of Harp in Russia and headed back to Europe for the first time since June, I was off to Minsk for another exciting journey! 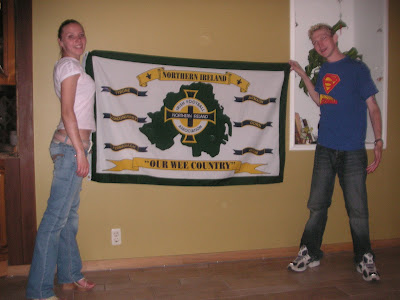 I made a few good friends in The Russian Federation, including Irish musician Shane Sweeney and a beautiful, intelligent Russian princess called Tanja. Life is beautiful around the world. Just for good measure, I chimed Boney M’s Rasputin on my iPod on my final bus journey to Sheremtjevo. How ghastly the essence of communism filters ignorantly through our British eyes. Read more books. 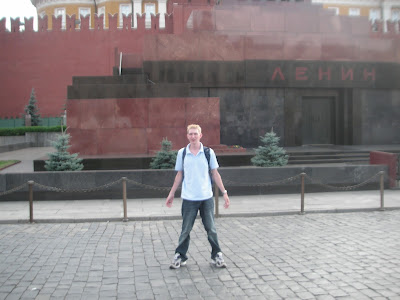 A VIDEO I MADE IN ARBAT STREET:

Bars Visited – Arbat Street Restaurant, Arbat Street Pub, The Irish Bar (Sheremetjevo Airport)
Beers Tried – BaltiKa, HebcKoe Blue, HebcKoe Gold, Ayinger, boYKA beer, 3OnoTAR – 60YKA, Harp.
Nationalities Met – Russian, (East) German, English, Australian, New Zealanders, Dutch, Republic of Irish, Belarussian, Kazakstanian.
Transport Used – Bus, Coach, Metro (amazing), Taxi, Aeroplane.
Strange Currencies – Russian Roubles.
Where I Stayed – Moscow Hostel near the Kremlin walls and Gogolevsky Boulevard on the corner of Afanafjevsky Street. Recommended, they have a jacuzzi, free internet and some lovely staff.
Favourite Food – Russian chips (half are cooked, half are not).
Favourite Drink – Energy Drink – Red Bull Equivalent (but in Russian and not called Red Bull). This energy I get from anywhere.
Favourite Thing About Moscow – The obviously beautiful buildings and sense of national togetherness.
Moving Moment – Trying to find my way back to the airport, almost getting the wrong Metro, then Bus, then Terminal. For once, my prayers and my dreams of happiness led me safely to Sheremetjevo Airport.
Average Price of a Pint – £3.30. Moscow is rumoured to be the most expensive city in world. Don’t believe that for a second, I’ve been to Stockholm, Reykjavik, London and New York. Try them for size.
Key Song – Michael Jackson – Stranger In Moscow/Boney M – Rasputin (DOUBLE A-SIDE)

2 thoughts on “Backpacking in Russia: Stranger in Moscow and the 1917 Revolutions”