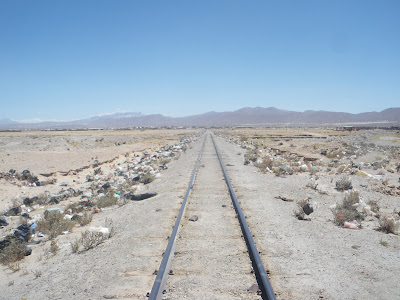 After leaving the dusty city of Uyuni behind, we were off on our adventure. There was no set itinerary so this really added to the surprises ahead. The first of which saw us arrive at one of the world’s most remote train lines…and an un-used one at that…standing on the track there was no chance of being run over by the 11.23 from Santiago. 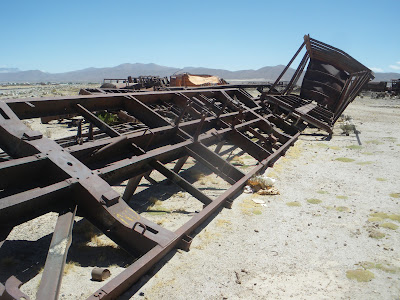 Known as Cementario Des Trens/ Trains Graveyard, this is basically an area next to the train line, once used as a link from Uyuni to the Pacific Ocean for trade of goods and exports. The area is the start of a desert wilderness in South Western Bolivia. 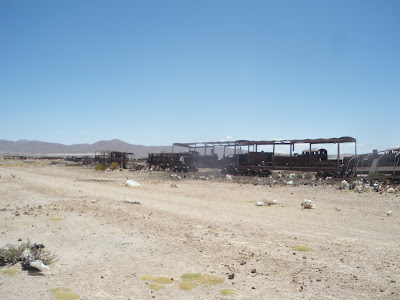 Transport to get there was by our 4 x 4 wheel drive Jeep, driven by Christian our guide. There were 6 of us travellers on the trip. We arrived at this train graveyard and were allowed to walk around and see exactly what it is. 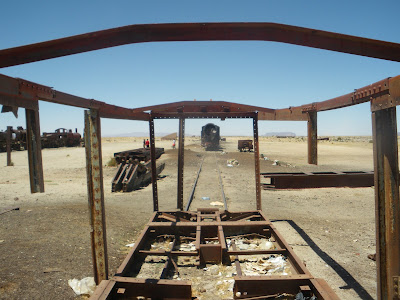 Nothing is sealed off or out of bounds – you are free to walk into, onto, under and everywhere you want. I climbed on the trains. They have been left there deliberately as a work of art. That, it is. 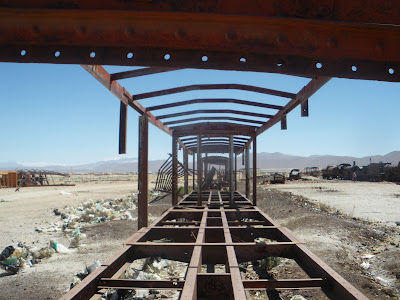 A train which lost its sides, but still has it’s main body. 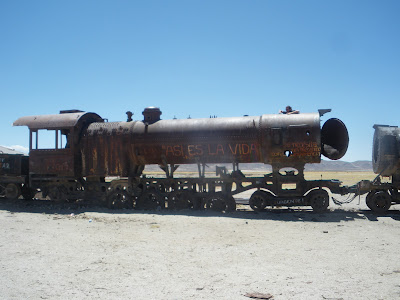 What Thomas The Tank would look like if he was left to rot for a few decades! 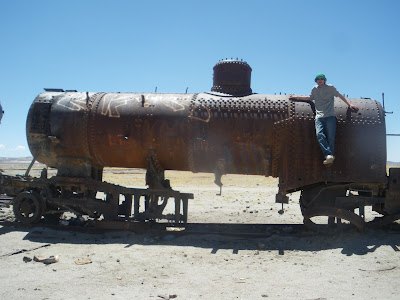 It was a hot day – climbing on the train. 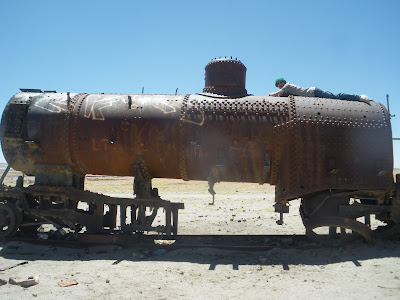 Lying on a train. 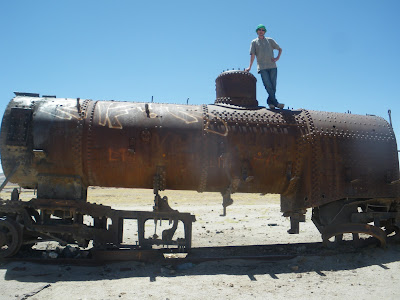 Standing on a train. 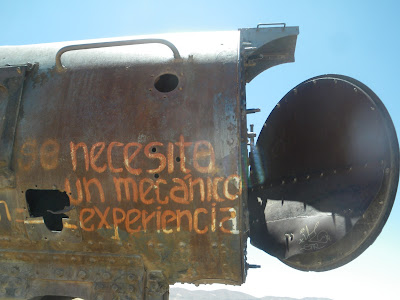 The Spanish reads something like “there is a need for mechanical experience”. 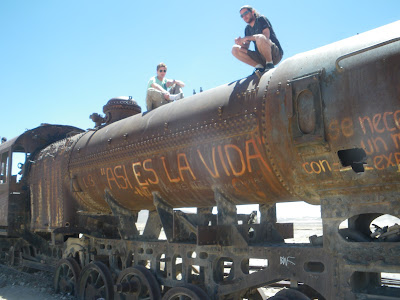 The two French lads who became good buddies in Bolivia – Benoit and Guillaume. 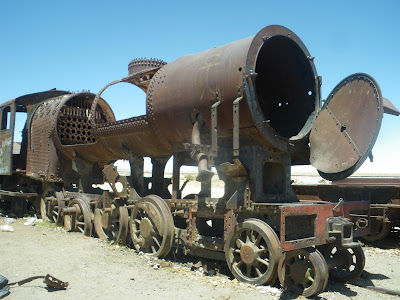 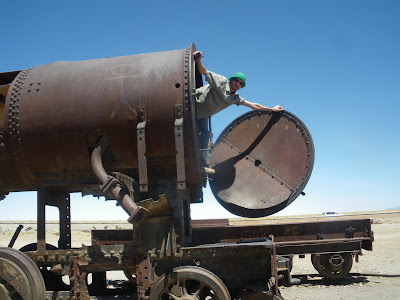 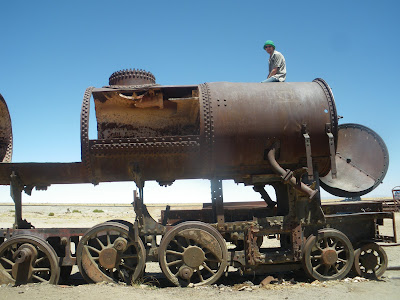 Did a James Bond style run on the roof as well. 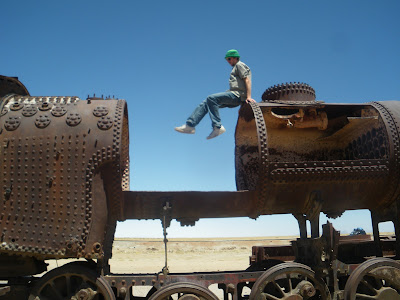 I did the jump between the two parts but not captured on photo – here just jumping down. 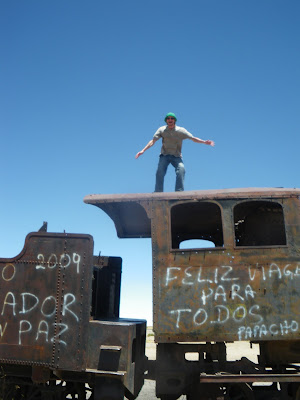 After my James Bond run… 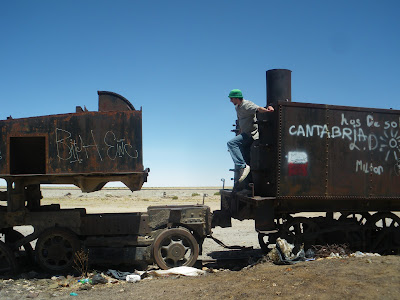 It was a pretty new experience all of this – a lot more random and peculiar than it looks. You can have a lot of fun there! 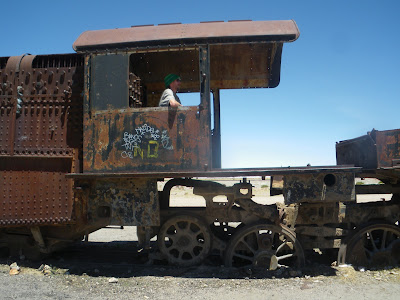 Relaxing on a train going nowhere on the edge of Uyuni, Bolivia! 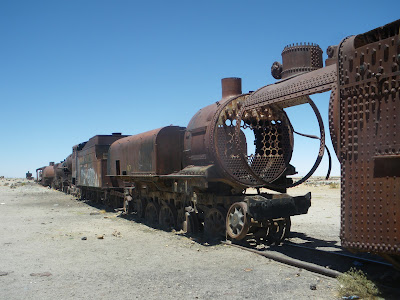 The trains graveyard is actually quite long – it’s just been left to decay, rot and erode naturally. I quite liked that. Can’t be too many places like it on the planet. 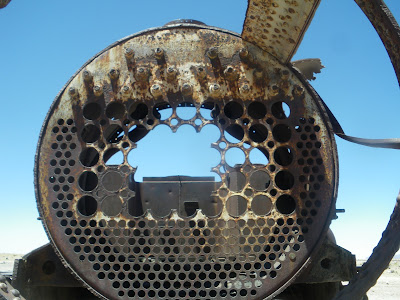 No idea what part of a train this was – but definitely artistic! 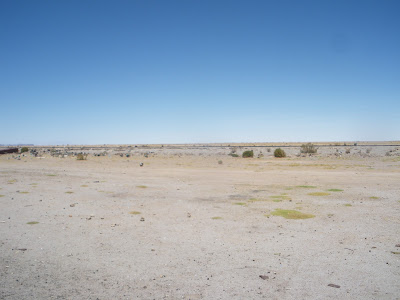 The wilderness that lies beyond… 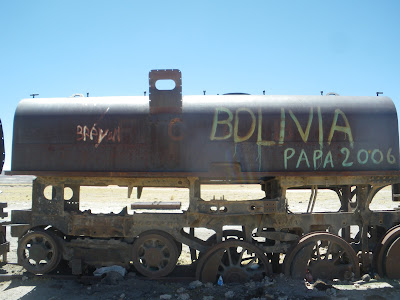 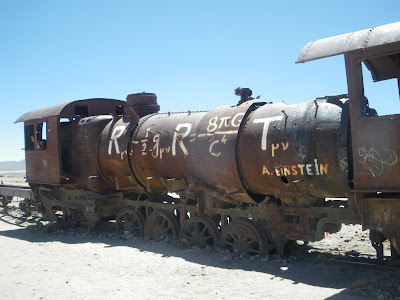 Random graffiti included some kind of Einstein tribute, love the way the train is sunk into the ground. 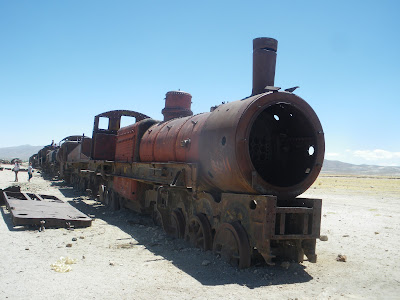 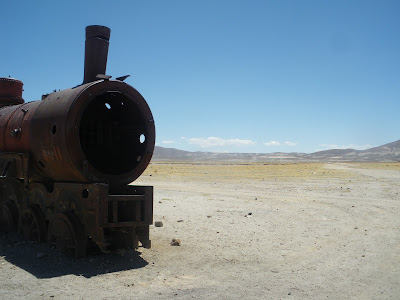 The train that was in fact going nowhere, as Noel Gallagher once said… 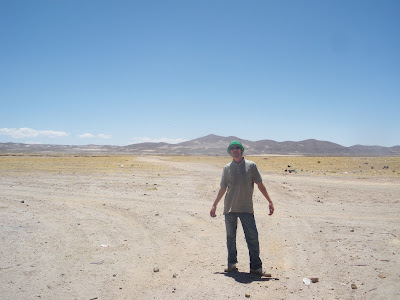 The heat of this Bolivian Desert wilderness at Cementario Des Trens. 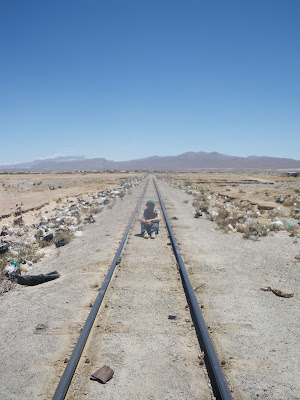 Of course I might as well sit on the train track. 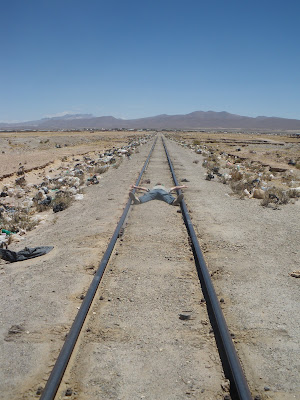 Lying on the track loving the travel lifestyle. This was the final photo at Cementario Des Trens before we headed out to the remote village of Colchani – a salt extracting community.
What Is It? – Trains Graveyard, near Uyuni, Bolivia
Population – Zero People, A Few Dead Trains
Transport Used – 4 x 4 Jeep
Key Song:
SOUL ASYLUM – RUNAWAY TRAIN:
My Videos:
CEMENTARIO DES TRENS:
Join 15,017 Monthly Readers! If you enjoyed this article and LOVE travel and SAVING money, get e-mail updates from Don’t Stop Living – a lifestyle of travel! (It’s Free) 😉 Jonny