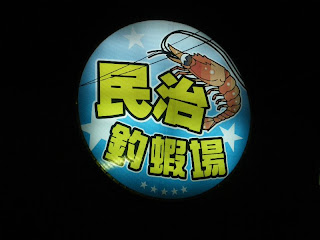 It was another random Friday night in Shinying and surely this one has to be one of the most enjoyable Friday nights of all time. We went Shrimp Fishing in Taiwan! Really! It was suggested to us on the Thursday night, whilst at the night market with two of Neil’s workmates – Binh and David. They said something like “did you know that you can go Shrimp Fishing any time you like, round the corner from here for 150 dollars?” I was initially sceptical as I’m not a great fan of seafood, but then was loving the idea in the build up to it, and especially when we were sat there, relaxing, with a beer, fishing for shrimps. 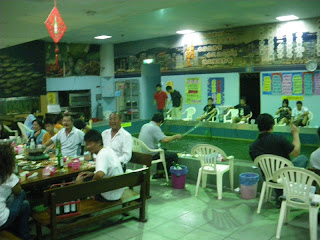 It’s a less than obvious building on a side street. You wouldn’t know there was shrimp fishing happening here unless you could read Chinese. Although I did neglect to see the large lit up sign with a picture of a shrimp on it, which was by the entrance. In we went, the only foreigners in town, with Eva our local lady. Once inside, we saw David and Binh on the other side of the small pool with their fishing rods, going for it. It was a cool air conditioned and tidy room, with a pool, lots of seats, a mini bar, the pay point, and the cooking area at the back. This is the sort of random Friday night that Neil and I love. I was so grateful to be invited to such an unusual hobby. 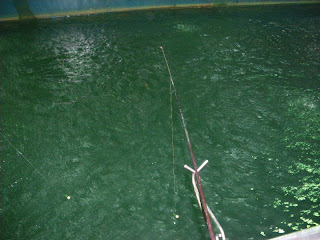 At the counter we paid 150 dollars each for the pleasure of shrimp fishing. There are no hidden costs or extras. If you catch 20 fish, you can cook and eat them there and then, or even take them away with you. This cost included a fishing rod (pick your own), a small bag of bait (wee fish), the seat where you want to sit, a net to put the ones you catch, and as much time as you want sitting by the pool trying to catch shrimps. Whether you catch one or 31 its the same price. And after that you put them on a skewer and grill them yourself before eating them! What a change from Boring old England… 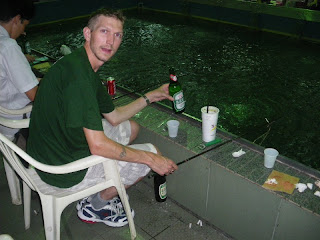 Neil and I also had a Taiwan Beer in there, this alone cost 100 dollars, almost the same price as unlimited shrimp fishing. My goal at the start of the night was simple – I just wanted to catch at least one shrimp that was all. When we arrived at the seats next to David and Binh, they had already caught 2 shrimps. Binh was doing well and caught another one while I was getting my bait ready. Basically there are two hooks, and you can attach as little or as much fish bait to each hook as you want. The problem is, if you put 6 on there, the shrimp may be able to eat the bait without getting caught on the hook. I put two fish bait on each hook and using the holder put my rod into the water near the others. 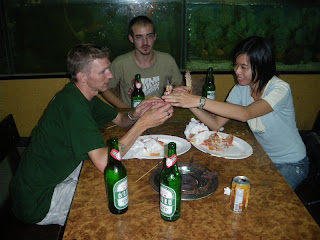 As Neil and I sipped on beer we realised this was some kind of random night that would be remembered. I knew it was special. I had never been fishing before, of any description and here we were fishing for Shrimps in the city of Shinying! Looking into the murky green water you could see the shrimps. The owner of the centre obviously fill the water up with shrimps to ensure we catch them. Where there were bubbles there were shrimps basically and we moved our rods accordingly. 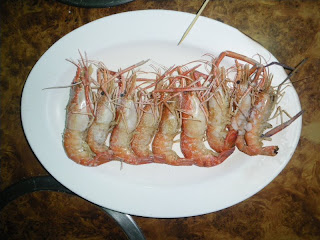 Eva was there but was just watching and taking the photos. She seemed happy to do that. It was exciting stuff. When one of our rods bent down towards the water, you knew a shrimp was chewing the bait and it was a case of choosing the right moment to pull your rod up, hoping the shrimp wouldn’t fall off. Hoping the shrimp was caught, Hoping the shrimp would make it into the fish net, which already contained quite a few shrimps. Ugly white and pink creatures these. I certainly had never seen or eaten one before. Soon I’d be doing both. 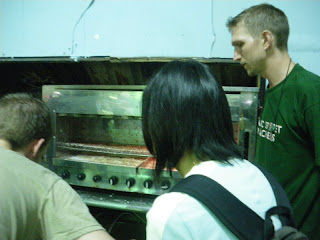 I heard a yank from Neil and he had caught his first shrimp! He pulled it out and the trick is to squeeze the shrimp and stop it from moving. It will put up a fight when you first ctach it. Then you need to pull the hook out of its mouth. Just after this I realised my bait had gone, a shrimp had eaten it but not been caught on my rod. It was just my dream to catch even one, and I was confident I could, especially when Binh was catching them for fun. She caught a total of 5 the whole night. 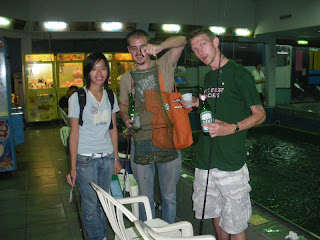 Then a shrimp was tugging on the bait and I pulled it up, but felt the shrimp get away. It was exciting stuff. A bit of skill and luck is needed. Soon though a shrimp was tugging again on my rod and I slowly pulled it up to see a large pinky orangey white ugly sea creature on the end of my rod. I pulled it in and was very happy to have caught one. The job wasn’t done yet though. I then had to hold the shrimp and remove the hook. It proved tricky to hold the shrimp, it was fighting with its pincers and I dropped it on the ground, though it was still attached to the hook. I had no problem pulling the hook out of its mouth – it came straight away with a short tug. Then I held on without dropping the slippy shrimp and placed it in the net. On that note I retired! Ihad done what I wanted – CAUGHT A SHRIMP! 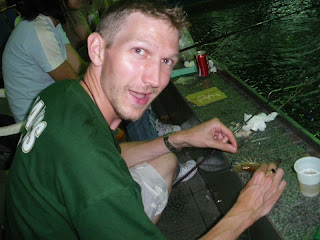 In total by the end we had 10 shrimps between 5 of us, but David had to shoot off home to his wife, so the 4 of us could share and cook the shrimps. Neil caught 2, David caught 2, Binh caught 5 and I was happy I had caught one. The shrimps were all still alive in the net, they survive a wee bit out of water. Then we placed them in a pot of jelly which kills them sadly. After this we got some silver strong skewers and put two of them through each shrimp ready to barbecue/grill them. A Taiwanese guy showed us how to do this, helped us and gave us an extra large extra shrimp for free for doing this. 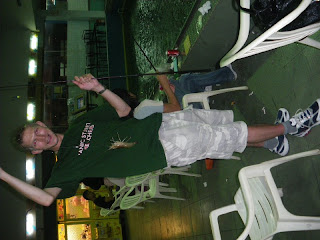 You just place them uder the grill and cook them on both sides. After 20 minutes or so (maybe earlier) they were looking crispy and ready. We took it in turns to remove the shell and go straight for the large bit of white meat in the middle. Neil felt it tasted like chicken. I felt they just tasted like generic saly seafood. That was the only ingredient to the killed shrimps – salt. Soon our shrimp fishing night was over, and what a random enjoyable way to spend a Friday evening! I’d recommend it.

Where? – Random side street in Shinying, near to Shane English School

Cost – 150 Taiwanese Dollars all in! – Three British Pounds
(This cost includes your fishing rod, your bait, a seat, a net, as much shrimp fishing as you want, the skewers, the cooking, the plates. Everything except your drink!)

WHEN I CAUGHT MY SHRIMP IN SHINYING:

SKEWERING AND PRE COOKING OF SHRIMPS:

3 thoughts on “Backpacking in Taiwan: Shrimp Fishing in Xinying”