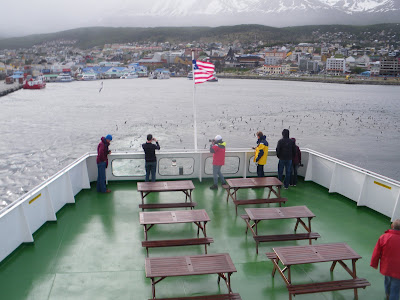 My Trip to Antarctica Begins: Sailing Down The Beagle Channel 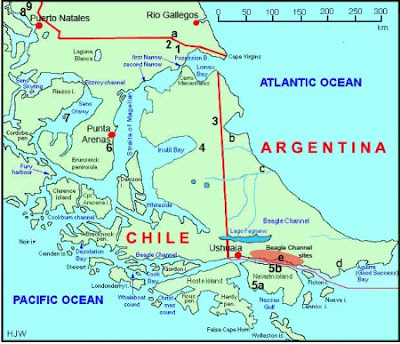 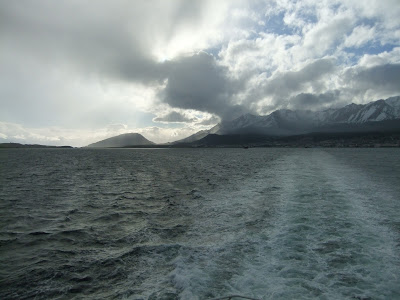 The first part of the epic quest to Antarctica began with a sailing and departure from the port of Ushuaia, in Argentina. Ushuaia is situated on the island region of Tierra Del Fuego, which is shared partly by Argentina and partly by Chile. A rather peculiar region, something I cannot think of similar examples of in that regard. Though I did draw a similarity with Ireland – an island also shared by 2 countries, one of which I’m from. 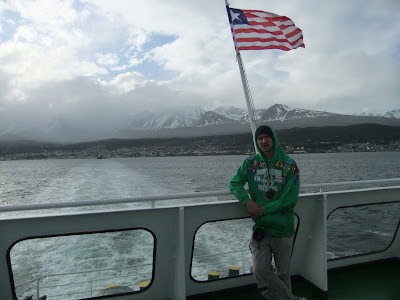 On a brisk, chilly cold Saturday night our ship, the MS Expedition, set sail on a journey which saw us leave behind the civilised world. Quite an astounding feeling really and something which doesn’t really hit you until you’ve finally gone to the end of The Beagle Channel and are on The Drake Passage. 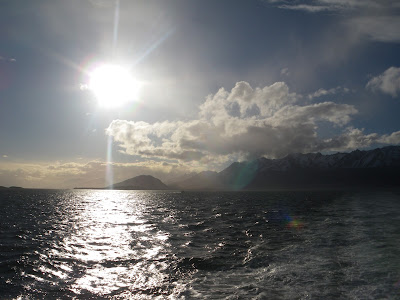 So for a period of 13 days I was part of this expedition group which saw us arrive on the continent of Antarctica. 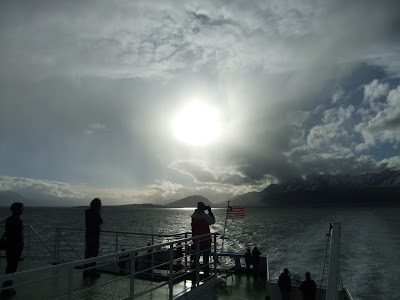 The Beagle Channel is wide and calm. To one side, Chile, to the other side Argentina. Simultaneously sailing on waters of both countries was a relaxing feeling. 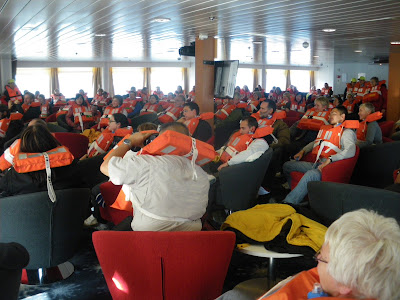 We bonded on the boat as a group, eating dinner, doing some drills, listening to introductory speeches and making new friends. Some of those “new friends” would play a bigger part and make a much larger impact later on. We didn’t know it then. 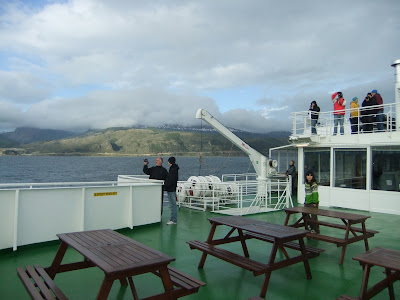 In fact it was on the waters of The Beagle Channel where I first caught sight of the Hong Kong traveller Yu Pan Yu. Cold, lonely and wearing an over sized green jumper, she appears on a few of my photos from our sailing down the Beagle Channel. You may spot her in that photo. 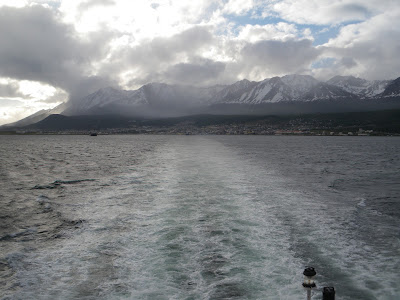 So as we sailed away from Argentina and planet earth as we know it, it was time to relax, party, and enjoy the freedom of the real land down under – Antarctica our next stop. 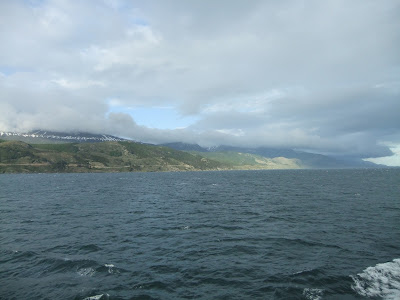 A few photo memories from the trip DOWN The Beagle Channel, on route to Antarctica. 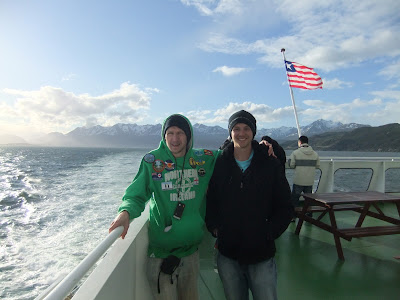 Making new friends, here with Chris from Coffs Harbour (later met up with Chris in Uruguay). 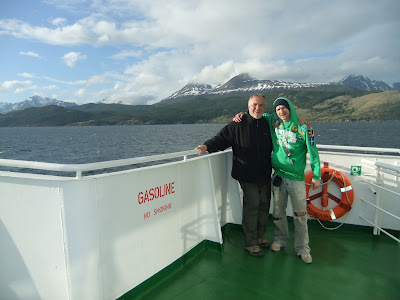 With Mike from Newcastle, England. 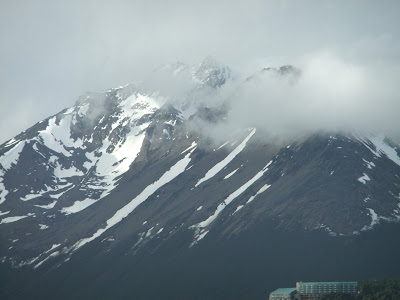 The gorgeous mountains on the Argentine side of Tierra Del Fuego. 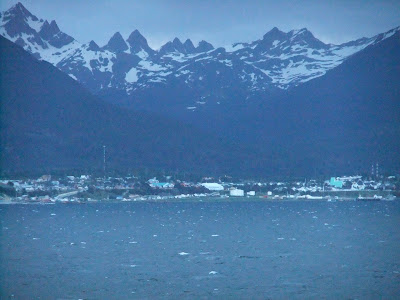 And the southern most known village/town on the planet. It was emotional passing by Port Williams in Chile…it truly is the end of civilastion there. 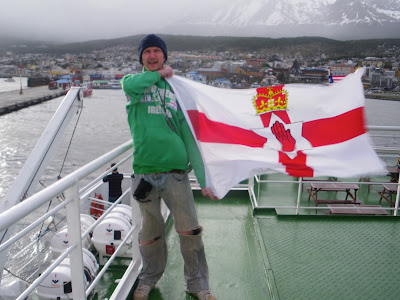 Flying my Northern Ireland flag on the Beagle Channel. 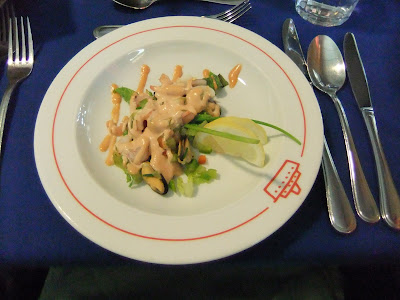 We had time to eat on the sailing down The Beagle Channel – I think it took about 2 hours. Starter on board – chilled Antarctic prawns of course. 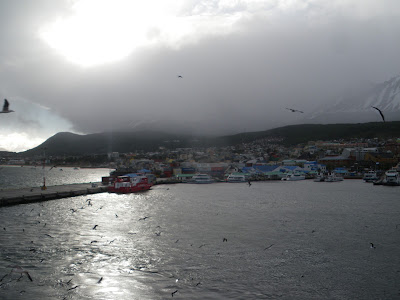 Birds followed our boat along the Beagle Channel from our departure from the port of Ushuaia in Argentina. In an almost Coldplay video style moment, as I watching the birds, I thought to myself “birds go flying at the speed of sound to show you how it all began.” 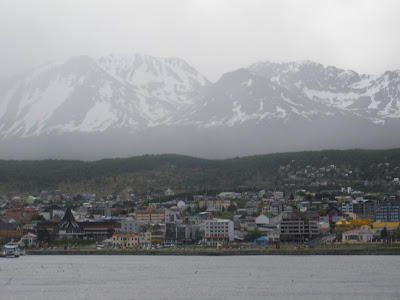 Ushuaia, the world’s southernmost CITY, taken from our boat. 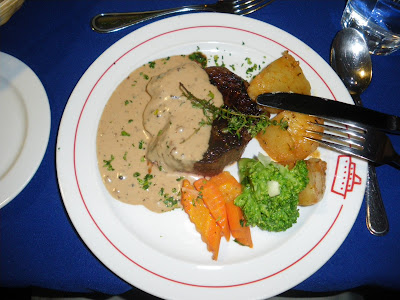 Steak and pepper sauce on board for dinner. I live like a King sometimes…
City We Left – Ushuaia, Argentina
Settlements We Saw – Ushuaia, Argentina and Puerto Williams, Chile
Length – 240 kilometres
Nationalities Met (on Beagle Channel only) – Australian, English, Brazilian, Italian, Canadian, US, Israeli
Key Song –
COLDPLAY – SPEED OF SOUND:
My own videos –
SAILING DOWN THE BEAGLE CHANNEL AWAY FROM USHUAIA:
SAILING BACK UP THE BEAGLE CHANNEL TOWARDS USHUAIA:
Join 15,017 Monthly Readers! If you enjoyed this article and LOVE travel and SAVING money, get e-mail updates from Don’t Stop Living – a lifestyle of travel! (It’s Free) 😉 Jonny

2 thoughts on “My Trip to Antarctica Begins: Sailing Down The Beagle Channel”