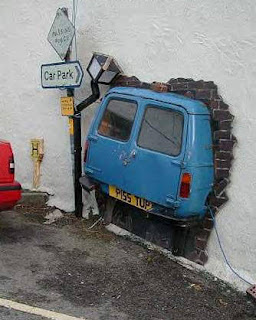 This is the scariest blog post to date, and looking back at this event scared the living shit out of me. I guess most of us will have known someone or have been in a car accident at some point in their lives. For me, I was just 19, in the car alone, driving to work, and could have died. I am so thankful that I survived unscathed, though the car was a total write off and this moment from my past is something I’d normally want to forget. So this post will be short and not dwelled on. I like to write about everything and anything, so here’s the story…the day I almost died in a car crash.

It was Thursday 17th November 1999, and I worked every day from 6 am until 3 pm as a stock control assistant in the new Tesco store at Tesco Knocknagoney, on the edge of Tillysburn in East Belfast. I had my own car, which I still owed some money to my parents for. It was an original Hyundai Accent, year 1998 I think. It was a great car actually. I was 19 and drove to work, it was only a 25 minute drive from my parent’s house at Bangor to my work. I was rarely late, and was normally OK at getting up so early, in fact I got rather used to those shifts. On this particular morning I was also a bit tired and running a wee bit late. At that time of the morning there was barely any traffic on the Bangor – Belfast road and I rather enjoyed my short drive into work. However I don’t recall the full extent as to what happened (and thank God it was 10 years ago…) but it was a mixture of two things, one of which would scare the shit out of any driver. 1. I was driving too fast and 2. I fell asleep at the wheel. In honesty if I was going too fast then I would have more than likely died, or been very badly injured. I had passed through Holywood around 5.43 am, with my music on as usual when suddenly I became aware that the car swerved from side to side. Luckily no cars were coming the other way, as the car ventured out of control doing a complete spin in the middle of the road, and as I tried in vain to control it, the car suddenly went into reverse and rammed me into a wall near the war memorial in Holywood. I have never been so scared in my entire life. Surely I cheated death, as the car had spun round so that it was actually turned the wrong way, meaning the side where I was sat, the drivers side was right into the wall. The stereo stopped, the engine wouldn’t start, the keys were jammed the door was smashed in as were all the windows on my side. I don’t recall the rest, perhaps I was in total shock. I climbed out somehow towards the passenger side, which wasn’t blocking the main road. It was still dark, and by chance my old work colleague Kyle McKinley pulled up, recognising me and my car. He asked if I was OK and accompanied me to the nearby phone box where I must have phoned my Mum and hoped she would answer so early, which she did. “I’ve been in a terrible accident” I said, before Kyle headed into work, alerting my managers of what had happened. In the meantime the police arrived, asking if the car was mine, if I was OK and if any other cars were involved. No other cars were involved. I had cheated death, I could have died that day. The car was a total write off. My body was fine. It’s incredible. Of course my parents finally came and sorted out all the issues for me, such as insurance, money, getting a lift home and police issues. For that I am eternally grateful. I went back and straight to bed, where the shock hadn’t sank in. I later woke up for a job interview that day, which I got (a transfer really, as I moved to a similar role in the Tesco at Springhill, Bangor). Strangely I went back to work two days later, unscathed and scared, and aged 19 it was a horrible feeling. Since that day I have been much more careful on the road, I never drive fast, I stop for a break if I’m tired and I value my life and my healthy body so much. I have driven past the spot where my crash was over 100 times and the memory has never left me. The year later, I bought a new car white Hyundai Accent 1.3 L (CKZ 7861), not phased by the crash, I didn’t blame the car at all. In fact I think it was just life’s warning to me as a 19 year old, and right now I live in Bournemouth, own the same car and am still shit scared of death. EVERY SINGLE DAY. It is a truly cherished existence we have here on planet earth. Don’t you dare fucking squander it. Live it up, live each moment like its the last. It could well be…