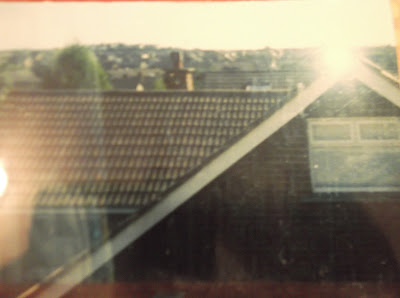 This post really takes me back and I am so glad I found these photos last month at my Mum and Dad’s house on a rare return to Northern Ireland. I found them in a box in the garage…above is the amazing view out of my bedroom window as a 10 year old. We moved house when I was 11, with it went the view. I missed it. But life from this bedroom window was bliss…
As a kid, I used to read the Beano, watch football, collect football posters and stare out at the world from my single glazed red ledged window, the bliss of which I captured on camera above. I had a great view of the east part of Bangor out that window and whiled away the hours listening to BBC Radio Ulster and BBC Radio 5 Live while playing Lego or studying the latest signings of Glentoran and Spurs. On a good day I was down the park kicking ball at Linear Park, our local grassy area. I could see Towerview Hill from my window, and I used to think that was high and miles away… 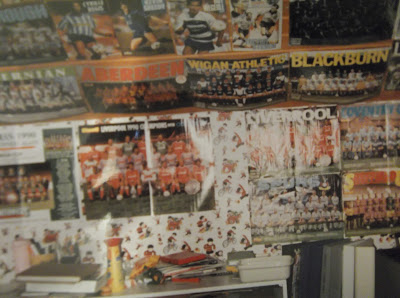 There were loads of kids in Marlo, Kilmaine and Ashbury those days. I enjoyed a great childhood in one of the less affected parts of Northern Ireland in that era. Bangor was often referred to as a “dormitory town” to Belfast but still had it’s divide and strong Unionist population – you wouldn’t walk round in a Celtic or Ireland shirt if you wanted mates, but from this small window I viewed the world from afar. I hope to return to that street some day – I left it when I was 11 years old. 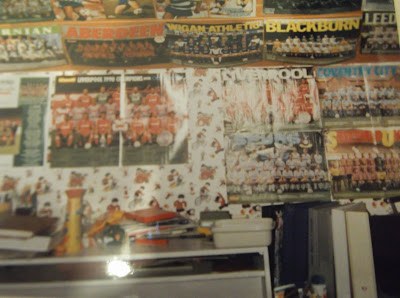 Love the football posters. My favourite teams to begin with were Glentoran, Northern Ireland, Spurs and Liverpool. It was peer pressure with Liverpool (though I went for Wimbledon in the 88 Cup Final) and my family are mostly Tottenham fans. Somewhere on that ceiling lay a Bournemouth team photo and the Glens won 4 trophies that season. I wouldn’t swap my childhood for anything, thanks Mum and Dad. It’s nice to have escaped that lonely window and seen some of the world. Same world everywhere you go…people are people…I still stare out my window and listen to BBC Radio 5 Live. Guinness has replaced my Orange Squash, and adulthood my childhood…
Where Was It – Marlo Drive, Kilmaine, Bangor, Northern Ireland, United Kingdom, Europe, Earth, Solar System, Universe
When Was It – From 30th March 1980 until mid July 1991 this house was home
When Was It My Bedroom – From about 1986 until July 1991
What was on my 10 year old desk? – A bottle of Matey bubble bath, crayons, an atlas, some school books and somewhere a wireless radio…
Decoration – Beano Wallpaper and wooden ceiling
Best Memory – Watching Northern Ireland draw 1-1 with Algeria on a black and white TV in my room live from Mexico in June 1986. It was me, my Dad Joe Blair, Raymond Fitsimmons, Neil Fitsimmons.
Best Thing About It – The view out the window and opening the window to let the fresh air it.
Do I miss it? – Of course, every single day…
Key Song –
DIRE STRAITS – WALK OF LIFE (“yeah you do the walk, yeah you do the walk of life”)
The Only Video Of Marlo, Bangor on YouTube (nothing similar to my childhood however but still…):