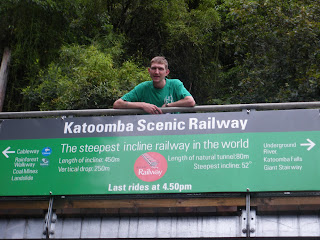 If you were asked where the world’s steepest railway line was, you’d probably think it was in some mountain range in America, or even mid Europe. You’d be wrong. It’s in Katoomba, a small village in the Blue Mountains, in New South Wales. Right here in Australia. It only has two stops, two stations: the bottom station which id in Jamison Valley and the top station which is at the south end of Katoomba, just above the Jamison Valley. Another of our Blue Mountains adventures involved seeking the train station and experiencing it. It was just me and Daniel. 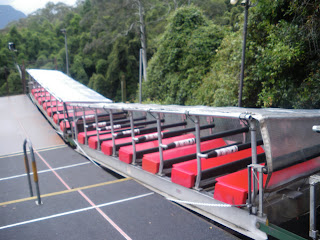 One day in Leura, on our trek back past the Giant Stairs and the Three Sisters we decide to make a dash and see if we could catch the Scenic Railway, which has its last train daily at 16.50 pm. It had been already a long day of trekking past waterfalls, canyons, rockfaces and forests. It would have been a nice relaxing idea to catch the train UP and walk back to the hostel from there. We raced along the Dardenelles Pass and the Federal Pass and soon had arrived at the special cut out section of the forest, the lower part of Scenic World. 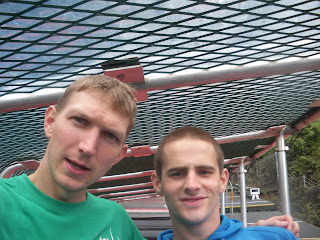 Here was
– the entrance to the old Miner’s Village (we covered that on another trip);
– the passage which would lead past the Landslide, Golden Stairs entrance and to the Ruined Castle;
– a route back up to Katoomba Falls and Witches Leap;
– Scenic Railway: the world’s steepest railway line;
– Scenic Cable Car: the alternative way up.


However after a long walk we finally arrived, half an hour early at the lower entrance to the world’s steepest railway line. But…it was closed. Even more ironic: IT WAS CLOSED FOR THE ONLY DAY IN THE DECADE!! No joking, the guy came over with his radio and told us they were fixing cables and that the railway line was off, we would have to catch the cablecar up instead. Gutting, and as we hadn’t booked another night in the hostel, it looked like this may have been our only chance to go on it. 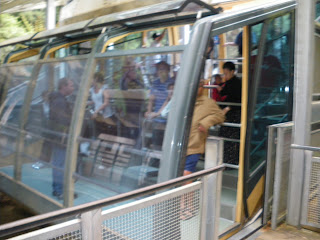 So reluctantly instead we got the Cable Car up for the cost of 10 Dollars and headed back to the hostel. The cable car is actually Australia’s steepest cable car ride, so it wasn’t all in vain. Its name was the Sceniscender, whose first SEVEN letters almost spell soenisc/SOENISC, that famous Northern Ireland Supporters Club that I once set up and chaired… 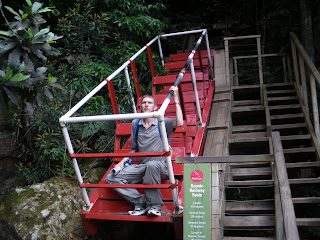 We ended up booking another few nights anyway and decided to do the Steepest Railway Line the following day…so after another day of intense trekking, we arrived on time for the 16.50 pm express train world’s steepest railway line on platform one straight back up to Katoomba! We boarded the train and we were the first 2 passengers “on board.” Its not much of a train actually, but still was great to do. 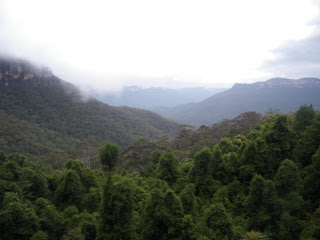 I revelled in the view from the bottom, enjoyed staring up the track at how steep it was, and was impressed by the friendliness of the Aussie staff. The guy at the station on the way in said to me “you guys were here yesterday the day we were shut weren’t you?”. Of course that was us. And now we had hopped on, paid 10 Dollars (we paid on exiting) and been up the world’s steepest railway. Another milestone, but hardly the best train journey you’ll ever have! Within 5 minutes we had already reached the top! It was over in a flash and I had videod the whole thing. 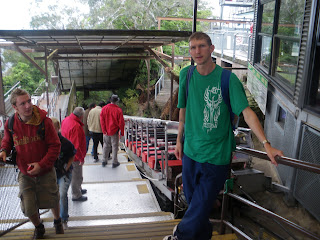 
Where is it? – Deep in the Jamison Valley, Blue Mountains, New South Wales, Australia.

THE DAY THE WORLD’S STEEPEST RAILWAY LINE WAS SHUT FOR THE ONLY TIME THAT DECADE:

GOING UP THE ALTERNATIVE CABLE CAR/SCENISCENDER INSTEAD: