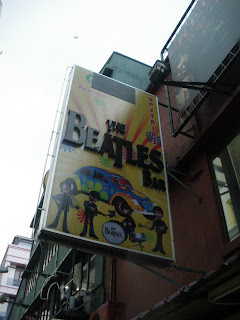 Its amazing you know where and how you find things. This one was random – I found a “Beatles Bar” slap bang in the city centre of Kuala Lumpur, Malaysia! It was by chance. I mentioned before how English traveler Niki Whitley spent a day with Natalja and I and helped us firstly by loaning me her Lonely Planet book and secondly by helping us find a hostel. From her book, I chose randomly the “Wheeler’s Hostel”, probably only because Tim Wheeler is the lead singer of Northern Irish band Ash. 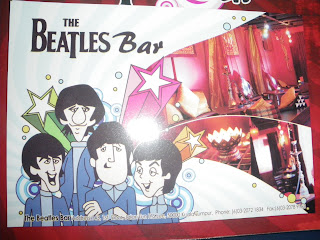 On route to the hostel down unfamiliar KL streets I saw a sign with an image of the Fab Four and the yellow sign read “The Beatles Bar.” I’ve got to go in there I thought. I got into the Beatles partly through my Dad (his era) and partly through my love of Oasis. The Beatles will probably never be beaten. They stand alone as the best band of all time. I don’t know many people who would disagree with that. 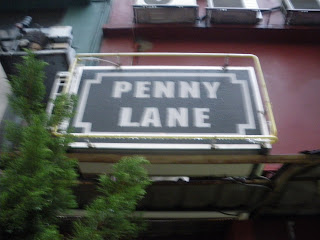 To get into the Beatles Bar was tricky. There was no clear entrance, no door and even the door which looked like the entrance was a sealed shut gate with a padlock on it. Every time I walked past I wondered how the hell do we get in there?? The bar is situated on the corner of the junction between Jalan Tun HS Lee and Jalan Hang Lekir streets. These are both in the Pasar Seni area, very close to the river, the central market, Pasar Seni station, and our hostel. The bar appeared to be upstairs. Nearby there were signs reading “Penny Lane” and “Yellow Submarine” as some kind of PR stunt to lure people into the bar. It worked. And why shouldn’t it? When in Kuala Lumpur – go to the Beatles Bar. I finally asked a shop vendor where the entrance to the Beatles Bar is, as I simply didn’t want to miss it and hoped I could have at least one drink in there and a nosey around before leaving. She told me that it only opens between 6 pm and 2 am every night, and the entrance was indeed the locked gate I had seen before. 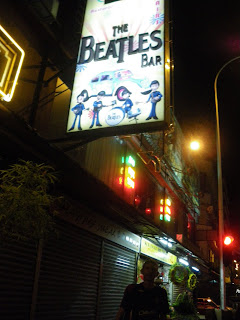 After the night out with local lady Angel, Natalja and I were off to the Beatles Bar. Fancy red velvet walls lead up to the entrance. The bar is small, dark and slight (as the photos will reveal). The “bar” part itself is merely just the size of a table, but an exquisite one. The decor is worthy of a place named after the world’s best band. There are no photos or images on the walls of Paul McCartney, John Lennon, Ringo Starr or even George Harrison. There are free postcards (well there was ONE left – which I only got thanks to the Thailand guy in the seat behind who gave me it as a kind gift. I posted it to Dad – hope he got it!). Once inside we sat down at a nice black table by the window, overlooking some of the busy bustling night streets (and near the night market) of Kuala Lumpur. Each table has an exquisite menu with a good range of beers, wines, soft drinks and cocktails. I wanted to take the menu and keep it, but again because I’m trying to travel light, I had to resist. Posting Dad the postcard of the Beatles Bar and taking photos was a lighter, easier way to do things so that’s exactly what I did. 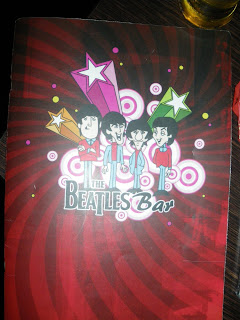 There was live karaoke on, and it wasn’t amazingly busy in there. There were comfy sofa style seats, separated by curtains and comfy pillows. The karaoke was happening on the bar’s corner, opposite where two English guys were sat – travelers from London. The rest of the bar was people from either Thailand or Taiwan. Natalja and I sat down and I ordered her a red wine and me a Tiger Beer. We had just been in Singapore a few days earlier and it was the nearest beer on the menu. They had NO Malaysian beer in The Beatles Bar, which was a bit upsetting as I love to sample the local food and drink in places I visit. 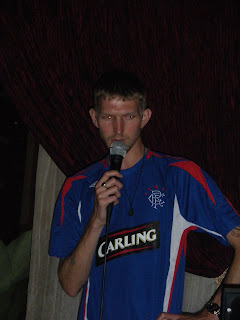 None the less we got the drinks in and I got out my Oasis – (What’s The Story) Morning Glory? album for a photo and video moment. The significance of this is that on my last day and night living in England, Dan from work presented me with the CD and said “take it round the world with you – any time you find a CD player – crank it on!” I’ve kept the promise and took random photos and videos of it here and there to prove how far that CD has come, and how many CD players it’s been played in! 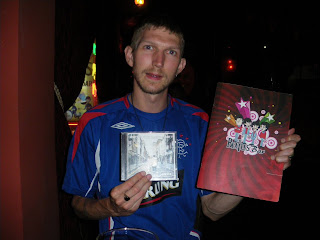 It felt very relaxed and happy in there. Its a pub with atmosphere to match its title. Given, the title itself is merely a gimmick and a tribute to the Fab Four, its hardly likely its ever been endorsed or even visited by any of the Beatles. The English guys sang a few songs, I cannot seem to remember which ones though. Perhaps “Billie Jean” by Michael Jackson was one. After this, the host, who was a great singer (DJ, singer and possibly the land lord) came over to me and said “you have to sing one.” Of course I wanted to. I buzz off that kind of thing. I had hoped they would have Oasis. But alas they didn’t. And although the thought of banging “Cast No Shadow” from my CD onto the old dukebox crossed my mind, I decided just to check out the songs they had and pick a few. Natalja was much too shy to sing – she hates that type of thing. I love it and I don’t care how bad a singer I am, I’ll get up and sing and entertain. In the end I sang 6 songs. In the period of around 2 hours we were in there. 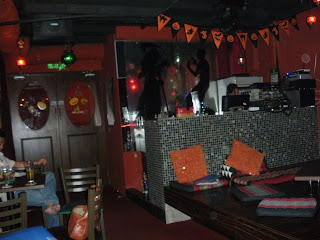 Natalja sat on wireless internet. I enjoyed the surroundings and spoke to the locals. The bar lady was very friendly and welcoming. The first song I sang was a Beatles classic, it had to be really…I did “Let It Be.” From that song I always loved the line “in my hour of darkness there is still a light that shines on me”, a nice truthful arrogance and belief from Paul McCartney there. One which I repeated to my small audience in the Beatles Bar. Next up I did a double of Eagles classics, probably destroying both of them, but anyway…it was Desperado followed by Peaceful Easy Feeling. After a break where the others in the bar all got up and sang I then did a final 3 songs and thanked The Beatles Bar, Kuala Lumpur and Malaysia very much for their hospitality. I sang Eternity by Robbie Williams, a favourite dreamy summer ballad of mine, mixed with the Simon and Garfunkel hit “Cecilia”, which I changed to “Natalja…” even if she was too immersed in internet land to notice. 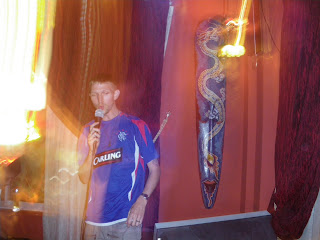 My final pilgrimage in The Beatles Bar was The Eagles “Hotel California”, for a finale most of the bar joined in. And that was that. We headed off into the night after that, saying goodbye and picking up e-mail details for Claire Leng in the bar. I also had my photo took behind the bar and in front of the neon sign. If you’re in Kuala Lumpur, don’t miss it: THE BEATLES BAR!!

What Was It? – The Beatles Bar

The Beatles – Let It Be:

VIDEO ONE INSIDE THE BEATLES BAR:

VIDEO TWO INSIDE THE BEATLES BAR: