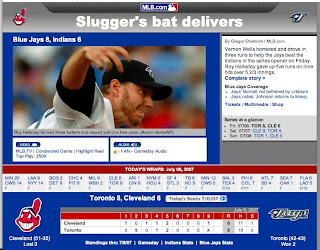 I had visited Toronto in 2001 and even stepped foot inside The Rogers Centre, home of the Toronto Blue Jays Baseball Team (who won the North American title loads of times in the 1990s), but didn’t on that visit see a match. On my second visit to Canada, and Toronto, I decided to get a ticket for the Blue Jays match. It was July 2007. I was staying at the Planet Traveller Hostel in Kensington Market area, which was really just a 15 minute walk to the Rogers Centre, or the Sky Dome depending on what you want to call it. The Sky Dome is in the shadow of Canada’s National Tower and has a revolving roof if the rain gets the better of it. Its the home of Baseball. I couldn’t believe it when I found out a ticket was only 9 Canadian Dollars (£3 I reckoned)! I got a seat right in the middle overlooking the main base. I was aware that Mike and Tash from the Hostel were going to the match, but they were meeting a relative so when another traveller, Lee suggested going, we saw the sights of the city together, relaxed with a beer and made our way to the Sky Dome for the big match, for which the kick off (or base – off) would be 7.07 pm. Before this there was loads of pre-match banter with cheerleaders and adverts on the big screens. It certainly wasn’t like a British football match! Before the match, Blue Jay player Frank Thomas was also presented with an award for getting 500 home runs, putting him in the top 5 all time hitters in the history of the game. Quite an achievement! Lee and I took our seats, I had bought a match programme and we tried to work out the rules as the match progressed. It was the start of a great night out at the baseball. 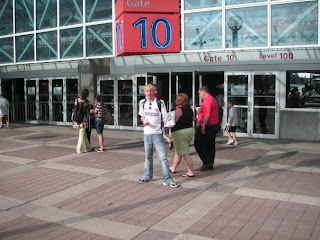 At first we couldn’t understand how you got someone “out” and also why you could have more than one player from each team at the same ‘base’. At one point there were 5 Toronto players on the first base, we assumed four of them would be out, but in the end, they all got round. That was in the second game of the match, and Toronto at that point were winning 5-1. Though in honesty you wouldn’t have guessed. Lucky there were scoreboards everywhere. The sun beat down on Lee and I in the top of the stand. We enjoyed the various music and interludes between games. It broke the evening up nicely. There was also beer service direct to your seat, as well as popcorn, ice cream and anything you fancied. We didn’t want to buy them off a seller dude though, as we were both travellers on a budget! 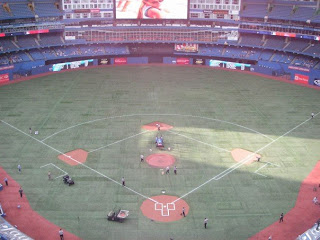 So during one of the games, I thought nothing of hopping downstairs into the stadium aisles to queue for a beer. That way I could buy two beers and carry them back to the seats without having to pay a tip. The queue was long and the staff were very friendly! It was 8 dollars for a beer. I bought one for Lee and one for me. That’s about £8 really so at that price, we didn’t plan on getting pissed up at the baseball! While standing in the queue another of life’s weird moments happenned. As I often do (believe me) I was wearing a Northern Ireland football shirt (and some dodgy John Lennon shades, but anyway…) and a guy and his son ran past me with popcorn and beer shouting “Up the Ulster – Northern Ireland!”. As I turned round they had ran back into the section where they were sat. I didn’t get the conversation on who they were, how they were and whether they wanted to join us for a beer. I also had some Northern Ireland flags with me, which they would have also welcomed! The moment was lost, and I went with the thought that they were based in Toronto, big Blue Jays fans, but originally from my little part of the world. 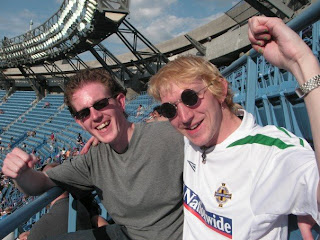 When I got back to my seat, naturally I asked Lee if there was anything exciting happenned. The score was still the same and apparently I didn’t miss much. That wouldn’t happen at a football match. I would never leave during the match! I was just getting into the Baseball and trying it out. Looking back I have to say that the beer (a Bud Light I think) was so ice cold and so refreshing in the Toronto sun. Soon the sun would fade and we were witnessing the CN Tower totally lit up against a daring sky. This was a great moment in life. Beer in hand, live sport in front of me, watching other people enjoy themselves and watching the CN Tower lift go up and down. A great city Toronto! Pretty glad I went to the Baseball. Soon though the match was almost over and I had told Lee of my plan. 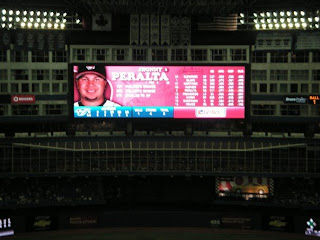 I had 3 flights to catch the next day (got a bargain) on route to New York. Another first was just around the chimney corner. I’d be hitting the Big Apple. The baseball match started at 7.07 pm. It was still going at 10.07 pm. I think we left during the last game, when Toronto were 8-6 ahead and in the end this was the final score. My plan was to catch the last street car, underground and then bus to the airport and it was going to be tight. I wanted to spend the night on my own at Toronto Pearson Airport because my first flight the next day would be at 6 am. No need to book accomodation or sleep. We left the Sky Dome, walked back to the hostel where I grabbed my bag. I said my goodbyes to Lee (as it happenned Lee would be in some of the same places as me for the rest of his travels, but not at the same time). We’ll meet for a beer in England some day! I then traipsed through the busy, vibrant streets of Toronto to the streetcar/tram stop by Dundas, where I got a packed tram to Spadina Tube Station. A very relaxed tram journey with some Blue Jays fans ensued, before I would exit at Kipling Station and realise I may have missed the last bus to the airport. Not to fear, I found another bus stop, where the 24 hour airport bus led me on the third part of my four part exit from the land of Canada. What a place! If you’re there, go to see the Toronto Blue Jays!

Cost of Ticket – 9 dollars (decent seat!, there were cheaper ones in shit seats)

Price of a Beer – 8 dollars

Would I go back to the Baseball – Hell Yes!

2 thoughts on “Toronto Blue Jays v. Cleveland Indians – A Night At The Baseball”