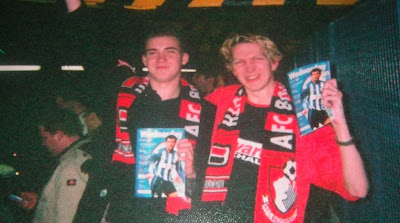 I had been longing for a Cherries away match since my first visit to Dean Court. It was not a case of picking out a fixture list and hand picking an away match to go to. Everything had to be right. We hadn’t won an away match in 6 months (I think 1-0 at Notts County was the previous one), it was on St. Patrick’s Night, it was in one of the biggest stadiums in the UK (indeed used for Euro 96 and many an FA Cup Semi Final), it was up north somewhere and its team was one of those arrogant “we’re too big for this division” types. That’s the sort of attitude that makes you not a football fan. You’re in this division because your level of football belongs here. However one March night in 2004, Sheffield Wednesday were made to look like a conference side, plucked away by The Cherries in their so called fortress. 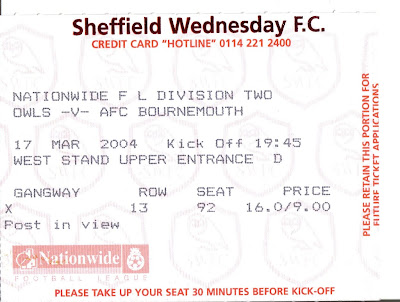 I remember the morning started early, 11 am first orders in the Dolphin pub in Springbourne. I met Neil and Austin there, we already had the match tickets (a schoolboy effort from ‘The Owls’) and were booked on the AFC Bournemouth supporters coach. It was my first Cherries away match, the first of many and in some ways my first step on my journey around England following my wee club. Many faces accompany the Cherries for away games, none more so than John/Nonny. His passion for his football team could teach many fans a lesson. I was just a face in the crowd with my Northern Ireland fleg draped round me and a dream that we would bate Sheffield in their massive stadium in Yorkshire. 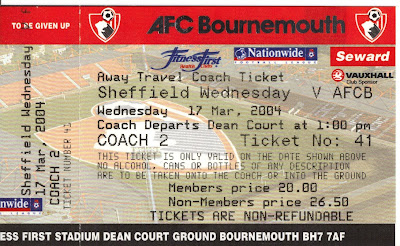 Alcohol was not allowed on the supporters coach, but Neil, Austin and I brought a carryout anyway. Four tins of Carling went down a treat as our bus made its way to Sheffield. A stop at Burger King on the way was mandatory, as was the fact that we arrived near Hillsborough about 2 hours before kick-off. Superb and a chance to enjoy some Northern pints. Dressed ridiculously in red and black Neil and I were refused entry to the Traveller’s Inn. If ever there was a contradiction in life that was it. It was a case of Traveller’s Out. Not even a Sheffield Wednesday hooligan would have stopped my craving for a pint. We went through the other entrance to the Traveller’s Inn and it was packed to the rim with Owl fans, no room to move and frankly I wasn’t going to wait 20 minutes to get served. We were the only 3 away fans in there. Then we left and crossed the road to another pub, which was quiet and welcoming to us. I didn;’t see any other AFC Bournemouth fans in there, though. Looking back I think about 300 of us made the trip, but facts and figures will be out there in an old programme I have. 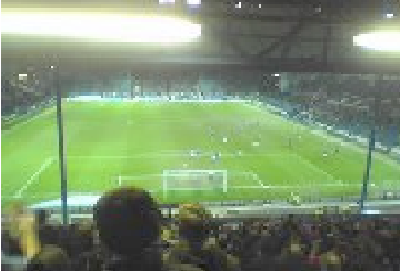 We were glad that pints were £1.70 in the pub but they only filled them up 7/8 of the way…a Northern thing most probably. We had a few and then headed into the away end. A massive stadium and we had the entire section behind the goals, which we couldn’t fill. The stadium was fairly empty that night as well, with 22,000 of the 40,000 seats taken (if memory serves). We went to the back of the stand and started joining in the red army chants. We were sat just behind Nonny, who at several points in the match would do his “Red Army” chant on his own and it rattled through the entire stadium, making his voice the only one you heard. We hadn’t played Sheffield Wednesday at Hillsborough for a good few years, so it was perhaps the first time that many Sheffield fans had experienced Nonny! The scene was all set and I was loving it.

Even more so when Carl Fletcher banged home an early free-kick in front of what looked like the Sheffield Hardcore. At any rate they were totally silent that night. We looked totally in control, with even Lewis Buxton playing a part in the second goal, which was a great move culminating in Steve Fletcher sliding the ball past Kevin Pressman at the other end. Kevin Pressman was the fattest footballer I had ever seen, and Fletch cut across the ball and put it right in the corner, giving us a two goal advantage. The party was on. We kept dancing and indeed went close to scoring a third. Sheffield Wednesday didn’t really threaten and at the time were mid-table obscurity. It was funny seeing this massive team and massive stadium languishing below Rushden and Diamonds at the time. Later on in life, Rushden and Diamonds would slip down 3 divisions and the Owls would scramble their way back up in a dodgy play-off final (2005). But for this night, AFC Bournemouth showed them how to play football. O’Driscoll’s barmy army were in full voice and we were only a few points off the play-offs. Little did we know that we wouldn’t win another home match all season (despite an inspired Garreth O’Connor show in the last home match v. Stockport County) and would settle for a well deserved mid-table finish. This was the first AFC Bournemouth away match I attended and it got me addicted to the drug. Warren Feeney also acknowledged my Northern Ireland fleg in the stand after the match and we were headed south again. Totally immune from any discussion of a sad disaster that had occcured in Hillsborough in 1989. We had a great night and the Cherries were fantastic!


Bars we visited – The Dolphin, The Traveller’s Inn (or Out), Railway Tavern?