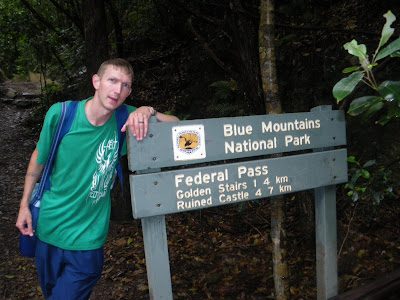 While in The Blue Mountains, and in particular the Jamison Valley region, we wanted to do every trek we could in the timescale. The two furthest away and toughest treks were to the “Ruined Castle” and “Mount Solitary.” Both were basically day treks, starting off from Katoomba. We decided we would rather see the Castle, however ruined it was. On all the treks we did, we had to walk at least a mile before we even got to the start, so you could basically add on 2 miles every day to our treks. This was simply the walk from our hostel to the start of the walks, normally at Echo Point, Leura or Scenic World (a commercial part of the Blue Mountains). That morning was the worst weather I’d seen in Australia, very wet and windy, and the rain got heavier and the mist got mistier as we left the hostel in search of a former castle, as we saw it. 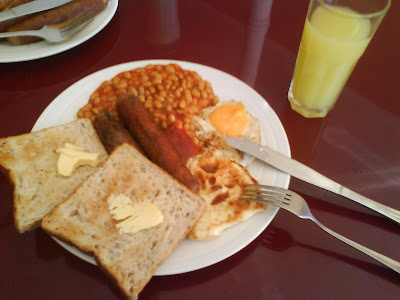 A full fried breakfast set Daniel and I up for the trek ahead. We often had these full breakfasts while staying in the Blue Mountains to give us that energy up until our lunchtime stop. The day of the Ruined Castle trek, we were soaked to the skin before we had even left Echo Point, where the trek began. We took the Prince Henry Cliff Walk to the Katoomba Falls to begin with. This was the main waterfall in the Katoomba area, which we had not yet seen. Dan and I both climbed up the waterfall, taking great care not to slip in the rain. There were a few other tourists around, either slow backpackers, elderly people with ridiculous rain coats or groups of Japanesers taking photos and walking so slow, they were clearly not up for the trekking. Once at Katoomba Falls, we had our tops on to protect our tops from the rain. I stupidly had my passport, map and guide book in my front pocket and it was drenched through, as was my backpack. Lucky I keep my passport in a cover, otherwise the pages would have stuck together and the numerous stamps would have run. You wouldn’t have been able to tell Ferihegy with Treviso. (You may not even have a clue where those places are, actually). 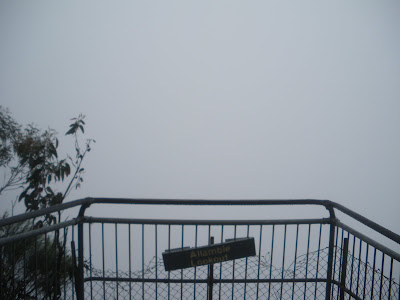 After Katoomba Falls, there was a place called Witches Leap, another impressive waterfall. On a day where it was wet any way, the amount of water coming down was obviously much greater than normal and so added to the effect of this waterfall, even if it blurred the images from mine and Dan’s cameras. From Witches Leap it was a case of continuing on down the Furber Steps to the bottom of Jamison Valley. On route there was Vera’s Grotto, another random lookout section over the rocks, waterfall and forest. At the bottom of the Furber Steps, it was a straight easy walk to the Old Coal Mine Area. This area has been made into a mini-easy theme trek area, which includes the “Katoomba Scenic Railway”, (the world’s steepest Railway Line) and also the cable car (Scenic Skyway) which actually takes you back up to Katoomba, to a commercial centre called “Scenic World.” 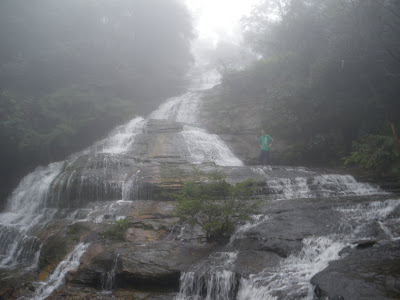 To get to The Ruined Castle you have to go on past this mini commercial part and back into the forest. The Ruined Castle trek is listed as being 6 hours return in some books and 8 hours return in others. The weather was terrible and the path was very narrow, so we weren’t sure how long it would take us. We had enough water and a full lunch and snacks to keep us going anyway. The route to the Ruined Castle would be past the entrance to the Golden Stairs (another trek for another day), through a landslide and through a never ending forest. Beyond the Ruined Castle there was another trek, which was recommended to be an overnight stop over to a place called “Mount Solitary”, literally as it suggests, a random mountain in the middle of nowhere. We weren’t entirely convinced about doing the “Mount Solitary” trek to be honest, in the end it was the only thing on our side of Jamison Valley (and within the valley itself) that we didn’t do. Plus we didn’t have a tent, proper camping equipment and had already paid for the night at the hostel in the Blue Mountains Central Backpackers. 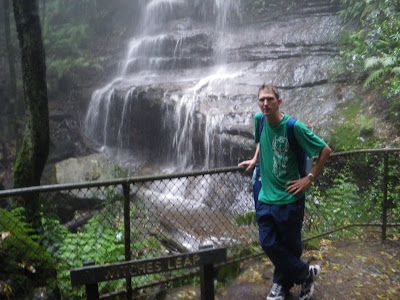 So from there the trek to the Ruined Castle started. All the books, brochures and leaflets didn’t have any proper information on the “castle”, whether it was an old castle, a fort, or even where it was. It was all rather dubious, but none the less we were up for one of the most random treks of all time. In Australia they don’t seem to call it hiking, walking or even trekking. They call it “bush walking.” From the start of the Ruined Castle path, it became obvious that we were heading into the wilderness. There would be no obvious stop off points, information or look out points. It was different from the previous few hikes we’d done. This time we had to find our own way, although despite the poor weather, the route was obvious. 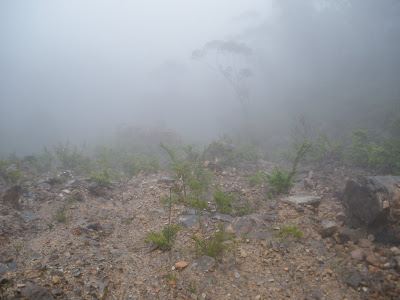 After climbing through bushes and a forest track, we got to what is known as “the landslide.” The air was so misty, we couldn’t see a thing 3 metres above, behind, below or in front of us. It didn’t help that we already drenched. A great choice of a day to do this trek to be honest – as we did it in the worst conditions and properly experienced climbing through the “landslide”. It looked like a proper landslide, rocks were everywhere. I sang “caught beneath the landslide” by Oasis as we walked through them. It was an old favourite song of mine and it fitted in. This landslide wasn’t dangerous, the rocks had fallen back in the 1930s (I think) and to our right (on up the mountain, it was mainly trees and secure rocks. We didn’t see any rock falls or potential avalanches/landslides. Beyond this we passed by two mini waterfalls, coming from the top of the mountain on the right. The walk wasn’t deep into the valley, but about 1/3 of the way up. To our left was a massive slope, one wrong step and we’d have gone flying into the forest!. 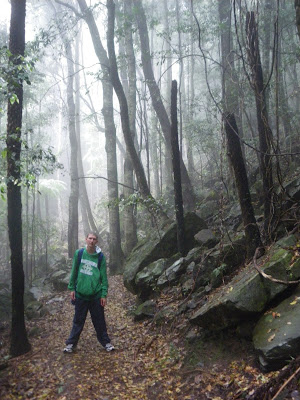 We also passed by the entrance to the “Golden Stairs” another of the treks, and on a good day with time, we’d have done that as well. However I had wanted to be back to the Scenic Railway before 4.50 pm (as that’s the last train back up), and doing the Golden Stairs that day might have prevented us from making the last train. So we left the “Golden Stairs” for a few days later (and I’ll write about that trek separately). On we went, passing a well equipped elderly couple. There was certainly nobody else on this trek the day we did it! Finally after a few miles, we got to a clearing in the main path, and two the right looked like a small mountain (it was quite high actually) and an arrow pointing to “Ruined Castle.” We couldn’t see the Castle yet but were intrigued and searching for it. The route up to the Ruined Castle was very very steep. 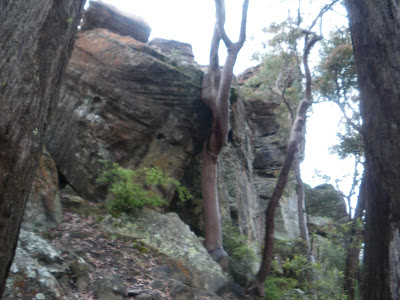 We worked at it at a fast pace, climbing up and up and up. Looking back down was very steep. It seemed to have no end, and no peak. We just kept walking and walking. Until we found a large reddy/grey rock. A massive one. I joked that it is probably the Ruined Castle! In fact…I wasn’t far wrong. A few hundred metres on round and it seemed we had reached the peak. Now all we had to do was find the castle. But where the hell was it? We walked past a few more rocks and on round. Then decided to stop for something to eat. We had some sandwiches made up. I had Hungarian Salami and Cheese in mine. 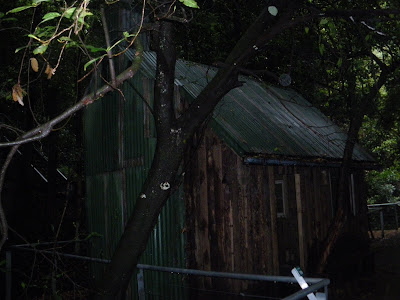 After my first sandwich, I walked further round on my own and shouted back at Dan “I can’t see any castle, and it looks like this is the edge of the cliff!” it was the edge of the cliff. The view was something else anyway, we could see for miles and we had climbed quite high up, but sadly there was NO Castle in sight!! It was unbelieveable. No museum, no signposts, no obvious signs of an ex-castle, just a bunch of bricks on top of a steep mountain in the middle of the valley. It was all a big trick. There is a “Ruined Castle Trek”, there are signs to a “Ruined Castle.” But after about 3 or 4 hours of hiking to get there, sadly there was no castle! 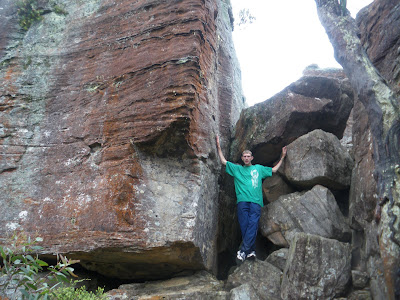 Aw well, we thought, another misleading tourist trap whilst in Australia. They’re good at it these Aussies! They lure you into something, bigging it up and making it sound amazing, and then its not at all. Although we had no qualms and didn’t moan. We were happy to be at peace (with a few cockatoos!) on the top of the mini mountain, surrounded by massive red and brown rocks, supposedly this was “the ruined castle”, or at least as close as we were ever going to get to a “ruined castle.” We climbed up the rocks, savoured the amazing views. I took some photos and videos and we both climbed to the “peak” of the “ruined castle”, basically climbing up steep rocks until we were higher than anything on the mound. The view was great and I hung my Northern Ireland flag over the peak to prove we had done the “ruined castle”, even if it was a slight let down. 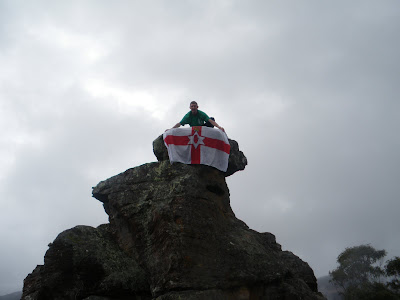 We didn’t let that stop us, and after a bit of time chilling out at the peak of the fake castle, we decided to head back towards the Katoomba Scenic Railway and catch that 4.50 pm final train up through the mountains. We met the elderly couple again on the way back, told them of our disappointment at the “ruined castle”, while they told us of their plans to camp over at Mount Solitary. Fair play we both thought as we trekked down the same past and through the forest and landslide back to the foot of the main trek. On the way we had time to see the final two “sights” in that area, namely the old mining village (actually just a hut and a few mine carts) and also the rainforest room (just a bit of wood to make presentations on). It was all a good laugh, and we had done the Ruined Castle! 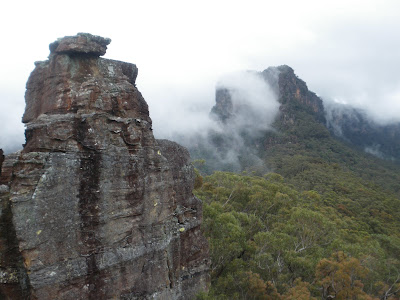 Wamdue Project – King Of My Castle

Oasis – Go Let It Out

VIEW OF BLUE MOUNTAINS FROM TOP OF THE RUINED CASTLE:

STEEP TREK UP TO THE TOP OF THE RUINED CASTLE:

CLIMBING TO THE TOP OF THE RUINED CASTLE:

WALKING THROUGH THE LANDSLIDE: