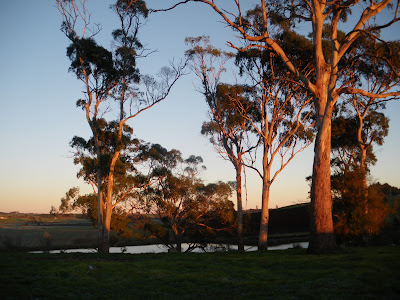 Ah the joys of farming and the obscurity of place names. A phone call one night from my boss Hayley went something like this “Jonny, can you be at Squeaking Point for 7 am tomorrow to cut cauliflower?”. Of course my answer was “Yes” but I was also hazarding a “where the hell is Squeaking Point?” at Hayley! The answer would be to meet Lynsey and Lee (a cool Australian couple) on a roadside corner at 6.30 am in my car and follow them. The roadside corner was somewhere near Port Sorell, east of Devonport, Tasmania. Aside from my phone (which cost about $40 AU) and my laptop (which I had with me) my only luxury back then was my car. Even beer and nights out had taken a back stage as I paid for a trip to Antarctica, slept in my car, ate the cauliflower I cut and worked as much as I could. Tasmania will always have a place in my heart. 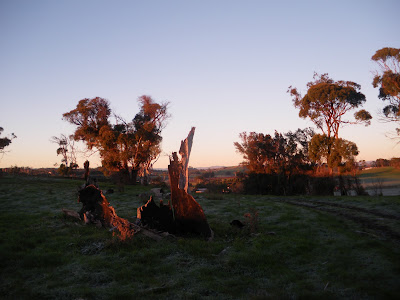 Frost had shrouded Squeaking Point with a cold winter morning appearance and while this made us cold, the rising sun added warmth and hope as we grabbed out paint strippers for another day on the cauliflower farm. Incidentally this was one of five cauliflower farms I worked on in May and June 2010. My first day working here was Monday 14th June 2010. I actually ended up leaving Tasmania just four days later, yet I was working right up until 3 hours before my departure from the island… 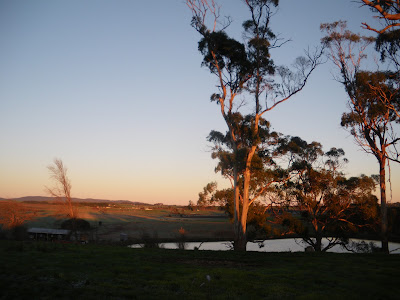 The first few photos here show the amazing sight of sunrise at Squeaking Point. The farm was owned by a guy called Matt Ryan and only a few of us were chosen to work out there for a few days. A pretty lake, glaring wilderness and the rising sun all added to the glamour of a job so tough and mundane it would test the stamina. Not for me, I’m happy to do almost any job and I was well used to the nitty gritty of farming life at the time. Moreover, I bloody well enjoyed it. 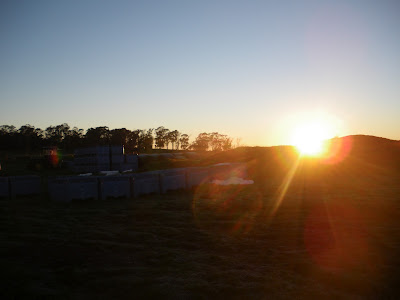 Sunrise at Squeaking Point had me firing on the Eagles on my iPod as we loaded the light blue crates onto the tractor ready for action. 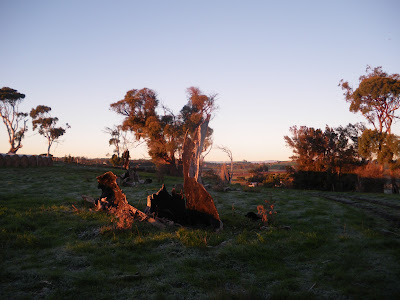 Trees, frost and grass at Squeaking Point. I never found out the reason for the name actually. Though it really does exist as that name and shows up online in a search here: Squeaking Point 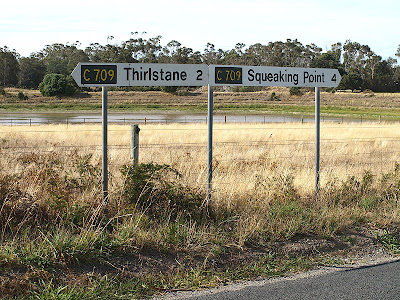 In fact if you really needed proof or wanted to know, it’s 6 kilometres from Thirlstane, on the C 709. In short its a small area by the water in the centre of northern Tasmania’s coastline. 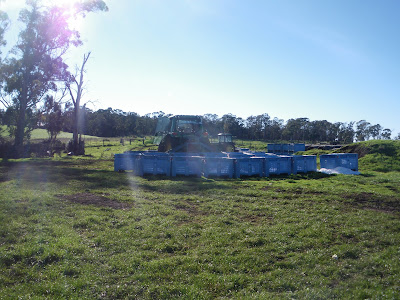 Ready for action at Squeaking Point. 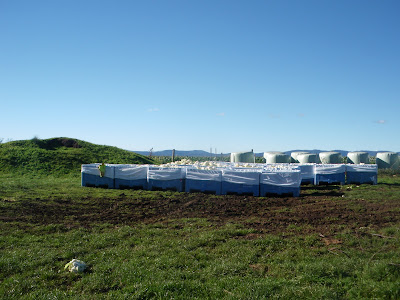 Break time at Squeaking Point. Plenty of boxes filled with fresh cauliflower, plus as ever the one that got away. 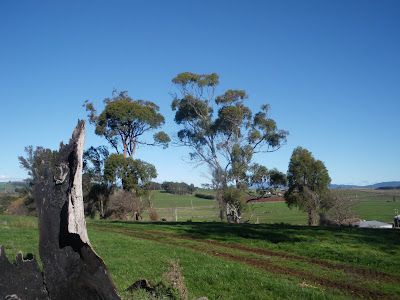 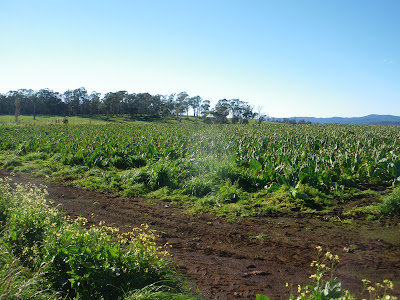 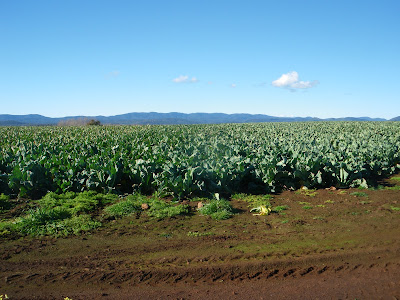 Miles of cauliflowers to cut. 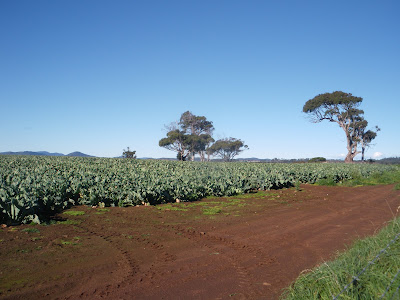 When I think of all the places I have worked in life, undoubtedly Squeaking Point had one of the best views from the office window. 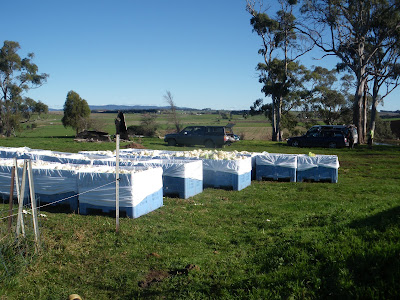 Lunchtime and my car in the background. 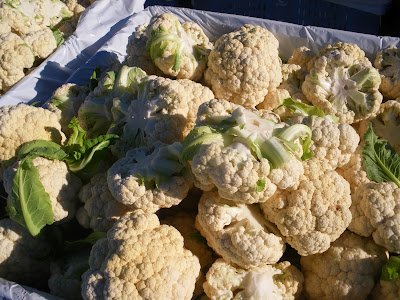 Loads of cauliflower we chopped at Squeaking Point. 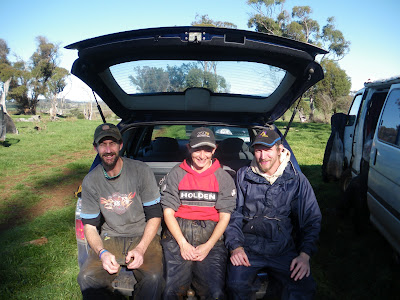 My favourite two Australians working at Squeaking Point. Enjoying a break with Lee and Lynsey. You will notice Lynsey is wearing a Guinness hat. That hat was won by me in a darts competition in O’Malley’s Irish Pub in Sydney in October 2009. I had been there with Natalja and we each got champagne and a Guinness hat. I swapped it with Lynsey for an authentic “Work Direct Hat” – a treasured possession. Work Direct no longer produced their own hats and this was the company through which most of my Tasmanian farming work was with. 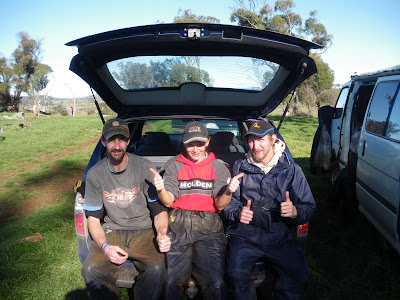 Again with Lee and Lynsey. 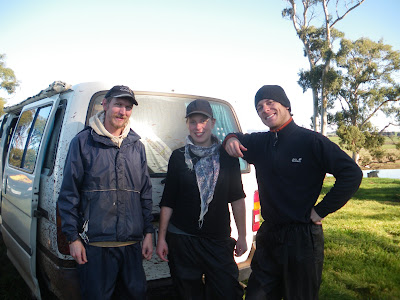 Aside from the Australians, there was also Jean and Vivien from Germany. I had worked with them a few times and even roomed with Jean for a couple of nights while staying at Molly Malone’s Irish Pub in Devonport. A really nice couple. Jean is a bit of a traveller too, his blog is excellent and can be accessed from the link on the right in the list of websites by people I know. 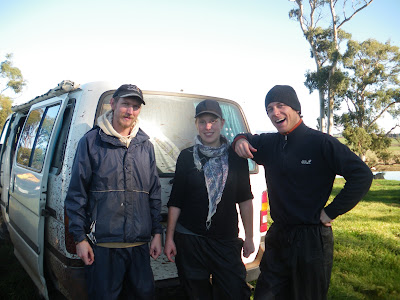 With Vivien and Jean after a hard day’s work. Their van actually broke down one day and the lot of us had to push it through the grass until it started! 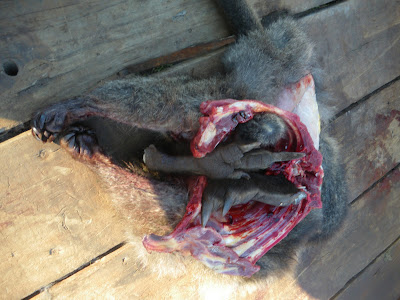 We found a dead wallaby on the farm. 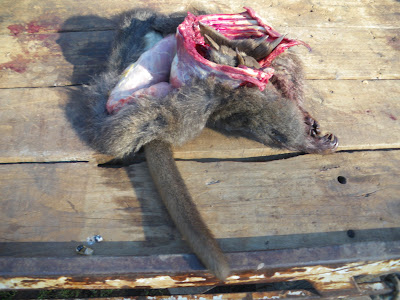 Roadkill in Australia is so common and so dangerous – especially at night you end up dodging all sorts of animals on the road. In Tasmania, the main animals I saw were deer, wombats and on occasion Tasmanian Devils. 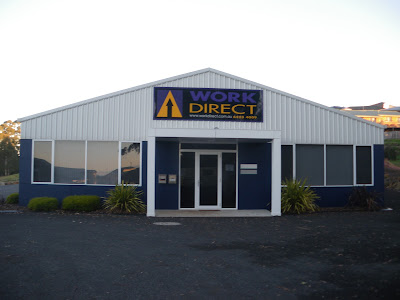 The offices that employed me at Work Direct! 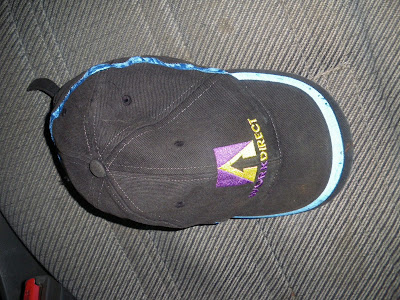 My souvenir and memory of that job is my Work Direct hat, thanks to Lynsey. I’ll remember Squeaking Point for that, and for… 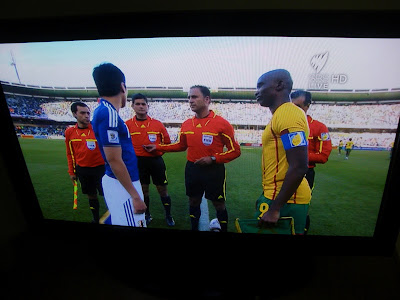 The football World Cup. The 2010 World Cup had matches starting at midnight, 2 am and 4 am in Australia. The night before my first shift at Squeaking Point, I got up early to watch Australia lose 4-0 to Germany. I found some irony then in the fact that my only co-workers for that particular day came from those two countries. It was fond memories at Squeaking Point, but ultimately over in a flash…
Where – Squeaking Point, Near Devonport, Tasmania, AUSTRALIA
When I Worked There – June 2010
What I Did – Cut Cauliflower
Who I Worked With – Matt Ryan, Lee, Lynsey, Tim (Australian), Vivien, Jean (German)
Rate of Pay – $19 AU Dollars Per Hour
Souvenir – A Work Direct Hat
Random Film Trailer –
VANISHING POINT:
Key Song –
MYSELF THAT WEEK LIVE IN MY HOSTEL ROOM – AWAY FROM THE WORLD:
I DIDN’T MAKE ANY VIDEOS AT SQUEAKING POINT BUT HERE’S A FEW MEMORIES:
SQUEAK SQUAD THEME:
GERMANY 4-0 AUSTRALIA (WORLD CUP 2010 THE FIRST DAY I WORKED AT SQUEAKING POINT!)

Working Wednesday’s is a regular feature from Don’t Stop Living – a lifestyle of travel. I worked on a cauliflower farm living my dreams…