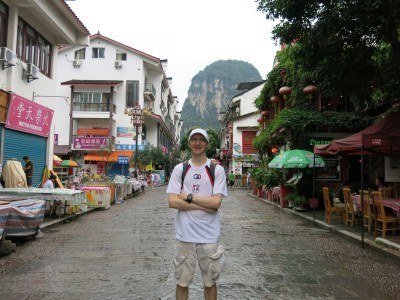 Even the most touristic towns and cities in China continue to be epic and inspirational. I’ve mentioned many times before that China is probably the best country in the world to really feel like you’re backpacking in. This is what you dreamed of China to be like before you ventured here, even in popular Yangshuo. A smoggy sky gapes down on a town hidden beneath limestone peaks. Food vendors sell snails, pizza, rice and seaweed in equal portions as you work your way through one of the most touristic towns in China. You pinch yourself time and time again. You’re really here and it’s all too beautiful. 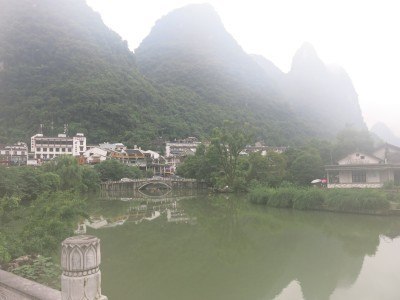 The dreamy spirit of Yangshuo

Our trip to Yangshuo was from the city of Guilin in the Guangxi Province. Guilin can seem modern and changing, like any big Chinese city. It houses a whopping 4.7 million. The city I’ve just left is about three times the size of my home country, Northern Ireland. I ponder on that in disbelief for a second but we leave the city’s monstrosity behind for another day in the lifestyle. As our bus veers its way down hills and valleys and past UNESCO listed limestone peaks, I sip on a 20 pence beer and I know life is bloody good. 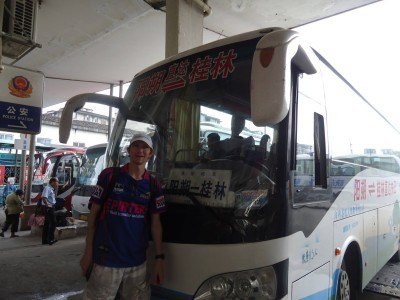 The bus from Guilin to Yangshuo 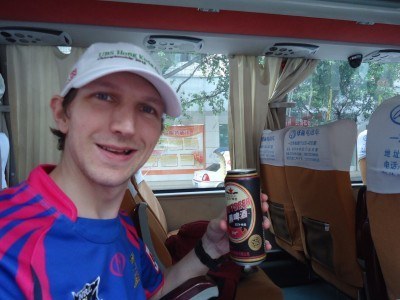 Beer on the bus to Yangshuo

I couldn’t even tell you where we were going. I have no cares in the world when I backpack through China. Time is of no element and we drift through endless unknown villages. My maps are all in Chinese, my girlfriend is by my side and we lap up the beauty of the bus trip before we arrive in sleepy spiritual Yangshuo. 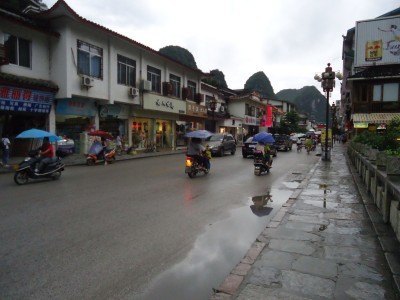 These days, Yangshuo’s popularity as a tourist hub to the non-Chinese is clear for all to see. In fact, most China holidays and tours now offer exquisite jaunts to the Guangxi Province and include Yangshuo on lots of itineraries. The Guangxi “Province” is actually an Autonomous region of China. It’s one of the Provinces I initially dismissed and assumed to be too touristy and too mainstream for me. But I was wrong. The mainstream is actually the river through the town and these are 5 cool things to do when you are in and around Yangshuo. 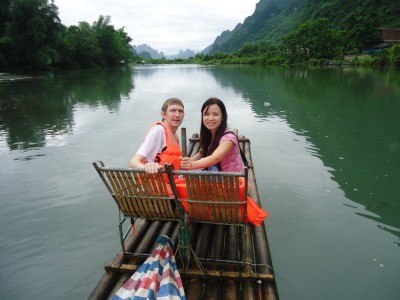 1. Bamboo Rafting
You might have read about our bamboo rafting experience on the YuLong River and it remains one of the most recommended activities in the region. While the rivers pass through the town, you’ll need a few buses to get out here to start your trip (check my post on previous link for a full guide). 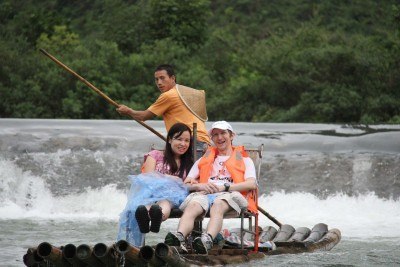 Bamboo rafting on the Yulong River near Yangshuo

Once you are sailing down the YuLong or the Li River without a care in the world, you will feel the magic. Photos and videos can never do this place justice. 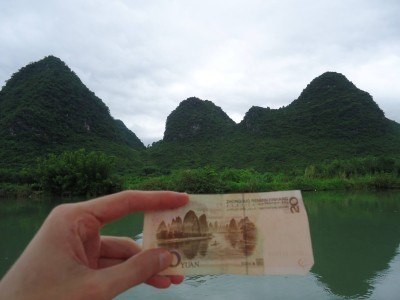 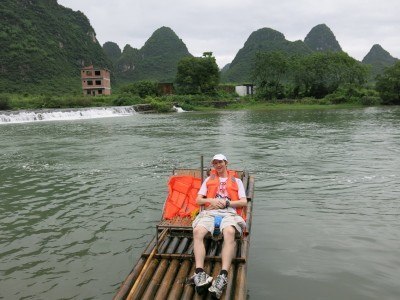 Actually the slow boat through China

2. Tandem Cycling
On a few of my China adventures I’ve loved the random cycling experiences through unknown towns and villages. On a wet day after the rafting we decided to cycle back to Yangshuo instead of getting a bus and it was incredible. 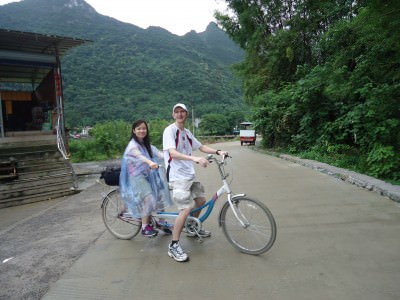 It was a very wet day and great fun as we got a tandem bicycle from the YuLong River to Yangshuo. The best thing about it is you are in control and can stop and admire the beauty of China all around you.

3. Night Markets and West Street
Yangshuo is famous for its night scene these days and the West Street is popular at night for markets, restaurants and cafes. It was here on West Street where I tried the pan fried snails (and didn’t like them so moved onto pizza!). 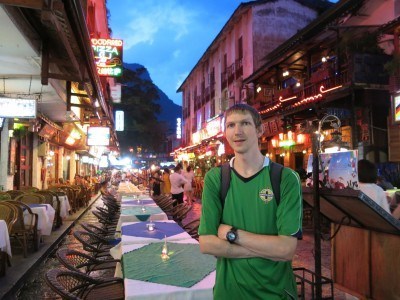 Of all the places I’ve been in China, Yangshuo is the place that has the most locals speaking English which seems really odd at the time and you have to stop and wonder how they did it! 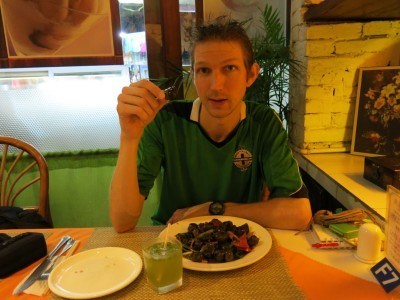 4. Moon Hill
Moon Hill is so called because of its unusual looking arch like a moon. It takes about 20 minutes to climb up to the arch itself. Some people want to head right to the top, which is a tougher route but obviously better views. The Guilin region Karsts that we visited are part of UNESCO’s World Heritage Sites list, of which there are over 1,000 of. 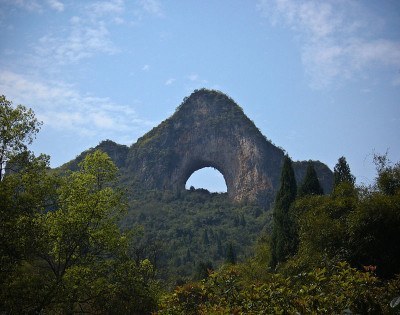 5. North Korea Bar
If you’re not planning on heading to North Korea on your travels, you can grab a piece of real Korean life here in the excellent DMZ Bar. Designed with a hint of Pyongyang and a revolutionary edge, the DMZ Bar claims to be the only North Korean themed bar on the planet. Here you can sip ice-cold imported beer dressed in communist suits while surrounded with flags and North Korean images. Next flight to Pyongyang please! 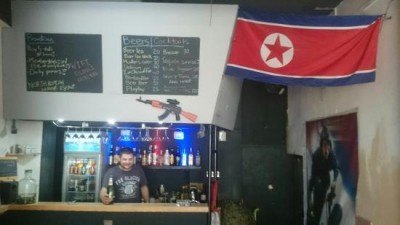 Aside from all this there are mud baths, rock climbing and plenty of hiking in this region. There is so much more I could write on Yangshuo of course, but this will do for now, the funniest parts of the time in this town were seeing a DickMonalds restaurant and a Fawlty Towers Hotel! 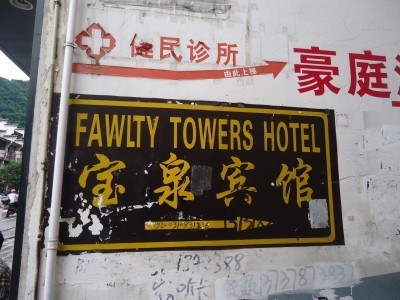 We stayed in the West Hostel in Yangshuo centre. It’s a truly beautiful part of the world and I can’t recommend it, or China enough. 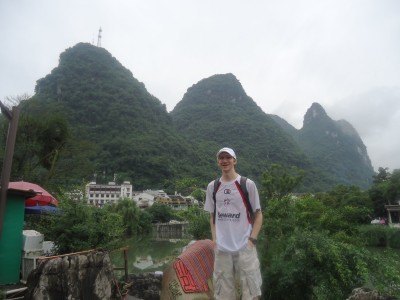 Here are some videos from our time backpacking in Yangshuo, it also has memories of being the place where I filmed my 5000th Travel Video for my YouTube channel:

3 thoughts on “Backpacking in China: Top 5 Things to Do in Yangshuo, Guangxi”