How To Buy Backpacking Centurion – Volume 2 – Lands Down Under on Amazon. My ongoing Backpacking Centurion Series is being released in four volumes. Two are available now, one is one its way and the fourth volume (The Black Volume) will take a bit longer, Volume 2 has been available in the USA, Canada and Poland since 27th December 2020. From 11th February 2021, it is available globally to order. This volume is more mature and more extreme than Volume 1. Volume 1 feels like an introduction to my journeys, it feels like the kid’s play. Volume 2 is when the big time travels started to dominate my life.

Sadly the pandemic of 2019 has also delayed the release of Volume 2, but then again I should blame myself because –

You can buy Volume 2 “Lands Down Under” here –

Chapters in the book, “Lands Down Under” 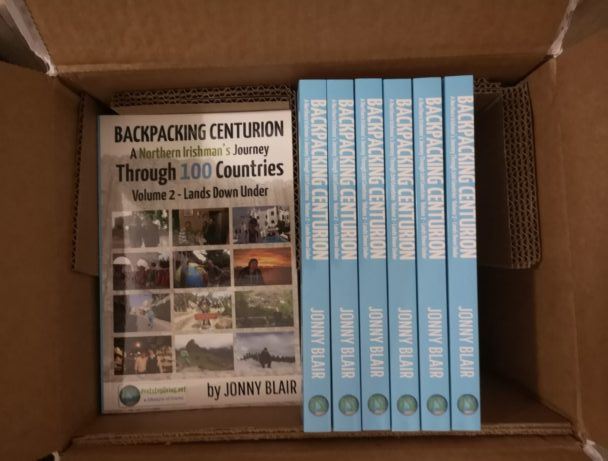 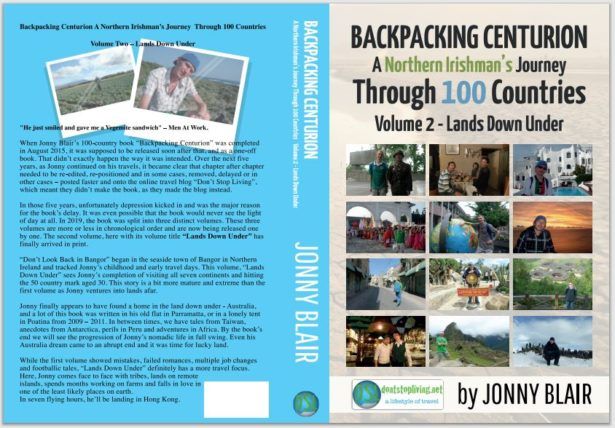 About the book, “Lands Down Under”

“She just smiled and gave me a Vegemite sandwich” – Men At Work.

When Jonny Blair’s 100-country book “Backpacking Centurion” was completed in August 2015, it was supposed to be released soon after that, and as a one-off book. That didn’t exactly happen the way it was intended. Over the next five years, as Jonny continued on his travels, it became clear that chapter after chapter needed to be re-edited, re-positioned and in some cases, removed, delayed or in other cases – posted faster and onto the online travel blog “Don’t Stop Living”, which meant they didn’t make the book because they made the blog instead.

In those five years, unfortunately depression kicked in and was the major reason for the book’s delay. It was even possible that the book would never see the light of day at all. In 2019, the book was split into three distinct volumes. These three volumes are more or less in chronological order and are now being released one by one. The second volume, here with its volume title “Lands Down Under” has finally arrived in print.

Volume 1’s “Don’t Look Back in Bangor” began in the seaside town of Bangor in Northern Ireland and tracked Jonny’s childhood and early travel days. This volume, “Lands Down Under” sees Jonny’s completion of visiting all seven continents and hitting the 50 country mark aged 30. This story is a bit more mature and extreme than the first volume as Jonny ventures into lands afar.

Jonny finally appears to have found a home in the land down under – Australia, and a lot of this book was written in his old flat in Parramatta, or in a lonely tent in Poatina from 2009 – 2011. In between times, we have tales from Taiwan, anecdotes from Antarctica, perils in Peru and adventures in Africa. By the book’s end we will see the progression of Jonny’s nomadic life in full swing. Even his Australia dream came to an abrupt end and it was time for lucky land.

While the first volume showed mistakes, failed romances, multiple job changes and footballic tales, “Lands Down Under” definitely has a more travel focus. Here, Jonny comes face to face with tribes, lands on remote islands, spends months working on farms and falls in love in one of the least likely places on earth.

In seven flying hours, he’ll be landing in Hong Kong. 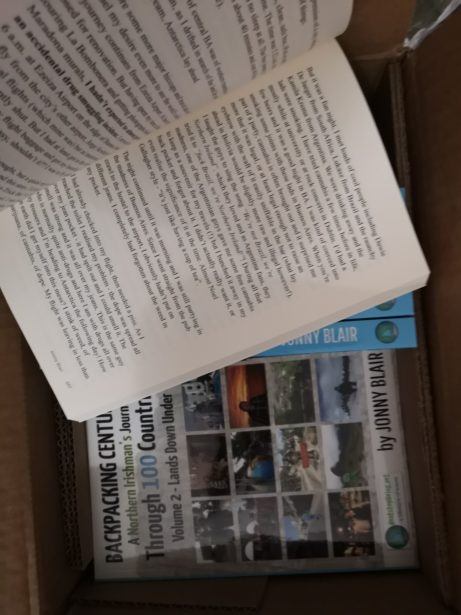