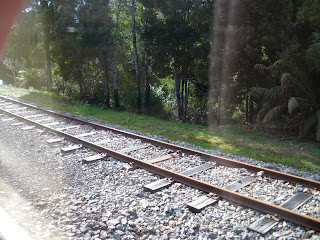 So I left behind the remote mining village of Lynchford, for this lifetime at least. This is where the train tracks got steeper and became a railway incline, as part of the famous “rack and pinion” system. I had already been on the world’s steepest railway line, back in November 2010, at Katoomba in New South Wales (ironically also the location of a mine – coal this time and not copper). 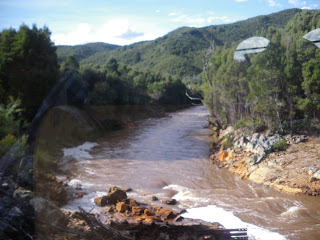 This railway line gets pretty steep, starting at a 1/40 incline (this means it rises 1 metre every 40 metres) then up to a 1/16 incline. The steepest in Australia is a 1/12, so it’s pretty steep, and the train slows down a bit, which gives you a chance to enjoy the rainforest. 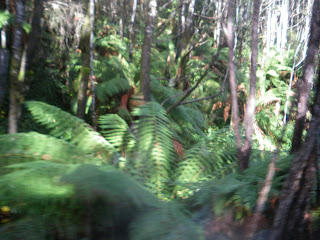 Another fact is told to us by Amy our guide, that this is the oldest rainforest in the world, at 135 million years old. How they can prove that I have no idea, but we take her word for it! The trees get closer and closer together and the rainforest gets thicker. This custom built railway track took some work. 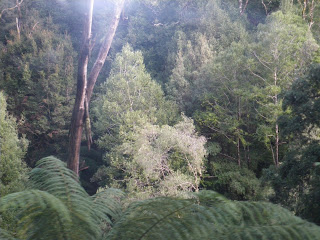 Trees had to be felled and a track through the forest had to be dug. You can start to smell the steam a lot at this point too, the train is using more fuel to get up this steep section. It’s 3 and a half storeys high, up to our peak, and lunchtime stop, which will be at Rinadeena. 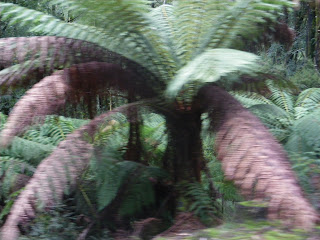 The track up was steep and we were given information about the leaves on the trees, Sassafras Trees. Apparently if you chew them they make you numb. Also they made a beer from the moisture in the leaves and called it “Tangle Foot”, it makes you drunk despite having NO ALCOHOL in it. 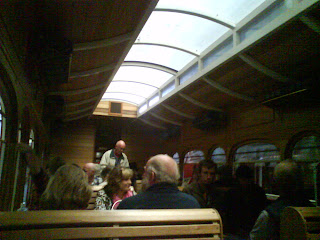 I spoke briefly to the guy next to me – he was travelling with four others, his family. They were from New South Wales, a town called Orange. 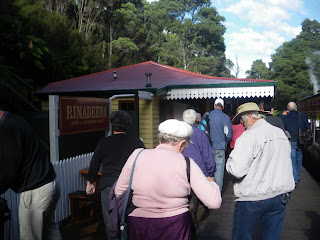 Very soon we had reached our peak, at the tranquil rainforest mountain village stop of Rinadeena. 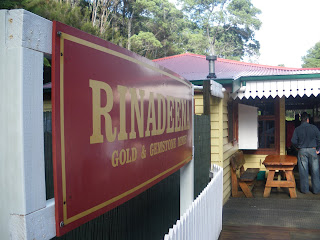 It was most sublime. We were told to queue up for our food, we had each a lunch token (it was included in the price) and inside the station itself, was a wooden cabin. It wasn’t so much a time warp, more of a reminder that it took people a lot of work to make this railway, and lunch at the top of a mountainaous area is a luxury rather than a neccesity. I was very much looking forward to the lunch. 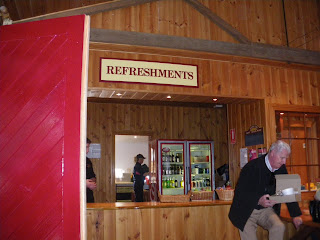 It was all well organised, neat and tidy. There wasn’t even a long queue. Everybody was served instantly. 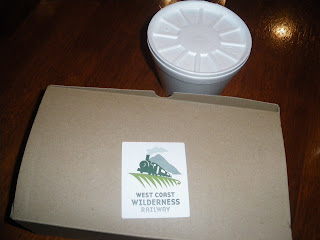 We all picked up a brown box which was our lunch. I sat down beside a couple who were also in the same carriage as me. Just the three of us at one table. To lunch I had also brung a tin of XXXX Gold Beer, which I had been given as a gift by Joe Cook and Rebecca on my last day on the broccoli farm at Cressy. 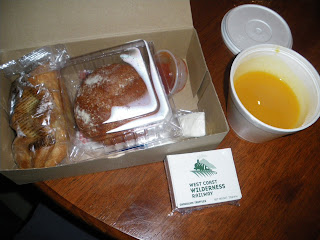 Lunch consisted of a brown box with a green and grey sticker (I managed to get 3 as souvenirs) bearing the words “West Coast Wilderness Railway”, the lunch was excellent: 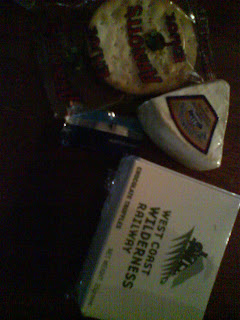 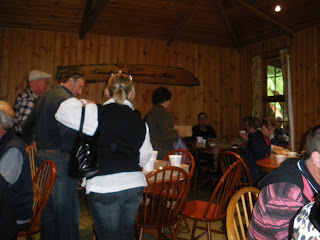 Over lunch I chatted to the couple on the table. I didn’t catch their names but they were living in Brisbane in Queensland, the guy was Australian and his wife was from British Columbia in Canada. 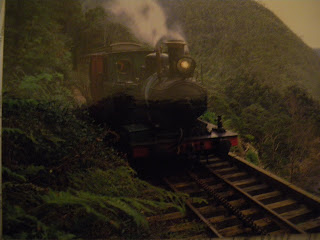 I bought a nice postcard in there for my Dad, it was kind of a kiosk/souvenir place all in one. Probably the highest shop in Tasmania, though I’m really not sure. 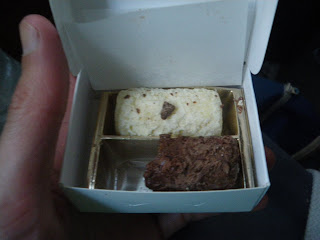 I couldn’t finish my lunch, it was so filling, so I had left the crackers, cheese and chocolates for afternoon snack. 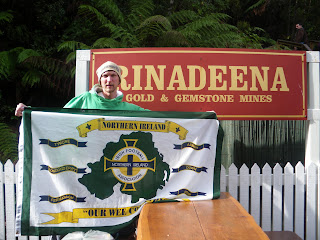 At Rinadeena I unveiled my Northern Ireland flag for a photo in front of a small crowd. 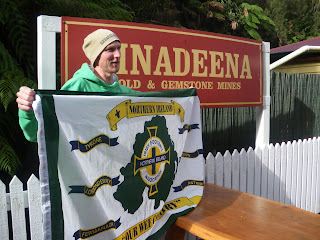 One of the guys wanted to make a short video of me there while I did that which was fun. It had emerged that myself, the Germans and the Canadian were the only non-Australians on the entire train journey. 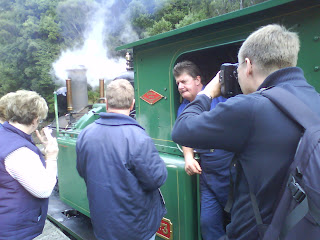 There wasn’t much else at Rinadeena except the train station itself and the kisok. Well, it’s pretty hard to have anything else there considering its so high up and surrounded by dense rainforest. The oldest rainforest in the world if you believe what you’re told on board… 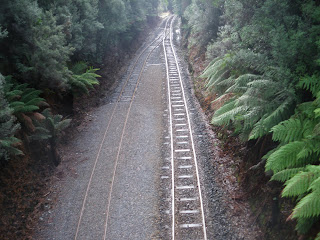 The whole point of Rinadeena of course was the gold and gemstone mines in the area, and from Rinadeena train station, these could be easily transported to Strahan and Queenstown. 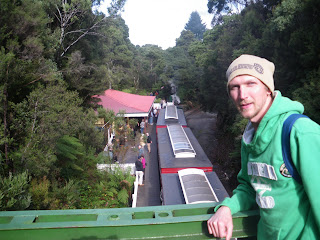 But I did make it to the top of the bridge for good views and photos. 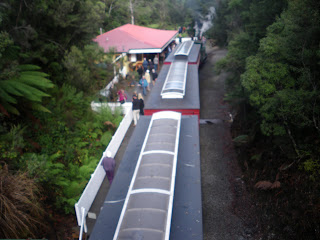 You can see from these photos exactly how big “Rinadeena” is. That is it! 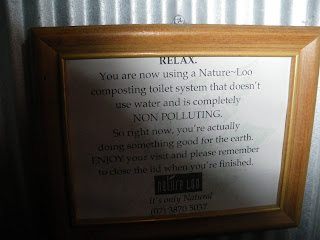 And there was an interesting combustible toilet system in place there. 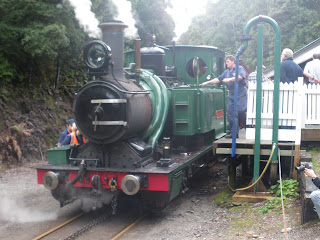 I also watched the staff refill the engine with water. 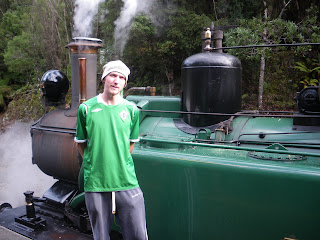 Soon the joyous lunch stop at Rinadeena came to the close with the noise of the steam engine. It was all aboard and goodbye to the lovely Rinadeena. 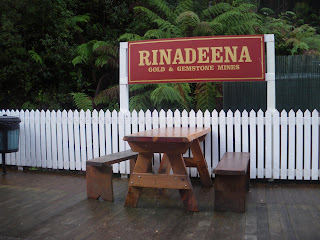 Which incidentally is the Aboriginal word for Raindrop.
Travelled From – Lynchford (Mountain Mining Village) to Rinadeena (Our peak, and the highest train station in Tasmania)
Transport Used – John Lyell No. 3 Locomotive Steam Train
Distance Travelled – 5.1 kilometres
Highlights – Leaving Lynchford, The Steep Climb, The trees getting thicker and thicker as we rise, Arrival at Rinadeena, the view from the bridge at Rinadeena, Lunch at Rinadeena, chatting over lunch, leaving Rinadeena and beginning our descent back down
Nationalities Met – Australian, Canadian
Time Period – 12.23 pm – 1.13 pm
Key Song –
RINADEENAS (RAINDROPS) KEEP FALLING ON MY HEAD by Burt Bacharach (from the film Butch Cassidy and The Sundance Kid):
THE STEEP CLIMB TO RINADEENA:
LUNCH AT RINADEENA:
FILLING UP WITH WATER AT RINADEENA:
Join 15,017 Monthly Readers! If you enjoyed this article and LOVE travel and SAVING money, get e-mail updates from Don’t Stop Living – a lifestyle of travel! (It’s Free) 😉 Jonny