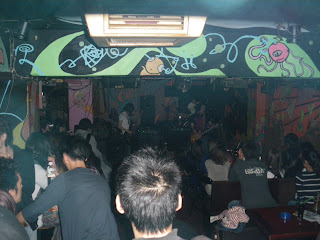 A Night Out in Taipei, Taiwan: Watching Rock Music in the Underworld

On my last weekend in Taiwan, I ended up in the capital city of Taipei. We had spent the full day sightseeing (and also went to the thermal spas) and returned to our hostel for the night out. Jenny had gone back home after the sightseeing, so there was just me and Neil for the night out. In the hostel, we got showered and changed and I sorted out my bag and used the internet very quickly. It was about 9 pm, and even if we were tired we had to rock it up in Taipei – it would be the last night I’d see Neil for quite some time, and my last proper night out in Taiwan. Taiwan had been a truly amazing experience and the night out began by dressing it up in the hostel – excellent hostel on the 13th floor of a skyscraper opposite Taipei train station. 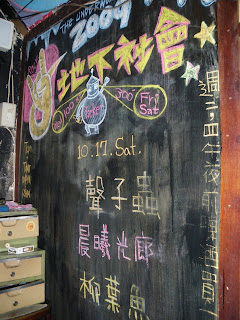 It was again through Taiwan’s “English Newspaper” – The Taipei Times that we found out about a live music venue in Taipei, which had 3 bands on for the entry price of 300 NT Dollars, which included a free drink, so Neil and I decided to go. It was only a few stops down on the Taipei Metro system, and then a bit of a walk to find 45 Shida Road. At first it was hard to spot the venue, but as it was a dingy rock joint, in true fashion it ended up being a narrow corridor and steps down to a table – the entry point, with the underground bar, named “The Underworld” down the stairs. There were to be 3 bands playing live, as the newspaper stated. 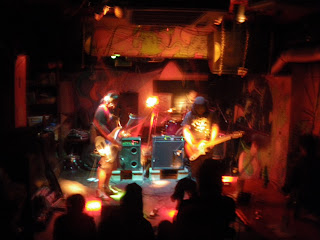 Once inside we grabbed a bottle each of the Taiwan Beer, which was included in the entry price. The place was small, compact, squashed and there were no seats. It reminded me of a venue in London (possibly The Barfly) where I once saw rock band “The Morning After Girls”, and another bar in London called St. Morritz Rock Club in Soho. 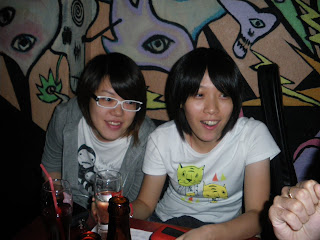 The first band were loud. They were a 3 piece and most of their stuff was instrumental rock – hardly any vocals – in between songs the singer would speak coherently to the audience, but all I could make out from the Mandarin was “Xie Xie”, which is Thankyou! During their set, Neil and I kneeled down at the front as there was no room to stand anywhere, and all the seats and tables were took. 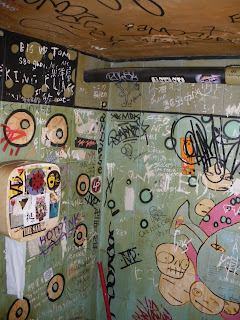 The toilets in the venue were pretty random – one for male and female, a door that opened to the entire bar (and was sandwiched into a tight corner) and it was full of random graffitti and art, so cool I snapped it, photo to the left.
Eventually after this first band, there was a brief interlude and a couple got up and left, meaning we could have their seats. We had another Taiwan Beer (a green bottle with white and green label – not bad). We commented on how instrumental the first band were, and that they lacked a vocalist or some decent lyrics! According to the newspaper, we could make out the band’s name to be “Bugs Of Phonon.” The next band up was “The Capelin”, as it said in the newspaper. There were also a 3 piece, featuring 2 females, which was great. They really rocked, and had fantastic basslines. The only thing they missed was again the vocals and some decent lyrics. The vocals just were not prominent enough, but the music won us over anyhow. 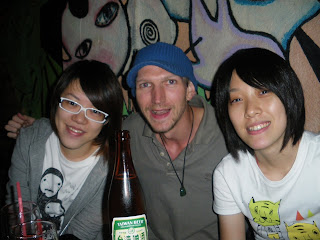 Straight after the Capelin finished, they came over and sat beside us. They spoke a bit of English but mainly they spoke to Neil in Chinese. They were really friendly. I chatted and got in a few photos with them. Plus I had already videoed one of their songs and then videoed us talking to them for a bit. It was a pretty fun venue. We showed them the newspaper article and they were very surprised and happy to see their name mentioned in there – so Neil gave them the article to keep. The lead singer called himself “Own” in English – which was a new name on me. They also gave us their “MySpace” details. That was our brief encounter with grunge band The Capelin over. Onto the final act… 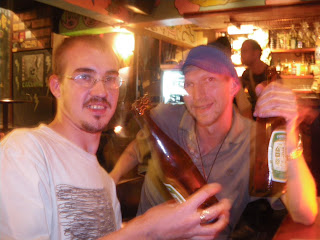 They were called “Sun of Morning” in their English translation and they had the most vocals of all the bands, yet I wasn’t quite so keen on their music. I liked the band name and the sentiment more than the actual songs, but the rock night lasted about 2.5 hours, so we naturally stayed till their set was over, just after midnight.
It was a great random rock music night, one which I won’t forget. But the night wasn’t actually over yet. Opposite the street were two more bars, one of them clearly a sports bar – the other a swanky restaurant with a bar. As it was Saturday, we had held hopes of watching an English Premier League match in there, but once we got in all they had was baseball from the USA and music videos. But sadly neither bar had them, though we had a beer in each (including Belgian Blueberry Beer) before heading back to the hostel, for what would be my final sleep in Taiwan.
Bars Visited – The Underworld, Swanky Taipei Restaurant, The Roxy
Bands Seen – The Capelin, Sun of Morning, Bugs of Phonon
Cost of evening – £15 all in (including £6 entry and free beer to Underworld)
Nationalities Met – Taiwanese, German.
THE CAPELIN LIVE AT THE UNDERWORLD, TAIPEI:
THE CAPELIN INTERVIEW AT THE UNDERWORLD, TAIPEI:
Join 15,017 Monthly Readers! If you enjoyed this article and LOVE travel and SAVING money, get e-mail updates from Don’t Stop Living – a lifestyle of travel! (It’s Free) 😉 Jonny