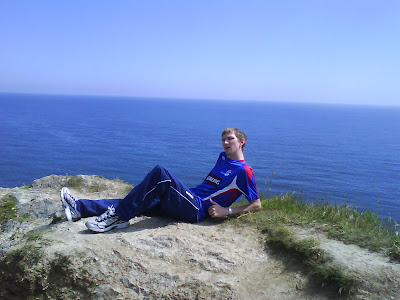 I spent a brave few years living in Dorset, England. Its a great wee place, very honest, very raw, but unfortunately less English and more commercial in parts than I’d like. I’ve spent over four years of my life living in Bournemouth, which is commercial, touristy and has an influx of foreigners, especially in summer. However just down the road there are much more beautiful and nice places to visit, such as Poole, Swanage, Wareham, Dorchester, Weymouth and…the gorgeous Durdle Door! Back in 2008 as the sun beat down and I had a Sunday morning and afternoon off work, I decided it would be a perfect time to go and visit Durdle Door, situated at Lulworth Cove overlooking the English Channel, and really just a 33 minute drive from my house at the time. 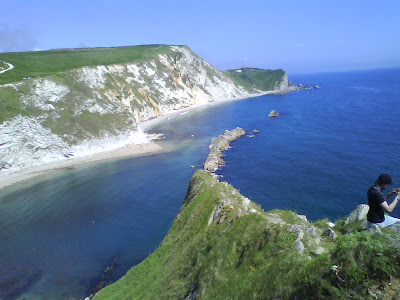 I used to live with budding journalism student Lewis Clarke, so Lewis joined me on the trip which we did in May 2008 on a hot Sunday. I took my car and we drove from our place at Ensbury Park in Bournemouth along the main carriageway to Poole and then headed on the main road to Dorchester and Weymouth. We turned off the main A35 and headed towards Wareham on the country roads. We stopped by Wareham for a photo by the “Wear Ham” sign post and then headed through the town centre of Wareham, later passing through a lovely country village (West Holme I believe) with traditional pubs and houses you’d expect in Dorset. The roads were winding and hilly and picturesque and every now and then we would get a glimpse of the sea over head. 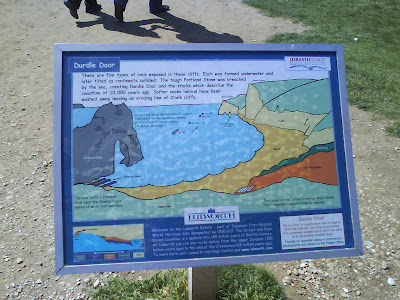 I was also aware of the Tank Museum at Bovington, a bit further inland in Dorset, but there was also an army base on the main road to Durdle Door, we passed the front entrance where a tank proudly sat, and Lewis and I decided we would go to Lulworth Cove and Durdle Door and stop at the army base for some photos on the way back. As we neared Lulworth Cove we saw a caravan park and the end of the commercial world, as we looked down on the English channel from the car park. We paid the £2 fee or whatever to park my car and then headed down the steep path to the sea. The sun was shining and there were a lot of people, mainly families there. There were no pubs, shops or restaurants, just a small ice cream shop, on our walk down the hill towards the two coves at West and East Lulworth, with the Durdle Door itself bang in the middle. 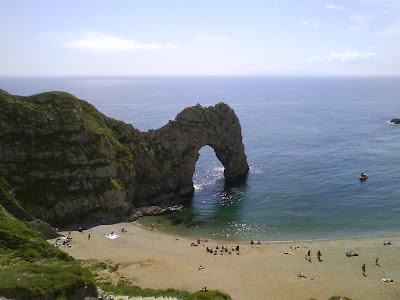 So what exactly is Durdle Door? Well its natural, its definitely not a door, no knobs and its not man made. Its basically an arch or rock, well natural limestone which sticks out from the mid point of the cove and into the water. There are steps to the bit at the top of the arch and there are two gorgeous beaches on either side. It is a beautiful part of the natural world on the Jurassic Coast, and Lewis and I both really enjoyed the view as we stood on the top of the first cove. As I often do, I brought my South of England Northern Ireland Supporters Club fleg with me for a few photos, posing for one overlooking the bay itself, and then after we had walked down and read the “National Trust Information Board”, I walked to the bottom of the steps and held the fleg up on the grassy bank with Durdle Door and the beach in the background. There were some pretty ladies in bikinis as an added feast for my Ulster eyes. 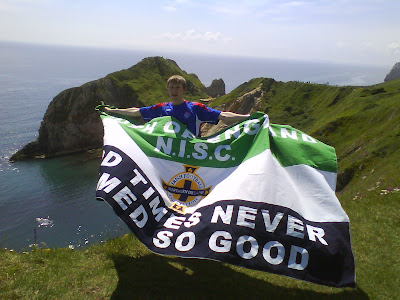 On the left on Durdle Door beyond the hill, there is the first cove known as “Man O War” Cove, so Lewis and I walked up the steps, the only man made part of it, to the top of Durdle Door so we could look down on both sides of the cove. Lewis had his video camera with him and as a journalism student he makes some documentaries, so he did a brief documentary of this one, which I have tried to put a link to below. Once at the top, we chilled out, enjoyed the spectacular views and then ventured as far over onto the ‘door’ itself as we felt was safe. I’m sure some people over the years must have commited suicide at such a spot. One slip on the walk, or even one gust of wind and you were a goner, down the side of the cliff never to return! 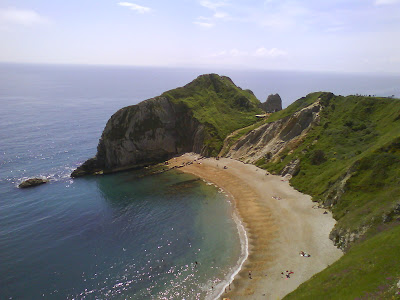 We walked back down, and then headed back up the hill to the car park which was steep enough on a hot day. At this point we stopped and Lewis got himself a 99 while I went for a bottle of Coca Cola. We walked back up to my car, again enjoying the views and the rare sunshine on a day with clear skies. At last I had been to and enjoyed Durdle Door. Once in the car we drove off and headed to the place where we spotted the army base and tank. I parked round the corner and we walked along the narrow roadside towards the front of the army base. It was quite enclosed and had barbed wire, but not as bad as somewhere in Northern Ireland such as palace barracks. 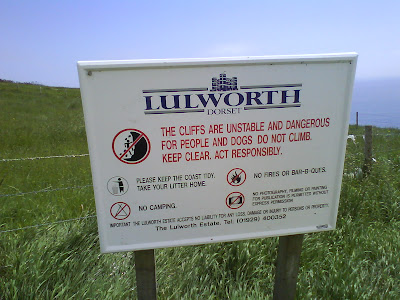 We enjoyed looking at the tank and posed for photos, again one with my supporters club fleg. I had to be back in work that night however in the Pavilion Theatre so soon we had to head home. We did ponder stopping in a country pub for a well needed pint on the way home, but sadly time was tight and I needed to be in work. It was a nice day out and a great sight to see. I’d recommend doing it! Go visit Durdle Door in Dorset. Its natural and comes with two nice beaches. 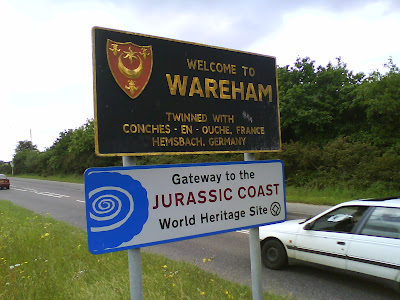 
– Several music videos have been filmed at Durdle Door, including parts of Tears for Fears’ Shout, Cliff Richard’s 1990 Christmas number one Saviour’s Day, Billy Ocean’s Loverboy and Bruce Dickinson’s Tears of the Dragon.
– The artwork inside the lyric booklet for Pink Floyd’s The Division Bell includes a scene photographed at Durdle Door.
– In Nanny McPhee, the children go for a picnic on the beach at Durdle Door.
– Scenes from the film Wilde (1997) starring Stephen Fry were shot here.
– Scenes from the film Far From The Madding Crowd (1967) were shot here
– On Google Earth the SOE NISC fleg appears in a photo on Durdle Door