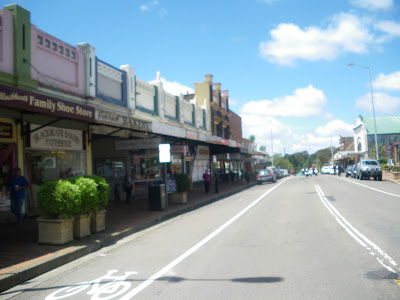 Blackheath was another planned day out in our last few days in The Blue Mountains. We had pretty much exhausted the entire area of a hat-trick of villages: Leura, Katoomba, Wentworthville. Next one down on the map was Blackheath. Living in Australia I have noticed so many different place names stolen from the UK. I used to live near a “Blackheath”, whilst living in Dartford, one of the train lines to London used to pass through it, and I once went out for a drink there with an Argentine lady. Here, in 2009 I found myself doing a day trip of trekking round the area known as Blackheath. 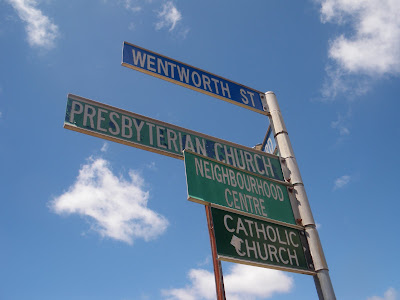 It began early. While staying in Blue Mountains Central Backpackers, and during my first 2 weeks in Australia, I had picked up and accumulated several coupons, discount vouchers and promotions. I hate the way so many people diss and ignore such vouchers, stating things such as “you’ll never need them”, “you’ll never use them”, “they won’t work” or “throw them away.” I just think to myself “your loss” when people tell me that. I have used coupons and vouchers all my life and always will. They are an added bonus, a money saver, and they make things more enjoyable. Maybe its something I get from my Mum. 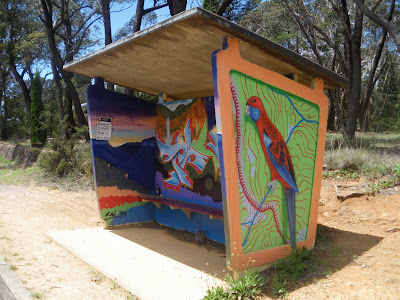 As a kid, we used to cut out coupons from cereal boxes, enter competitions, collect vouchers, collect bottle tops for free yo-yos, and even once while in Florida, USA my Mum and I both said the words “I’m a Bargain Lover” to till assistants at Bargain World just to get a free key ring, money off and perhaps once a free mug. Its really worth doing, and its free. One thing I always do is check the conditions of any offers or vouchers for valid until dates and any other conditions for example “must be bought with…” But on this occassion I had a voucher which simply stated “Free 20$ all day voucher on Trolleybuses in and around Katoomba as long as you have stayed 2 nights in Blue Mountains Central Backpackers.” Daniel and I had already stayed about 5 nights and so we were both eligible. What was even better was we used the voucher for two days in a row and on different types of Blue Mountains buses. It meant our day trip was Blackheath was an entirely FREE day. 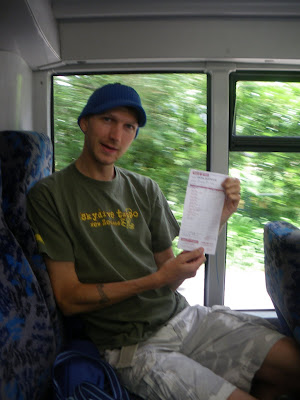 We boarded the blue and white Blackheath bus outside the Carrington Hotel on Katoomba Street. The driver checked our vouchers and said “No problem guys”, this is an aspect of Australian life I’ve come to love. The natural chilled out, friendly attitude. The bus journey to Blackheath wasn’t a long one, and we headed on the main carriageway. I think its called “The Western Highway”, and basically runs right through this part of the Blue Mountains. We got off the bus at the main centre of the village of Blackheath. This was where a T-junction met Govett’s Leap Road. The idea was to visit the four main “attractions” in the Blackheath part of the Blue Mountains. A row of shops lined both sides of Govett’s Leap Road, on one side the pub, Ivanhoe Hotel sat. This made me think of two things: 1. 1997 – 1998 and my time spent learning journalism at Belvoir in Belfast, as one of our locals and lunch time haunts was the Ivanhoe Inn. I had a few beers there with Keith Thompson and Jon Kerr in days gone by. 2. 2005 and 2009 – The Ivanhoe Inn in Belfast was where our family had eaten after my Great Granny Annie and my Granny Mary’s funerals. Names, places and memories never escape me. 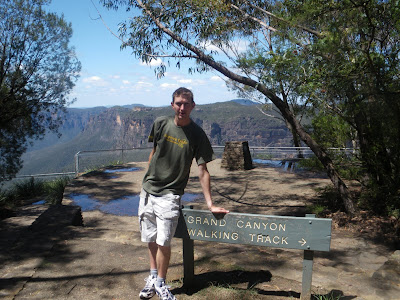 Anyhow we decided to do the following four attractions: Govett’s Leap, Evans Lookout, Pulpit Rock, Wind Eroded Caves. Evans Lookout would be a good one for Daniel, his surname being Evans. The others were all sights to see in this region of the Blue Mountains…Gorge Valley. Most of other sights and hikes we’d been on in the Blue Mountains were in Jamison Valley. There are just so many to see and do, you cannot do them all in a short space of time. So we walked on down Govett’s Leap Road, past Cleopatra Street and surprisingly again a Presbyterian Church and a Catholic Church, on the same road sign. I was thinking there is no way we could have that in Northern Ireland! There were also some well graffitied bus shelters, before we found an information centre at the top of the hill which led to Govett’s Leap, the highest falling waterfall in the Blue Mountains. In the information centre we picked up some maps and ideas about the region. It turns out that the information centre in Blackheath acts as the head office for the whole of the Blue Mountains region. 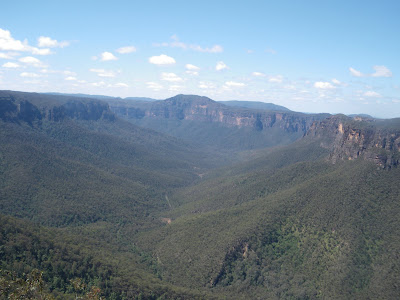 From there, we walked down the hill and began the trek to Evan’s Lookout. This was a short easy walk, but in the heat of the sun that day required a lot of water, and sweat was dripping off us. There were an abundance of insects in the air too, hanging round our ears and faces, even after I had put on tonnes of my “Boots” Insect Repellent, which doesn’t seem to kill, or even repel insects. This walk took us to yet another Bridal Veil Falls, a number of small rivers/streams and two lookout points. We saw a Japanese lady near one of the lookouts, walking slowly with a stick. 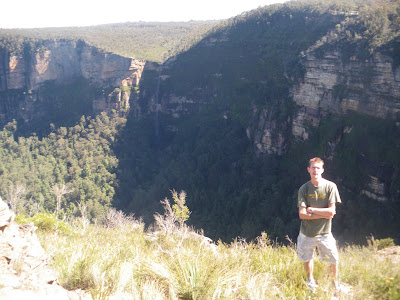 Soon we had reached the famous “Evans Lookout”, which stupidly didn’t even have an “Evans Lookout” signpost. It was the first and only lookout we had been to in the Blue Mountains without a signpost. How fucking annoying for Daniel, who wanted the photo by his lookout post. The words “Evans Lookout” were written on other signs nearby, but never on their own. It was a quick 10 minute stop there to enjoy the view and laugh at the fact that there was a sign saying “Grand Canyon”, hardly anything as spectacular as the one in the USA. In fact the track was even closed for 6 months due to restoration work in the Neates Glen area, not due to re=open until January 2010. The view from Evans Lookout was a good one though, right into Gorge Valley, which was mainly trees. 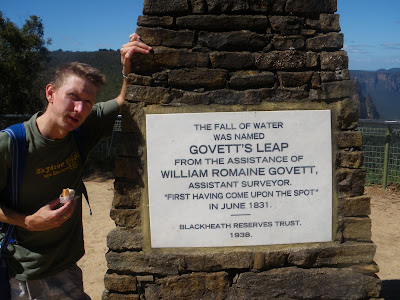 After this we walked back towards Govett’s Leap, along the same path. We lapped 3 backpackers who had been on our bus earlier, and we also lapped again the Japanese lady. We wondered what she was doing there. In the time we had gone to Evan’s Lookout and back, she had only walked around 400 metres! Anyway next idea was to see Govett’s Leap itself, find out about it and then head to Wind Eroded Caves and Pulpit Rock. At Govett’s Leap, we found the marker stone which had details on it. It read: “This fall of water was named ‘Govett’s Leap’ from the assistance of William Romaine Govett, Assistance of William Romaine Govett, Assistant Surveyor, ‘First Having Come Upon The Spot’ in June 1831. Blackheath Reserves Trust. 1938.” We looked out to our right and saw the waterfall, pretty, slight and high it is the highest fall of water in the Blue Mountains, though by no means the biggest. 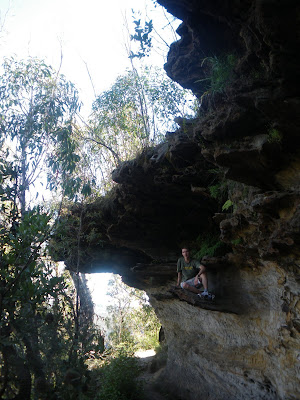 From Govett’s Leap to the Wind Eroded Caves was listed as a 6 hour return, so we did a bit of sussing these “caves” out beforehand. We had already been duped in Australia manys a time by the foolish titles Australia give to their locations: Ruined Castle was not a ruined castle; Golden Stairs were neither golden nor stairs. We found out from the tourist information office near Govett’s Leap that in fact they were just “cliff overhangs” rather than “caves”, and that the only proper caves in the Blue Mountains area were the Jenolan Caves (which we plan to go to at some point, though its dear – something like 60 Dollars for a return bus to it, then 35 Dollars entry). So on that note, we decided to do the trek round the cove to Pulpit Rock and see if we could be bothered walking all the way round just to see some “overhangs” disguised to tourists as caves! We saw another snake on this trek, a black tiger snake, similar to the few I’d already seen. 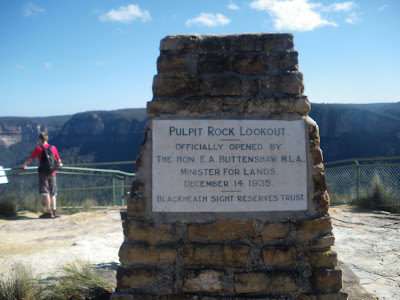 The trek down towards Pulpit Rock was an easy one, even in the heat. On the way we actually saw some of the “caves” or “overhangs” and Dan and I climbed onto a ledge in one of them. Pulpit Rock is basically just a rock at the end of the cliff edge. The rock is noticeable all the way round the trek, in gorge valley, and it fools you. You always think you’re getting closer to the rock and then it goes inwards again and twists back out. Once at the rock, it was a decent place to look out at the valley, and we could look back and see how far we had walked that day. 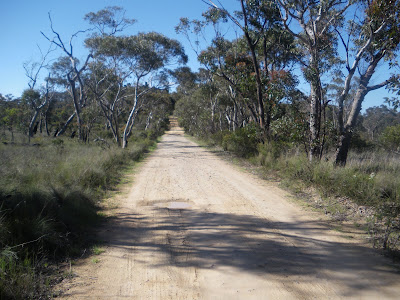 After this we had hoped to catch the last bus into the town centre of Blackheath, where we would take a walk round and see what the town had to offer. But sadly it didn’t look like we’d make it. The bus left from a place called Robb Avenue, which was a mammoth walk up a hill which was basically a wide, untarmacked road. The long and winding road…I called it. We even thought we had gone the wrong way at one point. There were no sign posts for at least half and hour. Robb Avenue was the street off the main road, Hat Hill Road. We checked with a guy out with his son on a motorbike and he confirmed we were going the right way. The last bus from Blackheath to Katoomba was at 18.16 pm so we didn’t want to miss it, since we had a free ticket and the train would charge around 5 Dollars. 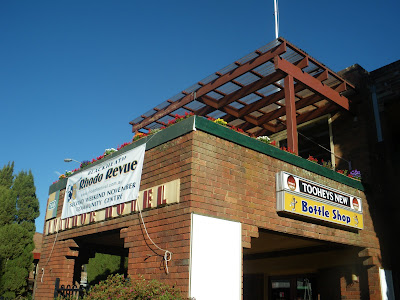 Once we finally reached the top of Hat Hill Road, it was a quarter to six. We sussed out the bus stop, which was opposite the Ivanhoe Hotel. In the time to kill we had a beer while we waited. That 4 Dollars was the only thing we spent all day! I had a VB Beer in there and then our bus arrived and took us back to right outside the hostel (bus drivers here are so nice). After some excellent lean spaghetti bolognese for dinner, we watched Falkirk gain a 3-3 draw with Celtic (to my amusement) in a Scottish League game randomly televised in the hostel. Blackheath had been added to our list.
Where? – Blackheath, Blue Mountains, New South Wales, Australia
Transport – Bus only
Sights – Two Churches, Pretty Bus Shelters, Pulpit Rock, Evans Lookout, Cliff Overhangs, Govett’s Leap, The Grand Canyon Entrance, Gorge Valley
Beer – VB (Victoria Bitter)
Pub – The Ivanhoe Hotel
Song – The Beatles – The Long And Winding Road
KATOOMBA – BLACKHEATH BUS:
PULPIT ROCK FROM GOVETT’S LEAP:
GOVETT’S LEAP TO EVANS LOOKOUT
GOVETT’S LEAP, GORGE VALLEY VIDEO 1:
GOVETT’S LEAP, GORGE VALLEY VIDEO 2:
TREK TO PULPIT ROCK:
VIEW FROM PULPIT ROCK:
Join 15,017 Monthly Readers! If you enjoyed this article and LOVE travel and SAVING money, get e-mail updates from Don’t Stop Living – a lifestyle of travel! (It’s Free) 😉 Jonny