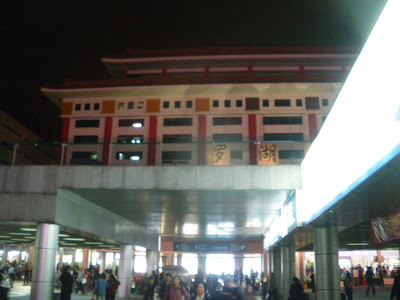 The joys of night trains continues. I love them. This one was organised by my girlfriend Panny as we planned a weekend in China in March this year. We arrived in Shenzhen after crossing the border into China from Hong Kong and were booked on the 21.23 pm night train north east to Yongding in China. 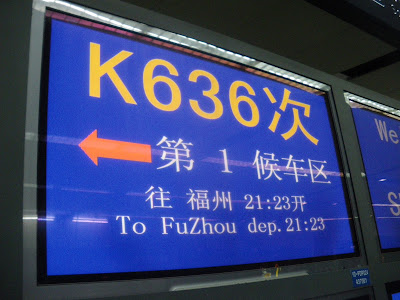 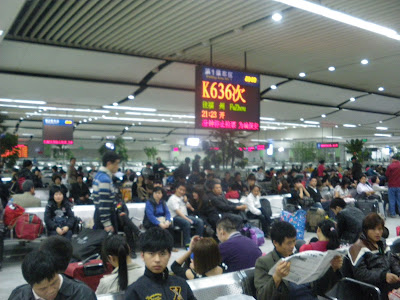 Busy waiting lounge for K636. The joy of being the only foreigner/Gwhy Low in the train station. 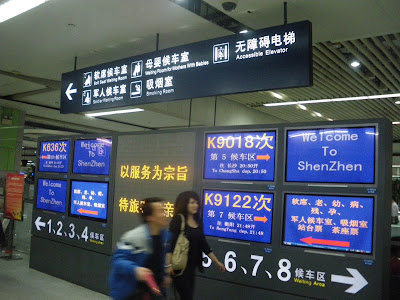 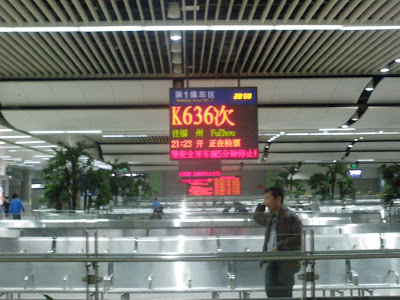 Last call for our night train north east to Yongding. 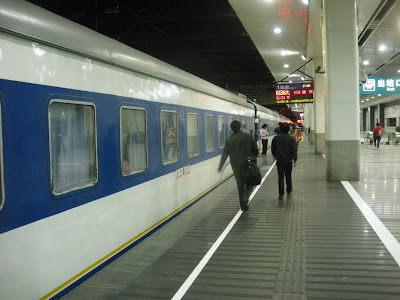 Basic and blue and white – our night train before leaving Shenzhen. 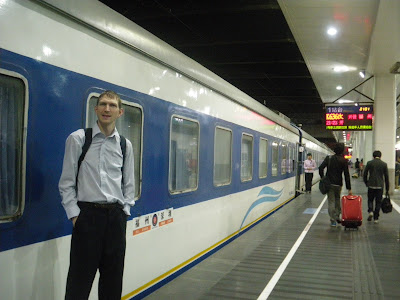 Panny and I had both just finished work hence the attire and the need for a relaxing night train. Incidentally these are some of the first proper photos of me in China for FIVE YEARS. Despite visiting Hong Kong and Taiwan, I class them both as separate countries given their political systems, own currencies, own borders, separate visa controls, national flags and of course own football teams. So they don’t count. Neither to airport visits to Beijing twice and Guangzhou! 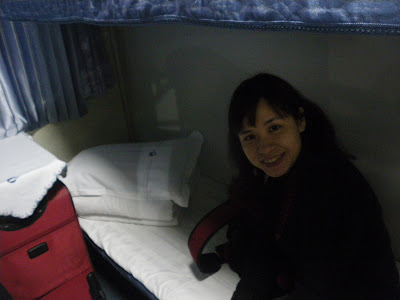 Panny on her bed for the night. She was bottom bunk. I always prefer one of the top bunks. There were 3 bunks. 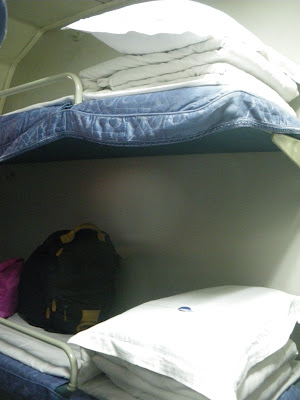 The top two bunks. I was the middle bunk. Panny down below. 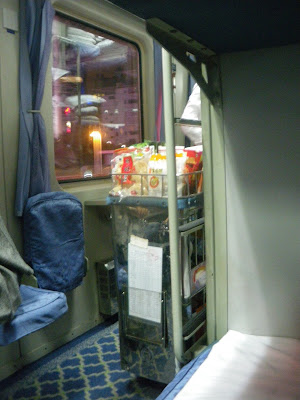 It’s the life. Being served by a trolley. Food and drinks. Having said that, Panny and I are true budgeters. I already had a COLD Guinness and Polar Ice beer in my bag as well as biscuits and chocolate. We also had water and orange juice with us, so no need to buy anything. 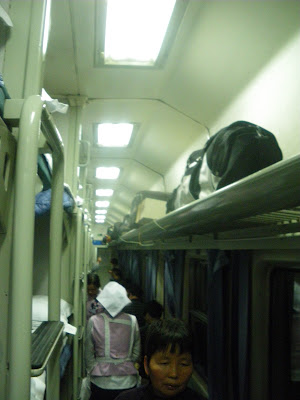 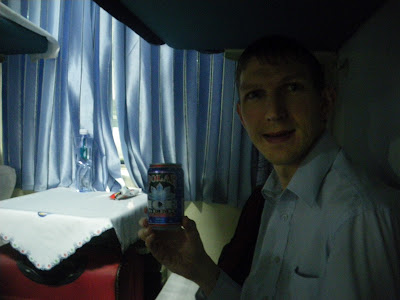 Enjoying my cold Polar Ice beer as our train headed out of Shenzhen. 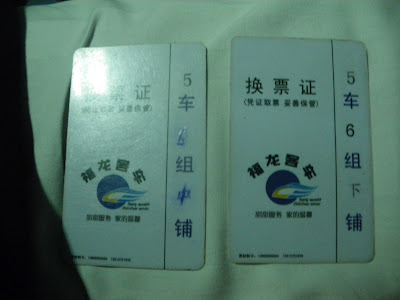 Our plastic berth tickets for our beds. Not everyone pays for a bed you see. When you exit the train you swap these for your ticket again. 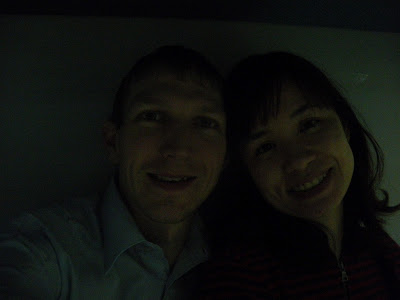 Panny and I on the night train. We left Shenzhen just after 21.23, so almost on time. 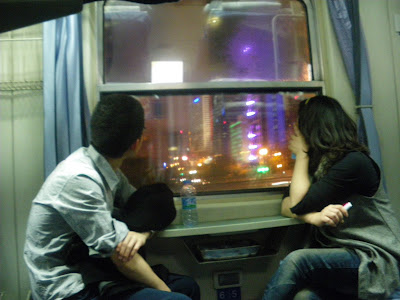 The couple relaxing across from us – they enjoyed the view of Shenzhen, itself a massive city! 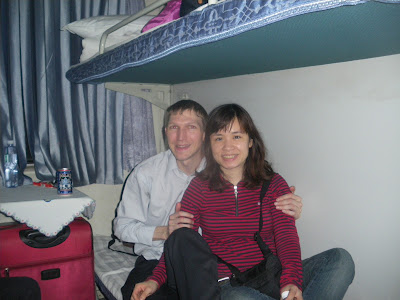 Panny and I relax on her bed. 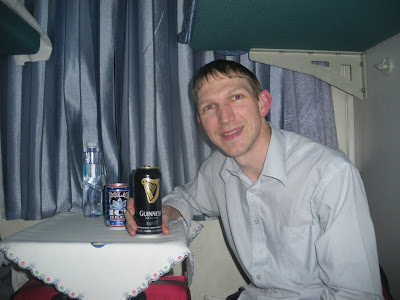 Just before bed I had a Guinness and enjoyed the bright lights of Shenzhen from my window. The bottom two bunks have a window view, the top one not. 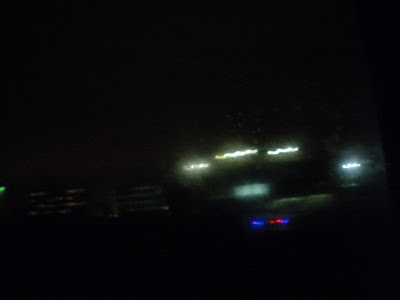 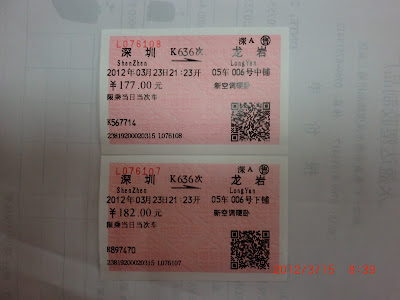 Our train tickets which say Shen Zhen to Long Yan. That was the route we were on, but we were due to get off around 5am in Yong Ding, just south of Long Yan. 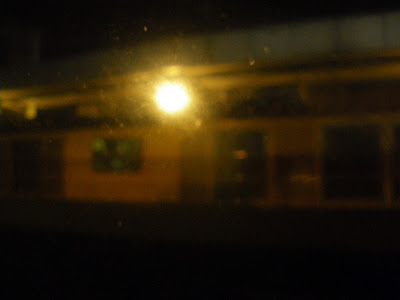 I was in bed and asleep before midnight and awoke a few times as we had 3 or 4 night time stops, took this photo at one of them, but it was so dark I have no idea what station that is. I was listening to Neil Finn music on my iPod. First time I’d listened to his solo stuff in years. Amazing! 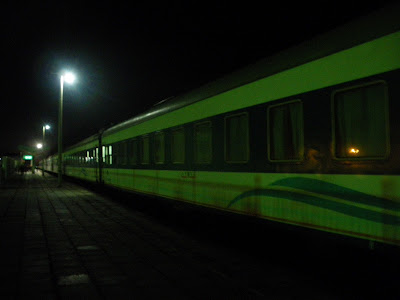 We both slept pretty well but Panny was more astute and aware of the time we would need to get off. I had reckoned around 5am, but she woke me at 4.50 am to say we were here. Quickly put on my socks and shoes and grabbed my bag and we had arrived! In the above pre- sunrise darkness of Yongding! Panny had arranged for a local driver to pick us up there and take us to the hostel – a Fujian style building in a village called Taxia. The building was called Qing De Lou building and in a place called Ta Pa Tsune (at least that’s how I’d write it in English). It was time to change, recharge and enjoy the Fujian province of China!
From – Shenzhen
To – Yongding
Via – Meizhou
Transport Used – Night Train, then a hired driver in his car (cheaper than a taxi)
Strange Currencies – Chinese Yuan (also called RMB and Renminbi)
Nationalities Met – Chinese
Price of Train Ticket – 185 RMB (Yuan)
Key Song –
NEIL FINN – TRY WHISTLING THIS:
My Videos –
IN SHENZHEN BY THE TRAIN STATION:
ABOUT TO BOARD THE TRAIN FROM SHENZHEN TO YONGDING:
PANNY AND I ON OUR NIGHT TRAIN:
LEAVING SHENZHEN STATION ON THE NIGHT TRAIN:
SHENZHEN SUBURBS AT NIGHT FROM THE NIGHT TRAIN:
CHINESE COUNTRYSIDE FROM NIGHT TRAIN:
ARRIVAL IN YONGDING AT 4.50 AM, FUJIAN, CHINA:
CAR RIDE FROM YONGDING TRAIN STATION TO QING DE LOU HOSTEL IN TAXIA VILLAGE, FUJIAN, CHINA:
Join 15,017 Monthly Readers! If you enjoyed this article and LOVE travel and SAVING money, get e-mail updates from Don’t Stop Living – a lifestyle of travel! (It’s Free) 😉 Jonny