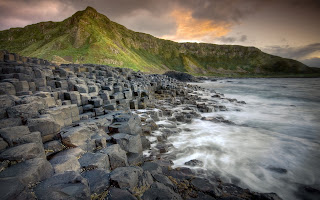 This is a truly SPECIAL PLACE. It just happens to be The Giants Causeway on the North Antrim Coast, in my home country and birthplace of Northern Ireland. It is a world famous tourist spot, and a place of uncommercial, natural, real beauty. Its name is simply The Giants Causeway. If you have never heard of it, I suggest you read on, find out about it, and on a spare day in your life, go and visit it. There are some beautiful places on planet earth you can see without spending a lot of money. 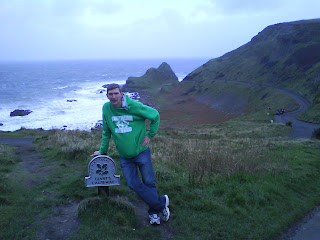 At this specific coastline (the North Antrim Coast) there are rock formations which are hexagonal in shape, almost all of them look to be man made, but they’re not! They were formed by nature after ancient volcanic eruptions, and have remained to this day. I must admit I am wick at science and quite how the very special rock formations happened is beyond me, but there are plenty of websites detailing it. Your trip there will be mellow, inspiring and hopefully peaceful. You will feel at ease with the world at The Giants Causeway. During the major troubles and violence in Northern Ireland, the place suffered from a lack of tourism, yet still is world renowned. I think I have been there 3 times myself, though cannot specifically recall when and where. As a child, my parents would always take us away to beautiful countryside and coastal locations on Sundays and on Summer Holidays. During the 1980s, I remember getting some ice cream before walking down the coastal path past inward cliffs and a wonderful cove, where on the next point, the rocks of the Giants Causeway meet the Atlantic Ocean. 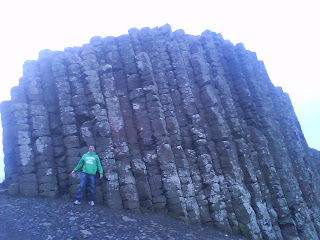 It is the beauty of the waves and the Atlantic Ocean, and the spray hitting against the rocks with the gaping coast that add to the beauty of the experience in my opinion. I have always went there with family. The first time was with Mum, Dad, Mark and Cathy. The second time the same. The most recent time, was November 2008, with my Dad, when I felt i had to go back and see it once again, as a mature (ish) adult. The third time was the best and most memorable and the photos that appear on here were taken last year on my visit. Its free to visit. Its owned by the National Trust and you simply walk down the hill. The only charge is the bus that you get there, the car parking (steep at £5 a stay, but worth it). There are also bus tours which cost money, but my advice is just drive there, pay the parking cost and walk down yourself, if you are able. 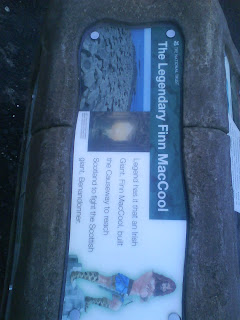 The busy peak months are obviously June – September as this is when Northern Ireland enjoys its best weather. The rain in Ireland doesn’t help pump up the tourist volume, but when something is this nice, weather shouldn’t matter. You can wear coats, gloves and scarves! The walk down to it takes you firstly from the top of a cliff face featuring The Causeway Hotel and the Tourist Information Centre. If you have the money, staying in the hotel would be a wonderful experience, and parking is also free. It overlooks the Atlantic Ocean and enjoys the sea breeze from the top of the cliff. Once you’ve past those, the Causeway Coastal path begins and you go past a cove or an enclave, where the Atlantic Waves crash fast upon the shore. There is a small beach there, which may be dangerous in rough weather, but you can venture down fairly close. 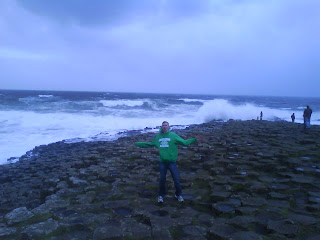 Once round the first alcove, it is a wide path with cliffside hills which gape down towards the rock formations. Before this, on your left is another small beach, plenty of pebbles and even seaweed. Seaweed is also eaten in Northern Ireland as a delicacy, believe it or not!! It is called “dulse” and can be eaten with fish or as part of a salad. I don’t eat it myself, but many Ulster folk do. Past the dulse and the small beach, you sea the rocks leading right over to where the waves hit. This is where the 40,000 adjacent rocks are. It is amazing and you won’t quite believe it. They are shaped hexagonally (that means they have 6 sides, almost equal). They are flat on top, and they fit together like a dream. Its a scene from an imaginary filim as you walk on them. Except its real. 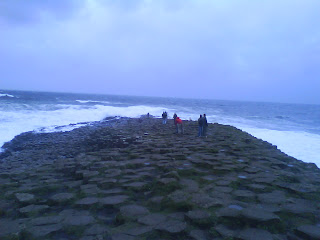 Watch out for the fierce winds and waves and don’t go too close to the sea. People have died here and further out, boats have sunk, including one of the last ships from the Spanish Armada. It is totally exposed, the nearest country directly north is Iceland. On a wet day, the rocks get slippy and they are not always manned. Enjoy sitting on the “seats” that have been formed, venture down and watch the Atlantic foam hit these unique rocks and get some photos while you think about the good things in life. Well, that’s what I did when I was there… 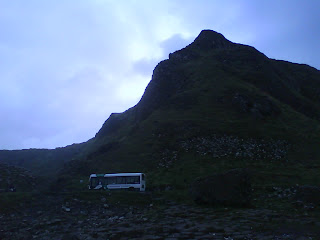 The rocks appear from nowhere and disappear just as quickly, as you dander further round the causeway coast, the rocks suddenly stop. Not before there are large prisms formed at the back end of the rock formations. These look to be formed through erosion and the coastline waves. Though apparently the volcanic explosion caused these shapes as well and nothing that man has done has changed it. 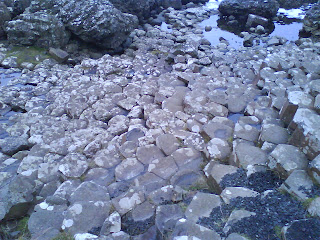 There are also some myths and legends as to how the rocks were formed. One mentions a mythical Irish Giant by the name of Finn McCoul, who built the rocks all the way to Scotland in order to fight his fellow giant from Scotland, Benandonner. Yet he didnt make it and so lay on the rocks disguised as his own son, and Benendonner turned round and walked away…I was told that story at primary school and though I never believe in myths, I kind of like it. There are some inspirational things like that for children, which stay with you until adulthood. This was one, and recently I saw Peter Pan (apntomime) again and it made me marvel at the joys of stories and myths from childhood. These help us smile through our bad days and believe a happy life is out there somewhere, somehow… 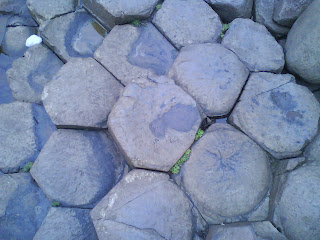 Presumably thats where the name “Giants Causeway” comes from. The word causeway is taken from a similar version of basalt formations in Scotland. 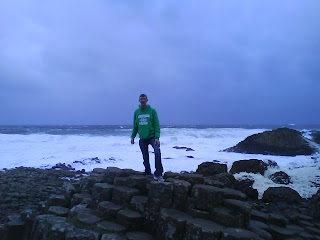 It is also quite strange that there are no settlements or towns or villages anywhere near the Giants Causeway. To memory, Portballintrae, Bushmills, Ballycastle and Dunseverick are the nearest settlements. They are all within 10 minutes or so drive, but it amplifies the amazement that the Giants Causeway is just there…in the middle of nowhere! Down narrow typical Northern Irish country roads, it just appears. I have been there in Autumn and Summer just to date, but will have to go sometime in Spring and especially in the cold of winter. Just for a different experience. ON different days, at different times, with varying tides, sunsets, weather and landscape, each day can be different for the views and experience of The Giants Causeway. If you search online for images/pictures of The Giants Causeway, you will find a host of varying images from different angles and from different times of the year. 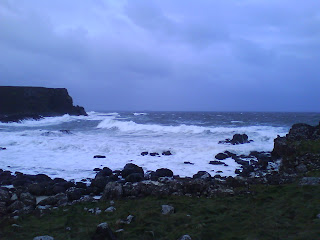 From the Giants Causeway Visitor Centre Official Site:
The Giant’s Causeway is a World Heritage site, National Nature Reserve and Northern Ireland’s premier tourist attraction. The site and 15 mile of footpaths along the Causeway Coastline are owned and maintained by the National Trust who work in close co-operation with Moyle District Council who manage the Visitor Centre and Car Park Facilities.

Moyle District Council’s Causeway Visitor Centre is open daily all year round and located on the cliff top 1 km from the site. The Centre is the ideal starting point for walks along the coastal and cliff top paths and provides an excellent range of visitor services. A 12-minute audio-visual presentation, with commentary available in 5 European languages, enables visitors to further explore the origins of the Giant’s Causeway through local folklore and scientific theory and highlights the many other attractions of the Causeway Coast and Glens of Antrim area. 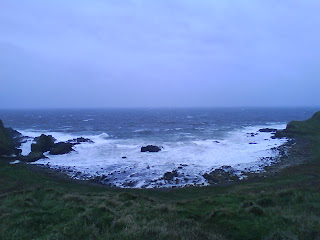 This is taken from Wikipedia:
The Giant’s Causeway (or Irish: Clochán na bhFómharach)[1] is an area of about 40,000 interlocking basalt columns, the result of an ancient volcanic eruption. It is located on the northeast coast of Ireland, about two miles (3 km) north of the town of Bushmills. It was declared a World Heritage Site by UNESCO in 1986, and a National Nature Reserve in 1987 by the Department of the Environment for Northern Ireland. In a 2005 poll of Radio Times readers, the Giant’s Causeway was named as the fourth greatest natural wonder in the United Kingdom. The tops of the columns form stepping stones that lead from the cliff foot and disappear under the sea. Most of the columns are hexagonal, although there are also some with four, five, seven and eight sides. The tallest are about 12 metres (36 ft) high, and the solidified lava in the cliffs is 28 metres thick in places.
The Giant’s Causeway is today owned and managed by the National Trust and it is the most popular tourist attraction in Northern Ireland. 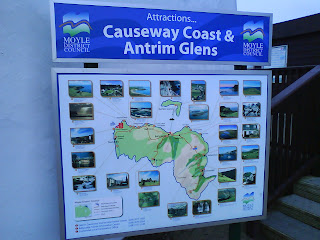 It is a truly beautiful and special experience, these photos do not do it justice. I look forward to going back there very soon and I want to take friends I have met to show them the beauty of my home land. It is a special place. 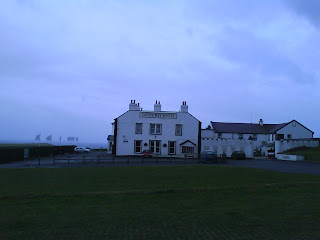 The Giant’s Causeway on Wikipedia:
http://en.wikipedia.org/wiki/Giant’s_Causeway