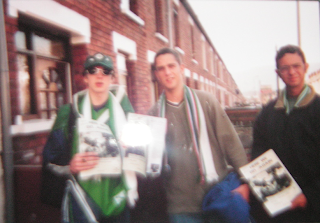 Northern Ireland’s support was pretty shit in the 1990s. That’s just the way things were. I attended at least one home match a year, and for the last 4 years of the decade, I didn’t miss one. I have fond memories of EVERY trip to Windsor Park to watch my beloved Norn Iron (win, lose or draw), and just before the millennium chimed into view, we hosted the world champions, France. It was an August Wednesday night. I was working at the time in Tesco in Connswater in East Belfast and I went with Gavin and Michael McClelland, plus my Dad, my brother Marko and Brian. We had previously lost 3-0 to Germany and scraped a 1-1 draw with Canada. However the highlight of the Lawrie McMenemy reign had come the previous May in Dublin, when a late Danny Griffin goal gave us a 1-0 win over the enemy of the Republic of Ireland. Many feared a battering when the stars of World Cup 98 came to town.

I stood with Michael and Gavin (as was the norm in them days) outside the Linfield shop and we sold what appeared to be the best ever ‘Here We Go…Again’, issue 6. We sold out that day, as thousands flocked to Windsor Park, for what was almost a sell out (though looking back at the video it was hardly close to that!). The world cup trophy itself was also in town and a lucky mascot got to carry it round the stadium that night. I was living in Dundonald at the time and had got a lift off my Dad. We used to stand there and yell “Norn Iron fanzines only a poun.” There was always a good bit of banter about and some characters. I remember I used to dress a bit silly in them days. On this ocassion I had silver sunglasses on, a green NI baseball cap with badges on it and a green and white fleg over my shoulder in Batman Cape style. Everyone seemed to be happy.

We sat in the North Stand Lower deck that night, and soon Northern Ireland were taking on the mighty France and holding their own. John McCarthy had a good game that night and almost gave us the lead at one point. I wasn’t used to seeing Northern Ireland take on teams like France. Before that, the best win I’d seen in person was a 2-0 victory over Romania in 1994. It looked as though we could get a draw. The night before the under 21s team inspired by an uncapped David Healy bate the French 3-1 at The Oval. For some reason I didn’t go to that game. Can’t remember why, as I seemed to go to a lot more Glentoran matches in those days. Anyhow inspired by Aaron Hughes and Steve Lomas, we matched the French for the most part until they stole a goal (through Las Landes I think) in the second half and we lost 1-0. I remember I had a quiet beer with my Dad as we watched the highlights on the TV when we got home. My kid brother Daniel was watching on TV live, and we promised to take him to one of the upcoming matches.

I was proud of the Ulstermen that night: