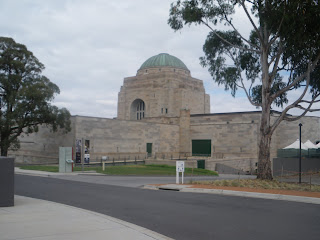 Backpacking in Australia: Visiting the Australian War Memorial in Canberra

You hear talk about it when you’re in Australia. People that hear you’ve been to Canberra will say “oh, did you go to the war memorial?”, so you’ve kind of got to go there, just so you can give a positive answer to those questions. But really when I first heard of a War Memorial in Canberra I assumed it was just some kind of monument or a park with a big memorial. Actually, it’s more of a museum than a memorial. But it’s pretty damn insightful. Yes, the history of the world at war is here, right up to recent day battles in Iraq and Afghanistan. And it ain’t just an Australian War Memorial, it represents the World at War. 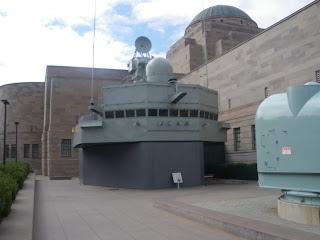 So on our big day of sightseeing in Canberra, it was decided we should spend a good few hours at the War Memorial. My mate from Canberra, Evan had kindly offered to drive us round the sights for the day, which meant we didn’t have to hire a car. Everything in Canberra is spread out, and public transport isn’t really an option, so it’s best to have a car, hire a car or know someone with a car. After a drive right to the top of Mount Ainslie, we were set for the War Memorial. 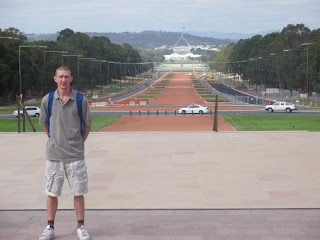 It’s easy to find in Canberra and well sign posted. From the symmetric Anzac Parade, up to the Parade Ground is a direct line straight up to the Australian War Memorial. This makes for a great photo at the War Memorial’s entrance, which I got took. The War Memorial is directly adjacent to Canberra’s Parliament area on the other side of Lake Burley Griffin. 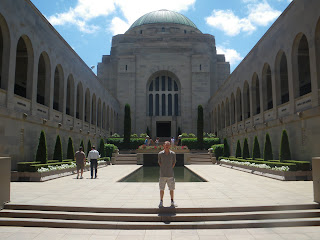 You can park on Treloar Crescent in one of two large car parks. It is a clean, tidy and modern building. The building itself is symmetric in shape also, with grey ish bricks and an arched dome at the top in bluey green. Canberra tends to be very clean and well looked after and the War Memorial is a fine example of this. The War Memorial is free to enter, but you are obliged to donate. I donated a few dollars, and also bought some postcards in the shop. 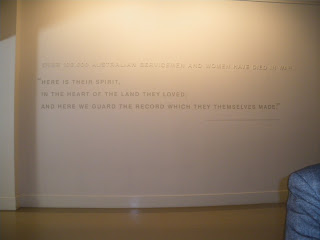 Once inside, you hand in your bags (if you have any) and are in the main entrance hall. You get a leaflet/guide to the Memorial, which is on two levels. When we were there there was a special “Love At War” section, in the Special Exhibitions Gallery, this section changes all the time though. From the main entrance, we heard that there was a guided tour beginning in just 5 minutes, but we wanted to walk round at our own pace and not be part of the tour. 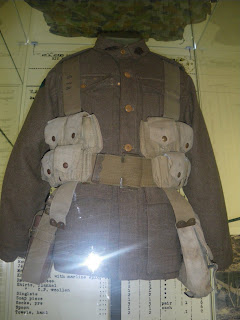 Before you even enter the start of the Memorial, you are hit by a fact written calmly on the wall: “Over 102,000 Australian Servicemen and Women have died in war.” A cruel and stinging reality to hit us before we enter, and of course the War Memorial is dedicated to all those people. A quote follows this fact, “Here is their spirit, in the heart of the land they loved, and here we guard the record which they themselves made.” It reminded me of a visit back in 2008 to The Somme Heritage Centre in Newtownards, Northern Ireland, more on the Somme later… 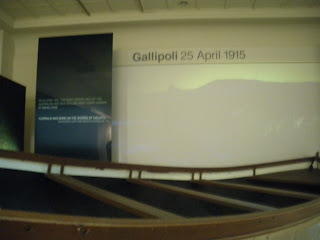 First up we went into the First World War section, obviously of great interest and significance. The main Australian commitment to the First World War was at Gallipoli in Turkey. I must have spent at least 40 minutes in that section alone, looking at the memorabilia, reading all about the Gallipoli battles and how the Australian War Base was actually in Northern Egypt. 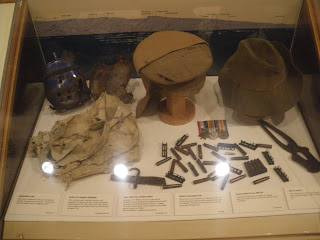 This part of the museum was excellent and very detailed. It gave day by day accounts of life there, had real life photos, reconstructed battlefields, letters and poems from those involved in the war and had a lot of memorabilia. They had actual war uniforms, on display almost 100 years after they were worn. The main attack at Gallipoli was the 25th April 1915. 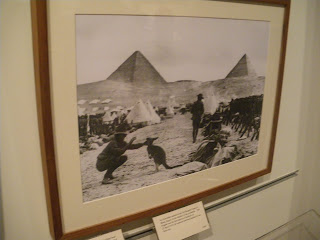 A few humorous moments added light hearted banter to the serious museum for the day, firstly was the sight of a “lucky kangaroo”, which the Aussies took to Egypt with them. A photo of the Kangaroo has the Egyptian Pyramids in the background. 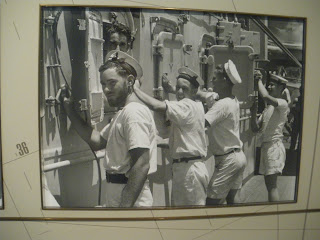 Secondly a photo of some of the Australian navy crew had what me and Daniel described as “Rooney’s Granda”, it was Wayne Rooney 100 years ago on a boat heading for war. The Gallipoli was a cruel campaign during the war which saw a large number of deaths. 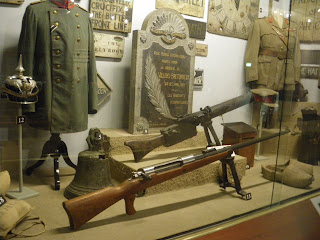 The following numbers made you stop and consider life for a second. In one small part of a large war, the following number of people from each country died: Australian – 8,709
New Zealanders – 2,701
Indians – 1,594
French – 9,874
British – 21,255
and on the opposition side 86,700 Turkish people died. Nearby there was also a section which mentioned the Battle of the Somme. I know from my history awareness, that this particular battle was a victory for men from my country, Northern Ireland. Back then, in June and July 1916, it was the 36th Ulster Division of the British Army which helped defeat the Germans at the Somme. You could literally spend all day in the First World War section alone, they had a massive collection of actual weapons used in the First World War. 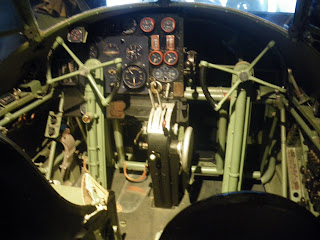 It was time to check out the Second World War section, which centred on Nazi Germany and the 6 year struggle to defeat one of the largest armies and political dictatorships in world history. I spent less time in that section, but saw that it led into a section for Fighter Planes and Second World War Aircraft. Actual planes used were in the massive hall. I hadn’t expected that! 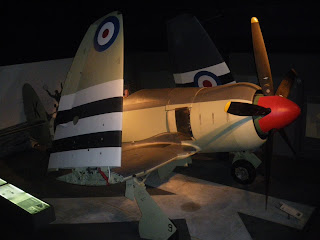 There were a lot of planes on display. You couldn’t actually go into any of them, but I took a few good photos, read all the information and then moved into a separate room to watch a video on the Japanese Kamikaze Pilots from the Second World War. All very insightful and informative. It was great to be getting history lessons again, and a photographic history of our beautiful world, constantly torn apart by man’s hate of his fellow man. 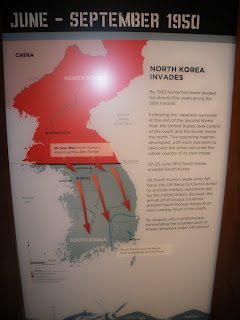 The final section of interest was basically for all the wars since 1945 (The Cold War, which I learnt a fair bit about on trips to Berlin; The Korean War; The Gulf War; Other Wars), we saw a documentary about Vietnam, which is somewhere I will have to visit someday to fully understand what actually happened, and the reason Saigon now calls itself proudly, Ho Chi Minh City. 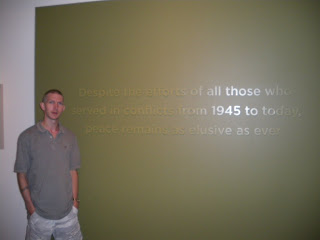 On the way out, another chilling quote brings it all down to earth. I stood quietly by the sign for a photo, “Despite the efforts of all those who served in conflicts from 1945 to today, peace remains as elusive as ever.” That kids is your quote… 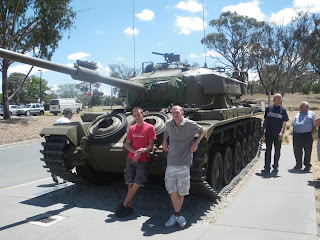 We posed for photos in the Atrium by the Roll of Honour and by a massive tank. We had all been impressed. An excellent War Memorial. A pity we had to kill each other to enable such a building of death commemoration to exist. That’s life, or that’s death.
(Notable “wars” un-mentioned are Northern Ireland’s troubles and the ongoing problems between the Israelites and Palestinians, but I guess because hardly any Australians were involved, it’s hardly surprising for the neglect. Yes Australians must have played some kind of role in the Cold War, it seems)
Who Went – Jonny Blair, Evan Tattam, Daniel Evans, Neil Macey
What Is It – The Australian War Memorial, Canberra
Quote – “It’s written in the starlight and every line on your palm. We’re fools to wage war on our brothers in arms” – Knopfler, 1985
AEROPLANES IN CANBERRA WAR MEMORIAL:
KEY SONG, U2 – PEACE ON EARTH:
GALLIPOLI:
HITLER:
NORTHERN IRELAND’S TROUBLES:
Join 15,017 Monthly Readers! If you enjoyed this article and LOVE travel and SAVING money, get e-mail updates from Don’t Stop Living – a lifestyle of travel! (It’s Free) 😉 Jonny

1 thought on “Backpacking in Australia: Visiting the Australian War Memorial in Canberra”