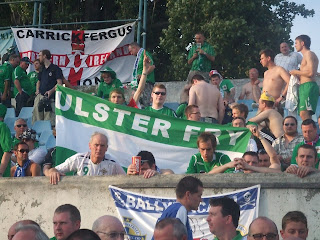 The trials and tribulations of football cause joy and disappointment in the face of friendship and bonding. Last year I ended up finally in Slovakia. I say finally, as I had done the Czech Republic, Poland, Austria and Belarus, but not Slovakia. I was booked on a two day trip to Bratislava and was looking forward to it for most of 2008. It was my first Northern Ireland away match for almost a year (in between I had missed Spain and Scotland) and I totally expected us to win, or at least get a point. I know I shouldn’t have been this optimistic, but the reasons were simple. Slovakia were on the down, we were on the up. We had a full team out, we had 2,000 fans there, their fans boycotted the match for the most part. We had almost qualified the time before for Euro 2008, they have never nearly qualified for anything. It was 3 points to be had out there. 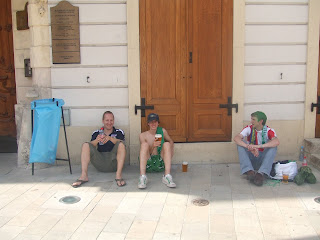 I’ve already mentioned the trip to Bratislava, from the Friday night to the Sunday night, as the city itself outshone its counterparts of Prague, Warsaw etc. as much more raw, vibrant and beautiful. Quiet reserved slovaks live there and they party loudly at night. We stayed in Downtown Backpackers in Panenska, near the Old Town and from there we met all the lads in the main square on match day afternoon. I think the kick off was early evening, but the sun was hot, the timings hard to work out, and the streets of Bratislava were a Northern Irish emerald green. It must be the only Northern Ireland match where I have not met up with or been photographed with opposition fans. You couldn’t find a Slovakia fan. Anywhere. Until we got into the stadium. Before the match day and the entire Green and White army being together, there was some very bad news – Northern Ireland fans had been majorly attacked by Slovakian thugs, totally unprovoked attack outside and inside a fake Irish pub called “The Dubliner” AVOID IT AT ALL COSTS if you’re in Bratislava. NI fans that tried to video the attack even had their phones and cameras stolen. It was a black moment in my history of watching NI away, I didn’t see the attack, and never went into that pub, but we all heard the story from every source we met in a green top, anyway that was all on the Friday… 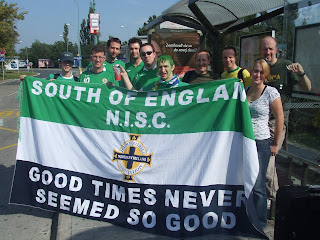 We drank beers in the hostel bar, and also in Carpe Diem bar in Bratislava Square, which also had its own special march through the streets that day, as was tradition in the first weekend of September, this was 2008. After those chilled beers it was time to do a traditional GAWA march to the stadium, this is when all Northern Ireland fans walk together singing drinking and marching direct from the city centre to the stadium. It was a good 4 mile walk through the streets and the singing was loud and the sweat was dripping my green hair dye onto my 1998 era Steve Lomas white and red checkered Northern Ireland tap. 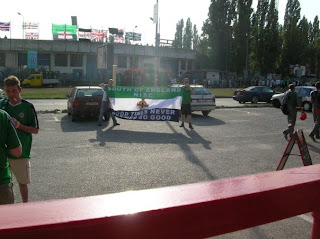 The march to the stadium featured just one beer as during the 4 miles there was no time to stop, the kick off was about 2 hours away, on this march I did manage a piss stop, and Tim Beattie and I proudly marched with the SOE NISC fleg hoisted up for the most part, plus a young lady to my left got her breasts out – a Northern Irish girl. There is something sexually uplifting about girls in football tops that makes me horny. The sun continued to beat and the Bratislavan police had kindly stopped the traffic for us for the afternoon, as had happened in Poland also back in 2005. There are not many countries in the world whose supporters behave impeccably on a march through the city centre, and whose march is so vociferous, colourful and lively. It certainly is a joy to be part of the Green and White Army. 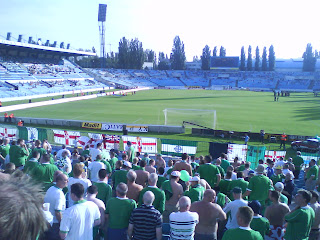 We turned a corner at one point, back to where we had got off a bus from the main airport earlier that day, and it was clear we were close to the stadium. Once we saw the stadium, we were still about an hour before kick off and the stadium was massive, if typically run down as is the norm in former communist eastern europe. So there was me, Tim, Gavin McClelland, Andrew Webb, Dave Watson and Colin Bowles. I think that was all the ones in our group, though Lee and Richard and Skin had joined in the march with us, but we split once we joined a queue for the pub opposite the stadium at Inter Bratislava. It was a nice wee bar, packed out at the front, but inside there were only 2 or 3 Chinese style staff! 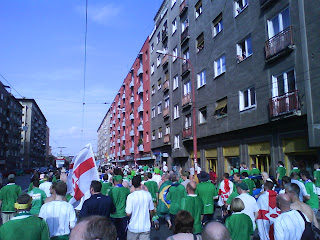 I dont think they were ready for us, suddenly nobody wanted any soft drinks or food (which is presumably what they normally sell) and everyone was ordering beer by the pint, between 3 and 10 per round. The queue took a wee while, but the Chinese guys got it sorted, and soon we were all sitting with a pint of Zlaty Bazant out in the front beer garden opposite the stadium. Talk was all about Worthington’s tactics and team selection. We knew we had the players to win it, and Slovakia really were there for the taking. Even with Northern Ireland’s abysmal away record, I expected our strikeforce of Healy, Feeney and Paterson to gun Slovakia down nice and early. 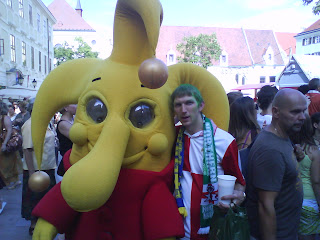 A very bizarre 4-5-1 tactic was played by Nigel Worthington on the day, with Burnley striker Martin Paterson playing on the left wing. The whole situation had echoes of Latvia away in 2007. A trip I remember very little of, except for it was 0-0 at half time and a stupid Chris Baird own goal gave them a 1-0 over us. We had decent seats in the stadium, got the fleg up in a nice spot up at the back, and laughed our heads off at the lack of support for the home team. This stadium was massive – must have been able to hold about 22,000 fans and yet there were less than 6,000 Slovakians. Even our singing was a bit quieter than normal as we chanted “4 – 4 – 2” at Nigel Worthington in an attempt to let him know that playing hero David Healy up front on his own is never a good tactic. He’s too small and will be too well marked if he’s on his own. We needed a 4 – 4 – 2 formation, but by half time we had hardly mustered a decent chance, though Healy did fire wide. Half time chat was still relatively optimistic, I was sat next to Gav and we believed a wee 1-0 away win wasn’t out of the question… 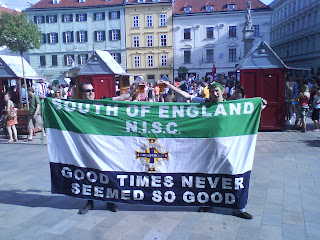 But disaster struck with a free kick to Slovakia mid way through the second half. Still playing a ridiculous formation, and with central midfielder Sammy Clingan being forced to play right wing (seriously Nigel??), he was literally on the “starboard bow.” I found that quite amusing, as at the time I was working for Wightlink as a steward on ferry boats, and the Star Wars song “Clingan’s on the starboard bow!” fitted well. Even though they scored an easy header from a free kick to make it 1-0. It looked to be game over for our team. Even the vein late efforts of workaholic Warren Feeney weren’t sparking us off, and in an awful typical Norn Iron second half performance, we ended up conceding a second goal. I cant remember how or why and I don’t want to recall it. There I was a year on from the Latvia Riga 1-0 defeat, head in hands in similar fashion so upset at my country being 2-0 down. We sang some words of support, and did manage a late consolation to make the score more respectable at 2-1, but in the closing minutes I felt sick, lost and pissed off in an unknown suburb of this Slovakian capital city. Defeat was hard to take, but admittedly on the night we didn’t do enough. 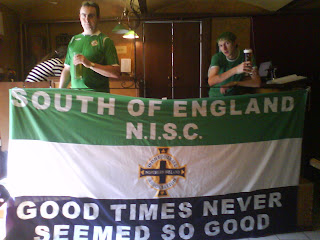 As I often do in the aftermath of defeat, I started to walk back alone to the hostel, and didn’t particularly care where the others from Bangor and SOE NISC had gone. I was sad, and I became sick as well. It was lucky i bumped into Lee, from Bangor, who I had only met that day in the hostel as he picked me up, waited for me to actually be sick by the roadside, and we walked back chatting and ending up with burgers and lemonade in McDonalds. Lee was another Northern Ireland nut like me, and as such was booked on a late train to Prague, so we popped back into the hostel very briefly for him to pick up his bags, before heading off into the night to the Czech Republic. In the meantime I met Paxter and Bangor Boy and had a beer with Colin and Gavin in the hostel, having perked up a little bit. I rested there on my own for a while, in the darkening heat as a wondering new eastern sky bore down on my Northern Irish mind. I gave myself half an hour, before heading back out to meet the guys again. But a few hours later I was back in the hostel in bed, and tired of Slovakia. 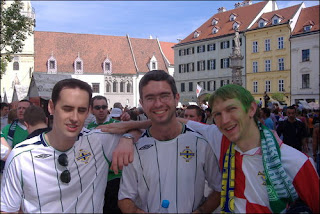 I actually loved the city of Bratislava, it is so eloquent, worn and beautiful. Yet the result put a dampener on the weekend. It wasn’t so bad the next morning, as I did the touristy walk by the river Danube, some lovely buildings, and caught a tram then a bus to the airport. I was truly down and out in Slovakia…

Durica’s own-goal gave Nigel Worthington’s men hope but in the final minute Senecky pushed Feeney’s header over the bar and then McCartney saw his headed effort from a corner easily dealt with by the goalkeeper.