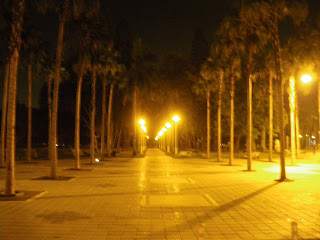 OK, so Tainan City was the former capital of Formosa. Formosa was the former name for Taiwan. This city was not one I’d ever heard of, ever dreamed of seeing or would ever have believed I’d be in. But there we were backpacking in Taiwan, Natalja and I, bang in the centre of Tainan City. Not by chance, but thanks to Eva Jun (my first and one of my latest Taiwanese friends), Neil’s mate. Eva works in a clothes shop in Shinying and lives in the nearby bigger and livelier city of Tainan. Basically Shinying itself can get quite boring, except the Thursday night markets, there’s not a lot of night life or character (this I should stress takes nothing away from the beauty and wonder of Shinying). So Eva has a mate who DJs in a club in Tainan, and she kindly invited us to the club last Wednesday night, from 11 pm ish. Clubs and bars here have fairly set opening times of 8pm onwards. No bars will be open before this. However the closing times change depending on how many people are still buying drinks. Once we knew we were heading to Tainan City that night, we thought it would be best to spend the day there, which we done, and I covered the “Anping” trip from Tainan as part of my previous blog post. 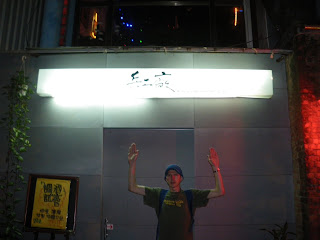 From Anping, Natalja and I dandered back into town, stopping for tea, and pork/chicken rolls from some kind of wannabe US Burger joint. Except these were much nicer, with Taiwanese salad inside, and different bread. After that it was dark already and we had a few hours to kill before meeting Neil and Eva at Tainan station. So we decide to look for a bar and go for a drink. Its hard enough finding bars in Taiwan, they’re not obvious, and often either:
– bunched together
– have a random “Heineken” sign dangling from the outside (don’t ask me why, but Heineken is the most popular imported beer)
– completely on their own with no sign to prove its a bar.
However we found a wee lane with some lights on and what looked like US style bars. We were right. There were about for bars there. We walked past one called “Hang Out”, turned around and for some reason decided to go in. Some of life’s big coincidences hinged on that decision we made. I cannot remember if it was me or Natalja who chose the bar, but in we went. Drinking in Taiwan isn’t popular, and is quite dear. Beers in Hang Out started at 100 Taiwan New Dollars, which is around £2 sterling, but these are smaller bottles, not pints. Natalja had a red wine in there. Its also weird, as the red wine is cold. They keep it in the fridge. IN this humid conditions and constant heat, maybe the Taiwanese have got it right – cold tea, cold coffee, cold red wine. 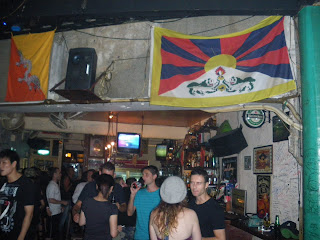 We sat at the bar in “Hang Out” and I noticed the mix of European/American influence in the bars decor. An East German “Hansa Rostock” football flag caught my eye first of all then images of baseball revealed its a sports bar which appeals to the non-Taiwanese residents of Tainan City. The female bar staff (a common thing here) spoke a little English and the menu was in English as well. Then I got talking to Klaus, the German guy next to me. He was from Stuttgart and a little opinionated, he even said he “hates germany”, which I found odd, given I’ve been there 4 times and love it! It also held interest for Natalja, who once upon a time lived in Germany, and the old city of Trier (a former German capital). Klaus was the first non-Taiwanese we’d met in Taiwan up to now, and it was nice to have the conversation with him. Before we had even agreed to go to Tainan, I remember Neil had originally wanted to meet in a bar called “The Rolling Stone”, which was near Tainan Park. Natalja and I still had an hour before meeting Eva and Neil, so we thought we should go there, I reckoned I should ask someone where the bar was. It was at this moment, that I randomly asked a guy walking past “Excuse me, you speak English dont you?” I had heard him speak English, playing darts a few minutes before. IT turned out he was Linton, an Australian from Sydney. MY second non-Taiwanese person. And from there 3 coincidences occurred. 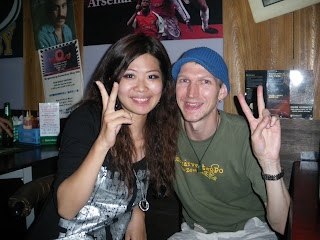 He asked where Natalja and I were from, and we said “Estonia” and “Northern Ireland”, then he bursted out with “my mate round the corner there is from Northern Ireland.” “NO WAY, surely not, and for him to say “Northern Ireland” and not just Ireland also meant something. I had trouble explaining to people I am from Northern Ireland, especially in Taiwan where they wouldn’t know the difference, some of them said “oh Ireland…”. And within seconds, Ricky had emerged. “I’m Ricky from Bangor” in a Norn Iron accent! Too surreal to be true. “I’m Jonny also from Bangor!” I said. To come all this way to Taiwan, then randomly end up in Tainan City, then randomly choose the Hang Out pub, then randomly ask a customer for directions to a certain bar, only to find an Ulsterman lurking! I was shocked and pleased. “We get around” I said to Ricky. Not only was Ricky from Bangor, but from Ballyholme, where I used to work in the butchery part of Steensons, and my local pub back then was “The Nad” (The Esplanade). It was also Ricky’s “local” and maybe I served him a sirloin steak one day in Steensons. Who knows? So on that note we hung around, got another drink and didn’t want to head to the Rolling Stone Pub. 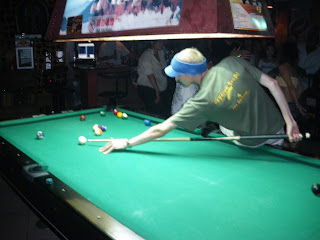 It was nearing 11 pm, the time I had said I’d meet Neil and Eva at Tainan train station, so Linton kindly offered to give me a lift on the back of his scooter. Scooters are very common here, they are everywhere. Its a cheap, easy and cool way to travel. This was my first Taiwan scooter experience. I loved it. The cool breeze and simple ride to the main station, 5 minutes maximum I estimate. Once there, we saw Neil and Eva and brought them all back into Hang Out bar, where we “hung out” strangely with 5 different nationalities in our group of 6, two of us being Northern Irish. When I thought life couldn’t get any more bizarre than that I was wrong. It turned out that Ricky from Bangor, used to be an english teacher at the very same school that Neil is now working at!! Unbelieveable. What a coincidence I’m thinking…but even stranger…he used to live in the same flat as Neil!! Flat 5B above a Dentist in Sanmin Street, Shinying. That to me showed how small the world is, and how totally bizarre the entire evening was becoming. Ricky and I later mentioned people we both knew, he was 4 or 5 years older but we had mutual “acquaintances” rather than “friends.” 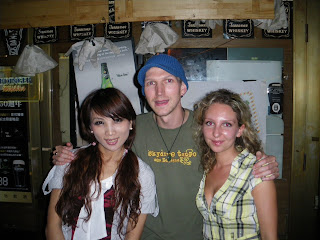 Eva called the shots and it was time to drink up and head to the club where her mate was DJ-ing. The club was the “Red Wolf” and was a very short walk away. Once in there we managed to secure a table, some beers and settled in to what was my first ever proper night out in Taiwan. Its probably the only time I’ll ever go out in Tainan City, so we had to enjoy it and savour the moment. The bar was busy and there were a few other foreigners around. Neil and I fancied a game of pool. The bar was small and tidy and has room for a pool table on the left as you walked in. Incidentally entry price was free. This sort of bar back in Northern Ireland would have cost us money. Beers were 150 New Taiwan Dollars. Pool was also free! So Neil introduced himself in Chinese to one of the guys on the pool table, a local lad called “Li”. WE decided to have a game of 2 vs. 2, which was UK v. Rest of World. LI was pretty good though, and they won in the end. The music being played was a real mix and I was quite surprised, not many Taiwanese songs at all! 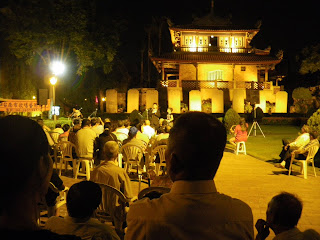 After a few beers in there, a few of us parted ways. Ricky headed home, by this point I’d already exchanged e-mail details from all of our crew that night. Li and his friends also went home, which left Neil, Natalja, Eva, Linton and me. We decided to head round the corner to another bar “The Armoury” for a final relax and beer of the night. It was already nearly 3 am. This bar was pretty crowded, but they had lots of free seats in the upstairs part and they also had randomly a bottle of “Guinness Export”, I thought I’d have to try that, which I did. It wasn’t the best, but nice to have a Guinness so far away from home. We just sat around in this bar and chilled out. Eva wanted to see Natalja and I again, and had that day off (the Thursday) so invited us to Tainan again, so we could go to the beach together, and see Tainan properly by day (that day we’d been in Anping) and the street market by night. We agreed to this and also that we should all head home soon. Eva and Linton both live in Tainan. Neil, Natalja and I had to bus it back to Shinying. Not before we got some free postcards from the bar, had a walk by the beautiful park (where no doubt I got bitten again, lots of itchy red bites all over me) and tried for a final drink in the Rolling Stones pub. But it was closed. So it was off to the bus station for a night bus back to Shinying and to rest our travelling heads, before our day trip ahead to the beach of the South China Seas and again the city of Tainan. 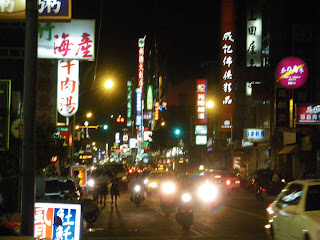 Transport Used – Train from Shinying, Scooter (on the back of Linton’s), Bus to Shinying.

3 thoughts on “Backpacking in Taiwan: Tainan City By Night…”