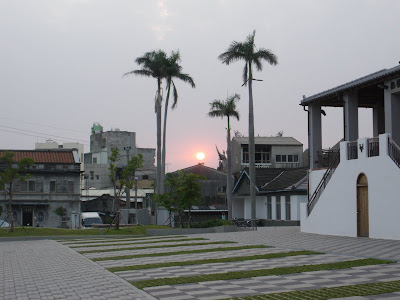 Sunset in Anping, backpacking in Taiwan

After backpacking through Chiayi it was time to head south and check out all the big/tourist places down there – Tainan, Kaohsuing, Kenting, Eluanbi which we’ve done in the last week or so. Neil and his friend Eva (from Taiwan) played a big part in our next move, as they invited us to a live music night in Tainan, the former capital city of Taiwan. The live music was at 12 midnight, so Natalja and I decided to spend the whole day doing Tainan, and in the end Anping , which in essence is just another suburb of Tainan, though it merits a separate entry, as I’ll detail Tainan in the next report from Taiwan. So the best bet was a train from Shinying to Tainan, and then head on a bus from Tainan station to the edge of Anping, which was by the sea and features a tree house, an old fort and a famous temple. 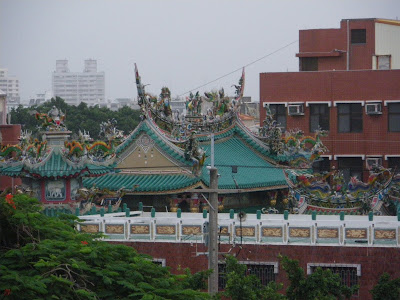 Neil had told us about a “free bus service” and that the ladies in the Tainan station terminal tourist information would speak a wee bit of English. They did, but sadly the free bus (numbers 88 and 99) were weekend only, which made sense as Neil has weekends off from his job, and there are less commuters around. Then it meant we would wait for 30 minutes or so for the number 2 bus. At the start we got on a number 2 bus and even paid for it (18 dollars or so), yet it was the wrong number 2 bus. The correct one finally arrived and we got a mini sightseeing tour round the city of Tainan before coming to the Tainan Canal and a long road leading out of town and to the small area known as Anping. If you’d asked me a week before where Anping was I’d not have had a clue. 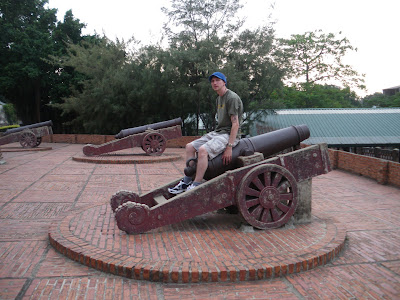 Once there I had the maps and guidebooks all ready, first we popped into the 7-11 for energy boost of Yakult drink, then we headed to the Dutch Fort, known as Anping Fort but formerly known as Fort Zeelandia. To get in was 50 dollrs each (one pound), and it was a strange place for a fort – nowhere near any water!! Thats because the tide in the area had gradually moved out and where once the forst was a lonely island, now it was the centre of the district of Anping, where people and their dogs happily cooked their afternoon meals in front of a fort, which was different to forts I’d been to before. It was white. It looked a bit prone to attack. It didn’t feel threatening to an enemy. But it was a fort to protect the area at one point. 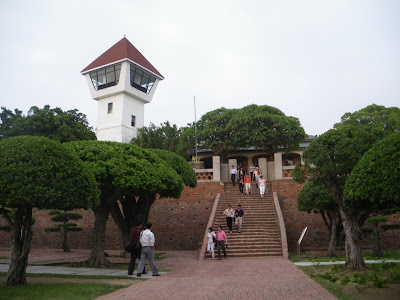 It was the Dutch who seized the area back in 1624 and established it as a fort and military base. Its been rebuilt a few times over the years but still maintains a noticeable presence. Built with red bricks and concrete leading up to the white tower of a centre pieace, infrequent cannons meet trees in a smoggy sky, which mixed war with nature in my eyes that day. The trees had beauty, one of them over 100 different TRUNKS, they led the way up the steps where we enjoyed the restricted view of Tainan (3 miles away) and the sea (South China Seas were right in front of us but the smoggy sky blurred it into nothing). 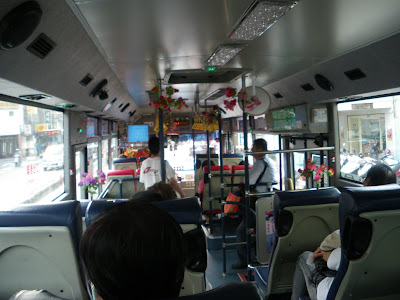 We climbed to the top of the fort, checked out the views and some of the history, which was in English. Its amazing how some of these places write the information twice – once in Chinese Mandarin, the second time in English. It was time to head back down from the fort, where Natalja and I were greeted by one of the finest sunsets I’ve ever seen. Squeezing its way through two palm trees and up from the fort’s foreground and entrance I snapped the sunset, though the image I’ve posted on here will never do it justice. In parts of Taiwan (Shinying and Chiaji for example) you cannot always see the sun, so this was a breath of fresh air. On that note it was time to leave the fort, one of those things you have to see if you’re in Tainan (please note this is not a mis-spelling, the city of Tainan is Taiwan’s old capital, there will be more posts on it…) 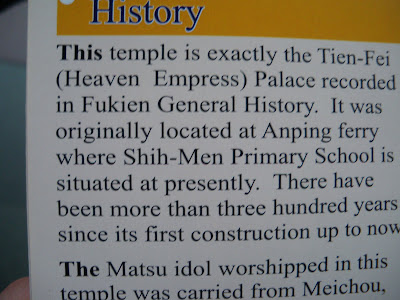 From the top of the fort I had counted 7 temples, they are everywhere in Taiwan, mainly the religion is Taoist, but secondly they have Buddhist temples. The largest one in Anping, and the most famous is actually a Mazu Temple, which is probably the finest temple I’ve seen so far in Taiwan. The official name of the temple is “An-ping Kai Tai Tien Hou Kung”, established in 1668, it is the oldest and earliest Mazu temple in Taiwan. Whilst simply standing in front of the temple’s guarding lions, a guy came over and gave Natalja and I each a pretty wee leaflet about the temple, its history and everything…all in English, though some of the translation is a bit dubious. Here’s some of the stuff from that leaflet (which I’ve kept):
AN-PING KAI TAI TIEN HOU KONG:
“This temple is exactly the first Tien Fei (Heaven Empress) Palace recorded in Fukien General History. The Matsu idol worshipped in this temple was carried from Meichou, Fukien Province of China across the sea by Cheng Cheng Kung, the Yen Ping Prefect of the Ming Dynasty in 1661.” 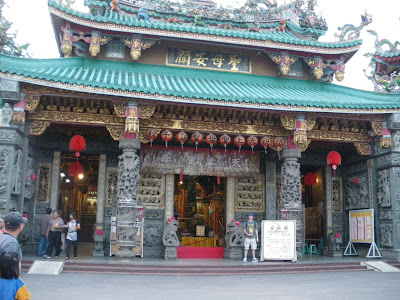 “In 1895, Japanese troops stormed into Anping and devastated this fishing village. It wasn’t until Taiwan’s restoration to the Chinese at the end of World War Two that the reconstruction became possible. The rebuilding project started in 1962 and was completed in 1975.”
THE CEREMONIAL ARCH:
“Ceremonial arch of an-ping kai tai tien hou kung is delicately carved appearing acquisition and magnificence.”
This acts as a partition bewteen the divine are and the secular world.
DRAGON PAIR GUARDING THE PAGODA:
On the eave of the main shrine, there is a pair of dragons facing a Pagoda, rather guarding the Pagoda. The higher the ornamental Pagoda, the higher the ranking of the temple. These Pagodas can be seen beside or on top of temples. Temples such as the Confucius Temple, Wu Temple, Singji Temple and Datianhou Temple. I have seen these Pagodas on quite a few other temples in the last 2 weeks. 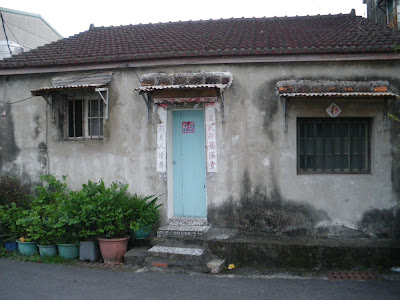 THE SWORD LION:
“Jian-shih (sword lion) is a common ornamental stuff in Anping. Almost all households in Anping have sword lions, usually in different materials but of the same design, hanging at the lintel or wall as safeguards. People of the Chinese descent are good at adopting images of precious animals as decorations for both esthetic purposes and auspicious functions. One of the most credible stories of the sword-lions origins is that it evolved from shields that bear a sword and knife. Back in the Qing Dynasty, Anping was the base for the navy. When naval officers went home, they’d hang swords and shields at doors to scare off bandits. Later on, hanging a shield at the lintel developed into a prevailing practice in Anping with local denizens using the sword lion as a safeguard stuff at their homes.” 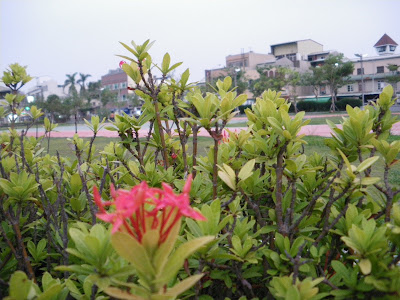 So we saw quite a famous temple and then dandered the streets, past lonely dogs, in the village of Anping which seemed very run down and lacking any happiness. Houses were downtrodden, and I felt sorry for kids who stared up at us as we walked by. Its a very basic existence in Anping. They cook, eat and live all in one room which is like a small shed, and open to the public and all sorts of vermin and insects. I was coping badly just as a visitor to Taiwan, with bruises and bites everywhere, but to live in this area would be something else. I photographed a few of the houses and side streets as we made our way back round the small village (via another temple) and to a park. 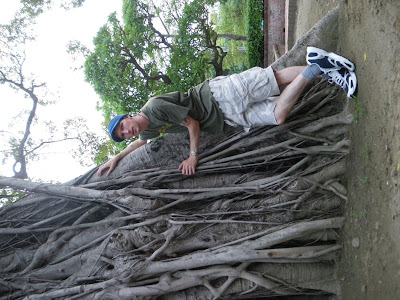 The park was where the bus had left us, on the corner of a 7/11. This type of shop, the 7/11 are EVERYWHERE in Taiwan, almost every street corner has a 7/11. Each city is loaded with them. They must have some sort of shopping monopoly here. There are no big supermarkets anywhere, simply small shops, night and day markets and…the 7/11s. They say in Taiwan if you want to arrange to meet somebody, never say to them “Lets meet at the 7/11”, the reason being of course that there are loads of them and you’d go to the wrong one…Anyhow the 7/11 on one corner and a park and athletics track right opposite. According to the wee tour booklet, and my lonely planet guide, there was a “merchant house and a tree house” to see in Anping, and it was on the other side of the athletics track. So we wanted to see that before we left. 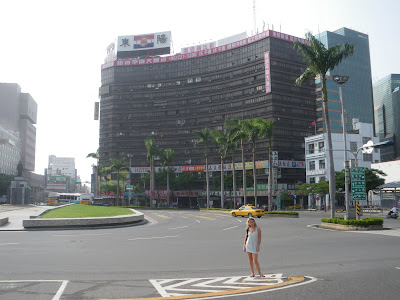 It had just gone 5 pm and it was closed, but we could see in and take some photos from the front, reading the information there. It held particular interest for me as the Merchant House was built by the British in 1867. Over the years, the Dutch, the British, the Chinese and the Japanese all had a part to play in the history of Anping. Inside the Merchant House is a permanent exhibition of all the artefacts from the 17th century. Its called “The former Tait and Co. Merchant House and Anping Tree House.” They stand beside each other in a garden. There were some nice trees on the way back, and from there Natalja and I decided to walk back to Tainan City. It would be a 3 mile walk, but we weren’t entirely sure of the bus times, or bus stops and a leisurely stroll along the Tainan Canal was relaxing before we would chill out in Tainan City where we were going to a live music night later with Neil, and Eva Jun, Neil’s mate from Taiwan who has been spending lots of time with us in the last few weeks and is helping Natalja and I get by in foreign lands. 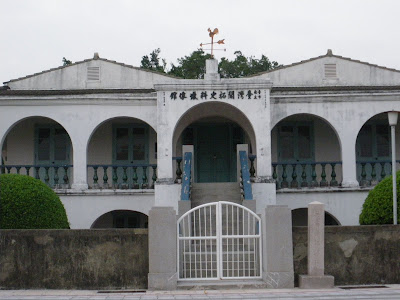