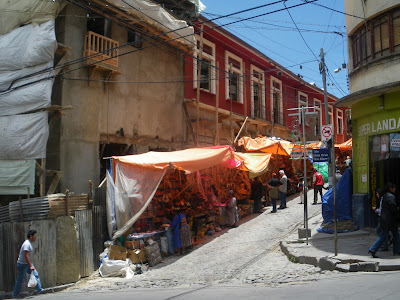 La Paz is a stunning city. Situated at an extreme altitude, and seemingly built endlessly in the middle of mountains, the city is also an extremely busy one. But one that oozes culture and ropes you in. I loved La Paz, and even stopped there twice on my trip round South America. A must visit in La Paz is the Witches Market. Known locally as Mercado de Hechiceria, this small market is situated on poky, steep streets near Santa Cruz. 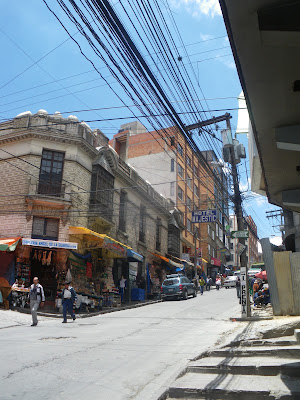 Santa Cruz street which itself is laden with many and various shops including a host of football shirt shops. 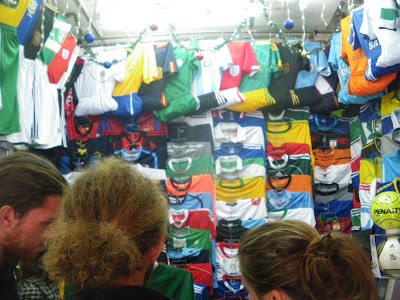 The football shirt shops. I checked for Northern Ireland, Bournemouth and Glentoran shirts to no avail. 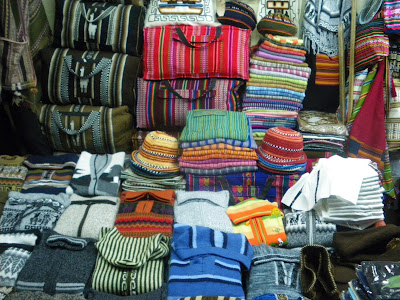 Clothes in Bolivia are cheap, colourful and well made. I stretched my budget to only a hat however, as my bag was laden with clothes as it was. A shopper’s paradise, and the woolen green hat that I bought cost me just 2 US Dollars. 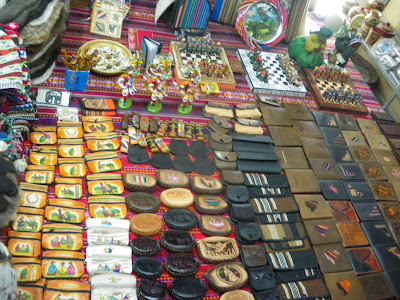 Purses, wallets, ornaments and chess sets amongst the countless nick nacks and souvenirs available. These types of things can be found everywhere in La Paz, but there are hoardes of them near the Witches Market. 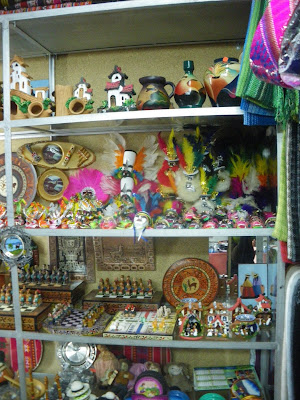 As a souvenir buyer, you can knock yourself out here, in the area near Plaza San Francisco – a large church sits there on the main road – Avenida Mariscal Santa Cruz (which runs into Avenida 16 de Julio – also known as el Prado). A lot of gifts. Bolivia is probably the most colourful nation I have ever been in. The locals are dressed flambouyantly in various colours, regardless of whether they are rich (or more often than not) poor. 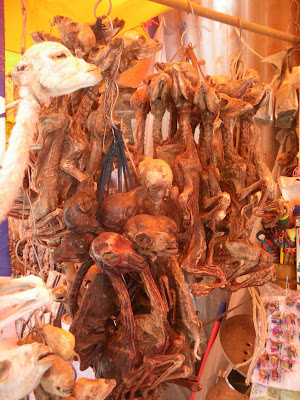 The first sign that we are actually in the Witches Market are these dead llama phoetuses. They are everywhere! Basically there is an old Bolivian saying that every house or home in Bolivia should have one of these buried under the porch or entrance. So people buy them and that’s what they do with them. 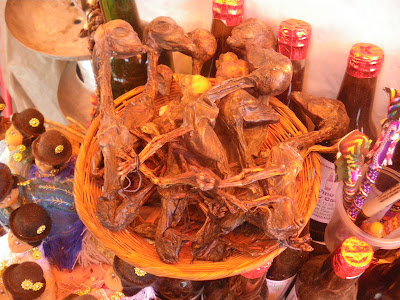 More llama’s phoetuses. They come in various sizes and shapes, as well as prices. They can be picked up for quite cheap. I didn’t touch them mind you! Witch craft and clair voyance are also apparent in the Witches Market. You can get your fortune told or hear something spooky. But mostly in Spanish. And mostly they only do these things for the locals. 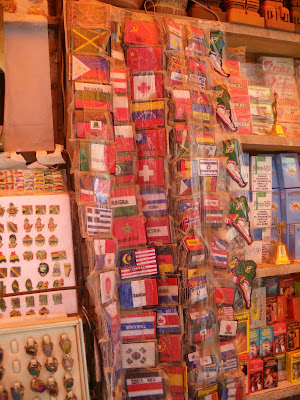 I collect a flag badge from every country or prominent place I visit. I picked up a Bolivia and USSR one here – had wanted the old communist USSR badge despite not having been to Russia pre Berlin Wall collapse. 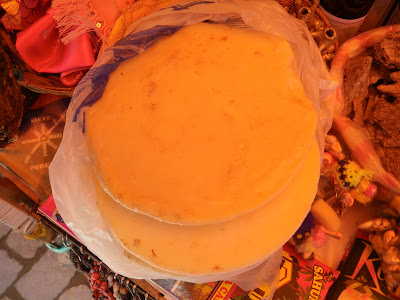 I actually cannot remember the story behind this stuff, but it’s traditionally Bolivian and was openly for sale here. 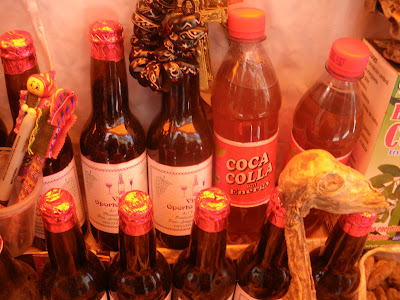 Wine and soft drinks, including the ridiculous Coca Colla – perhaps the biggest rip off or copy of all time, but one that makes sense given that Coca leaves are the second main ingredient, after water. 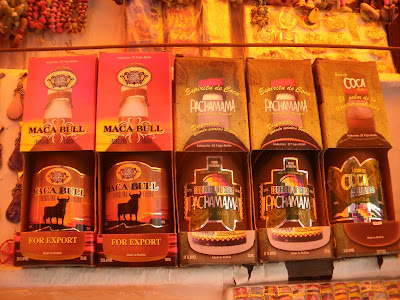 Bolivian liquers. Tried a few of these on nights out (Maca Bull and Pachamama). There is also one (far right) made from Coca leaves, but I stuck to Coca tea rather than its alcoholic counterpart. 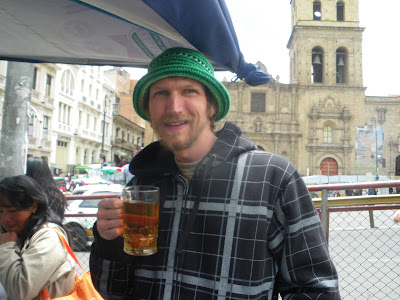 Wearing the hat I bought near The Witches Market in La Paz. This photo was taken by a street vendor opposite Iglesia de San Francisco. I relaxed there and sipped a hot clove/peach drink called mocochinchi. More information on this excellent drink here: http://www.boliviabella.com/mocochinchi.html 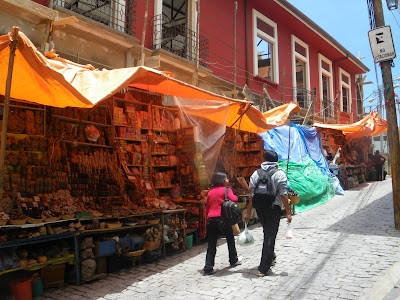 The day I was there was scorching hot and not too busy. I caught the Witches Market at a good time. I would totally recommend La Paz as a place to visit, and definitely a place for souvenirs. If I go back, I’ll be buying some cheap clothes!
What – Witches Market/ Mercado de Hechiceria
Where – Calle Jiminez and Linares (between Santa Cruz and Sagarnaga), Central La Paz, BOLIVIA
Transport Used – Walking of course – 20 minutes maximum from the hostel
Strange Currencies – Bolivianos and Centavos (often called Bs)
Nationalities Met – Bolivian (at the market that is)
Things I Bought – A green woolen hat, some flag patches, a few local drinks at the nearby stands including mocochinchi.
Key Song –
ACID WITCH – THE BLACK WITCH:
Key Films –
1. THE BLAIR WITCH PROJECT:
2. THE WITCHES (ADAPTED FROM ROALD DAHL):
A Few Website Links – http://www.sacred-destinations.com/bolivia/la-paz-witches-market
http://www.lonelyplanet.com/travelblogs/112/1721/The+Witches+Market+in+La+Paz,+Bolivia?destId=363126
My Videos –
LLAMAS PHOETUSES AND CONVERSATION WITH MARKET STALL SELLER AT WITCHES MARKET, LA PAZ, BOLIVIA:
DRINKING FRESCO MOCOCHINCHI IN CENTRAL LA PAZ:
Join 15,017 Monthly Readers! If you enjoyed this article and LOVE travel and SAVING money, get e-mail updates from Don’t Stop Living – a lifestyle of travel! (It’s Free) 😉 Jonny